The home is now the ultimate entertaining space for the owners' family and friends. 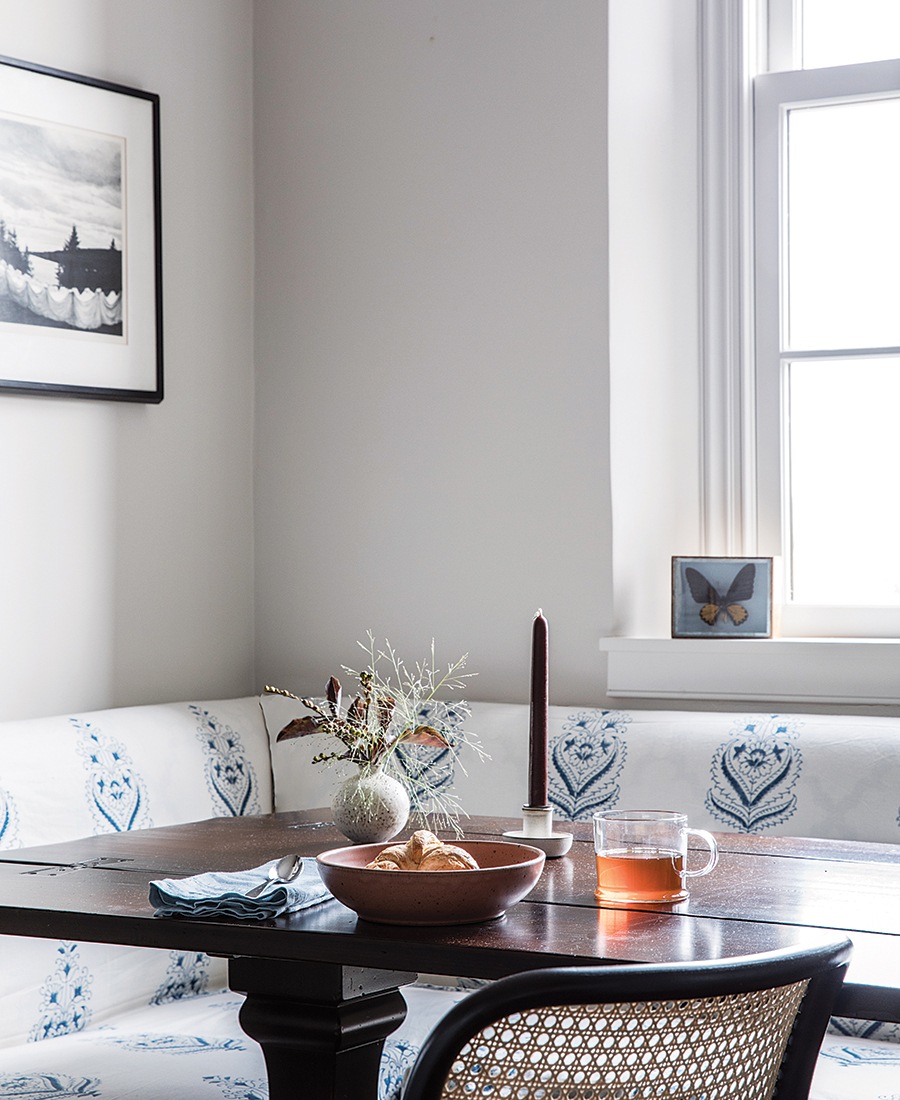 Wrapped in a block-printed Les Indiennes fabric, a freestanding banquette from Ballard Designs offers seating for the kitchen table. / Photo by Erin Little

From the moment she stepped into her clients’ two-bedroom condo in the Back Bay, interior designer Kelly Healy knew the ornamental pillars framing the living room had to go. “There was this amazing view of the [Charles River] and the Cambridge skyline—and these unnecessary pillars blocking it,” she says, still incredulous.

The owners, who raised their children in Medfield before moving to Dover and later Sarasota, Florida, had purchased the 1,890-square-foot pied-à-terre in 2016 so they could spend summers and occasional weekends visiting their grandchildren. They initially contacted Healy, founder of Ipswich-based firm Belhaakon, about simply repainting the unit, but decided to go all-in once they heard the designer’s ideas for the living room and beyond. Her vision? An entertaining-friendly retreat with “jewel tones, light streaming in the windows, and an intense boldness that reflected the wife’s personality,” Healy says.

With the couple’s blessing, the designer kicked off the transformation, teaming up with contractors at Modern Heritage on a full revamp. Naturally, the living room (and the removal of those pesky pillars) was a top priority. But the work didn’t end there. Given the condo’s landmark views—which, in addition to the Charles, include the Bunker Hill Monument and the Prudential Tower—the couple asked the team to focus on the room’s 11-foot-wide Juliet balcony, envisioning an accordion door that could be fully opened for a Fourth of July event. Mission accomplished. “We were watching the fireworks when we got the call that our first grandchild was born!” the wife says. 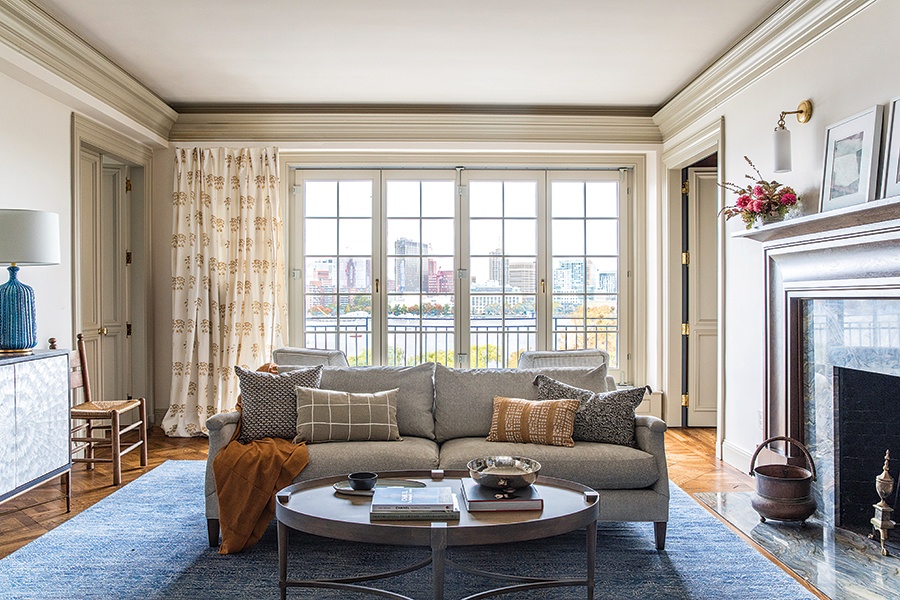 The homeowners have morning coffee in the recliners behind the sofa in the living area, where the prior residents had a dining table. “We enjoy entertaining, but didn’t need a formal dining table,” the wife says. “The city of Boston is our dining room.” / Photo by Erin Little 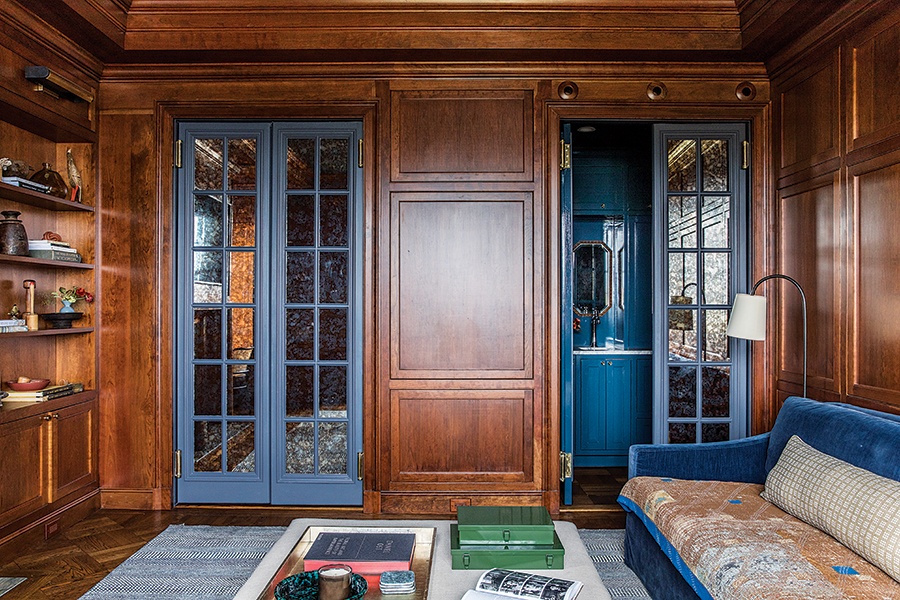 In the library, a vintage quilt and a Kelly Wearstler lumbar pillow lend personality to an RH sleeper sofa. / Photo by Erin Little 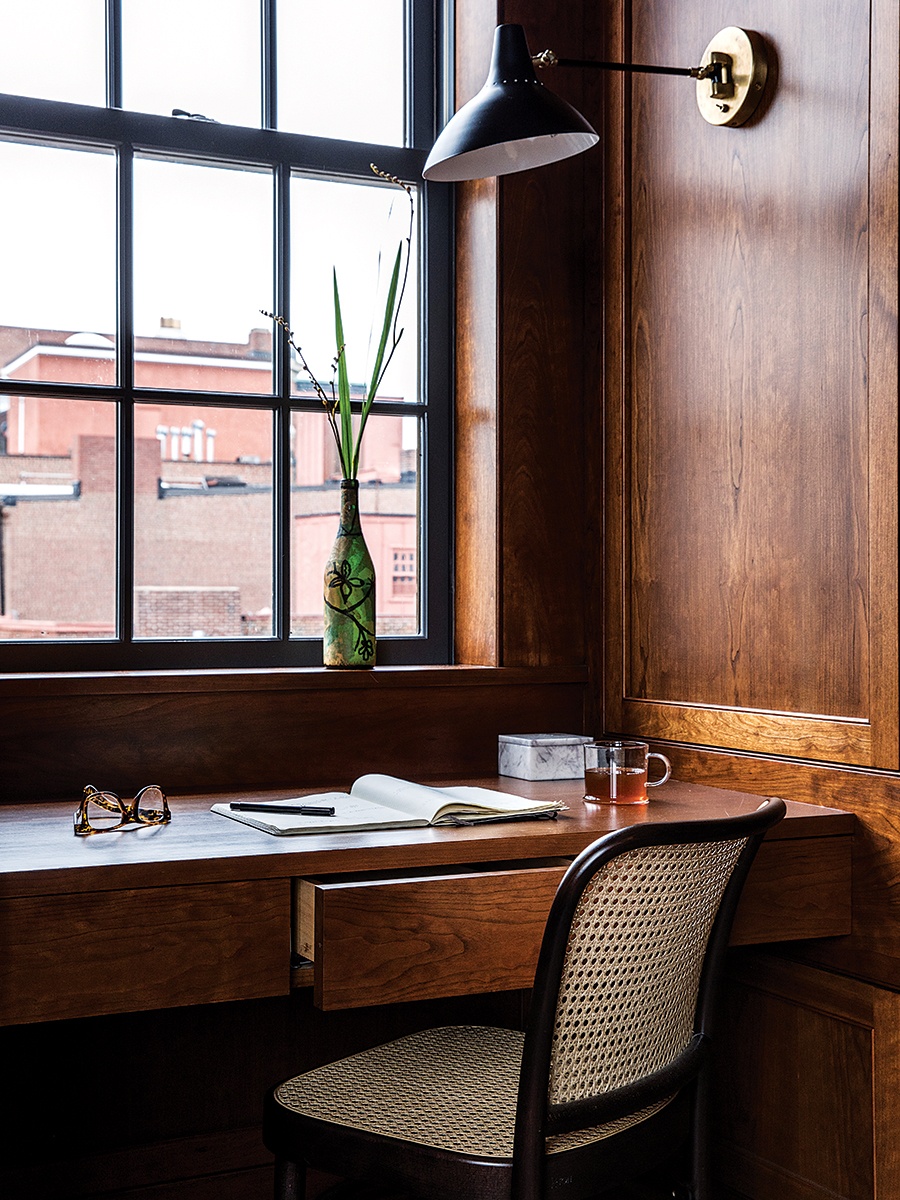 Healy collaborated with Andrew Brewin at Modern Heritage on the design for the cherry millwork in the library. / Photo by Erin Little 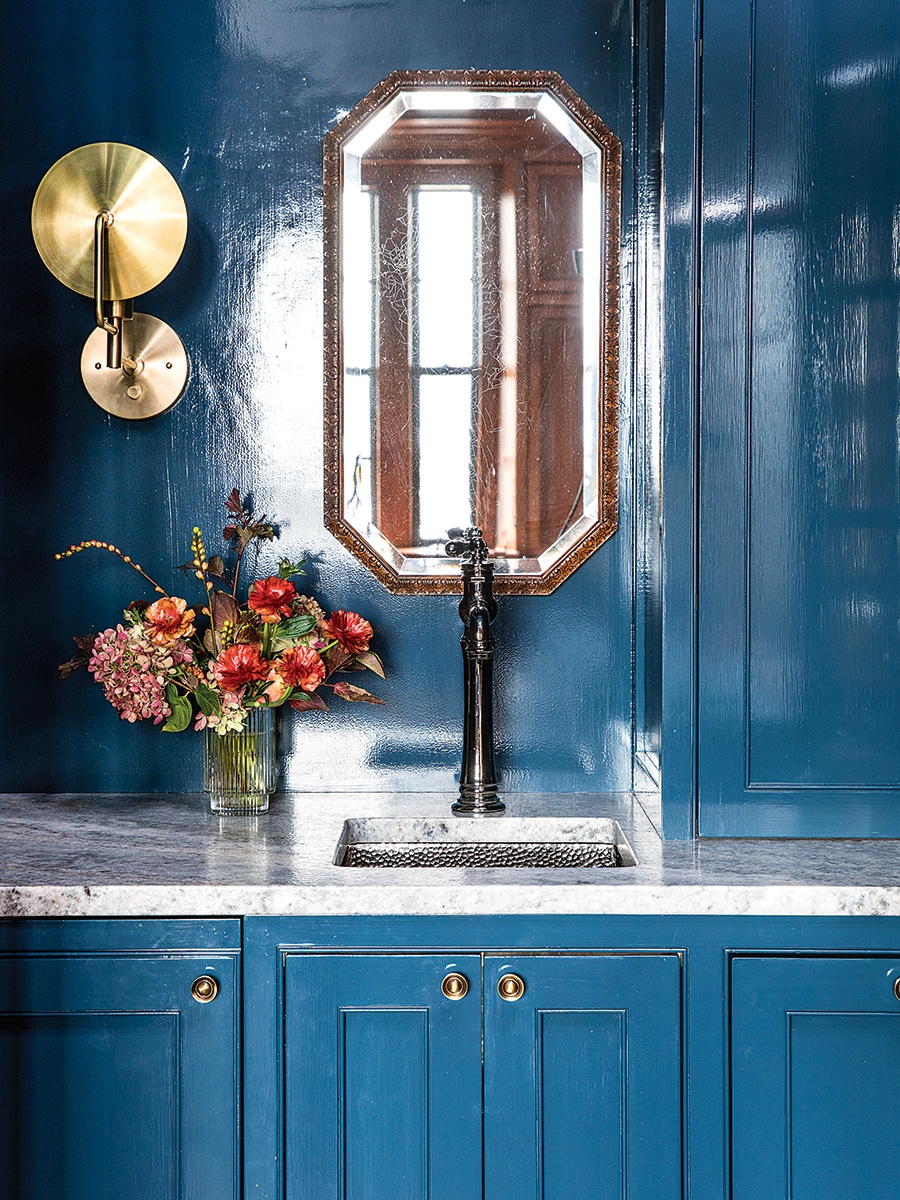 A modern interpretation of an early American candle sconce that speaks both to the building’s history and the clients’ current-day tastes, a Workstead sconce illuminates the wet bar in the library, painted in Farrow & Ball’s “Hague Blue.” / Photo by Erin Little

Healy also reworked the living room’s fireplace so it could hold its own beside the new, folding-glass door. She paired a substantial walnut mantel with a dramatic blue-and-white stone reminiscent of river waves, which she also used for the fireplace in the adjacent library. Drapery made from a Les Indiennes block-printed fabric that Healy calls “perfectly imperfect” softens the formal architecture, while other global textiles offer a relaxed feel, per the client’s request. “I wanted it to be comfortable and inviting, but not seem generic,” the wife says.

One room over, the husband steered the design of the library, asking Healy to fulfill a long-held desire for a wood-paneled study. “He envisioned a Back Bay–style library where extended family could watch Patriots games and mix a cocktail,” says the designer, who worked with Modern Heritage on custom millwork for the space. To accommodate the husband’s work-from-home needs, the team tucked a desk with a cleverly disguised compartment for the computer monitor under a window. “You don’t want to feel like you’re entertaining friends in your office or TV room,” Healy reasons.

For all of its stateliness, the library feels approachable. The blue-velvet sofa is entertaining-ready but also cozy, thanks to the vintage kantha quilt Healy spread across the seat cushions. The designer explains that such layers keep a space from seeming overdesigned, while also encouraging clients to add their own touches. In this case, the husband incorporated the well-worn leather chairs from his former study in Dover. “They looked over the Charles River there, too,” the wife says.

Smoked antique-mirror doors lead from the library to the eat-in kitchen, where the wife says she could easily cook Thanksgiving dinner, despite it being much smaller than her previous suburban space. The layout stayed the same—rerouting the plumbing to place the sink under the window with the view of the Bunker Hill Monument was too involved—but everything else is brand new, from the inset-panel cabinetry and the blackened-copper hood to the concrete sink and the brass faucet. 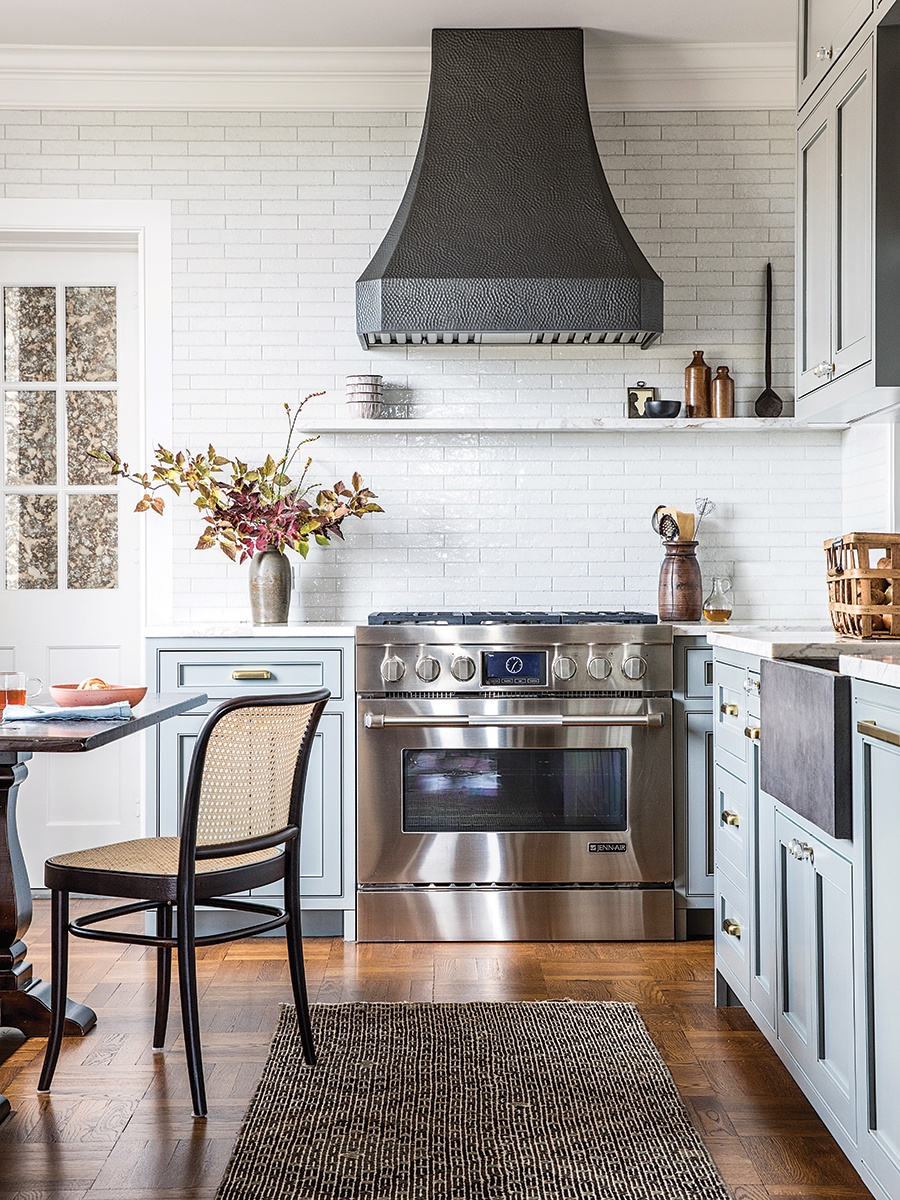 A blackened-copper hood plays off the glossiness of the kitchen’s handmade ceramic tiles, sourced from Discover Tile. “I’m not a ‘perfect tile’ person,” interior designer Kelly Healy says. “I like [it] to have movement and personality.” / Photo by Erin Little 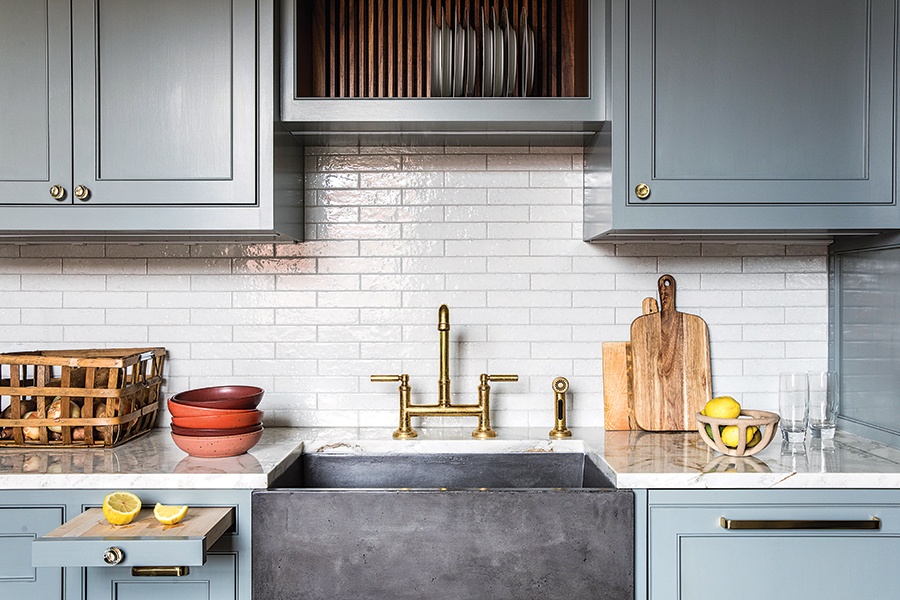 In the kitchen, custom cabinetry painted in C2 Paint’s “Portland” includes a solid-walnut plate rack and a pull-out cutting board, fashioned from oak. A Kallista brass faucet, meanwhile, sparkles against the concrete, apron-front sink from Native Trails. / Photo by Erin Little

Meanwhile, to the left of the kitchen, on the other side of the living room, the unit’s two bedrooms also sport fresh looks. Healy reconfigured both rooms and gutted their respective baths for better flow. The guest bath, for instance, is now an en suite instead of opening into the hall, and the guest-bedroom closet boasts wooden doors repurposed from the closet in the primary bedroom. “[I heard] the prior owners brought them back from their travels,” the wife says.

In the primary bedroom, meanwhile, Healy relocated the closet so the couple’s bed takes advantage of the river view. The new, walk-in closet now connects to a bath featuring a fluted vanity and Ann Sacks floor tiles with shiny, bronze detailing.

Charmed by Healy’s redesign and all that the city offers—fireworks, restaurants, proximity to her family—the wife refers to the transformed apartment as her Boston flat. “I love that she thinks of it that way,” Healy says. “I wanted to make it exciting for them. It was about creating a place they would be proud of.” 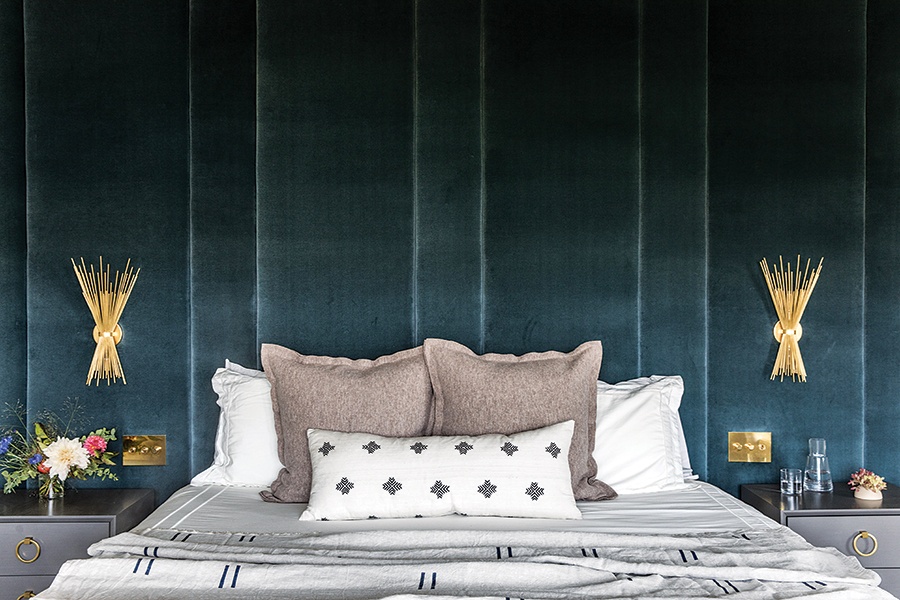 In the primary bedroom, a channeled, blue-velvet headboard covers most of the wall, punctuated by gilded Kelly Wearstler sconces. Healy balanced the scheme with a hand-printed linen blanket by Caroline Z Hurley and mushroom-colored, boiled-wool pillow shams. / Photo by Erin Little 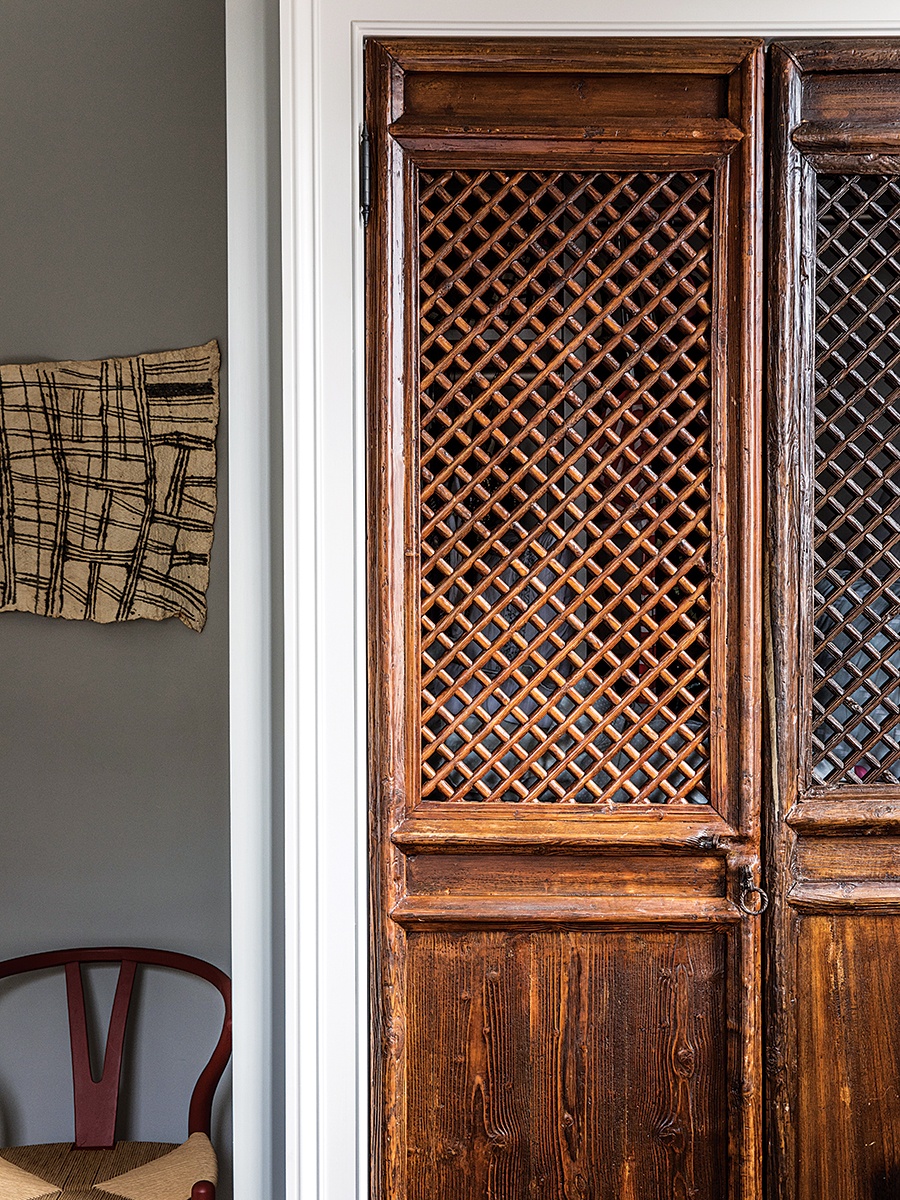 An African textile that Healy found years ago at the Brimfield Antique Flea Market hangs next to the closet in the guest bedroom. / Photo by Erin Little 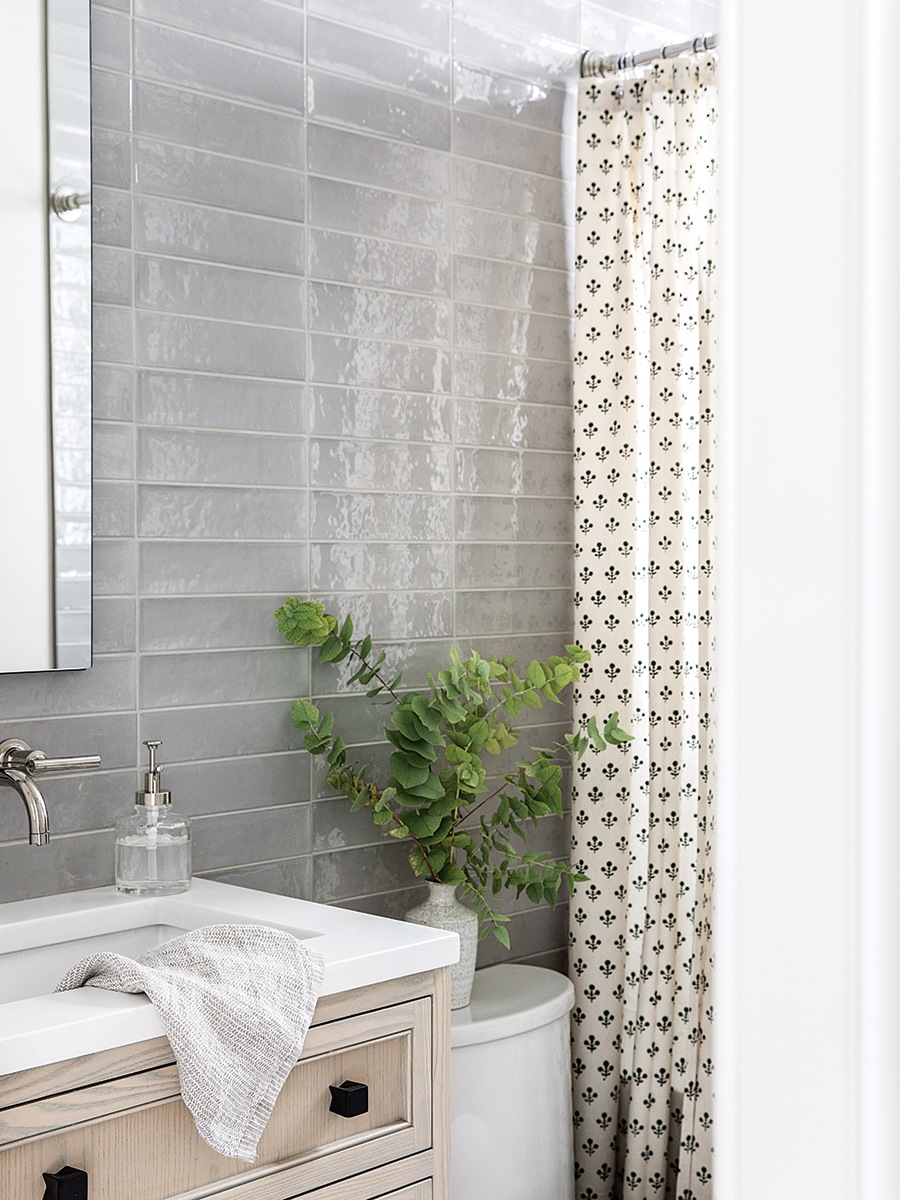 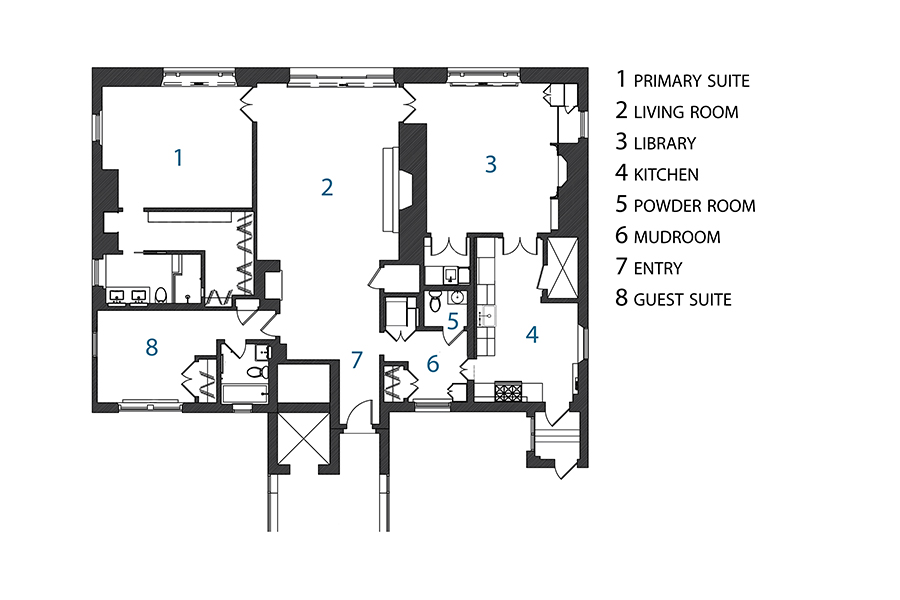