Here’s Your Chance to Own (And Restore) A Geodesic Home

This peculiarly-shaped home in Westminster comes with 28 acres of land and one tiny catch. 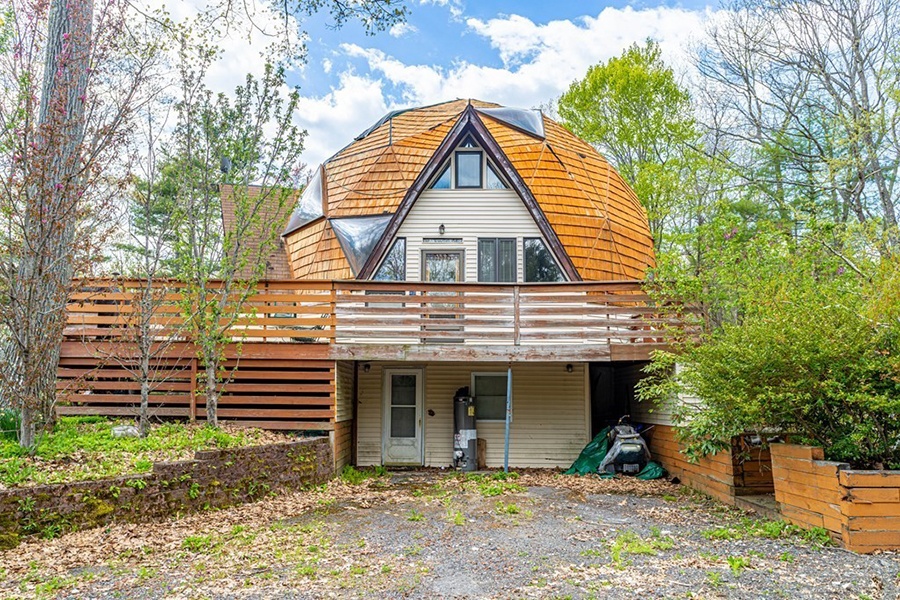 Living in a unique house sometimes comes with a price beyond your monthly mortgage.

That’s what Dennis LaTorre found when he and his sister purchased a geodesic dome home in Westminster 22 years ago. This spherical house, designed by Monterey Domes of California, is meant to be energy-efficient and withstand natural disasters.

It’s all part of the vision behind the geodesic dome concept, which was dreamt up by architect R. Buckminster Fuller in the 1940s. Fuller was trying to make homes not only more efficient and durable, but more readily available to people of all economic statuses. His new homes could be produced quickly and with the same equipment used to build wartime airplanes. Thus, the geodesic dome was born, making its mark as one of the most unusual architecture styles to come out of the twentieth century.

LaTorre’s sister was drawn to the shape when it came to buying the home. And how could you not? In a world of rectangular houses, the geodesic home’s spherical structure relies on interlocking triangular facets to form an exterior shape that inspired the likes of the Epcot’s iconic Spaceship Earth (or, as you may be thinking of it, the “giant golf ball”). But the uncommon shape of the house means maintenance is tricky. Roof leaks were common and difficult to repair for LaTorre. After over two decades, he’s had enough.

“It’s a nice neighborhood and everything,” he says. “It’s just too much.”

The home, designed by Monterey Domes of California, is now on the market for $1 million, offering the new buyers a crack at the 28-plus acre property and the chance to restore the 1,828 square foot home to what it once was in its heyday. But it undoubtedly needs some work, particularly on the roof.

But those who like a challenge may be in luck if they want to restore this two-bedroom house. Geodesic homes, while rare, are not totally unheard of in Massachusetts. MLS data over the last ten years shows a handful of the structures scattered throughout the state, many of them relics of the seventies and eighties. And while they may be a bit of a project, they can be tweaked: just ask Evan Hardcastle, owner and manager of  377 Builders.

Hardcastle got to try his hand at reviving one of these homes a few years ago, working with interior designer Jess Cooney to revive a geodesic home out in Becket back in 2019. The work there was limited mostly to updating the dated interior, including replacing carpeting and a hot tub in the bedroom. The biggest challenge was adding drywall without disrupting any of the exterior pieces. An engineer helped advise on how to best go about it to avoid cracking.

Hardcastle compares geodesic domes to bubbles. If a bubble lands on a surface and you press down on it without popping it, the pressure changes its entire shape. That’s what working with geodesic homes is like; builders have to take care that any interior structural work doesn’t affect the exterior. And future dome owners should be warned: If you’re interested in buying the two-bedroom Westminster dome, its rare shape means work can take longer since any flooring, baseboard, and other decorative trim has to be adjusted to fit the angles of the house.

Otherwise, the work, Hardcastle says, was like any other house. And while the work was a challenge, he firmly believes it’s possible to thrive in one of these peculiar homes.

“It is a unique structure and it’s not common to find people who just do these,” Hardcastle says. “We definitely underbid the time things would take because of angles. If you’re going into a purchase like that, you’re buying it because you like the shape. If you like the shape, it’s well worth doing. But if you don’t like the shape, it’s an impossible task to change what that is. You have to be in love with style.”

Listing agent Kurt Thompson says the new owner if the Westminster home may also want to consider demolishing the house altogether, given the issues with it. The 28-acre plot is developable—the property can be subdivided, offering the chance to use the land instead to build much needed housing within a short drive from shopping, amenities and Route 2.

“It’s a great opportunity for someone that is looking for either privacy, but with access to area amenities, or a developer looking to build a high-density development,” he says.

But choose to save this home instead and you get not only a totally unique place to live, but an outbuilding that serves as a guest house and a heated garage that has enough space to house multiple cars. It’s a bit of a fixer-upper, but the bragging rights? Those are priceless. 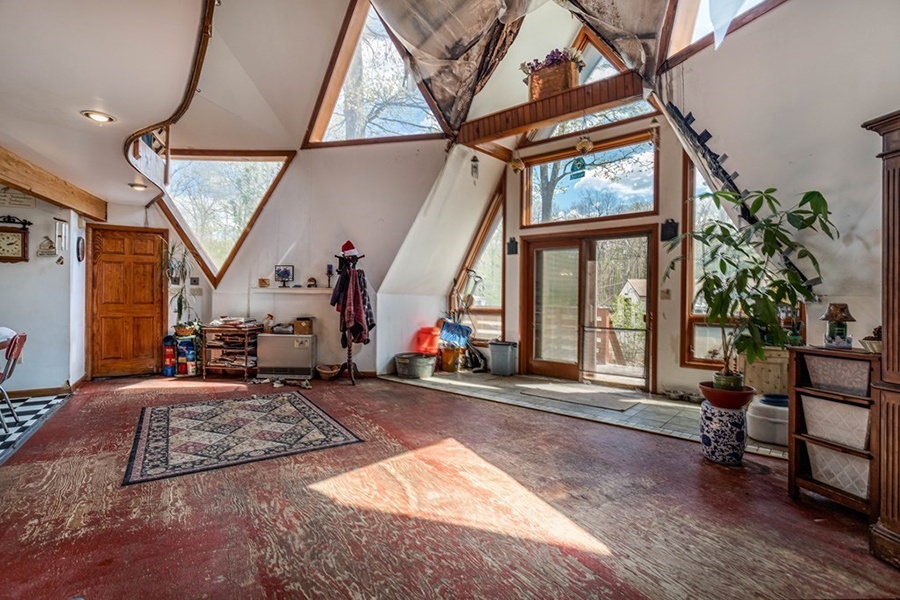 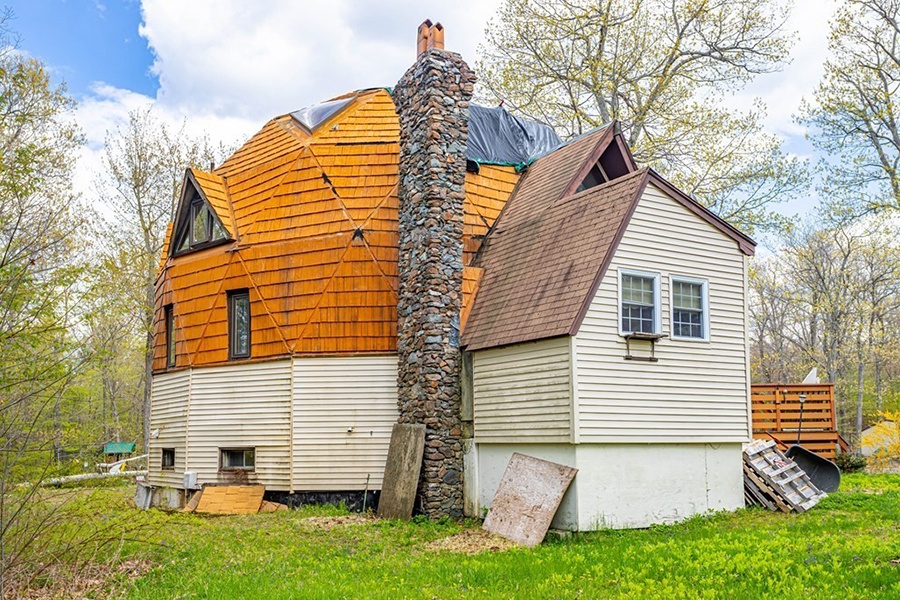 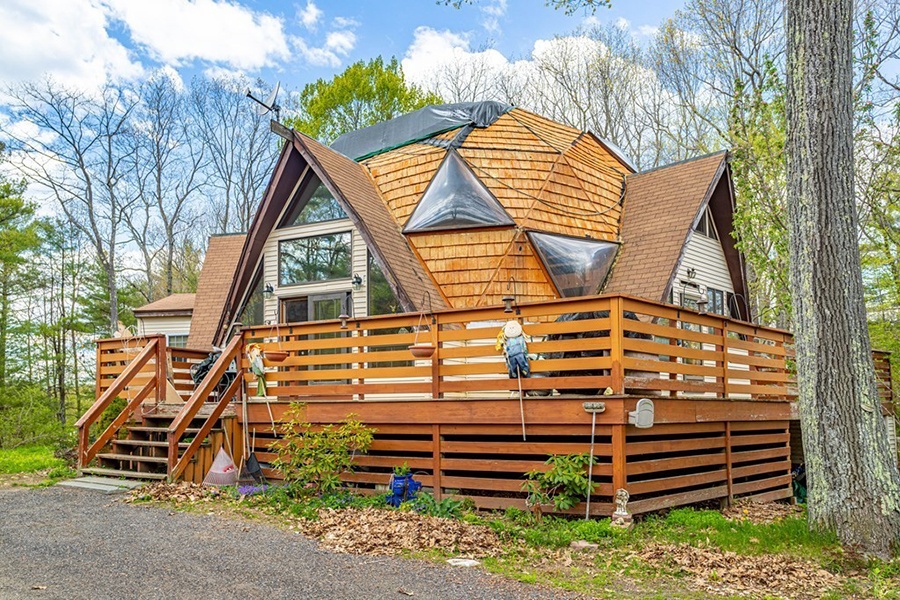