Which includes prints by Cig Harvey, Alex Prager, and more. 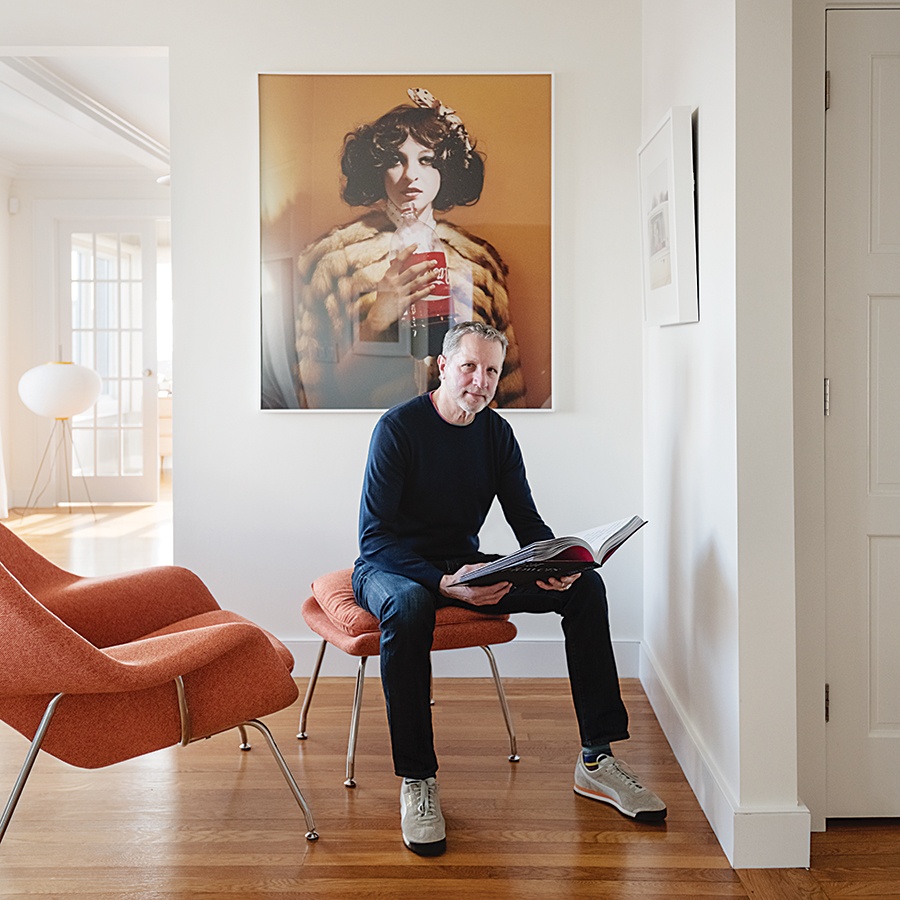 Gary Leopold’s position in public relations at Sonesta International Hotels in the early 1980s kickstarted his appreciation for art. “[Hotel president] Roger Sonnabend and his wife were huge collectors,” Leopold explains. In addition to outfitting the hotels’ guest rooms and public spaces with original modern art—a notable feature that Leopold was tasked with promoting—the company commissioned artwork for its annual holiday card, along with 500 signed reproductions of the image that they gifted to clients and key employees. “I started to develop a nice collection from those,” Leopold says of the original prints, some of which hang in his Cape Ann home today. He was also able to choose pieces from Sonesta’s collection to hang in his office, a practice he implemented when he launched his own firm.

As Leopold’s collection took shape, he concentrated primarily on photography. He and his wife, Kim Colombi, try to attend the Paris Photo art fair each year, often tacking other art-centric European cities onto their trip. “We love walking that show, looking at the work, talking about it, and connecting with the artists,” Leopold says. “Each piece you acquire has a story that gets rekindled every time you look at it,” he notes. “That’s part of the beauty of collecting.” 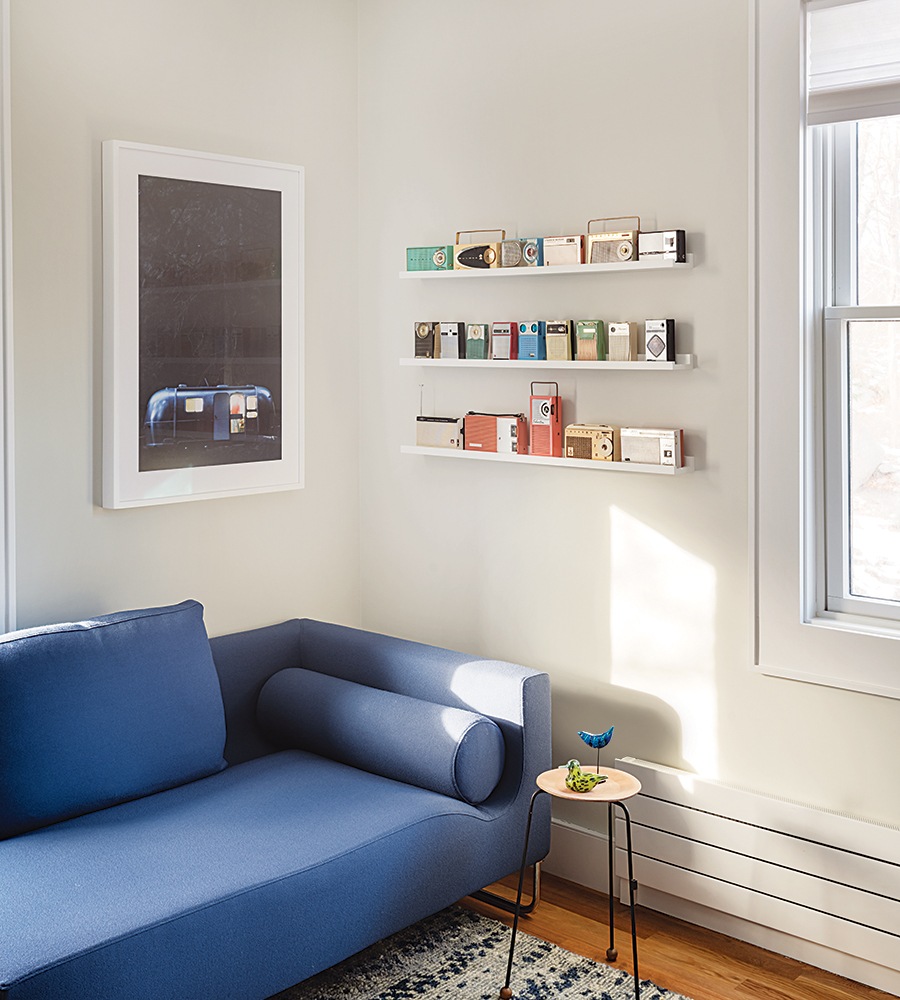 To better align with his wife’s minimalist aesthetic, Leopold pared down his collection of vintage radios (he used to own large Bakelite ones, too). Small transistor models from the 1950s and ’60s are displayed alongside Mayne Island by Olivia Bee, which pictures a camper that looks as though it hails from the same era. “I love industrial design,” the collector says. / Photo by Matthew Williams / Styling by Kate C. Sheppard/Anchor Artists 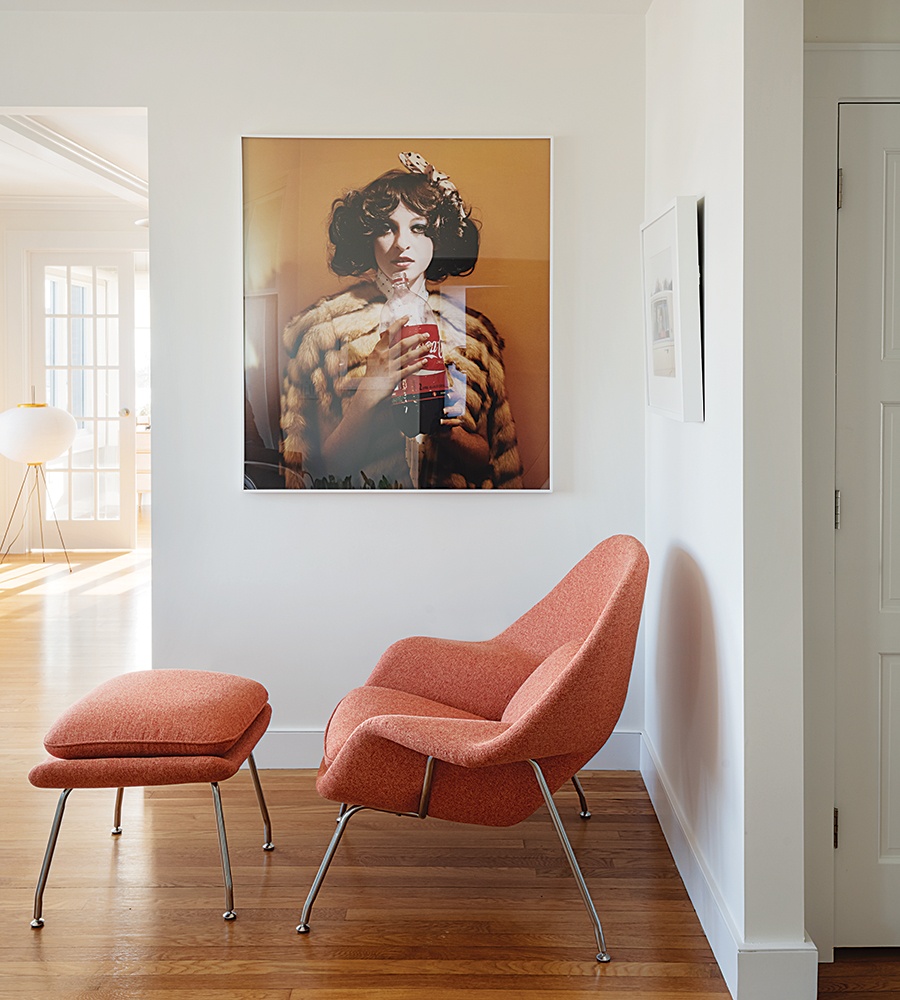 Leopold acquired his first Alex Prager photograph after running into a friend at the Association of International Photography Art Dealers show in New York City, who suggested he check out her work. The pieces were selling quickly, Leopold says, but he was able to snag a large, early edition print at a good price. / Photo by Matthew Williams / Styling by Kate C. Sheppard/Anchor Artists 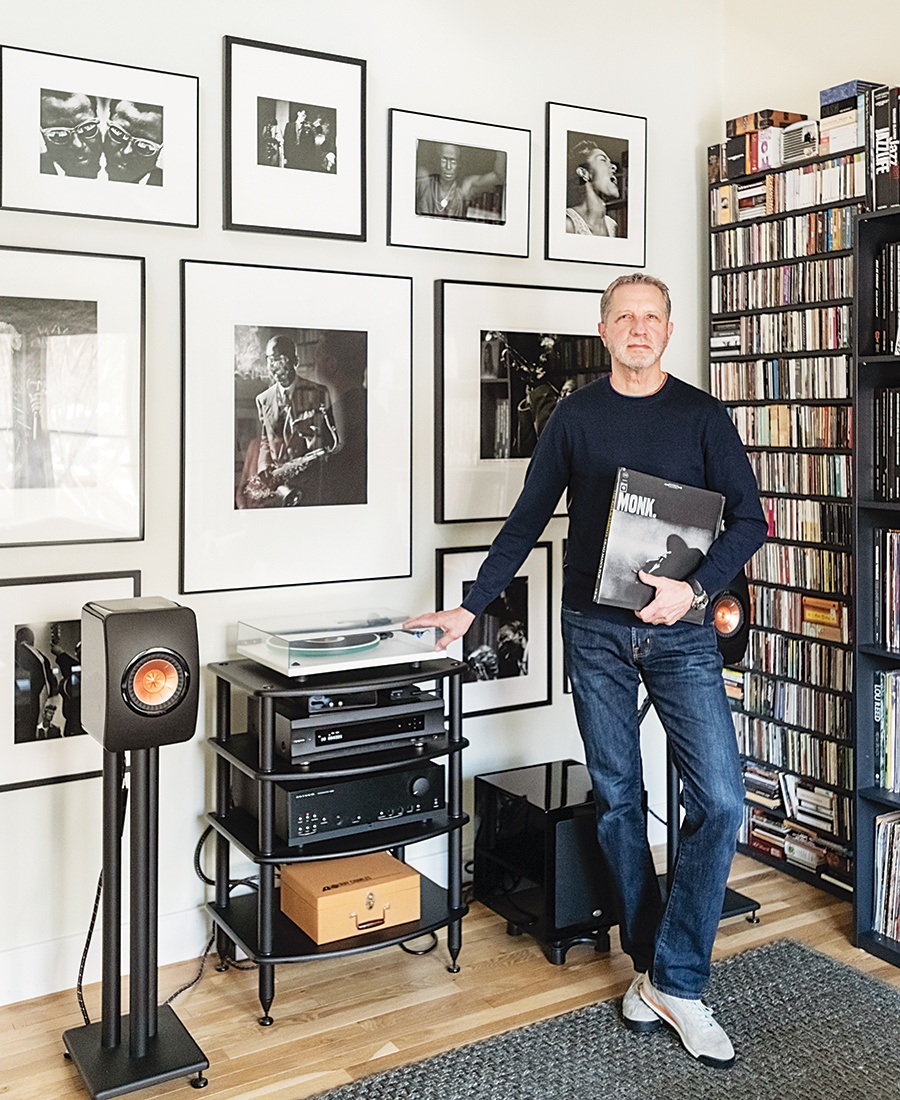 A photograph of sax player James Moody, by Herman Leonard, kicked off Leopold’s collection of black-and-white portraits of musicians. “It’s fun to sit, listen to music, and have these images staring back at you,” says Leopold, who is the president of the nonprofit SongwritingWith:Soldiers. / Photo by Matthew Williams / Styling by Kate C. Sheppard/Anchor Artists 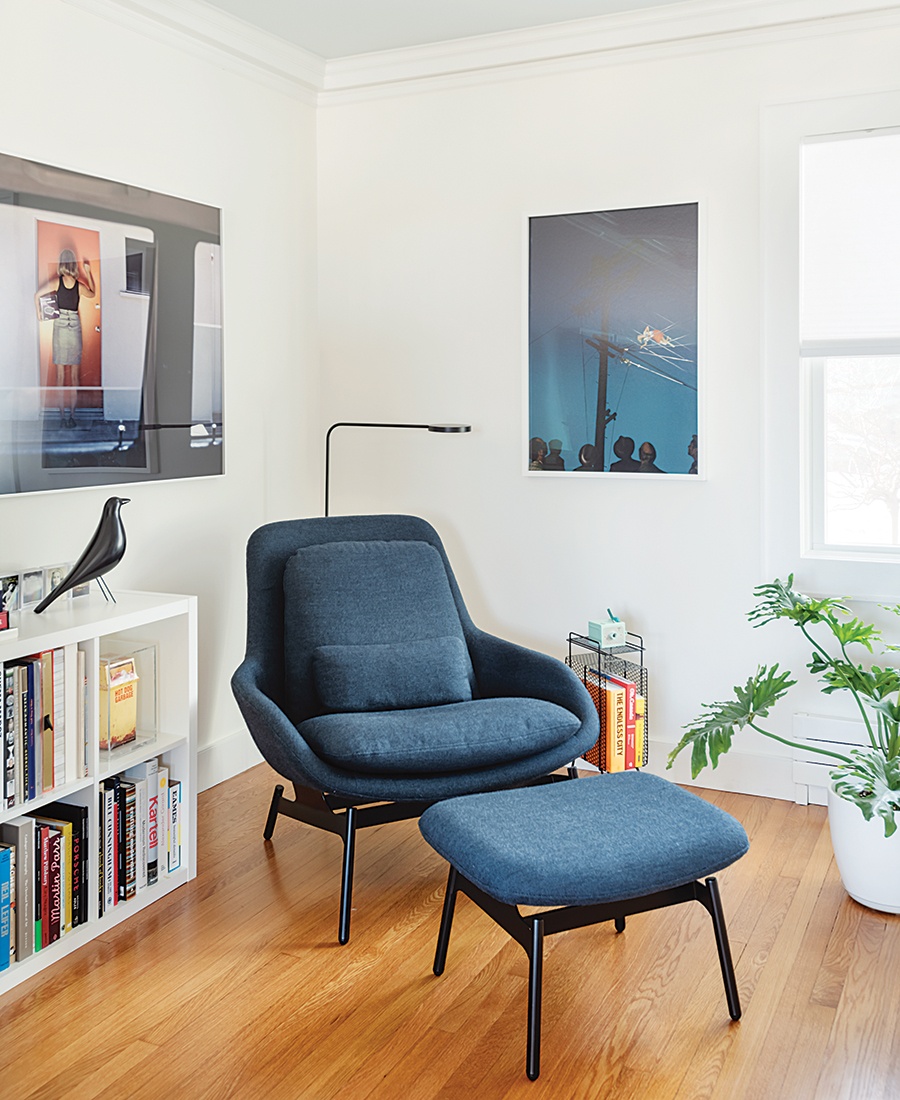 Leopold is attracted to the cinematic qualities of Alex Prager’s works, which allow one’s imagination to create its own narrative. He observes that the two images in the corner play off each other. “Are their stories possibly connected?” he asks. “You be the judge.” / Photo by Matthew Williams / Styling by Kate C. Sheppard/Anchor Artists 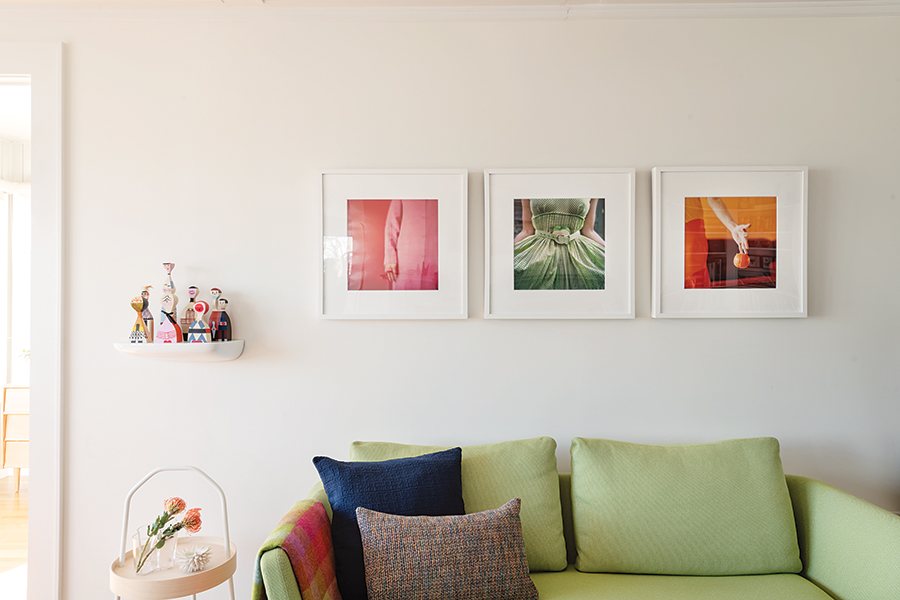 The collector met Cig Harvey years ago at an event hosted by the Photographic Resource Center in Boston. He’s since supported her limited-edition book runs and acquired a number of prints, including the trio here. “It’s fun to feel like you’re investing in an artist and their career; it enriches the experience of collecting,” Leopold says. / Photo by Matthew Williams / Styling by Kate C. Sheppard/Anchor Artists 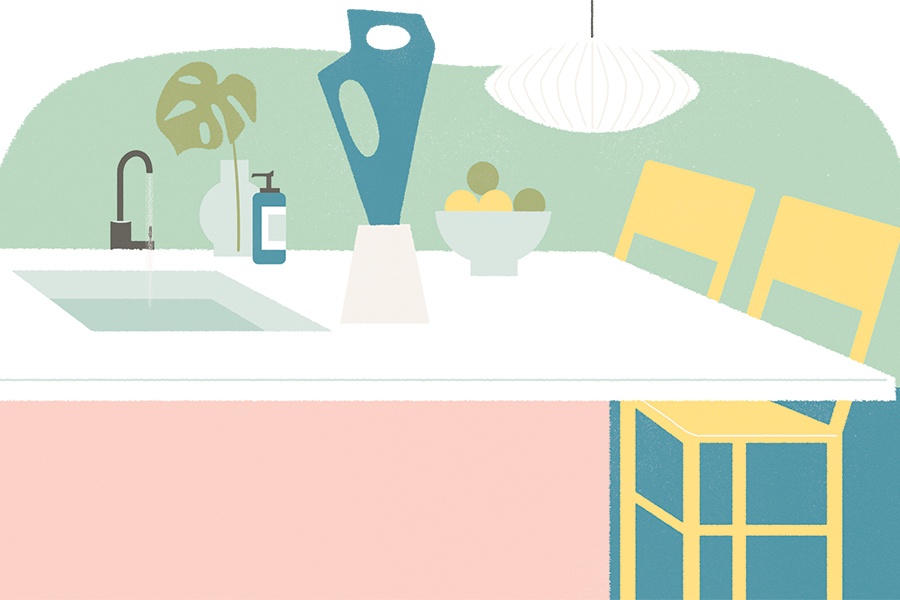 Embrace the element of surprise.
Delight visitors by incorporating art in unexpected places—for instance, a painting in the bathroom or a small sculpture on the kitchen island. Want to go a step further? Hide pieces. “People want everything on view all the time, but if you close the door to the guest bedroom and [visitors] discover a little piece of amazing art on the wall behind it, that’s really special,” Planeta says.

Don’t let art be an afterthought.
Whether you’re renovating or building new, Planeta recommends thinking about art as early on as possible so that you can design the space around key pieces as needed. “If you’re hanging something heavy, for example, you can bring that in at an early stage so you’re not ripping something apart later because you found an amazing piece that needs to be built into the wall,” he says.

Try mixing and matching.
“Some people only buy one type of artwork, but the most fun is doing something like pairing a more modern piece with your great-grandmother’s bronze bust. When you pair old and new, there’s a dialogue between them,” Planeta says. An easy way to achieve this is to lay out the art you have, and then determine which pieces work best together.

Let lighting enhance your displays.
Lighting technology today is better than ever, allowing you to not only manipulate light levels but also color temperature. “With dimmable recessed LEDs, you can adjust them from the warmest light to the coolest light, so you can actually change a piece of work with lighting and light it correctly for your space,” Planeta explains.