A pair of California transplants embrace laid-back living in Wellesley. 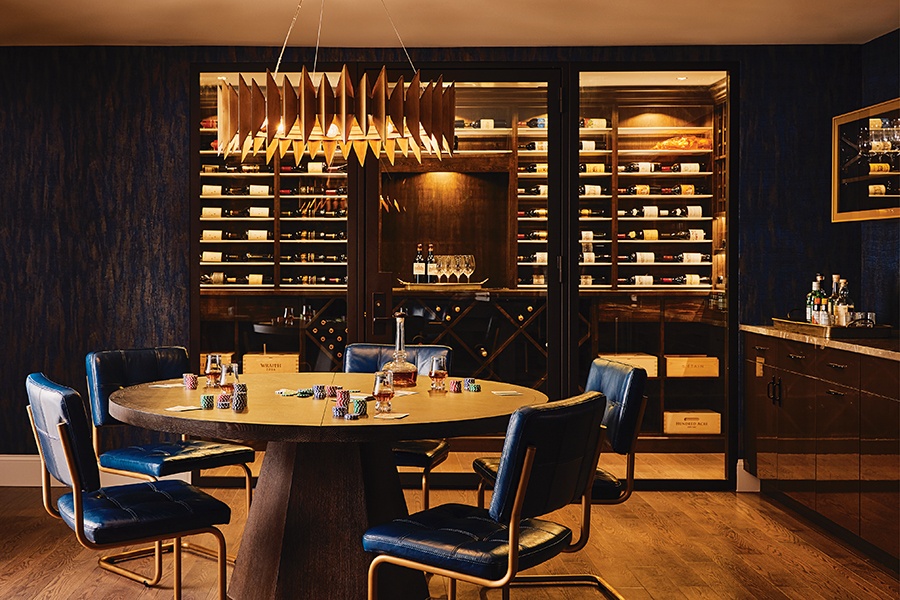 Brian and Helen had no plans to move from their Wellesley home anytime soon. Until, that is, they got a call from a good friend who said, “You have to come look at this lot.” Though only a foundation had been laid, the property boasted the private and sprawling backyard the California transplants had long coveted. They were sold.

Located just a mile from their current house, the move wasn’t far—but it was an opportunity. To help make their new home feel cohesive, the couple enlisted interior designer Tiffany LeBlanc. They tasked the LeBlanc Design principal with a succinct but unequivocal brief: “[We] didn’t want a typical Wellesley house,” Helen says. Having met in New York and lived in Austin and San Francisco, the parents of three teenage daughters and an active dog sought a home that wouldn’t feel too buttoned-up.

From the outside, the resulting navy blue–shuttered Colonial fits in perfectly with its traditional neighbors. But inside, the details strike a balance of playfulness, edge, and some West Coast panache.

To bridge the style shift from the classic front door to the modern interior, LeBlanc began in the foyer, forgoing white trim for soft gray paint, and installing a circular entry table and a wool runner with a “whisper of an animal pattern” padding the path upstairs. Right away, LeBlanc set the laid-back mood: “They didn’t want to feel like they [needed to wear] a starched shirt to hang out in the house,” she says of the owners’ vision. 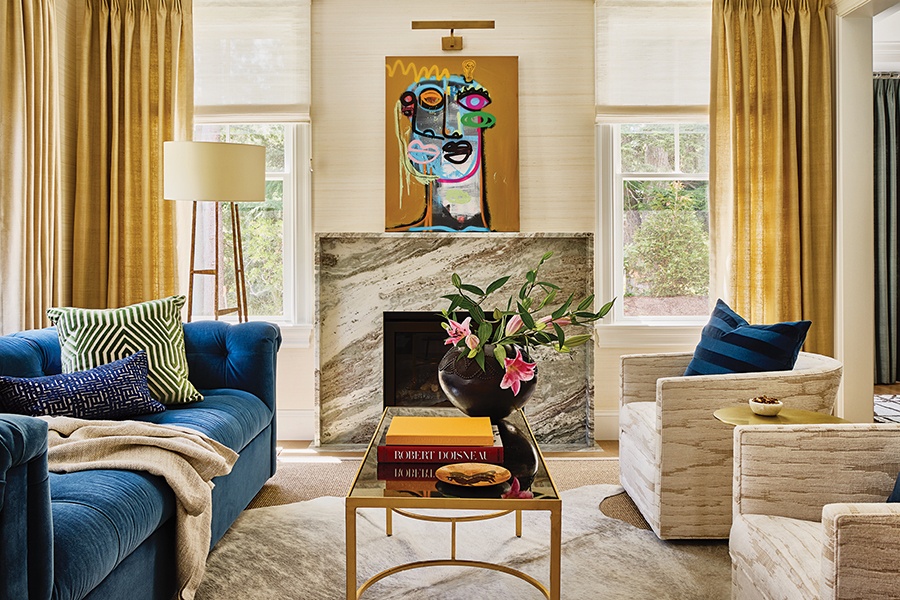 The mission to subtly subvert the expectation for a standard interior carries through into the adjacent office, where Brian’s love of blue shines through. Royal blue ceiling-height built-ins furnish the back wall of his work-from-home oasis, offset by a sisal rug, gray shelves, and antique brass hardware.

On the opposite side of the foyer, the living room invites conversation with a tufted, blue velvet couch, layered rugs, and a stylish marble fireplace. Above the mantel, a street art-meets-Picasso portrait sourced from a Newbury Street gallery is a family favorite. Given the homeowners’ new-fashioned aesthetic, “They were never going to put in a passive oil painting landscape,” LeBlanc explains.

The versatile vibe cascades into the kitchen, where a massive island, subway-tiled backsplash, and barstool seating keep things contemporary and casual. The adjoining breakfast nook mirrors the island with oversize pendant lighting and a built-in banquette that takes full advantage of the tree-lined backyard views.

One level below, meanwhile, the owners enjoy perhaps the swankiest basement around, complete with a wine cellar and poker room. Well-loved, the glamourous space regularly hosts poker nights for the adults and pool-table hangouts for their teen daughters.

As for LeBlanc’s favorite part of the project? It’s been seeing the evolution from a freshly staged new construction to a fully lived-in home. On a recent visit to the house, the kids were at the kitchen table, Brian was in his office, and “it was so full of life,” LeBlanc says, “and that’s a beautiful thing to be a part of.” 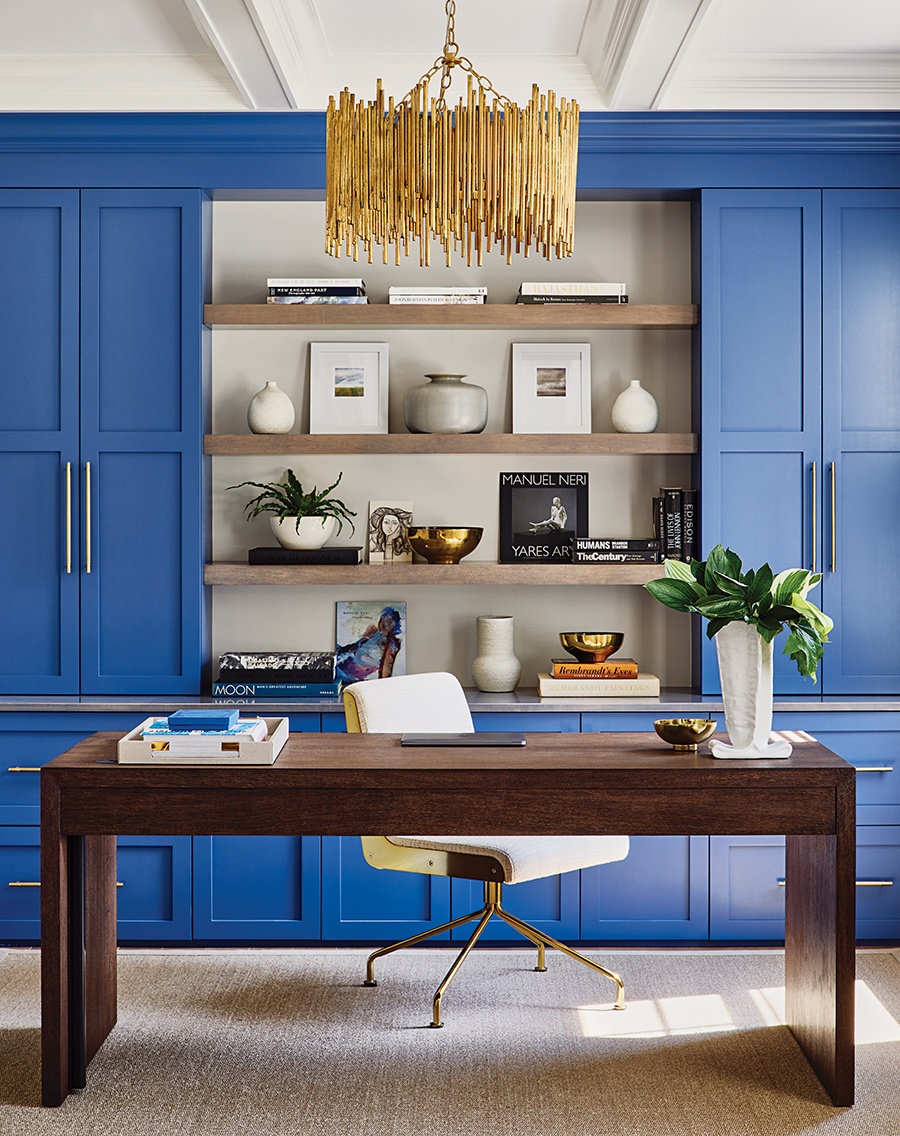 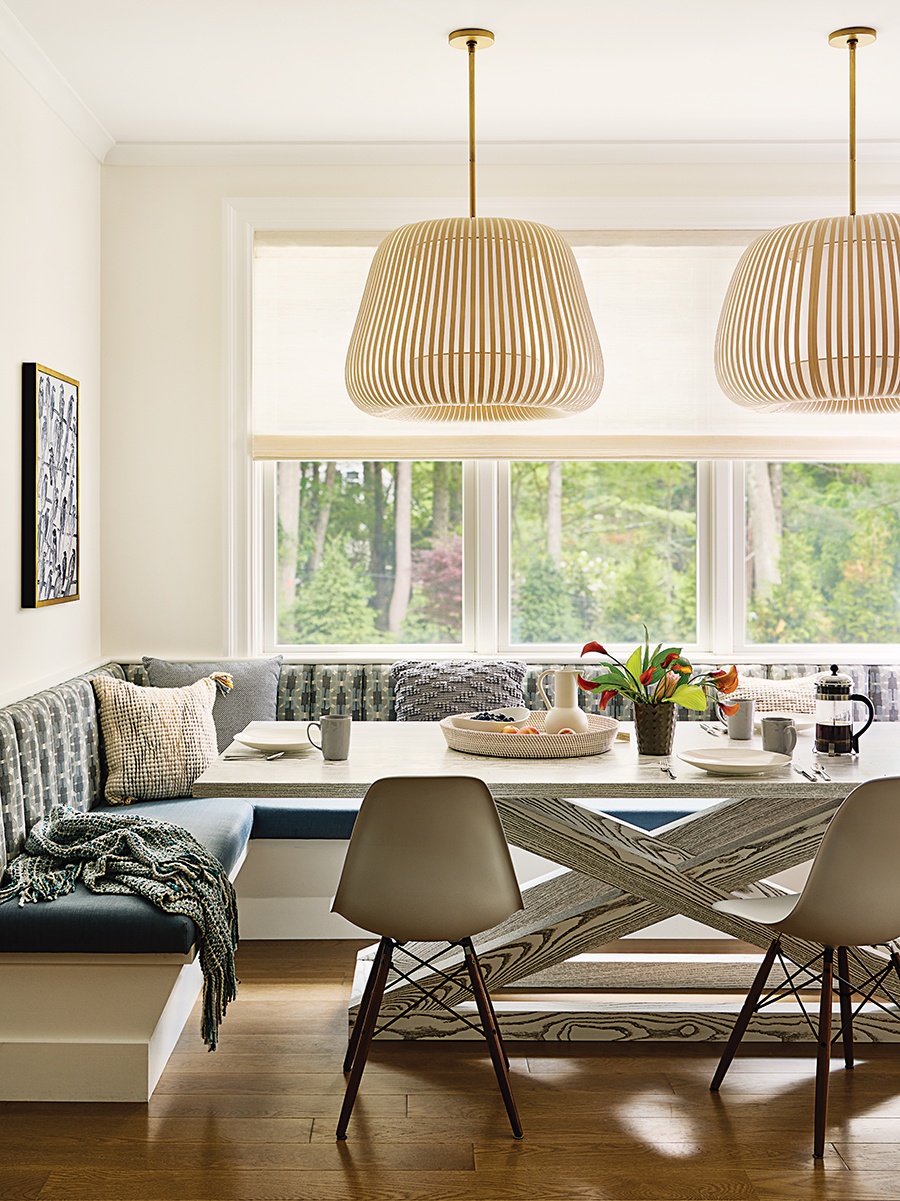 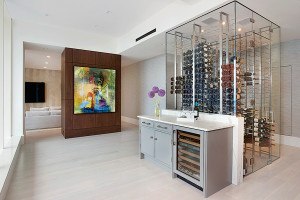