Thinking of moving outside the city? Here's what you need to know about Boxborough, which is gaining in popularity in today's housing market.

Alternatively, you may be looking through Zillow and filled with dread and confusion as you expand your house hunting radius further and further into affordable parts unknown. But never fear: We’re bringing you a guide to towns you may have heard of, but never considered as a home before now. This month we’re looking at Boxborough. A few generations ago, the only people living here were farmers. Then big businesses moved in, taking Boxborough from dirt to digital as Boxborough native and realtor Kristin Hilberg puts it. And then the urbanites came in 2020, desperate for the space the town offers from maintaining its rural roots. As a result, home prices skyrocketed up to 40 percent.

Hilberg’s journey is like that of many Boxborough residents: The realtor with Keller Williams was born on a working farm in town. When she grew up, her parents gave her a plot of land where she built the home where she raised her family. And now her own kids are raising their little ones here. The town has kept its rural roots, which drew buyers in 2020 when movers were scrambling for more space. Curious as to just what keeps people sticking around? Read on to find out. 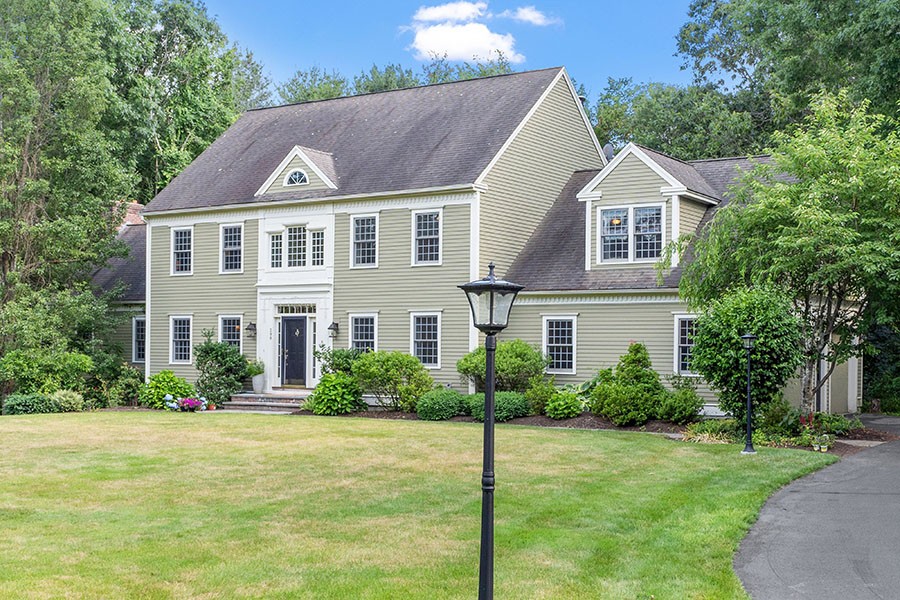 Drive: The approximately 28-mile drive between Boston and Boxborough can take anywhere between an hour and 90 minutes during prime commute time. You can take a more direct route via MA 2-W or take longer routes through I-93, I-90, and I-495 if you’re trying to avoid traffic clogs on other roadways.

Public transit: Boxborough doesn’t have its own commuter rail stop, but there’s one fewer than 10 minutes away in South Acton and another in nearby Littleton. From there, you can be whisked away to North Station in a little over 50 minutes.

Walkability:  12 – Your best bet on getting around town is a car. The town’s infrastructure doesn’t support getting around by foot, or bike, for that matter.

You’ll need that car if you want to experience town life. According to Hilberg, Boxboroughers head to Acton if they want a day of shopping followed by a meal out. “West Acton is our little mini urban area,” says Hilberg, adding Boxborough is designed not to have a lot of retail offerings in favor of more open green space. “(West Acton) is pretty much five minutes from anywhere in Boxborough and that’s our little area.”

Boxborough’s biggest pro is it’s a great place to live thanks to its easy access to Boston, excellent school system, and abundance of open space. Unfortunately, its greatest plus also spawns its greatest con: Once people move in, they don’t tend to move out. “What’s interesting about Boxborough is we have very little turnover,” Hilberg says. “People tend to just move in and stay.” In addition, Hilberg says the current zoning regulations call for allowing over an acre of land which means housing stock is limited and not necessarily varied or affordable depending on your price range.

But, if you’re down to mow a giant lawn and a flexible home buying budget, the payoffs of living in Boxborough are plentiful. The town is dedicated to maintaining its bucolic and agricultural feel, so there’s plenty of conservation land, plus peace and quiet. And if you have kids, you’re in luck. The Acton-Boxborough public school system earned an A+ grade from Niche.com based on its academics and ability to prepare students for college (and this very magazine ranked it among the top 10 best public high schools in Greater Boston) “Our biggest claim to fame is our school system,” Hilberg says. “It is consistently excellent…That’s probably the number one reason people move to Boxborough.”

To get a true sense of Boxborough, Hilberg recommends taking in its greenery. So take a drive down Hill Road, where you can see farms, cows, and horses. Off this road is Beaver Brook Meadow/Steel Farm, where you can do anything from bird watching and horseback riding to skating and sledding. Plus, you can enjoy the most scenic vistas in town.

Boxborough celebrates “Fifer’s Day” annually, an occasion meant to commemorate the Minutemen of 1775 and all they did to fight for liberty during the Revolutionary War. The June celebration kicks off with a road race, followed by a parade, music, and family fun like bouncy castles.