T. W. Food aims to deliver Michelin-worthy fare with rigorously local flavor. When it succeeds, the creativity inspires. When it doesn’t, the food gets lost in the flourishes.

If you go to the new T. W. Food in Cambridge’s Huron Village expecting it to be the Temple of Local Everything, as much of its publicity implied, you will indeed find many ingredients from nearby farms—ingredients so fresh that what appears on the menu one day may well be gone the next. What may surprise you, though, is how often they’re used in the service of something not so local: high-style French cooking. Tim Wiechmann, the T.W. of the name, grew up in Marblehead and overseas (his father was director of an international Harvard business program), and he trained in Paris with Alain Passard, whose three–Michelin star L’Arpège features cuisine based on local produce. Though Michelin hasn’t yet come to Boston, Wiechmann cooks as if he’s vying for a star of his own.

Wiechmann and his wife, Bronwyn (who also acts as hostess and server), could hardly have picked a finer time to open their first restaurant. The buy-local movement, long championed by Slow Food and Chefs Collaborative, both of which have a strong presence in Boston, is finally taking hold after years of being relegated to the hippie margins. And where better to open such a place than in Cambridge? The only more suitable locale might be Jamaica Plain—but Wiechmann had already cooked there, at the cozy Ten Tables, whose concept he conceived, he told me, before deciding to follow his muse in France.

T. W. Food is reminiscent of Ten Tables, although there are two more tables and the look is more stylish. Its aesthetic evokes 1960s modernist glamour, and it’s tremendously appealing: post-Marimekko fabric hangings against butterscotch walls, wicker and iron chairs swiped off a Parisian balcony, a dramatic antique Japanese chest. The Wiechmanns have created a salon that’s just right for the dressed-down, socially conscious, moneyed-but-doesn’t-talk-about-it neighborhood (complete with a wine list that rates as one of the most interesting around).

I wanted to love T. W. Food unconditionally. Having written a book on the slow-food movement, I could not be more sympathetic to the philosophy summarized on the menu: “The food is hand-crafted with a strong stress on sustainable and fairly treated ingredients.” Wiechmann is getting some seriously good products, especially meat, and regularly uses every part of the animal. When he focuses his formidable technique on individual ingredients, stand back—you’re in for a definitive taste to put in the memory bank.

But Wiechmann aims to be a creative, inventive chef, like the mentors to whom he pays homage on the menu (Passard, Joël Robuchon, and the kitchen of Taillevent), and a number of his inventions are simply too odd for me. We’ll leave aside my aversion to butter in or on almost everything; that’s second nature to a chef who cut his teeth in Paris (and yes, the butter, from Vermont Butter & Cheese, is excellent). I’m not sure, though, that New England diners who have in mind an all-local/sustainable place will expect such an haute (and impolitic) creation as foie gras crème brûlée (“for my mentors”). Or embrace quirky accents like lavender foam on a polenta heavy with butter, cream, and superrich mascarpone. Wiechmann is still testing flavor combinations because they strike him as a fine idea, as he contemplates, say, the last trimmings from a sow he bought whole and butchered himself. His is very much a cuisine in formation. 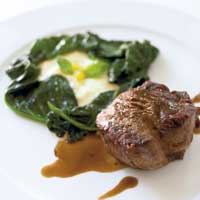 I don’t mean to slight some remarkable dishes I treasure already: superb pheasant from New Jersey, of all places, and the best beef I’ve had in a long time—certainly better than many steakhouse cuts I’ve had recently—from a whole grass-fed steer Wiechmann bought from Peter Merrill of Concord’s Big Ox Farm. I was the lucky recipient of the filet mignon (no, they didn’t save it for a critic), a low puck that Wiechmann tied into a perfect circle and sautéed, the way French chefs cook steaks.

The pheasant breast ($30) was so succulent that I remember every detail: the rich wet-sand color, the only slightly gamy but deep flavor (the meat was paired with wild chanterelles, a good idea, and seared foie gras, less so). Boy, would I like some again. A fish soup had fantastically focused fumet taste and nuggets of local fish you seldom get, like cusk and haddock, all brilliantly fresh. The grilled bluefish ($29) was unapologetically oily, with nicely crisped skin and very dark meat. This is a great, perhaps the great, New England fish, and every chef hereabouts should buy lots when it’s running, in midsummer. 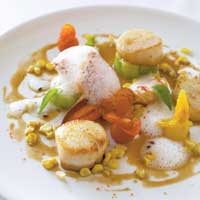 It’s indicative that I can’t recall any of the vegetables. Like practically every ambitious French chef, Wiechmann respects them but doesn’t seem to love them, treating vegetables—even if straight from the garden—more as ornament than an integral part of the dish. What counts with him is the protein, and his is impeccable. The most winning entrée was the Atlantic sea scallops and Maine lobster with heirloom tomatoes, fresh corn, and basil ($30)—lovely to look at, perfectly local, arranged over an immaculate little pool of butter-enriched roasted lobster jus. 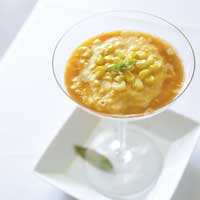 Some sauces, though, are too bizarre to be anything but politely ignored (Concord grape butter with the bluefish, for example), and when vegetables are meant to star, the results are unimpressive. That pink-foamed, all–butterfat, runny polenta ($25) was mostly a mess. The constantly tweaked scrambled egg appetizer ($12), served in a martini glass to show off the layers, is marvelously satiny: I don’t know of another restaurant taking the trouble to make a proper brouille, hand-whisking the eggs to a foam over very low heat, and adding fresh yolks to stop the cooking. But in one version, a too generous layer of fino sherry contributed overpowering liquid; in another, the consistency of the sea urchin was too close to the eggs’ to make a meaningful contrast. The heirloom tomato marmalade that accompanied it was far better. 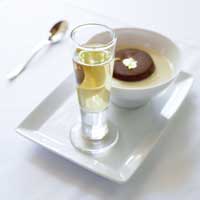 Desserts (all $8) are often more strange than successful, like the “scotch and cigars,” a dark chocolate mousse cake with a sweet and smoky Laphroaig scotch syrup in a shooter glass to the side, and the crème anglaise steeped with tobacco leaves—an idea I hoped had come and gone. More satisfying was the plate of three French cheeses, chosen by Mark Trumble of Watertown’s A. Russo and Sons.

T. W. Food feels European and ambitious in the way that many new Michelin-minded French restaurants tend to be. While pricey and a bit precious, it is also a pleasant place to go and to be. Wiechmann is an original talent, one who deserves welcome and support from a community whose food he is bent on celebrating with great dedication and skill. I’ll be watching—and hoping for a cuisine that lives up more to its “local” promise.