It would be hard to devise a restaurant more formulaic than Gaslight, the noisy South End brasserie on the hopping stretch of Harrison Avenue that’s well on its way to becoming the new Tremont Street.

If it feels as though you’ve seen this kind of French prefab before, you have: Think Brasserie Jo, Eastern Standard, and, if you have a good memory, Metro (in the former Sears Building in Porter Square). That’s because restaurateurs—and investors— consider the brasserie to be an infallible money-spinner. Buy enough bentwood chairs, put in red leatherette banquettes, lay hexagonal black and white tile, decorate the menu with belle époque curlicues, make a decent steak frites, and you’re home free. The creators of Boston’s brasseries, having apparently studied the playbook of New York’s Keith McNally (the man responsible for Balthazar and Pastis), seem keen on emulating his genius for classic design.

Seth Woods and his Aquitaine Group, the team behind Gaslight, have previously
succeeded with this formula at the popular and cozy Aquitaine and Aquitaine Bis, which are a bit more in the mold of a bistro than a brasserie. The difference? Although both have basic, reasonably priced menus, brasseries (literally, “breweries”) are usually bigger, with less-ambitious food that can be turned out quickly. Bistros, meanwhile, tend to be more individualistic, like the idiosyncratic Craigie Street Bistrot in Cambridge or Petit Robert Bistro, the nearest Boston analogue to a simple, affordable Parisian restaurant. 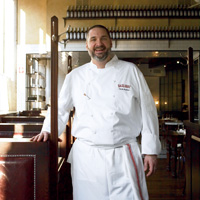 Now Woods and his partners apparently want to take their success to the next level: a big, high-volume restaurant like Papa Razzi. In a passing coincidence, Papa Razzi is owned by the same group that brought us Bouchée, another recent Boston retread of the Frenchy formula. But Bouchée hired an experienced former chef-owner, Tim Partridge, whose restaurant Perdix was a darling of the Hub’s fine-dining crowd and who pushes the boundaries just enough to keep the food a half step above the ordinary. Gaslight’s, by contrast, is a half step below.

There’s plenty to like, though. The waitstaff is friendly (despite the kitchen’s bumpy timing), the restaurant’s overall look is right, and during my visits the South End power brokers were everywhere. How they heard each other, if they wanted to, was another matter: The chic tile and wood create a merciless racket. 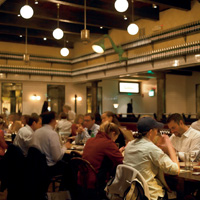 (The first time I walked into Gaslight, sometime within the first two weeks of its opening, I walked right back out again with the beginnings of a headache. On later visits, though, the noise level had improved to nearly tolerable. Plus, in response to customer complaints, the management recently installed noise-reduction panels and drapery.) The reason to brave the din and the crowds is the prices—they’re low enough to let you go through the menu till you find the sort of no-think standbys that this formula depends on. 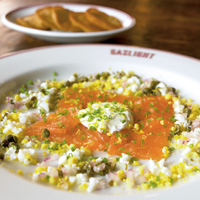 It took me three dinners to discover mine. I found most of the food to have strikingly little flavor, whether because the prices mandate inferior ingredients or because the kitchen is pumping out so much food every night. First courses are particularly chancy—though, as with pretty much the whole menu, you can get some safe and perfectly fine ones. The smoked salmon ($8.75) is fresh and nicely oily, cold-smoked in-house, according to one of the chefs, Keenan Langlois (the executive chef is Christopher Robins, who worked with Woods at Aquitaine). But don’t bother with the silver-dollar chickpea blini served with it, which look like soggy greenish cocktail crackers and taste of nothing. The potato tart with Roquefort and truffles ($6.75) has a zing from the Roquefort and grated Parmesan (which I initially mistook for grains of mustard) baked into its shell. It’s rich, satisfying, and ideal for winter. Salads—roasted beet with pear, walnuts, and Roquefort ($7.50) and the “Gaslight” ($7.75), with haricots verts and lardons—are okay, if unmemorable.

The pâté de campagne ($7.50), a brasserie dish that should be good, is generic, with the barest hint of white onion and few discernible traces of the smoked ham and brandy Langlois told me were in it. And even if the onion soup ($6.50) did in fact have the fresh veal stock, truffle peelings, and braising liquid from short ribs that Langlois described, it was thin, greasy, and tinny.

Better to go straight to the main courses, which are much more successful, and much better deals. The sliced leg of lamb with garlic, herbs, and sliced baked potatoes with Morbier cheese is a steal at $18.75. I haven’t had lamb with this much steaky flavor in a long time—and I’ve had plenty of lamb racks and chops that start at twice the price. A very respectable steak frites was another bargain, at $19.75. The fish dishes are more hit-and-miss: The roast salmon filet with garlic-braised escarole and lemon confit ($19.25) is duller than it sounds, delivering all the mealy texture and weak flavor of fatty farmed salmon. But a trickier fish offering did come off well: pôelée espagnol, with cod, shellfish, and chorizo (pôelée for pan-braised, espagnol for the Spanish sausage). Each chunk was cooked right and, surprisingly, had character. At $19.50, this is also a good buy.

My favorite of the main courses was the croque-monsieur ($9.75)—a brasserie standard that not everyone revives, though everyone should since it’s French comfort food par excellence. Robins makes his with buttered brioche smeared with béchamel and layered with ham, then baked under a brick and browned at the finish with even more béchamel and cheese. It’s pillowy and divine, and cheap. 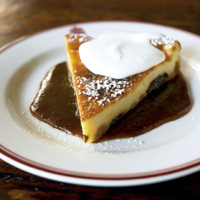 If you had the croque-monsieur without ham and cheese, you could sprinkle it with powdered sugar and call it dessert—a far better option than ordering the humdrum sweets on the menu (all $6.75), none of which was outright bad, but all of which were disappointing. The warm almond cake was oddly moist, grainy, and heavy; the lemon tart anemic; the tarte Tatin low in fruit and caramel, its defining characteristic, with a flavorless crust. For novelty, at least, try the far breton, a low, clafouti-like custard baked in a cake pan with brandy-soaked prunes and raisins. It’s a little rubbery, but an improvement on the Grand Marnier–soaked crêpes flambé.

Gaslight needs to refine its take on a very-tried-and-not-always-true formula. But go ahead and enjoy the scene while it’s hot: If you order wisely, you’ll have a solid meal that makes the accompanying people-watching a hot bargain.