Rediscovering a wine lover’s haven — and a culinary talent — in the Theater District. By my second dinner at Troquet, I knew the experience wasn’t a fluke. These were two of the most assured meals I’d had in Boston, with direct, balanced, complex flavors that seemed simple but aren’t easy to achieve. I thought I could easily be in a two-star Michelin restaurant, and the fact that most of the dishes at Troquet — which built its reputation on pairing wine with food — are designed to be wine-friendly only heightened the impression. Why have we heard so little about it all these years? And where have I been?

Actually, I knew exactly where I’d been: leaving Troquet to my wine-maven friends, who book important dinners with fellow wine snobs there. When I reviewed Troquet a few months after it opened in 2001, I was more impressed with the wine selection and the service of co-owner Chris Campbell, a longtime wine enthusiast who had lived and worked in Burgundy, than I was by the food of chef and co-owner Scott Hebert. The place struck me as a shoebox of a restaurant, shoehorned into an unlikely block in the Theater District. The small-plates menu made for forgettable food that didn’t distract much from the wine selection, which I took to be its purpose. The somewhat stark décor seemed then, as it still does, an afterthought.

Things changed. A few years after the restaurant opened, the upstairs space became available, and the sit-down area moved up a flight to airier, quieter quarters with views of the Common. Small plates were replaced by full-size dishes. Hebert blossomed as a cook, developing his already solid French technique and relying on strictly seasonal specials that might only be on the menu for a couple of days. The once-grimy Theater District, upgraded by Emerson College, the Ritz towers, and the W hotel, has even become something of a dining destination.

The food still takes second place to the wine. Each menu item comes with wine suggestions from a numbered list, but I’d recommend asking Campbell or one of the well-trained staffers for advice. You’ll learn a lot, and you won’t need to spend more than you’d like; the challenge of a budget brings out their creativity. Yet you’ll be rewarded for a splurge: The great wine selection (and value on high-end bottles), my wine-savviest friend told me, has made Troquet an open secret around the country. (Campbell explained that as prices go up, his markup goes down, meaning that bottles over $100 are the best value.) It has also become a favorite among Boston wine insiders for regular tasting dinners; the boys’-night-out table next to ours one evening, for example, was littered with champagne bottles that had been wrapped to obscure the labels.

My budget didn’t allow for big splurges. But I sure got to taste some great wines at our first dinner, when we lucked into a rare basement-clearing wine sale, with odd bottles lined up on tables downstairs for diners to shop for as if at an auction. At a second dinner we put ourselves in Campbell’s hands, and learned stuff we could use in the future: in this case, that a non–designated Sancerre from a Sancerre-making house in the Loire, Blondeau, is every bit as good as an official Sancerre, and a lot cheaper. Like the best wine experts, Campbell is completely modest, approachable, and enthusiastic.
But even if the food is deferential, it’s worthy of praise — especially the roast duck ($38). It’s first presented to the table on a wooden board, looking more like a roast pork butt, a puffed-out and stubby body with the neck sticking out. Then it vanishes before coming back in recognizable slices, with crisp bits of confit leg on the side. Both the technique and seasonings are Chinese: Hebert inflates the skin with an air pump and pours a marinade of ginger, scallions, honey, and black vinegar over the duck, then roasts it -vertically. He serves the meat on a bed of wild rice. The skin isn’t quite the glazed, crisp Peking duck skin of your dreams, but the meat is by far the moistest, fullest-flavored duck I’ve had in Boston. 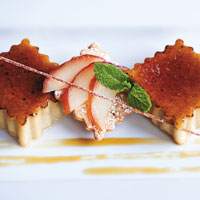 Duck is Hebert’s pork: He uses duck fat and flavorful bits throughout the menu, and it makes everything better. The best part of his roast suckling pig presentation ($39) is a terrine of pig’s feet wrapped in pork skin, crisped in duck fat. Warm duck confit is strewn over my favorite appetizer, a frisée salad with smoked bacon and a fried soft-boiled duck egg ($18).

These pricey but delicious examples lead me to a theory about dining at Troquet: As with the wine, the higher the dish’s cost, the higher the value. Most of the appetizers are $14 to $23 and just okay. If you’re on a budget, skip the apps and order mains.

And don’t just stick to pork and duck. Two versions of halibut, a late-summer one with fresh ratatouille and a well-rendered version of the classic fish in potato crust (both $36), were pretty much perfect. I remembered how much I like the meaty fish cobia when Hebert put it in a miso broth with udon noodles, sesame, and bok choy ($36). My guests said that the roast Giannone chicken ($29) was the best chicken they’d ever had, though I found it a bit salty and tough. Slow-roasted -Vermont lamb ($39) was wonderfully tender and cooked to a just-right pink; I liked the pressed slab of unsmoked lamb “bacon” that accompanied the slices of roast loin. Only the porcini-crusted veal chop ($42) was a flavorless, expensive disappointment.

The attention to sauces and vegetables shows sophistication. The chicken’s reduction with sautéed chanterelles was impeccable, as was the chicken-stock-based sauce for the potato-crusted halibut, with mushrooms, madeira, and truffles, and the lamb jus, made of roasting juices and fermented black garlic.

As for sides — a cheddar spoon bread with fresh local corn served alongside the chicken; the potato, corn, and lima-bean succotash served with the suckling pig — they’re marvelous on their own, but even better with the components they’re designed to go with.

All of which is why I’m impressed with Hebert, and with the unpretentious finesse of Troquet as a whole. Even the desserts, by pastry chef Sarah Taylor, are too good to miss; they’re seasonal, too. A wild-blueberry soufflé ($11.75) with crunchy sugar on top had great texture and sweetness (though the candied-pecan and caramel soufflé, also $11.75, was a bit dull). We devoured a lemon trio ($9.75), particularly the tart lemon-curd mille-feuille. I was also impressed by the definitive maple flavor in the maple-sugar crème brûlée ($10.75) — something difficult to achieve without maple-extract goosing.

Even if Troquet doesn’t have the ceremony of a special-occasion restaurant, it has the calm, the professionalism, and, most of all, the quality of one. I may have come late to the wine insiders’ secret. But I intend to make up for lost time.