After tasting all eight of the New England oyster varieties on the menu (there are about 12 total; the number varies), my favorites were the Island Creeks ($2 each), 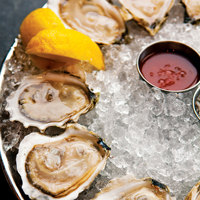 and not only because of the name. Their flavor is a lovely mixture of flint and sugar, with the light, smoky sweetness of a mint julep. Rocky Nooks ($2 each), meanwhile, were refreshing and saline.

Sewall’s lobster comes from his cousin Mark in Maine, whose name, listed on the menu, has become familiar to Sewall followers. The baked stuffed lobster ($32) is as irresistible as it is buttery, a signature, celebratory dish filled with a bready, eggy stuffing. A lobster roll ($19), though, with plenty of lobster meat on a homemade rosemary roll, was all butter, and the bread lacked flavor. We left it largely untouched.

The star of the menu is the seafood casserole, a staple of Bennett’s mother’s table. The binder is an “old-school sherry cream sauce,” as Sewall calls it, but there’s nothing floury or pasty about it. It has strong-flavored stock and an abundance of lobster, scallops, shrimp, cod, and haddock; and comes baked to order with a rich crust of crushed saltines, in portions sized for one ($24), two ($40), or four ($72). You’d be crazy not to try it, even if that meant missing out on other noteworthy fish dishes, such as the Faroe Islands salmon with brown-butter cauliflower and garlic-parsley purée ($26). The fish had good, almost wild flavor, unlike the usual bland orange fat that passes for Atlantic salmon. The accompaniments, though, were just-okay distractions rather than integral complements — a problem with nearly every main course.

Another winning fish was grilled dorade (sea bream) with shaved Meyer lemon, roasted fennel, artichoke confit, and potato-and-olive niçoise ($32) — as much a taste of the Mediterranean as the casserole was a taste of New England. The accompanying vegetables had zing, and the deep flavor that results from long cooking with olive oil and Mediterranean herbs.

You would be safe missing the cod — I know cod is dull, but it doesn’t have to be this dull—with a disappointingly flat cornmeal crust ($28). The same goes for the clam chowder ($10), in a thin broth overwhelmed by bacon. Yellowfin tuna with yellow carrots, black rice, and a citrus-ginger butter ($27) was fine but routine — a dish pumped out by a busy kitchen on a busy night.

That’s the downside of Island Creek’s success so soon after opening. Then again, sometimes Sewall will toss off a special that shows him at the top of his game, such as a starter of sweet Maine shrimp ($11), lightly fried and presented with spicy mayo. Or a whole black bass ($32). The beautiful fish, with its black-incised pattern of scales that looked like a Japanese or Chinese print, was flash-fried, then set over a vaguely Asian shellfish broth with buckwheat noodles, braised mustard greens, and chewy cubes of house-made tasso ham. It was a masterly dish, worth eating to the very last nugget.

Sadly, the desserts (all $8) can leave you with a bad impression of the kitchen — something dessert should never do. A dish of cookies and ice milk, for instance, featured soft, greasy disks served with a whitish slush that tasted like a retro Weight Watchers shake. Peanut butter frozen yogurt was better, and a lemon meringue special had a nicely flavored curd, though both the meringue and the pie crust were underbaked. Island Creek’s sweets need work to come up to the level of the seafood.

But that fish? It can hardly be improved on. And if occasionally mechanical dishes are the price of a throbbing place that manages crowds with a warm welcome, then I’ll take it — and bring along anybody who wants to figure out why New England seafood (and okay, Fenway) matters to the world.