Dining out at The Blue Room 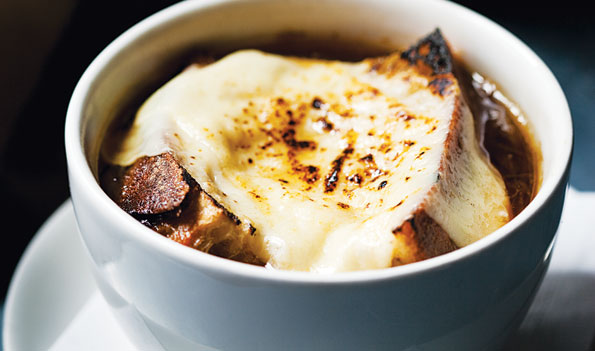 The Blue Room doesn’t need to reinvent itself. The formula has been working since 1996, when one of its current owners, Nick Zappia, purchased the restaurant with then-chef Steve Johnson. A spacious, friendly bar takes up about a third of the space, and the dining room is dominated by a warm, open kitchen and has views of the glowing wood-fired grill. Johnson’s manning of the stoves helped define a new kind of hospitality, one that influenced young cooks for years.

Now, of course, everyone’s launching restaurants in Kendall, nearby Central Square, and the stretch between them known as Area Four. Zappia and his wife and co-owner, Liz Vilardi, were pioneers in this new food corridor, opening the stylish wine and cheese shop Central Bottle on Mass. Ave. in 2009. Amid the flurry of local activity, the Blue Room has kept humming along, distinguished by its geniality and the comfort of the booths, folk art, and brick walls that make it feel like home.

Nonetheless, Zappia and Vilardi recently hired Robert Grant, who spent three years at the Butcher Shop in the South End, to inject new life and new ideas into the menu. With Grant running the kitchen, there’s more energy, an increased focus on local ingredients, and terrific first courses that complement the superb wines on Vilardi’s list. If only Grant’s main courses were as well executed as those starters.

An appetizer of duck leg confit with lentils and pickled beets ($11) played to Grant’s strengths: The skin was crisp and the meat moist, and I could taste the spices and rosemary used in the salt cure. The Puy lentils simmered in duck stock had balanced richness, while the tiny pieces of pickled golden beets added a bit of acidity. Wood-grilled octopus ($12), which is slowly simmered in olive oil with lemon before grilling, was as tender as any octopus I’ve had. (The Brooklyn company Grant buys it from is known for tenderizing it in a washing machine, he told me.) It had a marvelous, light smokiness from the grill, and paired well with the accompanying fingerling potatoes and Little Gem lettuce leaves in a heavy coating of dill-and-mint vinaigrette.

French onion soup ($12, below) was the best I’ve had since dining at Deuxave — a beefy, unctuous stock with layers of onion, herb, and beef flavor, and the sweet, mellow-wood aroma of sherry. Making it is a three-day process, which gives the broth full complexity. Braised beef tongue ($9, at top) is a similarly involved dish: It’s cooked for hours in beef stock, cut into cubes, sautéed in butter with sliced trumpet mushrooms, and served over a glaze of reduced cooking liquid, resulting in sweet, soft, beautifully flavored meat.

Pair any of these with a glass of wine and a basket of the mini Iggy’s Francese loaves or the changing “one perfect cheese” plate with homemade confiture ($9), and you have a great pre- or post-movie light meal.

Other appetizers were variable. Grant’s cotechino ($12) was like breakfast sausage, just pork belly with nutmeg, cinnamon, and sugar — a recipe inspired by the excellent Philadelphia chef Marc Vetri. While this version was better than most, it was so salty that I wondered if it was a mistake. Grilled pizza on a dull flatbread crust ($10) was also sweet, spread with tomato marmalade in place of sauce. Generous amounts of scamorza (made in Everett) and a fresh, bright, garlicky pesto on top served to counteract (though not entirely) the marmalade. The gnocchi ($12 as an appetizer, $24 as an entrée) were too soft for my taste, but the lamb ragu really tasted of lamb (a big plus), and the airy cloud of Parmigiano-Reggiano grated on top was fun to mix in.

A baffling number of main courses were semi-submerged in what seemed like salty broths, and most were finished with a good bit of butter, a souvenir of Grant’s time at Thomas Keller’s Bouchon in Las Vegas. Much of the fish was soft and unmemorable, with the exception of a special of seared fluke ($27) that our server told us had been in the water just that morning. Its vibrant freshness, perfectly highlighted by its simple preparation, was neither helped nor hurt by a brothy fish fumet with Spanish onions and fennel confit. An unusually generous portion of Arctic char ($21) had a nicely crisp skin but mushy flesh, and the sunchokes and bits of kale in a pool of beurre blanc tasted strangely sweet. Vegetable “cassoulet” consisted of undercooked root vegetables and Tarbais beans in a creamy parsnip velouté under doughy puff pastry ($18); a lot of work surely went into creating what tasted like a commercial, if underbaked, potpie. Buttery risotto with winter greens and hazelnuts ($19) had no bite at all, was soaked in broth, and featured hazelnuts that resembled a sweetened paste for ice cream. 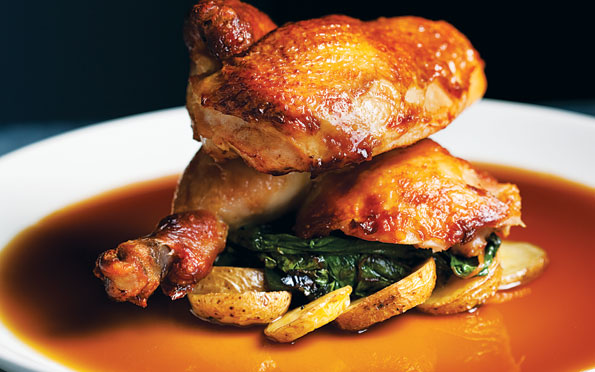 Texture was an issue with poultry and meat, too. Pork shoulder braised in pork stock and apple cider ($22) was served as a compact square that had been grilled to a caramelized crust. It looked great and had good flavor, but the shreds of meat were dry, making eating them a salty chore. The duck breast ($26), served with soupy, oddly al dente red rice, had a watery feel, as did the overbrined roast chicken ($24, below). But the chicken had more authoritative flavor than the duck, and the vegetables served with it — German butterball potatoes from Verrill Farm and bright chard stir-fried with garlic — made it the prettiest and best-conceived main course.

Desserts got the Blue Room back on track. The cranberry sorbet, though a little gritty, packed a punch of fresh berry flavor, and was a nice complement to the refreshing Meyer lemon sorbet paired with it ($8). The chocolate terrine with black-pepper ice cream ($10) was a low rectangle of dense, deep chocolate flavor, glazed as it was with a current cult-favorite brand of chocolate, Mast Brothers. Best, though, was the banana cream tart ($7), which is baked in an individual mold. It had a fantastically thin, wonderfully flavored crust.

Grant needs time to focus and tighten his main courses. But the appetizers are off to a flying start, and worthy of a meal in themselves. And there’s that wine, cheese, and the warm, professional welcome that’s been there from the start. Clearly this engine is still being tuned, but the chassis of the Blue Room is in fine shape, and it’s ready to keep cruising for a long time to come.