First Bite at Casa B 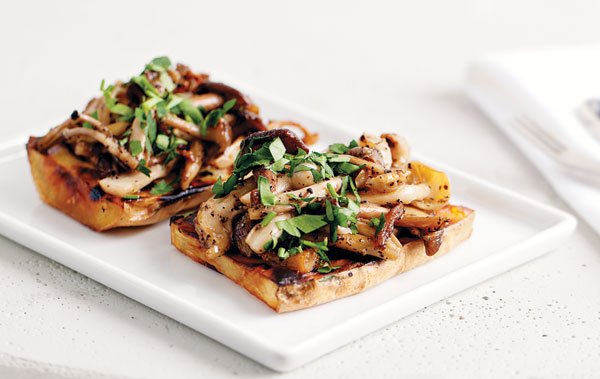 WITH SO MANY SPOTS in town touting their locavore sensibilities and comfort fare, it’s a rare restaurant that drops you — mind, body, and palate — someplace else entirely. Somerville’s Casa B is one of them. The owners, architects turned caterers turned restaurateurs Alberto Cabré and Angelina Jockovich, come from Puerto Rico and Colombia, respectively, and their menu draws from Spanish-Caribbean and Latin-American flavors: plantains, citrus, and seafood aplenty. The décor, meanwhile, hints at the couple’s design background. Clad in cool white tones, the two-level space is sleek but not stark, with quirky touches like empty picture frames and a display of faded photos. Heading downstairs to the dining room, with its “living wall” of greenery and bubblelike glass-pendant lighting, is like descending into another realm, not a Union Square basement.

It’s an escape, though not a culinary Shangri-La. Plantain chips with green asparagus sauce were a cheery kickoff to the meal. Order the trio of ceviches (lobster, snapper, and salmon, $18) and you’ll get even more of the crispy snacks, this time mixed with taro and other root-vegetable chips.

Unfortunately, they were the high point of a recent meal. Though a pile of wild mushrooms on white sweet potato ($7, pictured above) had nice texture, the dish was rather bland. Spanish jamón served with guava jam ($9) was sliced too thick, making for a rubbery mouthful, and the overly dense white corn “toasts” underneath didn’t help. Buñuelos ($7), Colombian-style cheese fritters, were fantastically light and airy, but the accompanying aioli had an odd fishy taste. And grilled Spanish chorizo ($9) wasn’t the dry, spicy sausage we expected; what arrived was smoky, moist, and mild. In fact, heat was noticeably absent across the board, a surprise given the menu’s Latin influences. A little zing would go a long way.

Though dessert wasn’t offered to us, the expert drinks, including a frothy pisco sour and the rum-and-vermouth-based “El Presidente,” filled in. And despite the menu misses, it’s hard not to leave Casa B  smiling. The food may not be transcendent, but like a weekend jaunt to San Juan, it offers a quick hit of warmth that stays with you.