A Bigger, Boozier Troquet on South Opens in Early March

While chef Scott Hebert is still making fine French cuisine, it's pretty much an entirely new wine bar and restaurant. 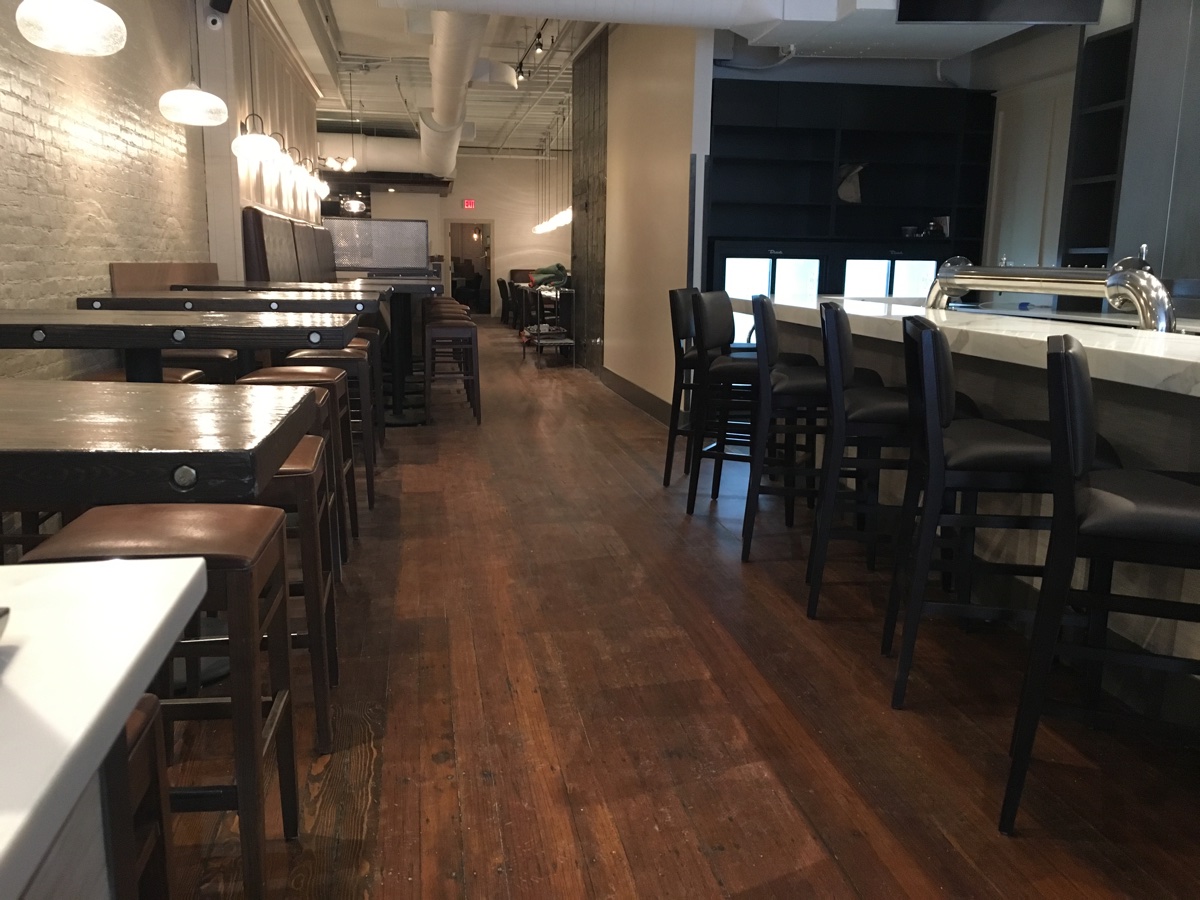 The bar area at Troquet on South. / Photo by Jacqueline Cain

Troquet has earned an outstanding reputation for wine on Boylston Street, and a move to the Leather District next month will give fans more room to get comfortable and enjoy it.

Troquet on South is on track to open in early March, with nearly triple the space for dining and drinking, expanded dinner hours and eventually, lunch service; an interactive Champagne cart, more casual bar offerings, and more.

An alum of Charcoal in Venice, Calif., Study, Journeyman, and other restaurants, Tringali joined Troquet owners Chris Campbell and chef Scott Hebert a few months ago in anticipation of the expansion. Previously, Campbell managed the floor during service five nights a week. With the move, Troquet will be open nightly, and in the coming weeks, lunch (and potentially brunch service) will be added into the mix.

“For the past couple years, [Campbell has] been looking for a space that more fits his vision,” Tringali says.

A large part of that is a place with a more comfortable bar and lounge area where guests can delve into the award-winning wine program. The new location also has a 25-seat private dining room in the back, which will host wine and scotch dinners and other special events.

Up a few stairs from the entrance, Troquet on South has a lengthy, white marble bar that can seat a dozen comfortably. There are also several high-top tables with seats and tall banquettes for casual dining, and a communal table made from a vintage leather stretching machine. That piece is from the location’s former life as a shoe manufacturer, Tringali says.

The by-the-glass list will grow to more than 50 options, and the cellar will continue to carry hundreds of Old and New World varietals. But Tringali says Troquet will use its expanded bar area to remind guests it has a full liquor license, too. The team has brought on Matt Marini, who has worked at Hojoko and founded hospitality brand Pineapple Crossing, as bar manager. His new cocktail list focuses on grains and grapes—think whiskeys, bourbons, Armagnacs, cognacs.

“It’s an extension of what we already have in the dining room and our wine program,” Tringali says.

The kitchen will also benefit from the growing bar scene. Hebert is finalizing Troquet’s first-ever bar menu, which will have a seafood plateau, yellowtail tartare, lobster and avocado salad, and more raw bar offerings; plus a brand new burger, and classic French snacks like Camembert fondue, and escargot.

“We’ve inherited a pizza oven which we’re definitely going to use,” Tringali adds. Expect personal-sized, thin-crust pies with artisan toppings like lamb and bacon with caramelized onions, and white clam.

The main dining room will continue to offer classic entrées like beef duo with Bordelaise, whole-roasted Dover sole, and seared Maine sea scallops with squid ink pasta. But Troquet will add more shareable options, like the sucking pig for two currently on the menu.

The cheese cart is coming along to the Leather District, and sommelier Campbell is also rolling out a brand new Champagne cart with some classic French bruts, an American variety, and likely a rosé.

“It’s a lot of fun,” Tringali says. “We’ll tour it through the bar and when guests see it, we make friends very quickly.”

While it will be bittersweet to say goodbye to the original Troquet’s Boston Common views, the team is looking forward to putting down roots in the busy downtown neighborhood near Les Zygomates, Chinatown restaurants, Townsman, and more.

“We want people to come here and go there and vice versa,” Tringali says.

Troquet on South is eyeing March 1 for its grand opening. Dinner service at the Boylston Street location will continue through February 25.