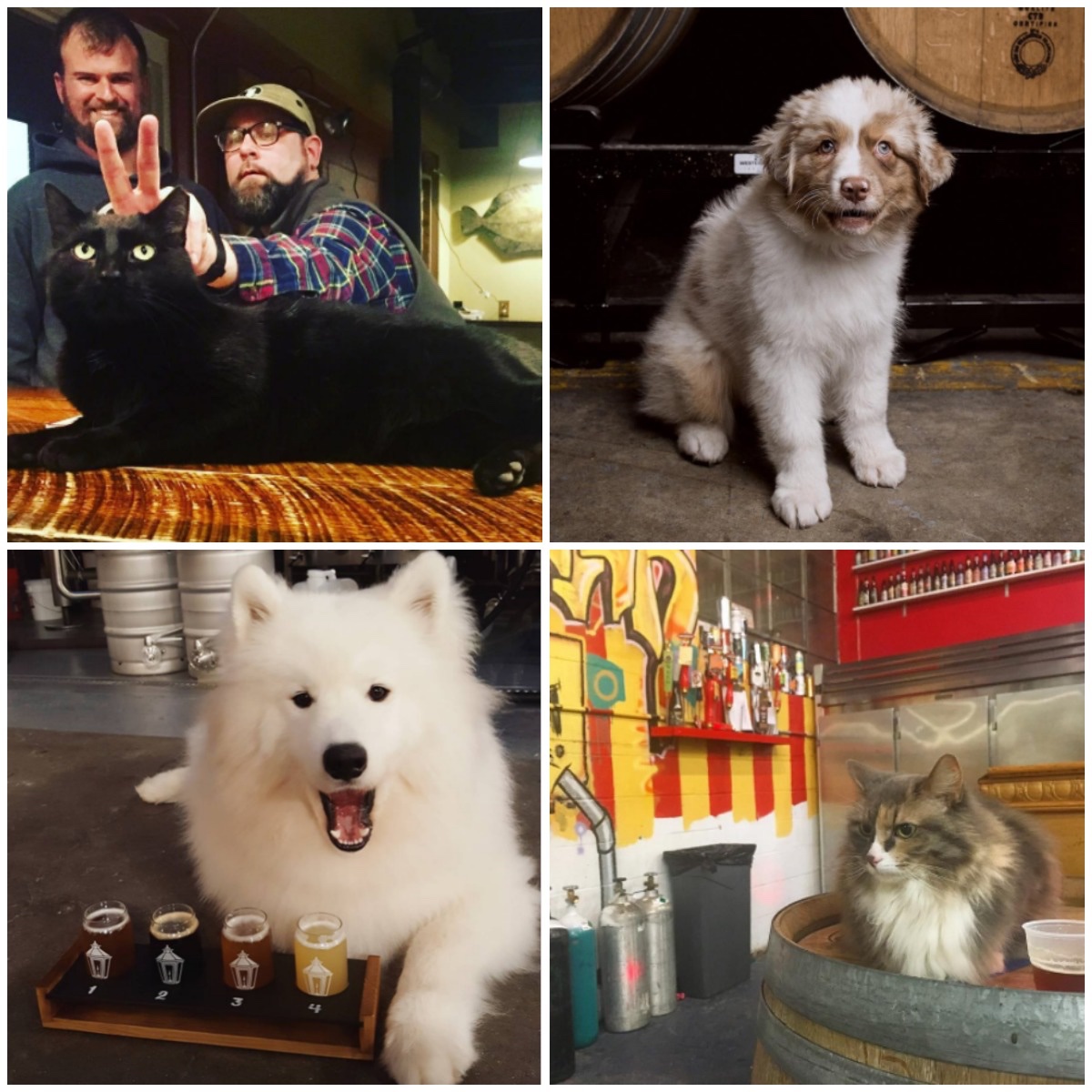 Love visiting New England breweries, and meeting friendly animals? You are not alone. From Westport to Easthampton, many local beverage producers have resident cats and dogs, and these critters often pop up on their brand’s Instagram accounts. Some have even created social media profiles devoted to their furry friends.

Whether for the practical skill of keeping the brewhouse free of pests, or for the incomparable companionship they provide, there are lots of reasons why. But one of the best reasons is the joy these animals bring to visitors. Just take it from the New York Times: In a recent article about waiting in line for beer, the accompanying slideshow features a photo of fans passing the time by petting Other Half Brewing’s Gangsta Cat.

Below, we rounded up a dozen New England breweries and cider houses that occasionally (or often) feature their own fluffy employees on Instagram—and even a few that have their own accounts. Meet any other good pups or kitties while you’re beverage touring around the region? Let us know on Instagram with the hashtag #bosfeed. For more four-legged fun, follow Instagram accounts like @CatsonTap, @DogsonTap, and @DistilleryCats for reposts from such animal-loving entrepreneurs around the country.

The fluffy friend of Lamplighter Brewing Co. is also very active on his own Instagram account, @Barley_the_Samoyed.

Best thing to do on a rainy Tuesday? Hang with Barley and drink a flight. Open until midnight tonight! #rainraingoaway #fluffmonster #lamplighterbrewing #drinklocal #beerstagram

Trying to be a lap dog. Not working.

Blumpy doesn’t have her own Instagram account, but she does have her own hashtag—#wheresblumpyat—which is used by a few Thomas Hooker Brewing (@hookerbeer) humans. (Update, July 21, 2017, 10:30 a.m.: We are sad to report that Blumpy died this week. She will be missed.)

Our ninth batch of Field Beer is our best yet. This batch features Connecticut grown conlon barley from @valleymalt fermented with a blend of house cutures that produce a bright, peachy tartness. Most of the batch will be heading to Amsterdam for @carnivalebrettanomyces but we have cases reserved for sale at the brewery this weekend along with freshly fresh batches of Glitter Rainbow and Napkins for growler fills. And arrive tomorrow. . . . . #farmbrewery #knowyourbarley #knowyourfarmer #knowyourbrewer #ctbeer #nofarmsnobeer #mixedfermentation #fieldbeer

Dizzy, mouser-in-chief at Oxbow Brewing’s farmstead in Newcastle, Maine, is a bit elusive on Instagram. Follow @oxbowbeer and @oxbownewcastle in hopes of an occasional glimpse—and the farmhouse brewery has chickens and pigs, too.

Our pigs getting there fruits and vegetables. Strive for 5. #pigs #farmhousebrewery #oxbowbeer

The orange fluffball Dizzy has become quite the beloved #brewerycat …but who remembers our original malty mouser, Matilda? She was the best! #cats #mainewinter #mainebeer #thisisnewcastle #newcastlemaine

#MeetNSB: Tap may not be able to pour a beer, but she’s an integral member of the #NSB team. Along with her older sister @growler_pup, she runs point on face-licking and chew toy responsibilities. When asked how she keeps up with the brewery’s rapid expansion, she hurried off to investigate a smell by the staff fridge #TapTakeover

Meet the neighborhood watch. Don’t mess with this patrol! #aussies

Havoc at Buzzards Bay Brewing, aka @buzzardsbaycat, sometimes features his friend, Meow Zedong, who roams up the road at Westport Rivers Winery.

Rubs by the fire @buzzardsbaybrewing

Hermann has popped up a few times on Downeast Cider’s Instagram since he joined the team.

Our brewdog Kelsa, and her favorite morning routine. #bissellbrothers

Mitzy helps when 603 Brewery has to tell fans it’s closing early because of the New Hampshire winter weather.

It’s another Snow day… we will be closing at 3pm today. Please be safe out there!

Here’s hoping Odel is on taproom duty when you visit Fort Hill Brewery on your next Easthampton beer crawl.

It’s Thursday and Odel is on growler duty! Just kidding, but she will beg you for pretzels. Taproom opens at 4 pm. #craftbeer #easthampton #dogsofinsta #drinklocal

Otto the Weimaraner doesn’t have his own Instagram profile, and the good dog typically stays out of the way if he’s at the cider house during taproom hours. But give Bantam Cider a follow because when Otto does grace their profile, you don’t want to miss it.

Even Otto is feeling those rainy day blues. Come brighten up your day with some scrumptious cider! Taproom is open 12-6.

Roast Beef, a.k.a. Keeper of the Barn, on her nighttime perch following another busy weekend. Gearing up for this weekend already with a fresh batch of The Other One DIPA on the way, among other things. Stay tuned.

Great day for a swim after a long, cold weekend. Thanks to everyone who came out and braved the cold in line, we appreciate the support. See you next weekend. Cheers! #farmdogs #summit #tupelo #tiltedbarnbrewery

Stout is an ideal name for the English bulldog on the Backlash Beer team. When the makers of Ricochet IPA finally get their own home in Roxbury later this year, we hope we see more of him.

Winston is one of a couple resident dogs at Down the Road brewery in Everett. And every Wednesday, bring your own four-legged friend to the new spot.