Why Boston foodies should be rooting for DTX’s tony new Japanese izakaya to get its act together already. 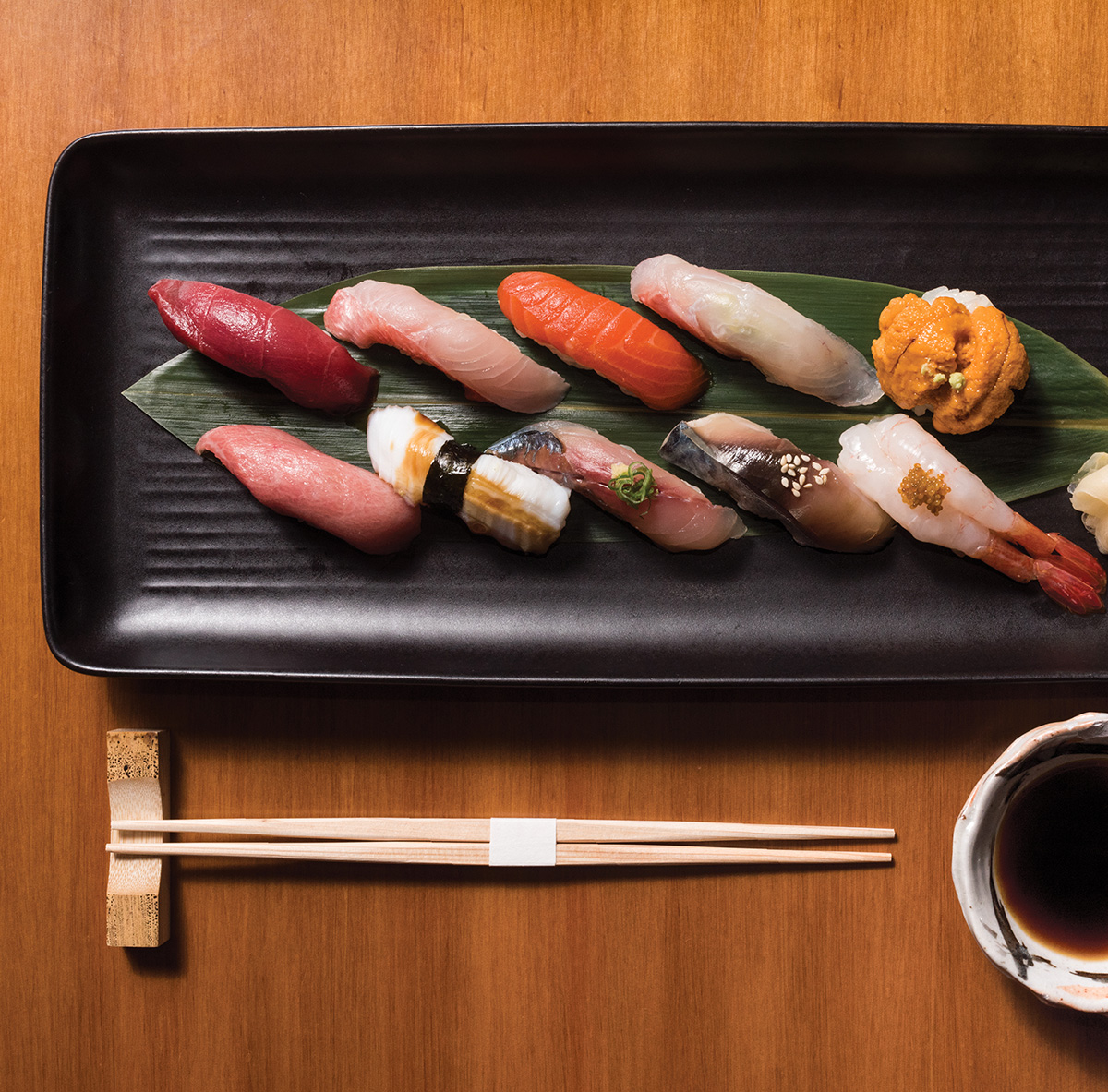 If you haven’t spent an evening traipsing around Downtown Crossing lately, by which I mean the past six months or so, you really ought to try it. Overeager municipal flacks may have forever diluted buzz phrases like “urban transformation,” but here it’s the honest-to-goodness deal. There’s a new energy; a not-unappealing Disney-ish sparkle coming from the season’s bumper crop of luxury condos, hotels, and blue-chip bars and restaurants targeting not just tourists but also discerning locals. Even the shadowy grifters offloading dried-oregano dime bags onto dewy-eyed Emerson night owls seem to have an extra spring in their skulk.

Plenty of credit to go around for this dramatic downtown revamp. It would be hard, however, to overstate the impact of the new Millennium Tower, that socio-architectural marvel of residential living that filled the gaping hole left by Filene’s. It’s had a profound anchoring effect on the area: like that last stake of a camping tent that magically pulls all the loose fabric into a taut and viable form. Even skeptics concede the developers nailed it on most fronts, right down to the whitewashed-oak finishes. Likewise, Pabu, the high-end izakaya (Japanese gastro-tavern) and sushi joint ensconced like a jewel on the second floor, feels right on the money for 2017, when Bostonians can’t seem to shove enough upscale Japanese small plates down our collective throats. And who can blame us? I’m not necessarily saying O Ya and Uni are the city’s two best restaurants right now, but I certainly wouldn’t rule it out.

Part of the restaurant empire of Michael Mina, the Bay Area chef who rocketed to stardom in the mid-aughts on the strength of his eponymous fine-dining flagship, both Pabu Boston and the original San Francisco outpost are helmed at the corporate level by Mina and veteran sushi master Ken Tominaga, with executive chef Ben Steigers running the Boston kitchen. On paper, at least, it would appear to be a slam dunk. 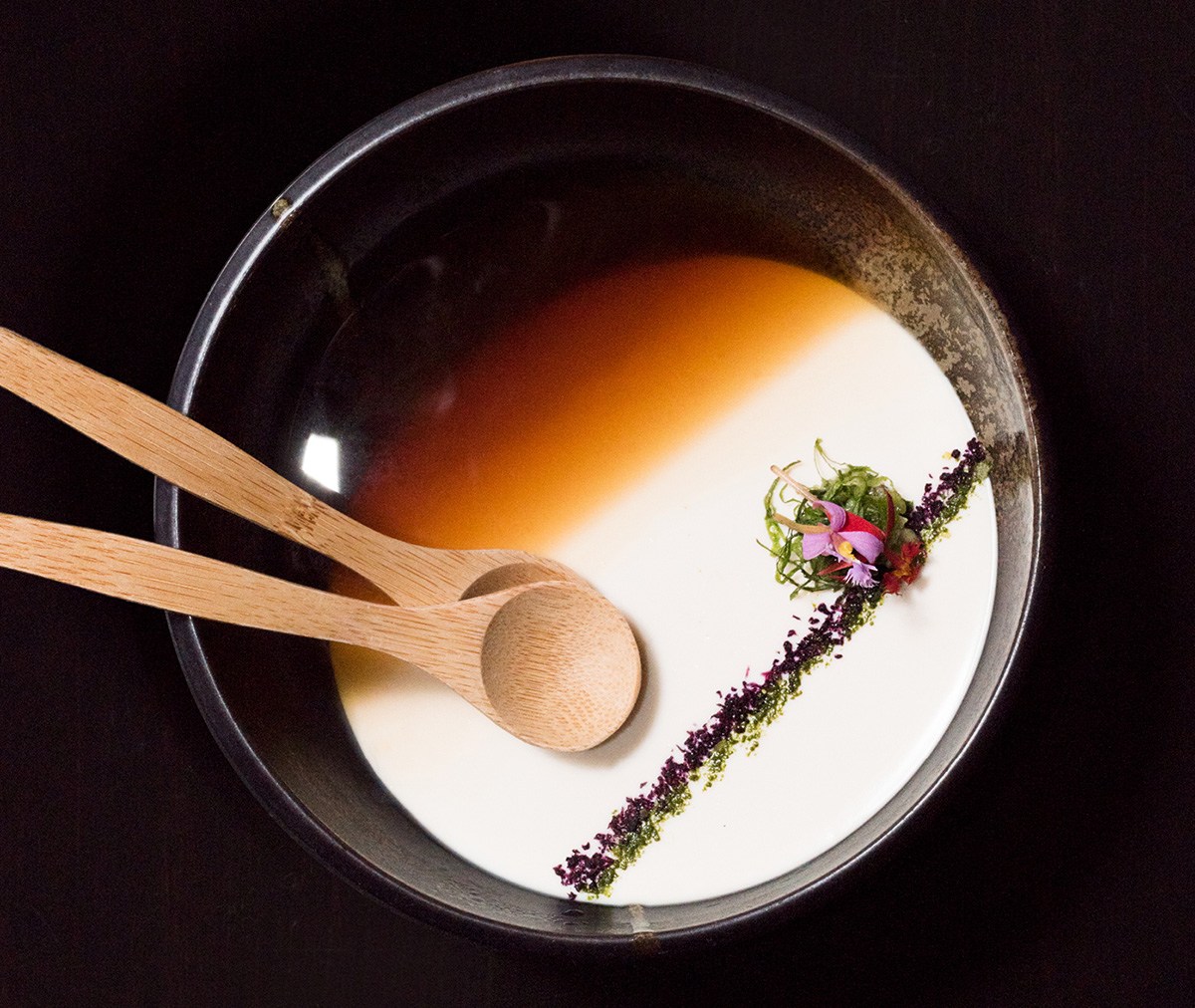 Here’s the thing, though. Pabu Boston is not a slam dunk. Not as of press time, anyway. Nearly three months in, I was still encountering dishes that weren’t just subjectively lackluster, they were actually off. With a few important exceptions, service fluctuated from benign wobbliness to full-on chaos. And if I’m quibbling, even the crisply executed parts of the menu may be too garden-variety given the caliber of the local izakaya landscape at this lofty price point. Put another way: It can be hard to get excited over a $21 rainbow roll, no matter how flawless, in a town where Uni’s putting out the inventive likes of yellowtail maki dolled up with Tokyo leek and burnt-allium vinaigrette for 14 bucks a pop.

Don’t get me wrong. There were also moments of excellence—exhilarating glimmers of the restaurant I think Pabu could be. The lovely whole squid ($17), grilled to a perfect burnished char over binchotan coals and dusted with togarashi chili powder. The ace sake sommelier, Mayuka Yatomi, who one night took my party of three on a fascinating, impromptu romp through some terrific off-the-beaten-path junmai daiginjos. There was the polished service on my third visit. And there was the fourth (yes, fourth) time I rolled the dice on the chicken-skin skewers ($6) and they finally arrived crisp, gently seasoned, and devoid of rancid-oil off notes. To be fair, some restaurants take longer to coalesce than others. But after dropping more than $2,400, including tips and a few pricey sakes, over four visits, you too may find that your patience for dodging bullets wears thin.

Take the robatayaki section, an ambitious roster of skewers that get cooked on the robata grill over binchotan coals—traditional Japanese hardwood prized for a clean smoke flavor. My favorite was the chicken wing ($7), its deep-mahogany exterior glistening with assertively seasoned tare. Ten out of 10. Tsukune meatballs ($8), made with dark meat and schmaltz, were light in texture, rich in flavor, with naughty pockets of unctuous fat. Swoosh! Solid 9. Just when you’re riding high, out comes a plate of sake-cured chicken hearts ($7) so offputtingly smooth, beige, and fridge-cool to the touch that you’re done after a single perfunctory bite. 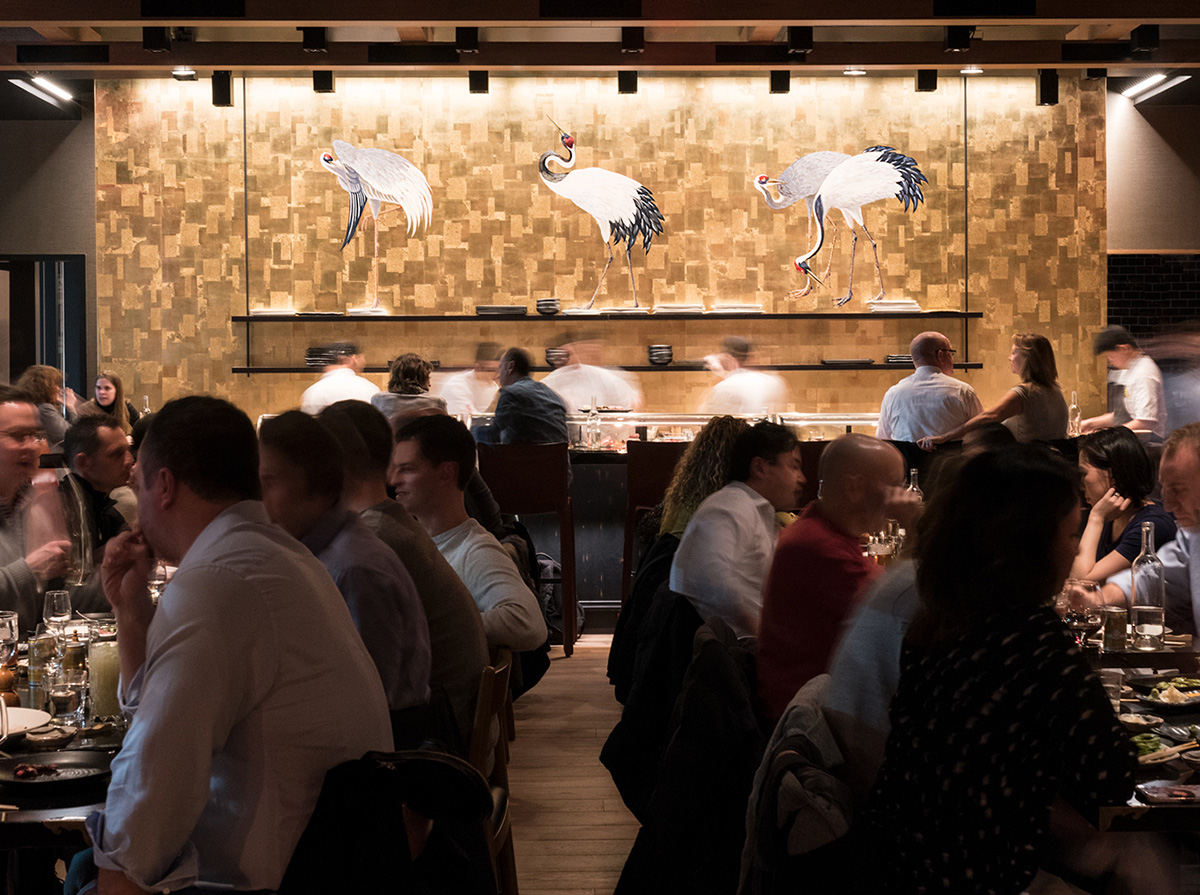 Ingredient sourcing, by contrast, is unimpeachable. Fans of unadorned, edomae-style nigiri and sashimi will thrill to the quivering lovelies flown in from Tokyo’s Tsukiji fish market. Meanwhile, maki rolls, by and large, stick to the well-worn hit parade: I’d skip the basic likes of, say, the salmon-avocado roll ($15) in favor of the handful of more inventive options. Loaded with gorgeously marbled bluefin tuna belly, scallion, ikura (salmon roe), and sea urchin, the “Michael’s Negitoro” roll ($26) was a dream. Speaking of gorgeous marbling, Pabu brings in A5-grade Wagyu beef, served as a skewer ($28), nigiri ($17), or butter-basted and smoked in a portable donabe (clay pot) for a splurgy $28 an ounce.

A few notes about service, which could use some sharpening across the board. “Pretty popular” isn’t quite the level of intel I’m going for when asking about an unfamiliar variety of fish (see: ocean trout sashimi, $15). More problematic, though, is the house recommendation that entire orders be placed at once—despite the venerable izakaya tradition of unstructured ordering—which Steigers told me is to ensure a “well-paced experience.” The irony! As much as I pleaded with our server to keep the pace slow, as a rule the parade of plates was a haphazard barrage. One night, I instructed my guests to resist their natural impulse to accommodate—let the runners figure out where on our tiny table to place the ridiculous number of dishes being sent out per course. Sure enough, the panicked staff stood around helplessly until a manager showed up to Tetris the chaos.

Which is a fitting metaphor for the dining experience at Pabu as a whole—you could get whiplash from all of the ups and downs. From a purely civic-philosophy perspective, I’m rooting for Millennium Tower, a tour de force that so far has done everything right, exceeding expectations. Hopefully one day the splashy restaurant inside its glass walls will do the same.