The first kegs and cans sourced by the brewery-born sales company have landed in Boston. Meet the new kids in town—and have a drink. Night Shift Distributing is rolling out its first pallets of beers this week, with new-to-Boston releases from New Jersey, Maine, Germany, and more.

The first partners with the brewery-born distribution company are New Jersey’s Magnify, Mast Landing, a lesser known Maine producer; Good Measure, a new Vermont brewery; Pipeworks out of Chicago; and Reinheits Boten, a New York-based importer of German brews. Try them in one place, and meet some people from their teams, at the official launch party tonight at Brewer’s Fork.

Night Shift announced its foray into distribution back in October, as an effort to shake up a branch of the beer industry that they—and others—say doesn’t always act with brewers’ best interests in mind.

“As brewery owners, we’re working collaboratively in any way possible with our fellow brewers, if they have issues, need advice, or have questions about equipment,” says Rob Burns, a co-founder of Night Shift Brewing and the president of the Massachusetts Brewers Guild. “Freshness is key: We’re ordering, selling, and getting the next order in. With Pipeworks, for example, we’re already 100 percent sold before they arrived in the warehouse.”

That’s a key consideration, especially for fresh, hop-forward beers. Pipeworks, which is on the Rate Beer Top 100 Brewers list, is best known for the dank and fruity Ninja vs. Unicorn double IPA (and its vibrant can art), among the lineup they’ll send to Boston. 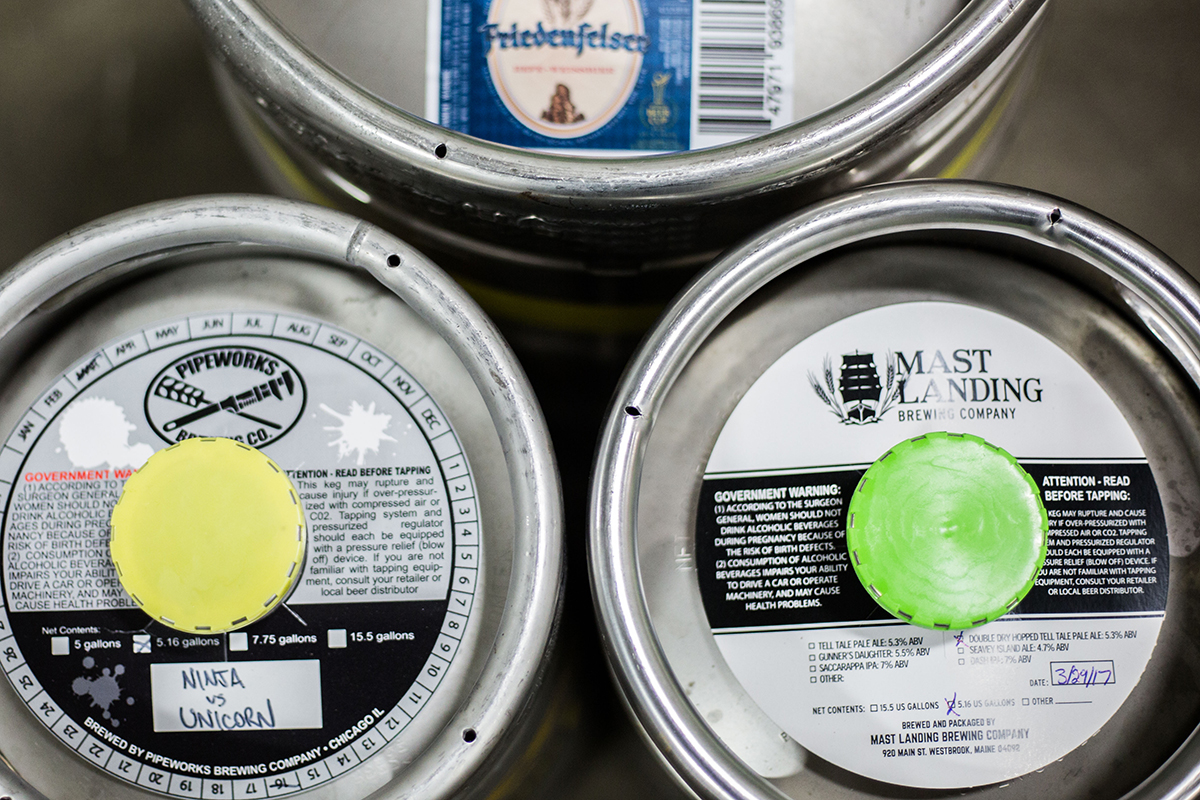 The Jersey brewery is also known for juicy, New England-style hop bombs. Magnify is tapping a few Mosaic-hopped kegs in Boston this week, among others.

Mast Landing is the first brewery in Westbrook, Maine, a former mill town outside of Freeport.

“They’re doing some delicious pale ales, and they have a cool niche with a peanut butter porter. No one is really talking about them in the Maine beer scene, so it would be fun to help get the word out about these guys,” Burns says.

To sign on the German importer, Burns actually read an article about the company in which they mentioned a desire to expand into Boston. Since Night Shift has always loved German brewing traditions, they thought it would be a great complement to their portfolio, Burns says. The five brands imported by Reinheits Boten include a few 100-plus year old breweries, as well as Braukunst Keller, founded in 2013, which adheres to German purity laws to make beers heavily influenced by American craft styles.

Just a taste of these newcomers are on draft tonight.

“There will be plenty of opportunity to try it around the city,” Burns says. “We’ve built pretty strong account relationships of what we believe to be the best spots in the area, and we’re excited to sell them more beer besides Night Shift.”

Keep an eye out for a list of locations on Friday, and in the meantime, find Night Shift Distributing tastings at liquor stores around town this weekend.