New restaurants will open in Cambridge and Copley Square, plus Bon Me carts and a Clover Coffee Bar. 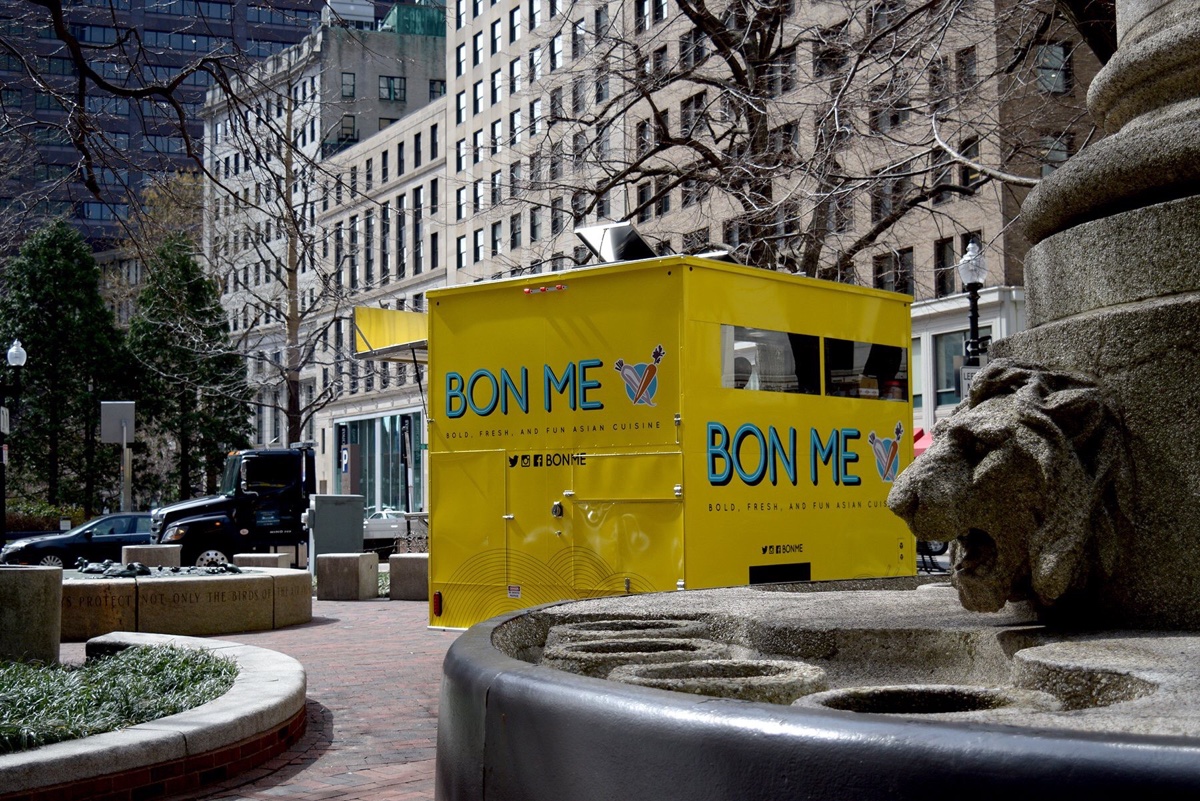 A Bon Me cart parked in Post Office Square. / Photo by Melissa Gelman, Bon Me, Provided

UPDATE, May 1, 5 p.m.: Bon Me just announced the location of its Copley Square brick-and-mortar: The Vietnamese-inspired sandwich shop is taking over a recently shuttered location of Freshii at 441 Stuart St. (185 Dartmouth St.), close to the Back Bay MBTA station. Construction on the 25-seat restaurant begins this week, and Bon Me will open in early June.

Fast-casual dining is officially taking over, with New York and other East Coast brands announcing Boston expansions seemingly every week. Now, two beloved, homegrown companies are doubling down on lunch options, too: Bon Me and Clover will both open new restaurants and introduce new offerings in the coming months.

Bon Me’s expansion has already begun: Two custom-built food carts have been set up at Copley Plaza and at Post Office Square since April 3. The custom-built, semi-permanent structures, a first for the food truck-born mini empire, are about half the size of Bon Me’s mobile eateries, but they still provide the full food truck menu of sandwiches, rice bowls, and noodle salads.

The Copley cart serves lunch and dinner daily, while the Post Office Square outpost is open for weekday lunch. They will be year-round, though they will go to sleep in an offsite parking lot each night.

“We love that our food trucks give us a way to bring our food to our city’s amazing green spaces, and the efficient footprint of our carts lets us bring our food to even more public spaces,” Rebecca Simonson, director of mobile operations, said in a statement.

In addition to the carts, Bon Me is adding an eighth truck to its fleet in May—and it’s opening two new restaurants. A Copley-area brick-and-mortar is on track to open in June, and a second outpost in Kendall Square is coming in August, says Bon Me marketing specialist Elise Yost.

The company isn’t sharing exact addresses yet, but the Copley restaurant will be just more than 1,100 square feet, with seating for 25. It will join the cart in satiating Copley Square. The latest Cambridge outpost is on Binney Street, and will also operate in addition to Bon Me’s original and flagship brick-and-mortar in One Kendall Square. The Binney Street location is just more than 2,000 square feet, with 58 seats. At this point, both new restaurants will serve Bon Me classics, but the team might add location-specific specials as the openings get closer, Yost says. 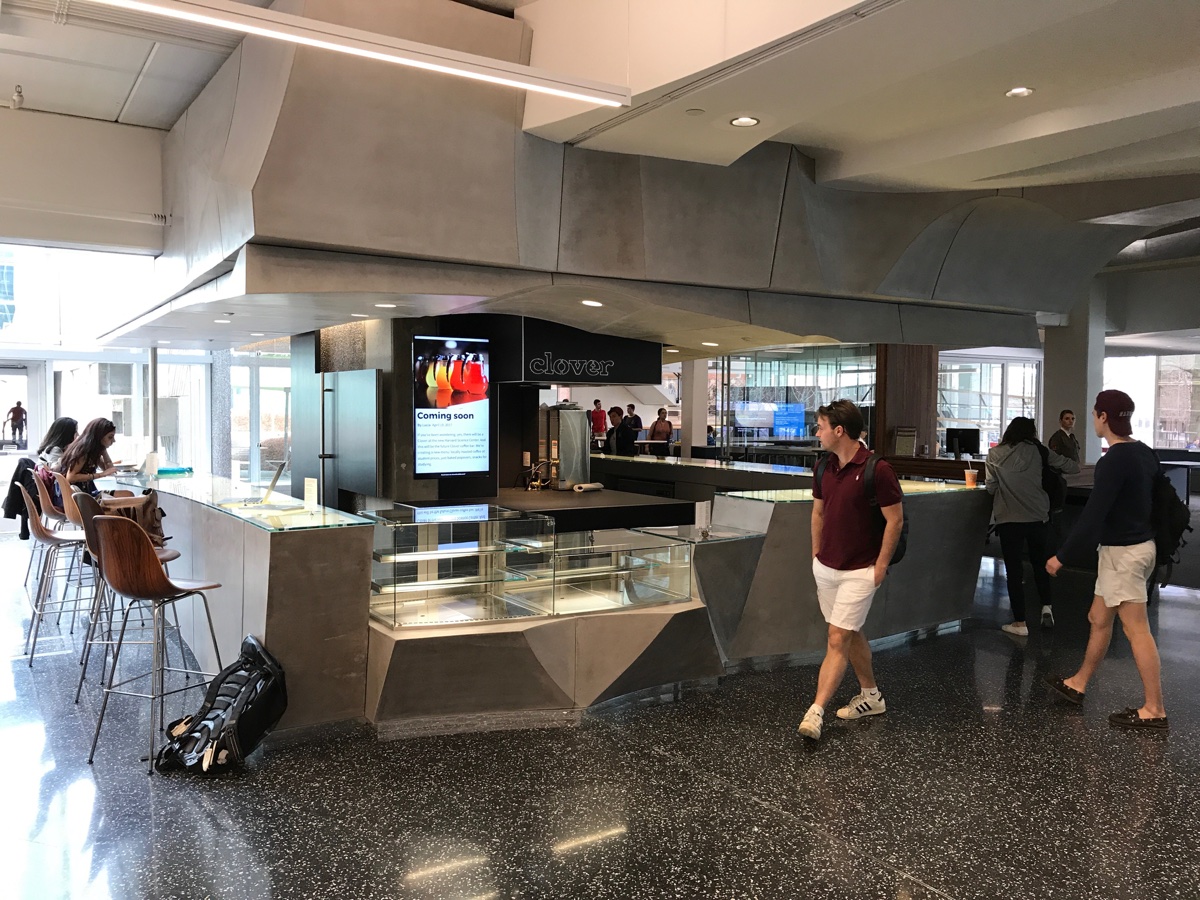 Elsewhere in Cambridge, Clover is opening a second outpost in Harvard Square, and its 11th brick-and-mortar; and a coffee offshoot. Pending final permitting, the vegetarian, locavore company will be the sole food service provider inside the newly reopened Cabot Science Center at Harvard University, Clover communications director Lucia Jazayeri said in a statement.

The latest Clover will serve breakfast, lunch, and dinner daily, and it will operate a “separate mini-business,” Clover Coffee Bar, next to the entrance of the library inside the Cabot Center. The pour-over coffee counter will have four, single-origin options daily, from Barismo, George Howell, Speedwell, and one local guest roaster. The bar will host tastings open to the community, and it will serve Clover’s coveted, limited-availability apple cider doughnuts.

Other offerings at the Coffee Bar will include house-made flavor syrups, like the ones former Clover employee Lucy Valena created at the late Voltage Coffee, Jazayeri said.

“We’ll be making brown butter to bake popovers all throughout the day, and we’re contemplating a whole area with grab and go items like thick PEI potato chips with just-made sour cream and onion dip, homemade crackers, local/seasonal fruit, chocolate energy bites, mini yogurts and cheeses, and selections of goods sourced from some of our favorite vendors, farmers, and producers,” she said. The team is also considering a popcorn popper, she added.

Lynn Sniffen, the manager at the other CloverHSQ for two years and formerly of multiple Magnolia Bakery locations in New York City, is manager at the new outpost. Clover founder Ayr Muir started the company in 2008, four years after graduating from Harvard Business School.

Clover was recently recognized by the industry publication QSR Magazine as one of 40 nationwide fast-casual brands to watch. “The pieces are all there” for the Boston-born brand to become “the next big thing,” the editors wrote. In such close proximity to budding Harvard entrepreneurs, this is likely only just the beginning.

Clover, opening at the Cabot Science Center, 1 Oxford St., Cambridge, this spring, and other locations, cloverfoodlab.com.