A Trillium Beer Garden Is Coming to the Greenway

Seriously. It opens this summer. 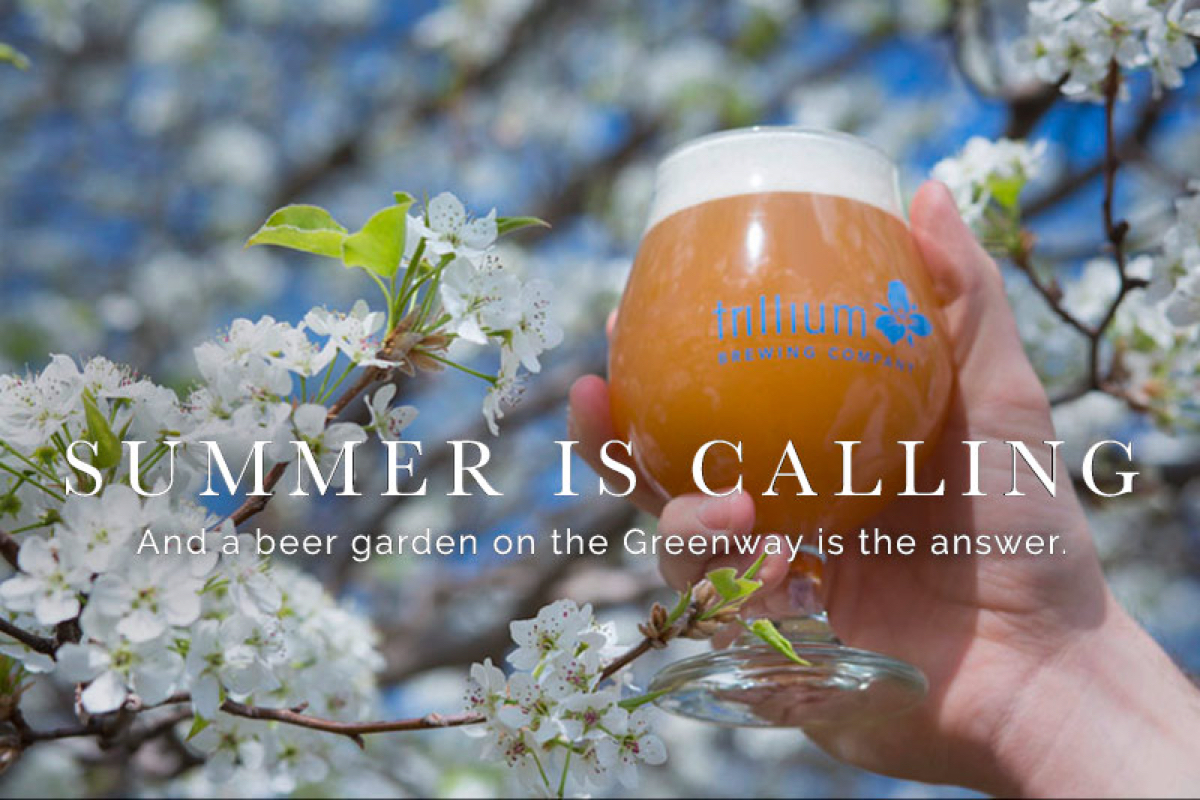 When the highly anticipated beer garden on the Greenway opens this summer, beers from none other than the venerated Trillium will be on tap, the park and beer-maker have just announced.

Many of the details have yet to be revealed, but in a news release, the Greenway gave us a preview of what’s in store. The space will be on the plaza on the south side of High Street, right across from Rowes Wharf and the Boston Harbor Hotel. There aren’t any public renderings of how it will look just yet, and it isn’t clear what the capacity will be, but the space will have a “communal picnic-table aesthetic.”

A rotating selection from Trillium beer will be on tap, and there are also plans for Trillium to serve a Greenway-exclusive brew. Pending approval of permits, the outdoor bar is expected to be open 3-5 days a week beginning sometime this summer, and the plan is to keep it open until October.

In a release, the Greenway says it considered proposals from several other breweries and restaurants, but settled on Trillium, and said it was “excited” to do so.

“The Greenway Conservancy brought food trucks and contemporary public art to Boston, and we expect the Beer Garden to be another innovative offering on The Greenway,” Greenway Conservancy Executive Director Jesse Brackenbury says in a written statement. “We’re so excited to present Trillium’s world-class beers in our beautiful park setting.”

In just four years, Trillium has become one of the region’s most sought after beer brands and garnered acclaim around the world. But it’s still not all that easy to get your hands on one of their hoppy creations. The beer-maker does not have a taproom in Boston, although it has indicated it’s in the market for a Boston brewpub, and it did branch out into Canton last year. At their postage-stamp-size brewery in Boston’s Fort Point neighborhood, the beer-maker sells growlers and reams of tall boys, but visitors aren’t allowed to drink pints of the product, or even taste it, on site. And right now, only a select few Boston bars carry Trillium. So locals have been clamoring for more ways to get their fix.

“Finally having the opportunity to pour our beers in the heart of the city we love is a dream come true,” says Trillium co-founder Esther Tetreault, in a statement. “Our team has been waiting a long time to welcome people with a beer in Boston and we are thrilled to do so in one of Boston’s best public spaces!”

Wine will also be served from the Massachusetts-based Westport Rivers Winery, which has gotten a good deal of attention itself, including from this magazine. A fun fact, according to a news release from the Greenway: The Westport Rivers Winery is where Trillium co-founders JC and Esther Tetreault got engaged. The two of them will be curating the varietals chosen for the space.

The partnership should also help the park pay the bills. Pressure has mounted on the overseers of the popular public space to generate more revenue, particularly as a big dip in state funding kicks in this June. On its blog, the Greenway says it expanded its revenue to nearly $1 million last year from events, food trucks, a carousel, marketing contracts, and other public offerings. If you like the Greenway, sipping a brew there after work is but one way to lend a hand.

The Greenway has dabbled in open-air adult beverages before, selling beer and wine at its outdoor Boston Calling Block Parties held in Dewey Square. And the park is following in the footsteps of Boston Winter, the successful ice skating-and-shopping concept that debuted on City Hall Plaza last year and included a sheltered ski lodge-style bar.

Meanwhile, if this is your kind of thing, the city is weighing a full liquor license for the Lawn on D.

Excited for summer yet?