The Brewsters' Arm Wrestling League has its first bout in Somerville this spring. 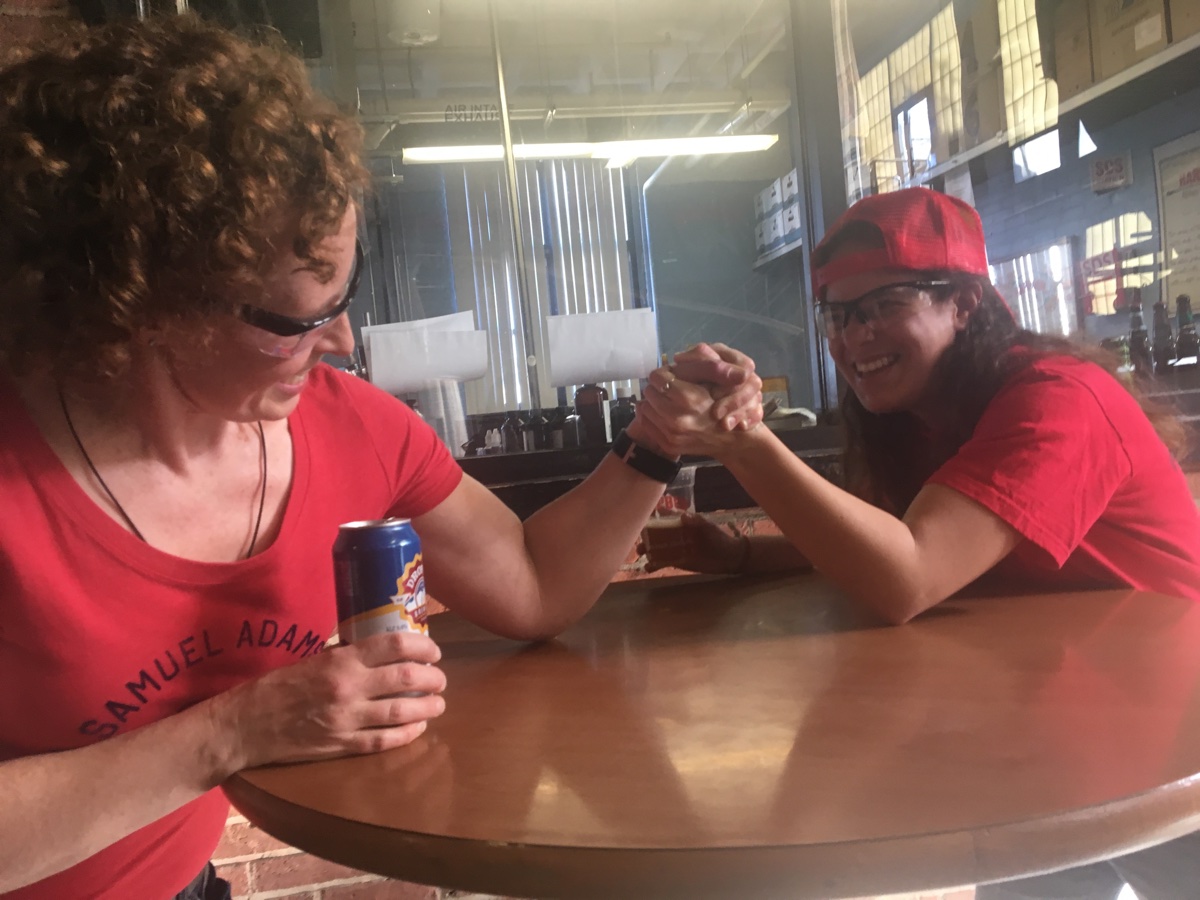 Andrea Stanley had just finished shoveling about 4,000 pounds of malt from the floor of her Hadley malthouse this morning when she answered a reporter’s call, so it’s a safe bet to assume she has pretty strong arm muscles. But she’s going to prove that later this month: The Valley Malt owner and maltster is heading up the Brewsters’ Arm Wrestling League, whose inaugural bout is happening Thursday, May 25, in Somerville.

“I just hope I win,” says Stanley, who will go by the name the Grain Reaper in the ring (or, the bar).

It was late winter when she first heard about fun, but competitive, arm wrestling. Through Facebook, Stanley was invited to a farmer-centric brawl with the Western Mass Arm Wrestling Ladies at a local VFW hall.

“It was a total blast,” she says. “The women are in costume, they have these [wrestling] personas. The audience was a lot of guys in the farming community. Everything about it had a great feeling.”

Less than a week later, she was at Harpoon Brewery in Boston with about a half-dozen fellow women in the beer industry—the Pink Boots Society—making a special brew in honor of International Women’s Day. While the group was waiting for the mash to convert, Stanley asked if anyone wanted to throw down.

“We cleared off a table, and started doing some arm wrestling,” she says.

She told the group about the event she had just attended, and the idea to start a female brewer-focused arm wrestling league was born.

Stanley co-owns Valley Malt with her husband, and together they provide malts for Trillium, Mystic, Cambridge Brewing Company, Jack’s Abby, Dogfish Head, Honest Weight, Sierra Nevada (N.C.), and more breweries along the Eastern Seaboard. Overall, she has, personally, found the beer industry to be very inclusive to women, she says.

But “a lot of the underlying motivation for this is the aftereffects of the election,” Stanley says. “I feel like I need to be a little bit more active about being feminist. This is kind of a fun way to assist that.”

The inaugural Brewsters’ brawl is a benefit for Girls Rock Campaign Boston, the local chapter of a non-profit that provides young women with opportunities for self-expression, confidence, and collaboration through music. It’s an apt recipient.

“I don’t know what the feel will be [at the showdown], but I’m pretty sure it’s going to be empowering. That’s partly why it’s arm wrestling: It’s a chance for us to be competitive and strong—those aren’t necessarily opportunities women and girls get,” Stanley says.

Eight competitors, including Brazo Fuerte Artisanal Beer founder Bev Armstrong, BABES founder Kristen Sykes, and Stanley, will be matched in three rounds of arm wrestling, bracket-style. Each woman has created her own wrestling persona, and chosen her own theme song. There will be entourages hyping up the crowd. Stanley, who knows how to weld and plasma cut, is making an exclusive, leather championship belt with a medallion cut from a stainless steel keg.

After she created the Facebook event for the showdown, competitors with Mass State Arm Wrestling and Granite Arms New Hampshire, two professional leagues in the region, reached out and invited Stanley to a bout in Allston, which she and Maureen Fabry of Craft Roots Brewing attended last weekend. The newbies learned the rules of the sport, plus how not to hurt themselves, Stanley says. Members of the pro leagues will referee the Brewsters’ bout, and an hour before the showdown, they’ll give a crash course to all participants.

“The size of their biceps is probably the size of my thigh,” says the maltster, laughing. But she held her own: Stanley won during the Pink Boots brew day, and the pros were impressed with her strength, she says.

“Maybe I could do this professionally?”

If the Brewsters’ Arm Wrestling League has anything to do with it, Stanley won’t be the only woman wondering the same thing.