Variations on a Theme: Mediterranean

With a parade of Mediterranean dishes descending on Boston, it’s suddenly chic to eat Greek. 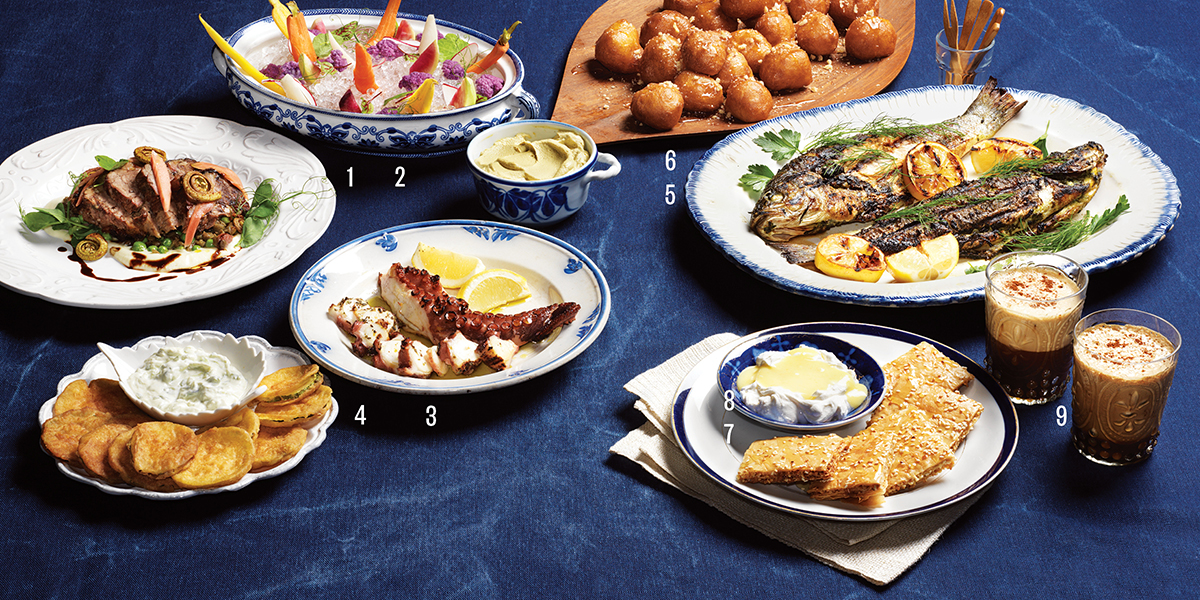 It takes culinary confidence to invite a less-experienced chef into your kitchen to overhaul the menu. Last fall, Michael Schlow did just that, tapping Pelekasis pop-up creator Brendan Pelley to put a fresh spin on his modern Greek taverna in Park Square. The result? Spot-on collaborations such as lamb shoulder (1), slow-roasted until fall-apart tender, pressed into a terrine, and cooked confit-style; and new Pelley creations including dynamic crudités with pistachio skordalia spread (2). Featuring just-picked seasonal vegetables such as radishes and purple cauliflower, it’s playfully categorized as a “raw bar” selection.

Demetri Tsolakis grew up slinging gyros at his parents’ Springfield-area Greek fast-food restaurants. Now he’s on a mission to bring an upgraded version of his family’s fare to Boston. At Committee, where he’s a partner, that translates into shareable plates like this classic whole roasted branzino (5). Chef de cuisine Theo Tsilipanos, a L’Espalier alum from central Greece, stuffs the flaky Mediterranean sea bass with lemon slices and oregano before throwing it on the charbroiler. Over at Tsolakis’s new fast-casual spot, Gre.Co, pillowy loukoumades (6)—a.k.a. Greek doughnuts—drizzled with honey have quickly gained a following.

In 2014, when chef Jody Adams and partners Eric Papachristos and Jonathan Mendez came up with the idea for their fast-casual Mediterranean restaurant, “nobody was talking about Greek food,” she says. Now, as locals continue to queue up for their pork pitas and lamb plates, the team has opened a second location, in Cambridge, with more expansion plans in the works. Adams rounds out her mostly savory menu with a few not-to-be-overlooked sweets, including light, crunchy baklava crisps (7), custardy lemon-curd-topped yogurt (8), and the Greek iced-coffee drink known as a frappé (9). The surprising secret behind the bold, yet frothy beverage? Instant coffee.