From a savory special at Union Square Donuts, to a "greatest hits" lineup at Catalyst Cafe, you'll want to eat these treats right up today. 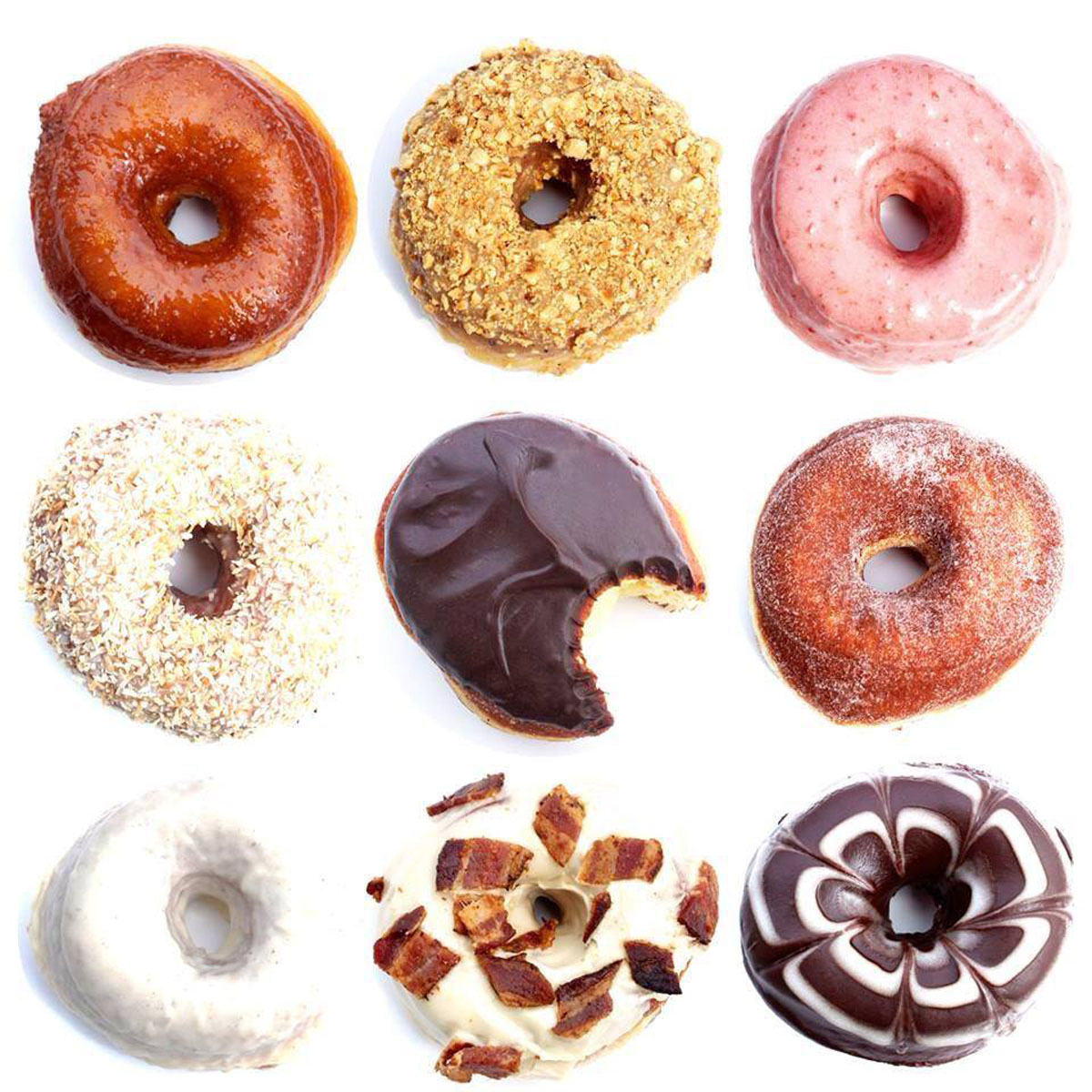 Healthy cuisine may be hot, but you know what else is? Luscious, gourmet doughnuts. It’s comforting to know that while it seems like a trendy new salad place is opening every other day, there are just as many fresh doughnut recipes being dreamt up around fryolators across the city. Celebrate this classic American dessert on National Doughnut Day with original flavors and discounted dozens. Check out these fun deals around Boston.

The bakery will be selling two exclusive new flavors: German chocolate cake, a black cocoa doughnut glazed in caramel, topped with toasted coconut, and sprinkled with chocolate chips; and a chocolate-covered banana doughnut. For the freshest, best selection, head baker Anna Perna recommends beating the crowd and taking advantage of the early 6 a.m. opening time, just for National Doughnut Day. In addition to the limited-release flavors, Blackbird will have its full menu available, from Coco-razz to Cold Brew Coconut.

This new-ish Kendall Square café is celebrating its first National Doughnut Day with a greatest hits lineup of the house-made doughnuts they’ve been making fresh every day. Chef and owner William Kovel says they’ll be serving up Boston cream pie doughnuts, maple bacon, vanilla-frosted with house-made rainbow sprinkles, cookies-and-cream (chocolate cake doughnuts with an Oreo cookie crumble), and cinnamon-sugar doughnuts. Catalyst first got into the doughnut biz after offering them on their brunch menu, and once they proved to be a popular item, they became a permanent staple of the morning pastry lineup on Binney Street.

The local chain, with food trucks and restaurants dispersed throughout Boston, Brookline, and Cambridge, is having a late National Doughnut Day celebration next Thursday, June 8. The coffee-and-doughnut event will be in collaboration with George Howell Coffee Roasters, at Clover’s Longwood Ave. location. The event is free and open to the public, but get a discount on your cup of coffee and doughnut by booking a ticket in advance, or pre-ordering a baker’s dozen. Can’t wait until next week? Clover’s apple cider doughnuts are available every day at its new Harvard location.

You can count on Boston’s favorite chain to come through for National Doughnut Day. At Dunkin’ today, get a free classic doughnut with any drink you buy, whether you’re a strawberry frosted or chocolate glazed kind of person.

Ranked one of America’s best doughnuts by Bon Appetit, Saveur, and Travel and Leisure magazines, these are some rockstar doughnuts. Today, Kane’s is offering a super dozen—15 instead of 12. Additionally, the company held a contest to design a new flavor for the holiday. Blueberry lemon zest was the winner, but the other two finalists, maple bacon apple pie, and banana coffee toffee, were so popular the company decided to keep them around through June, too. Everybody wins!

Look beyond bakeries and coffee shops for your doughnut fix today. Love Art Sushi is offering a new riff—for one day only: A doughnut-shaped round of sushi rice, slathered in your favorite toppings, from spicy tuna to avocado. They’re hosting an Instagram contest to win an exclusive sushi doughnut on the house, too.

This cult doughnut-making champion is going all out for National Doughnut Day. Inspired by the classic southern dish, chicken and waffles, they bring us their very own creation: Chicken n Donuts. This one-time-only flavor will top a brioche dough doughnut with maple glaze and seasoned fried chicken skin. Watch a video to get a sneak peak into the preparation, and pick one up to celebrate the one day a year that’s dedicated to the treats that USD makes every day.

Speaking of Union Square Donuts, if you don’t have time to make it to one of their locations, there’s good news for you. UberEATS users can request three free Union Square doughnuts—maple bacon, Vietnamese coffee, and cinnamon sugar delivered to them today, beginning at 11 a.m. To take advantage of this deal, first download the UberEATS app. Next, search “Donut Day” and select the “Free Donuts” menu item. Orders are limited to one per user, and the deal as a whole is limited to the first 300 orders that come in, so be sure to race to the app when the clock strikes 11.

If you buy a dozen of these delicious, cinnamon-sugar-coated mini apple cider doughnuts today, you’ll get six for free from the 100-plus-year-old, family-owned company. Red Apple Farm is one of Boston Public Market’s original vendors, and they’re based in Phillipston. 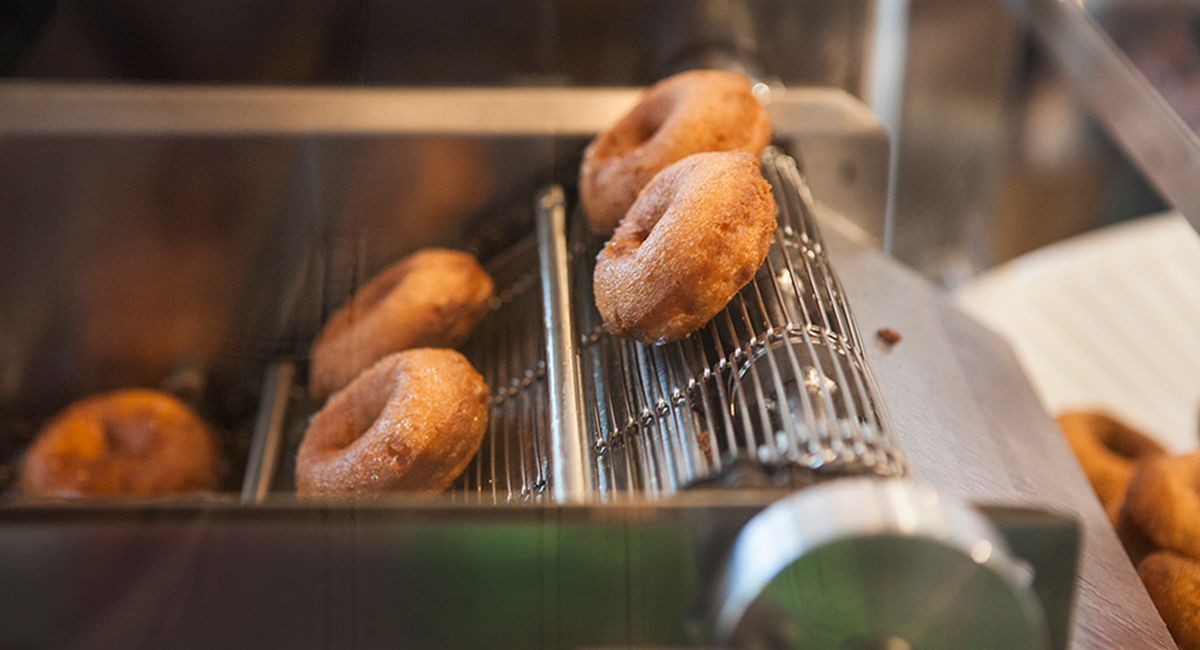