Three years, two children, and a host of national acclaim into the Portland Hunt & Alpine Club, Briana and Andrew Volk are looking to do something completely different with their second venture.

Their latest, Little Giant, has been offering a curated selection of groceries and quick-service breakfast and lunch options in the residential West End of Portland since December. On July 20, they’ll debut a family-friendly restaurant of the same name next door.

The Volks have the high-traffic, Old Port cocktail bar and the James Beard Award nominations to go along with it. But with Little Giant, they’re ready to provide another experience. Name-dropping Clyde Common in Portland, Oregon—which is actually where the couple met—and Boston’s Eastern Standard, Briana explains:

“The places that we really love, they fit into the overall philosophy of what we’re doing,” she says. “You can go [to Eastern Standard] on a date, and you know you’re going to have a great time, with great service and great drinks. We’ve done that. Now that we have kids, we just had dinner there with our 3-year-old and our 6-week-old. It was a very different experience, but the staff there absolutely knows how to navigate [that] and give each guest the experience they’re looking for.”

To achieve that balance at Little Giant, the Volks brought on a Boston ex-pat to lead the kitchen. Rian Wyllie, opening chef at Deep Ellum and both Lone Star Taco Bars, left that group after 10 years to relocate to Maine. Wyllie, an Arlington native, and his wife were considering a move when mutual friends introduced them to the Volks. It’s a perfect fit, both parties agree.

“We are going for a neighborhood vibe, so there will be a good mix of things on the menu and something for everyone,” Wyllie says.

“I think the thing I’m most excited about (bedsides living in Maine) is having access to all of the beautiful Maine ingredients,” Wyllie says. “Obviously the bounty of seafood is as good as you can get, and it’s all coming from the docks a half mile from the restaurant.”

Little Giant will also serve a selection of “Giants” for tables to share, like a whole-smoked chicken, and a whole-roasted fish. Pastas, cheeses, charcuterie, and more will be made in-house, with pastry chef Darcy Brennan Poor leading the bread and pastry program.

Brennan Poor, who lives in the West End neighborhood, has been with Little Giant’s retail shop and is behind treats like sticky buns and fresh cookies that will continue to be available there. Sandwiches on her breads will also continue to be sold at the retail shop, Volk says. Once Little Giant starts serving weekend breakfast, pastries will be available on the restaurant side, too. 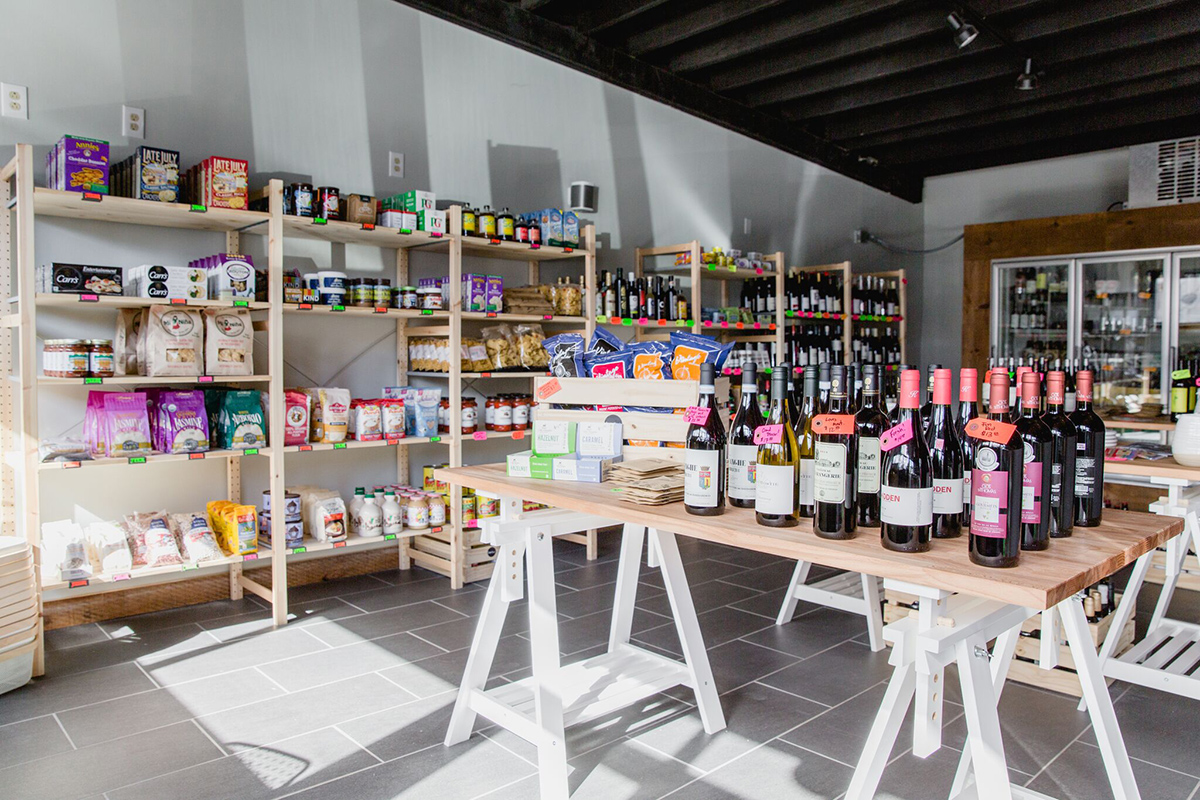 The store and restaurant will also work in tandem when it comes to the craft beer and wine selection.

“The shop will stay open about as late as the restaurant, so if a guest loves the wine they had, they’ll be able to go next door and grab it,” Volk says.

Little Giant stocks bottles from small producers and a wide selection of natural wines, not from a specific region, but that pair well with food, she says. To go along with the “Giant” theme, they also plan to have magnums and other large-format bottles. On draft, there will be a selection of six or eight, mainly local brews, plus a crowd-pleasing American lager of some kind.

And of course, there will be cocktails. In fact, Little Giant is already on the radar of Imbibe magazine, which named the forthcoming restaurant to its Imbibe 75 Places to Watch in 2017. Max Overstrom-Coleman, a Vermonter and 20-year hospitality veteran, is leading the beverage program, with a focus on low-alcohol sippers.

“Similar to European cocktail culture, like the idea of having an Aperol spritz with lunch, the drinks are not made to knock you off your socks,” Volk says. “You can have two drinks with dinner with your family, and feel good the next day.”

The Volks opened the Little Giant retail shop to introduce themselves to the neighborhood, and Briana says they’re excited for the second phase of their business to open.

Little Giant will seat 60 inside at a mix of booths and a communal table, plus a 10-seat bar. Later this summer, it will debut a courtyard patio hidden behind the corner property. It will serve dinner nightly, and breakfast on the weekends. Stay tuned on Facebook for opening details.