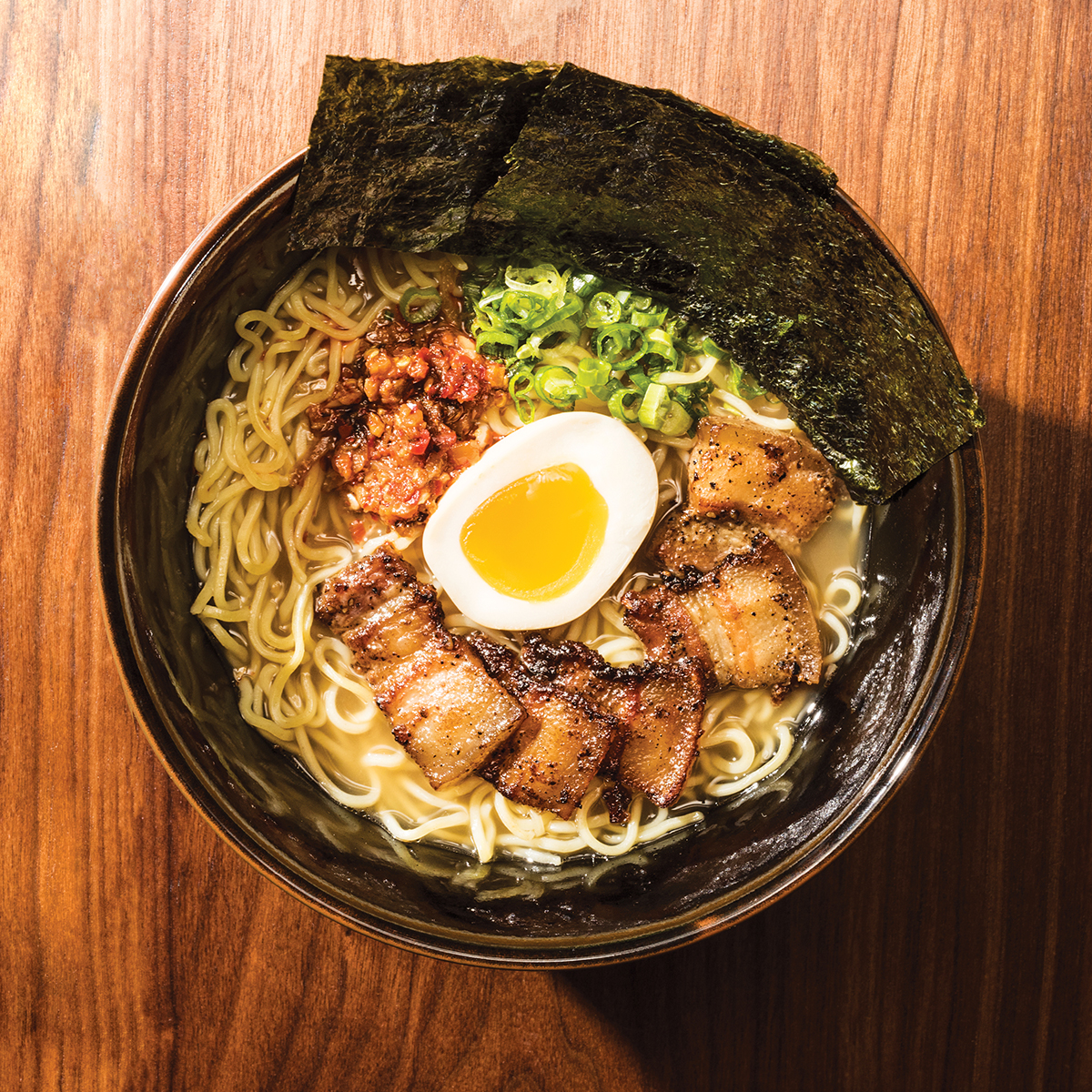 Holy jamón, where to begin? Tracy Chang’s Asian-meets-Spanish whirlwind in Central Square is an honest-to-goodness conundrum: an enigma wrapped in a squid-ink-hued bao bun dogged by squirrelly inconsistencies and, if I’m being forthright, a host of niggling unforced errors—right down to the serving temperature of the luxury imported ham.

In other words: tedious, nitpicking details. Which we’ll get to eventually. But first, some valentines. Because there’s so much this beloved restaurant-industry haunt gets right—specifically, the big, important, high-degree-of-difficulty stuff—that it only makes sense to crank out a few love letters before burrowing down the rabbit hole of granular-level drudgery.

Of all the area’s neighborhoods, Central Square’s singular vibe may be the toughest needle for restaurant owners to thread. There’s something about being wedged between Kendall and Harvard—two areas with tons more tolerance for lounge-y sleekness—that makes even seasoned vets lose their tonal compass (see: Moksa, Yoki, Floating Rock). Against stacked odds, Pagu nails the micro-local taste for gently filtered urban grit. From the shared tables embodying that oh-so-Cantabrigian community-minded spirit to the blissed-out soundtrack—disco jam at lunch, cranked-up Kendrick Lamar at night—the place exudes a subversively playful energy not unlike Little Donkey down the road or, better, the edgy thrum of New York’s Pig & Khao. Oh, yeah: the jaunty pug (English for “pagu”) logo. You could merchandise the hell out of that feisty pupster. 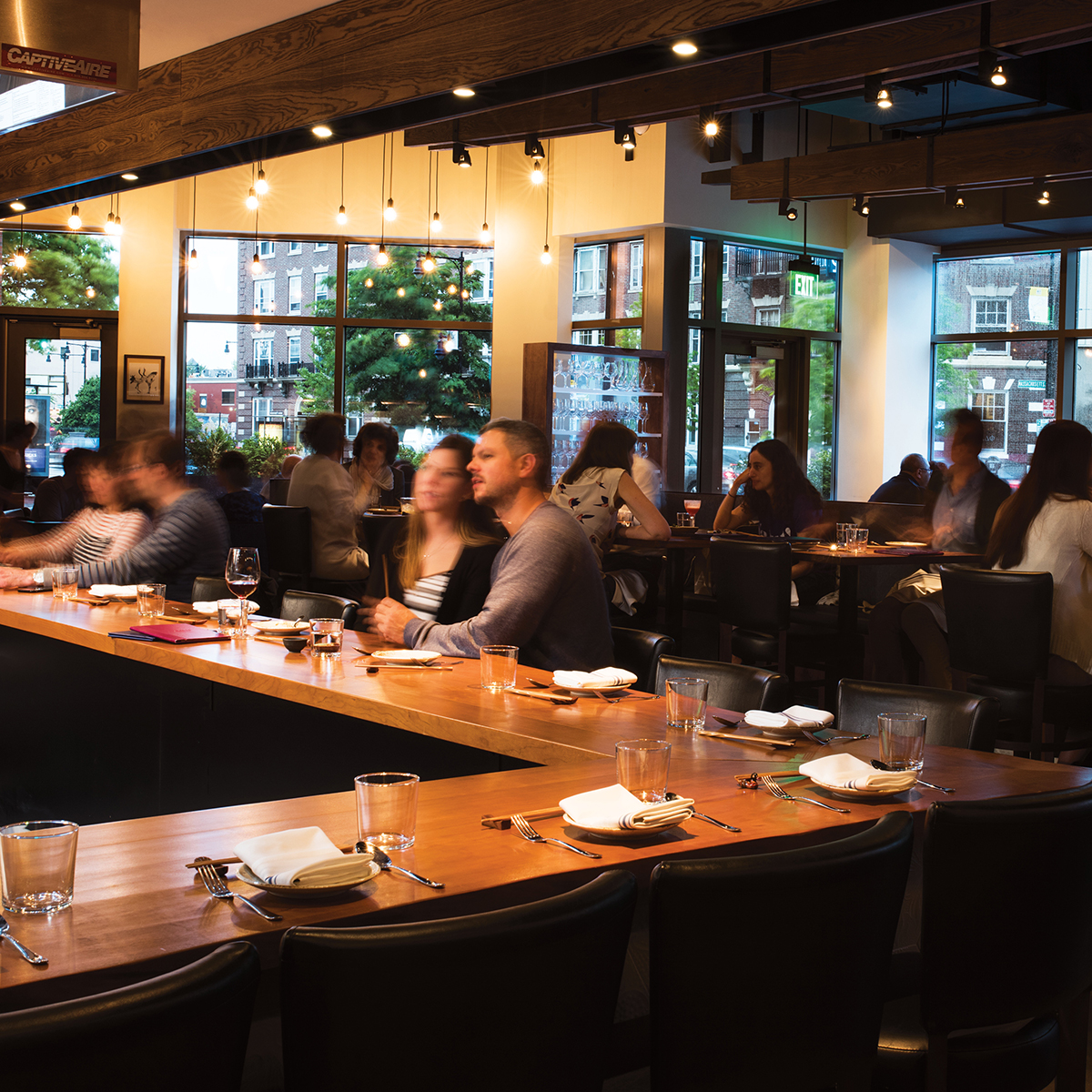 On its face, Spanish tapas and Asian small plates (mostly Japanese, with occasional Taiwanese, Thai, and Indonesian inflections) might seem unlikely bedfellows. But their functional overlap—drinking-culture sustenance—makes eloquent sense once you start drilling down. Chang has credentials for both, including stints at Martín Berasategui’s eponymous Michelin three-star, in San Sebastián, and O Ya. But local foodies will recognize Chang first and foremost as a cofounder of Guchi’s Midnight Ramen, the itinerant wee-hours pop-up that took night owls by storm from 2012 until 2015, when the principals disbanded to follow disparate dreams. Happily, her lineup of crudos, ramen, and bicultural bar snacks at Pagu feels about as on the pulse as it gets.

Sometimes that menu poetry translates beautifully to the plate. Delicate txipirones ($15, seasonal), frilly-tentacled baby squid no bigger than your thumb, get tossed onto the plancha to achieve perfect charred-edge crispness, set against the dark cello notes of mahogany-brown caramelized onions. Swirls of alioli brightened with lemon zest, sherry, and the fiery-floral citrus of yuzu kosho chili paste burst through all that somberness like a clarion light. Chicken katsu ($15), fried cutlets served sliced with soy-spiked alioli and “Pagu sauce”—an emulsification of caramelized shallots, ginger, soy, and shiitakes—could have been half as good and still worth ordering. 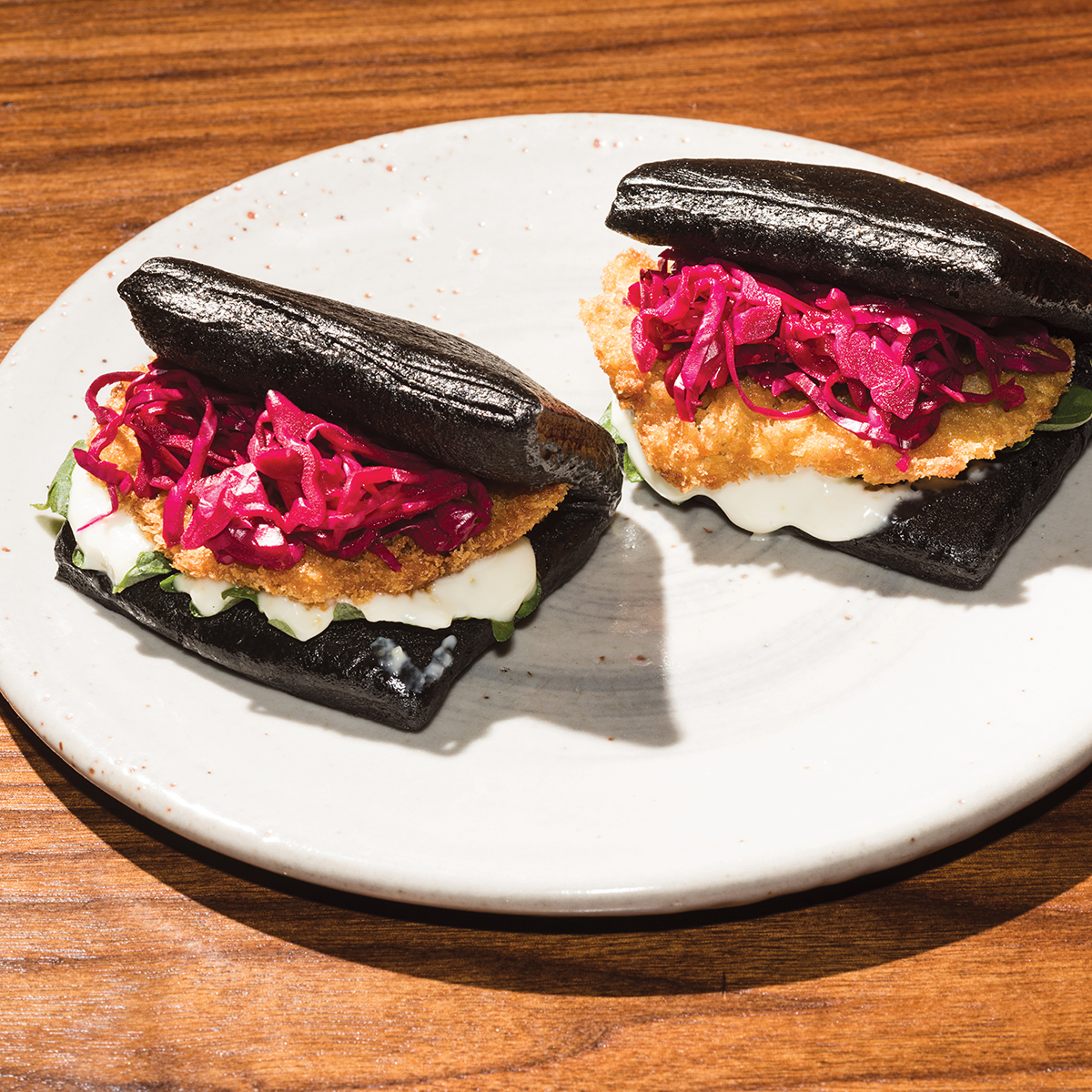 The history of ephemeral art has taught us the importance of context. Be it a John Cage “happening,” a live Garcia-era Dead show, or the transgressive exhilaration of gobbling down brothy noodles way past bedtime, there’s an enchanted-moment-in-time factor with power to make or break. I am happy to report that Guchi’s Midnight Ramen (the dish, I mean, $15) musters transcendence even when consumed well before the babysitter’s Uber chariot reverts to a pumpkin. An exquisite layering of three broths—pork–chicken bone, dried shiitake, dried seafood—plus salty-sweet tare and umami-rich rayu oil, provides rich context for springy house-made noodles, tender pork-belly chashu, and an egg boiled till its yolk becomes luscious, marigold-hued pudding. Likewise, the braised pork-belly bao ($12) with peanuts and fried shallots, and its squid-ink-tinted sibling ($14) plumped with fried oyster and nori-bolstered alioli, have emerged post-pop-up in tip-top form.

The precision and artistry of the slam dunks made the abundance of duds all the more bewildering. Curry-crab croquetas ($12) fell short of ethereal, sandbagged by a chunky texture that smacked of sloppily prepped potato-based batter. The garlic-citrus sauce drowning raw kampachi ($15) called to mind gritty Key-lime margarita mix. A trio of mazemen-style (brothless) ramens suffered from overcooked noodles, and one featuring sea urchin ($21) had a weirdly sweet, Pledge-y quality. And chawanmushi ($6), the steamed-egg dish usually suspended halfway between liquid and solid in a hot broth, arrived bone-dry. (Or maybe they left out the broth here, too?)

Chang said she returned from her Spanish sojourn dreaming of jamón ibérico de bellota: the vertiginously expensive cured ham made from pigs that feast on fatty acorns, which makes the translucent fat uncommonly nutty and rich. Pagu serves only the good stuff, charging $29 for about 1.75 ounces—which, though pricey, means Chang is barely breaking even. A minor quibble: The slices could be thinner. A less minor one: When I tried it as a pintxo ($12), on crisped bread with tomato and olive oil, it came straight from the fridge, cold enough to render the fat layers tasteless and congealed. Might as well have been sourced from Stop & Shop.

In the press and on Pagu’s website, Chang has professed a dedication to “food, community, and collaboration”—which, to be honest, I found a bit hokey…until I listened to her explain it firsthand. But I wonder: Does that spirit extend into the practical hierarchy of the kitchen? I’ve seen too many restaurant lines where kumbaya camaraderie defaults mostly to jocular fist-bumping of the “Right on, chef!” variety, at the expense of collective self-critique.

I have no way of knowing, of course. But it would be a shame if the only thing keeping this four-star-in-the-rough down was a reticence to harsh the communal buzz with tedious tire-kicking. The hard part, after all—the intangibles, the thoughtful vision, the myth-worthy ramen—Pagu already has in the bag.