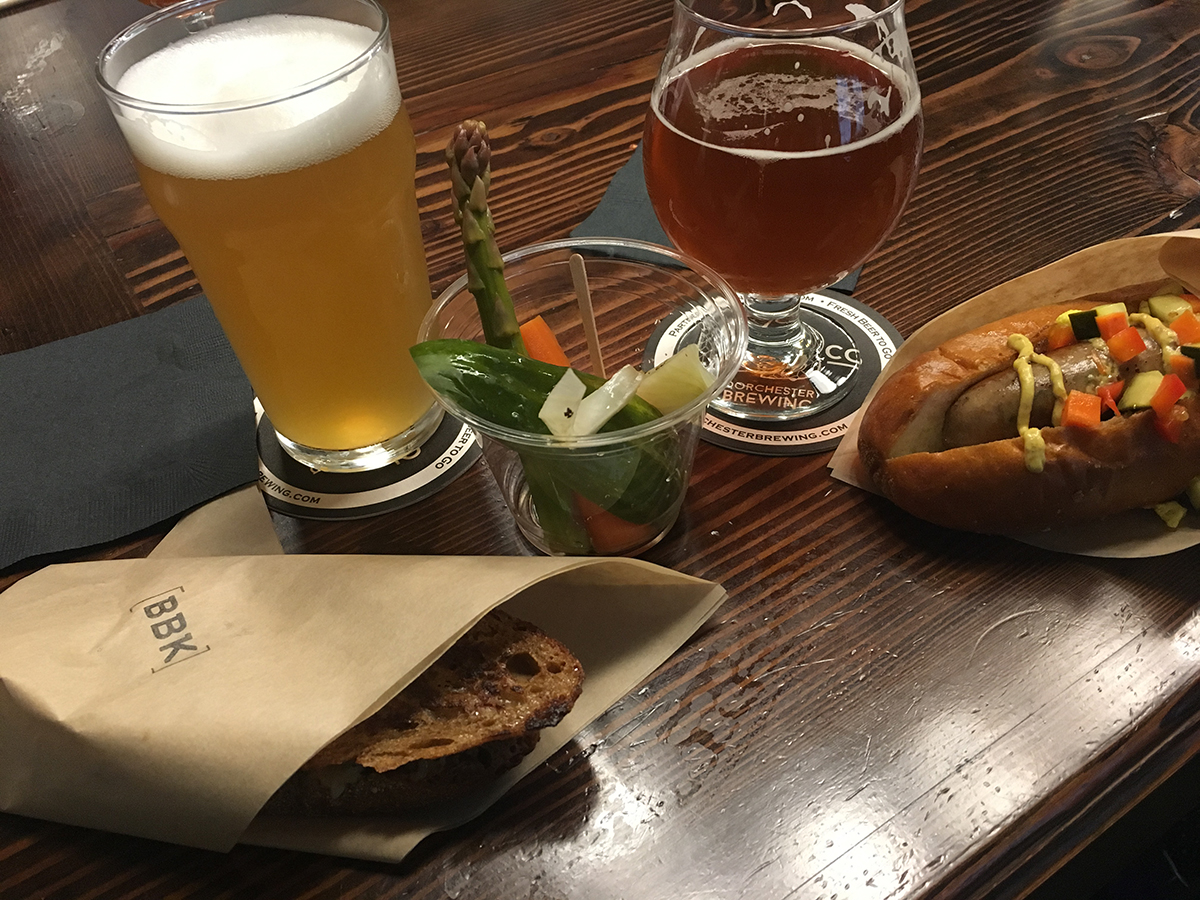 A quintessential attribute of the craft beer industry is that it’s about as convivial as a competitive scene can be. Brewers are known to be helpful and supportive of their fellow beer-makers, even when they have to share self space and consumer attention with a growing landscape of beverage choices.

That friendly nature is frequently on display locally with cosponsored beer festivals, brewing collaborations, and block parties, but one startup is really showing the scene’s true colors. Brato Brewhouse + Kitchen, a project in the works from two current Cambridge Brewing Company employees, continues a preview tour with pop-ups at Idle Hands brewery, Short Path Distillery, and more this summer.

Chef Jonathan Gilman and brewer Alex Corona have been forthcoming about their plans for Brato. So far, they’ve introduced the fermentation-driven concept at Dorchester and Lamplighter breweries, before they’ve even nailed down their own location. Popping up at friends’ spots is a way for Brato to build its brand, Gilman says.

That was clearly evident at Dorchester Brewing Co. in May, when Brato provided a couple different grilled cheeses, sausage sandwiches, and a pickle bar, along with a new beer brewed on Dorchester’s equipment, for a crowd featuring, among others, Corona’s supervisor, longtime CBC brewmaster Will Meyers.

“We’ve been really blown away by the support that the beer community has. I think it’s a testament that people within the industry recognize those that have experience, and what will make the industry stronger in the future,” Gilman says.

Brato is hardly the first startup to get a boost from Cambridge Brewing Company, which is a veritable incubator of the local beer scene.

“You cannot underplay the role [CBC owner] Phil Bannatyne has played in shaping the beer industry in Boston,” Gilman says, adding that his own supervisor, CBC executive chef David Drew, has also played a huge part in his professional development. And the list of breweries now run by people who’ve worked under Meyers during the brewmaster’s 20-plus years at CBC includes Honest Weight, Sam Adams, and the highly rated Ardent Craft Ales in Richmond, Virginia.

“Phil’s been supporting the growth of the industry in Mass. in a positive direction for a long time now, so this is just another step for him. But it feels big for us,” Gilman says.

In addition to building the brand, the pop-ups have helped potential investors notice Brato, Gilman says. While he doesn’t have a location he can share just yet, he says he and Cornoa have a couple properties in mind and are assembling a legal team to help them negotiate. East Boston is currently a frontrunner, he adds.

“The Maverick and Jeffries Point areas, for example, are hotspots coming up, and we’d like to grab a foothold in a new, upcoming neighborhood,” Gilman says.

But this week, catch Brato at Idle Hands Craft Ales in Malden. Corona teamed up with Idle Hands head brewer Brett Bauer on Blüten, an orange blossom honey saison, which will be on draft at the Malden brewery this Wednesday, July 12. On August 11, Brato will be at Short Path Distillery. Follow the fledgling brand on Facebook for additional updates as Brato Brewhouse + Kitchen gets ready to open for real.