Plus, the Parish Café unveils vintage, chef-created specials for its 25th anniversary. 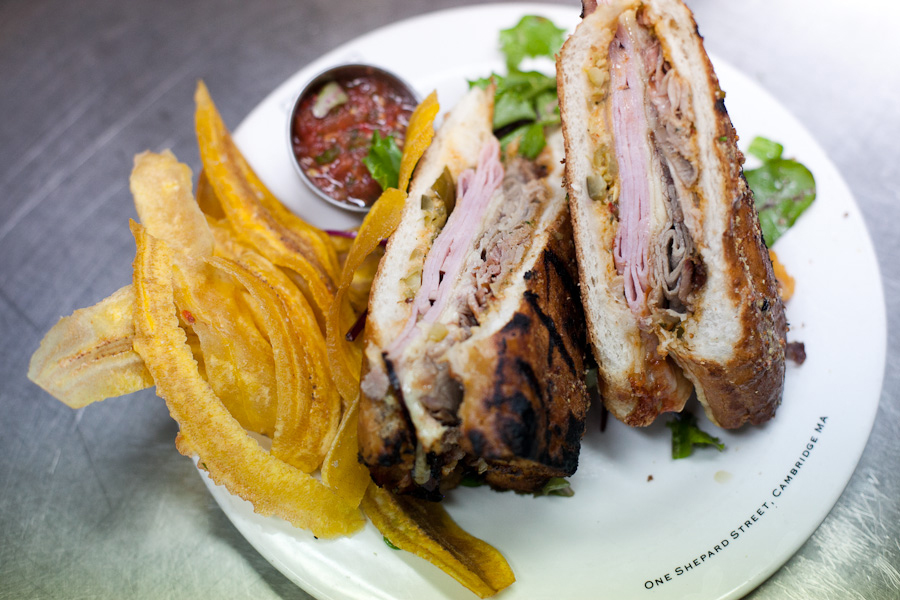 When Dave Cagle held court at the late, great, B-Side Lounge, he indulged in a porky Cuban sandwich from Chez Henri pretty much every night. The Shepard Street restaurant, which shuttered in 2013, was a go-to date spot for Cagle and his then-girlfriend, now-wife, he says, and he befriended a couple cooks (and B-Side regulars), who would package up a late-night Cuban and bring it to Cagle’s bar—in exchange for a shift drink.

“It was like Cuban sandwich caveman bartering,” Cagle, now the proprietor of the Automatic, recalls with a laugh. “I got so used to having it. It’s my favorite sandwich of all time.”

So, now that Chez Henri is closed, and Cagle owns his own late-night, Cambridge go-to, he’s decided to do something about what he calls the Cuban Sandwich Crisis. Since he first started planning the Automatic with partner Chris Schlesinger—a legendary Cambridge chef and a longtime friend of Chez Henri owner Paul O’Connell—Cagle has wanted to serve the Chez Henri Cuban, he says.

“I’ve been [saying] that it would be the best late-night food ever,” he says. “I don’t know if it was a bet or whatever, but Chris somehow talked Paul into it. He’ll even let us keep the name.”

The Chez Henri Cuban debuts at the Automatic on Monday, July 31. It will be a permanent late-night offering, and potentially a regular dinner menu fixture, too, Cagle says. O’Connell trained the Automatic chef Martin Su and his team on the recipe and technique for the roasted pork butt. It doesn’t just involve a 24-hour brine in citrus and spices, but also a lengthy cooling process so it can be sliced just so.

And then come the rest of the sandwich necessities: the Arkansas country ham—“It’s like redneck jamón ibérico,” Cagle says—the pickle mix, the Gruyère, and the “everyman’s” roll that holds it all together.

“The outside [of the sandwich] is brushed with a 50/50 mixture of mayo and butter, then we put it in the oven open-faced. Then we close it, brush it again, then throw it on the flat-top. Then it’s charbroiled,” Cagle says.

In other nostalgic sandwich news, the Parish Café is celebrating a quarter century with new, guest-chef sandwiches by Tiffani Faison (Sweet Cheeks, Tiger Mama), Michael Scelfo (Alden & Harlow, Waypoint), Jason Bond (Bondir), and Cassie Piuma (Sarma), as well as by reviving some classics from its archives.

Restaurateur Gordon Wilcox (the Tip Tap Room, Bukowski’s Tavern, Lower Depths) debuted the sandwich shop and bar in 1992 with a menu of creative sandwiches by Boston’s best chefs. For the anniversary celebration, “The Lydia” resurfaced last week—Scampo chef Lydia Shire’s sandwich has New England lobster salad with lemon, parsley, celery leaves, and balsamic mayo on peppercorn brioche, and comes with a side of greens, cucumbers, and tomatoes. Throughout the year, the Parish Café will bring back old favorites every two weeks, including “The Schlesinger” and Ken Oringer’s “The Benny.”

Go down memory lane with a look at the original, 1992 menu below.

“It’s been amazing to work with so many extraordinarily talented chefs from every corner of the city and its surrounding areas these past 25 years,” Wilcox says. “It’s going to be a lot of fun going through the archives, essentially taking guests in a time machine through different periods of the Boston culinary scene since the early 90’s.” 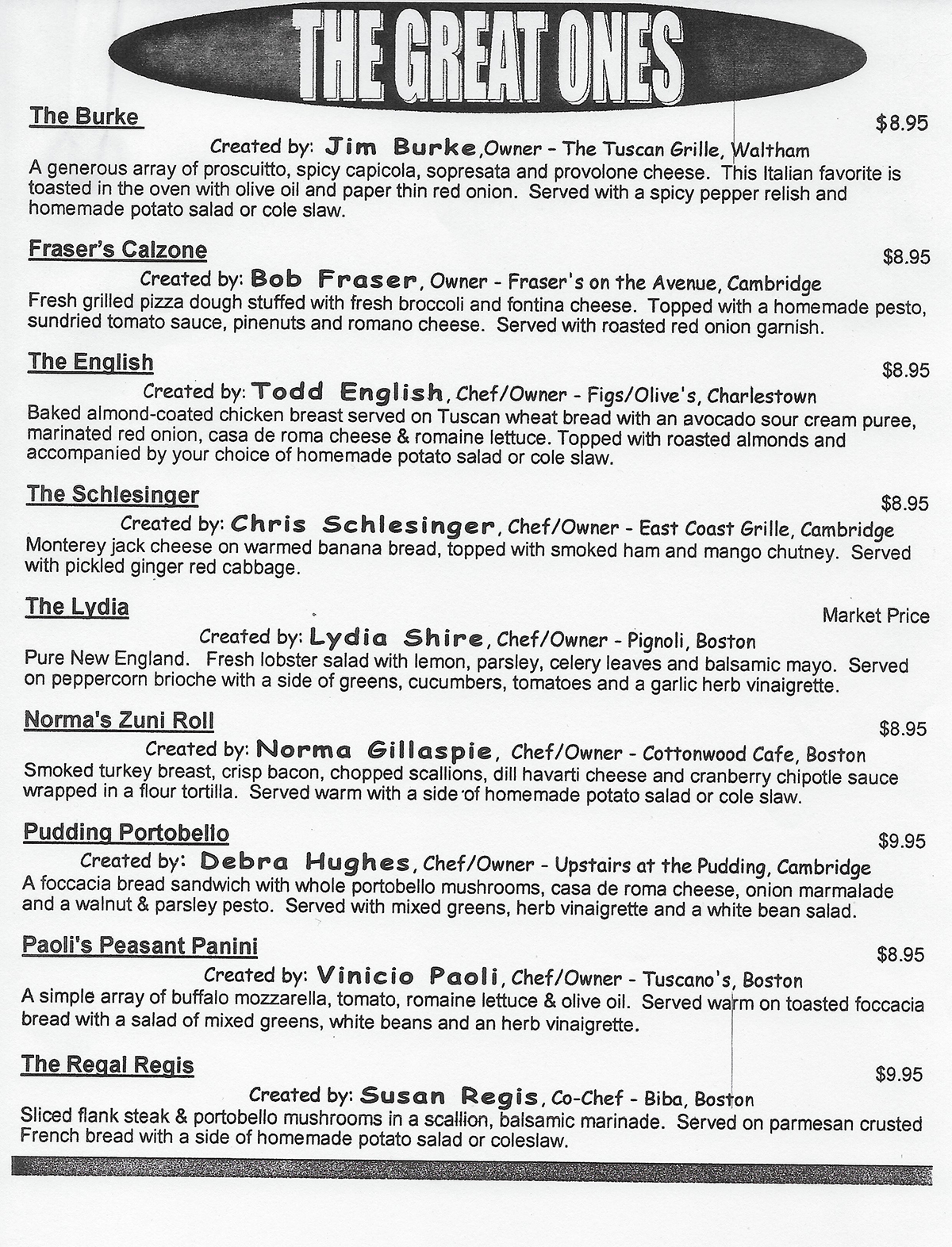 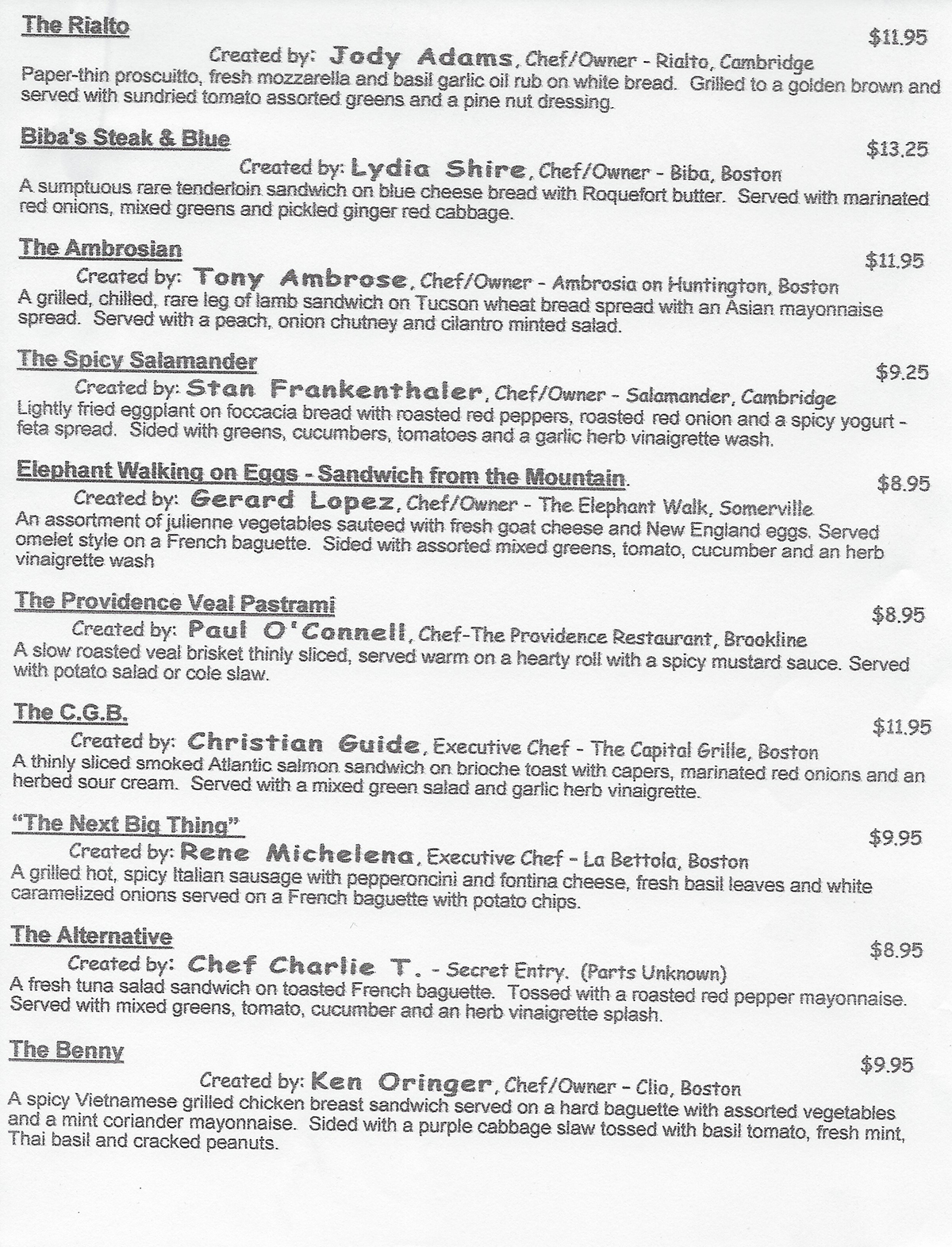