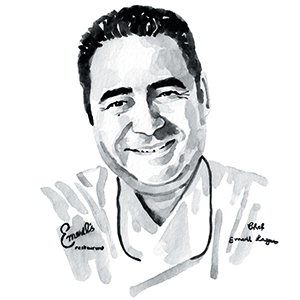 Long before he became an expert on New Orleans cuisine, chef Emeril Lagasse learned how to whip up southeastern Massachusetts staples such as the Portuguese-style clam boil in his parents’ Fall River kitchen. Follow his tips:

Add 6 quarts water, vinegar, the halved lemons (squeeze the juice into the pot before adding), garlic, onion, ¼ cup of the Old Bay, and the salt to a large boiling pot (30-quart recommended). Bring to a boil over high heat, reduce to a brisk simmer and cook for 30 minutes to allow the flavors to blend.

Layer the ingredients in a 30-quart steamer basket in the following order: potatoes, sausage, corn, lobster, then the clams. It is okay for some of the clams to fall through and fill the gaps of the other ingredients. Sprinkle with the remaining ¼ cup Old Bay. Lower the basket into the pot. Cover with the lid.

Steam for 20 to 25 minutes until the lobster is done and the clams are opened.

While the clams are steaming: In a small saucepan, melt the butter. Add the tarragon, remove from the heat and allow it to steep for 10 minutes.

Cover a large table with plenty of newspaper. Carefully remove the strainer insert from the pot and invert onto the newspaper. Discard any clams that may not have opened. Serve with the lemon quarters, tarragon butter, and bread.