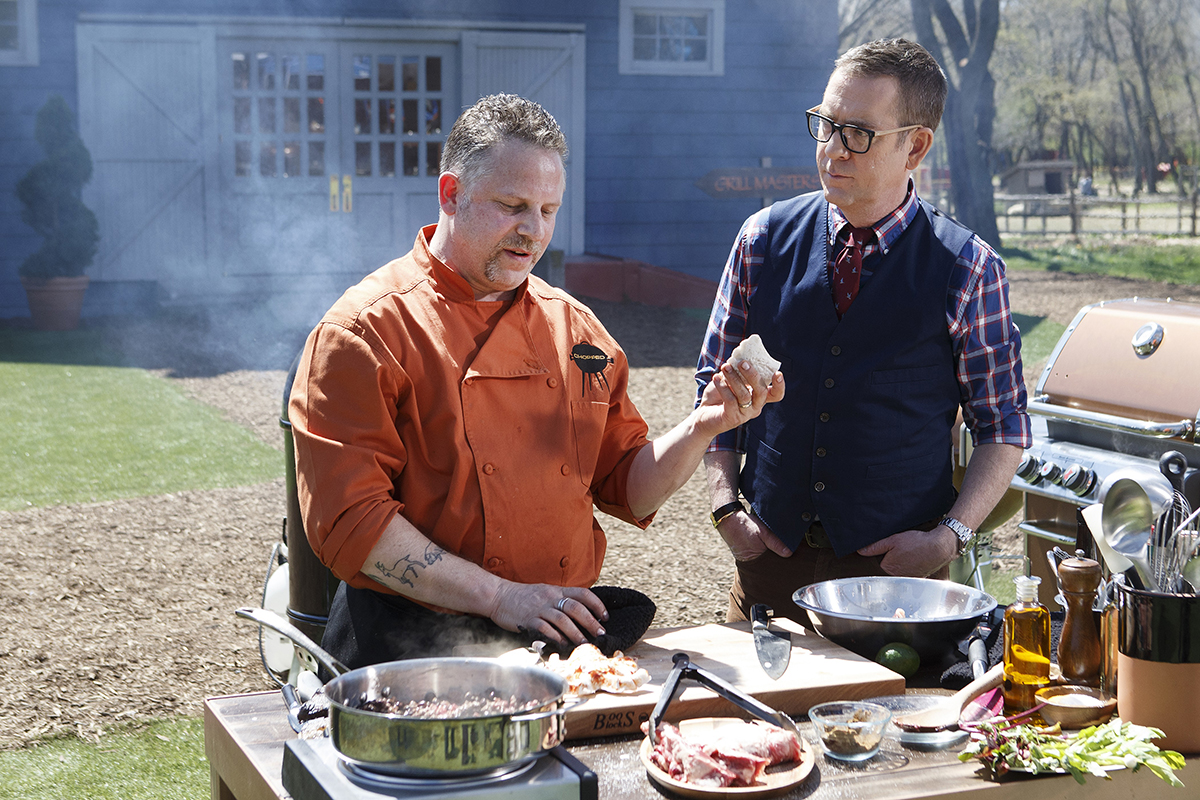 Host Ted Allen checks in on chef Andy Husbands as he cooks with beef rib, Bloody Mary ice pops, vegan lobster and petite vegetable crudite during the entree round, as seen on Chopped, Grill Masters Special. / Courtesy of Food Network

Andy Husbands released his fourth cookbook this spring, trained and did the 300-mile Chefs Cycle for No Kid Hungry, and presided over two restaurants—but he actually spent a lot of his time simulating a Chopped-style cooking show in his backyard. The chef was practicing for the April day when he filmed the show in New York.

Another recognizable Bostonian is on the other side of the competition. Tiffani Faison joins regular Chopped judge Marc Murphy and frequent guest Scott Conant on the judges’ panel on Tuesday, August 8. Her smokehouse, Sweet Cheeks, plans to air that episode.

Chopped Grill Masters operates like a tournament version of the high-rated show. Ted Allen is the host. During the first four episodes, four different competitors are presented with a basket of mystery ingredients for each round—appetizer, entree, and dessert—and timed to execute a unique dish. The tournament finale, airing Tuesday, August 29, pits the four winners against each other for a chance to win $50,000 “and a Napa Valley dream vacation.”

The stakes are raised by putting the Chopped chef-testants in an outdoor kitchen, and giving them only charcoal and propane grills, and a smoker to get it done. So, to prepare, Husbands borrowed a gas grill to accompany his own backyard amenities. Remember how rainy the spring was? He set up his outdoor cooking station underneath a pop-up tent. His wife, Rice Wales, curated the mystery baskets and kept the time, and friends, like Husbands’ competitive barbecue partner Chris Hart, and chef Tony Maws, came by to consult.

“We did test runs for at least a month and a half,” Husbands says. And in the end, “I found the real [Chopped] kitchen easier than my home kitchen. I was not set up for success,” he says, laughing.

But it was helpful, he says.

“I was not successful every time. The first round is 20 minutes, which is no problem if you know what you’re doing. But I had to run to our pantry area, then the plates were somewhere else. The first couple times were upsetting, and I thought, I’m not going to be able to do it,” he says.

But Maws, who competed last summer in the Chopped Grill Masters finale, was a great support. “The best advice Tony gave me is think about what you’re doing, but really, you need to get it going. Hypothetically, let’s say they give you some brisket. I need to know what I’m doing with this before I get all my ingredients. There’s always something when you’re like, ‘How the hell is that guy going to cook that in 20 minutes?'”

And getting out-of-the-box ingredients was helpful, too. For the dessert challenge, Wales gave him zucchini. Husbands tried to candy it with mixed success, he says. After the challenge, RealFood Consulting president Ed Doyle suggested he treat it like maple-brushed bacon.

“I tried it again, and it really crisped up and it was pretty cool,” Husbands says.

Husbands can’t share what any of the mystery ingredients will be on TV, but he does say he hopes it’s not eel. Wales gave him that for his very last at-home challenge.

“Google how to fillet an eel,” the chef says. “It’s gross and it’s hard. I’m pretty proficient in filleting fish, very proficient in any kind of meat. But [eel] was not fun.”

Chopped Grill Masters isn’t any of these chefs’ first TV experience. Husbands was on season six of Gordon Ramsay’s Hell’s Kitchen, while Coe calls himself “a natural competitor,” and has appeared on Food Network and A&E.

Faison was a finalist on the first season of Top Chef, and has been in other Bravo productions since.

“I was so thrilled the producers of Chopped asked me to be a judge on this season of Grill Masters,” she says. “I had an absolute blast judging with Marc and Scott and I have to admit, it felt rad to be on the other side of the table for a change.”

Catch Chopped Grill Masters: Battle 1 at 10 p.m. on Tuesday, August 1, on the Smoke Shop’s nine TVs. Reservations are encouraged. Stay tuned to Sweet Cheeks’ and the Industry‘s social media for more details on their viewing parties.

This post was updated Thursday, July 27, to include Massachusetts chef Stephen Coe. 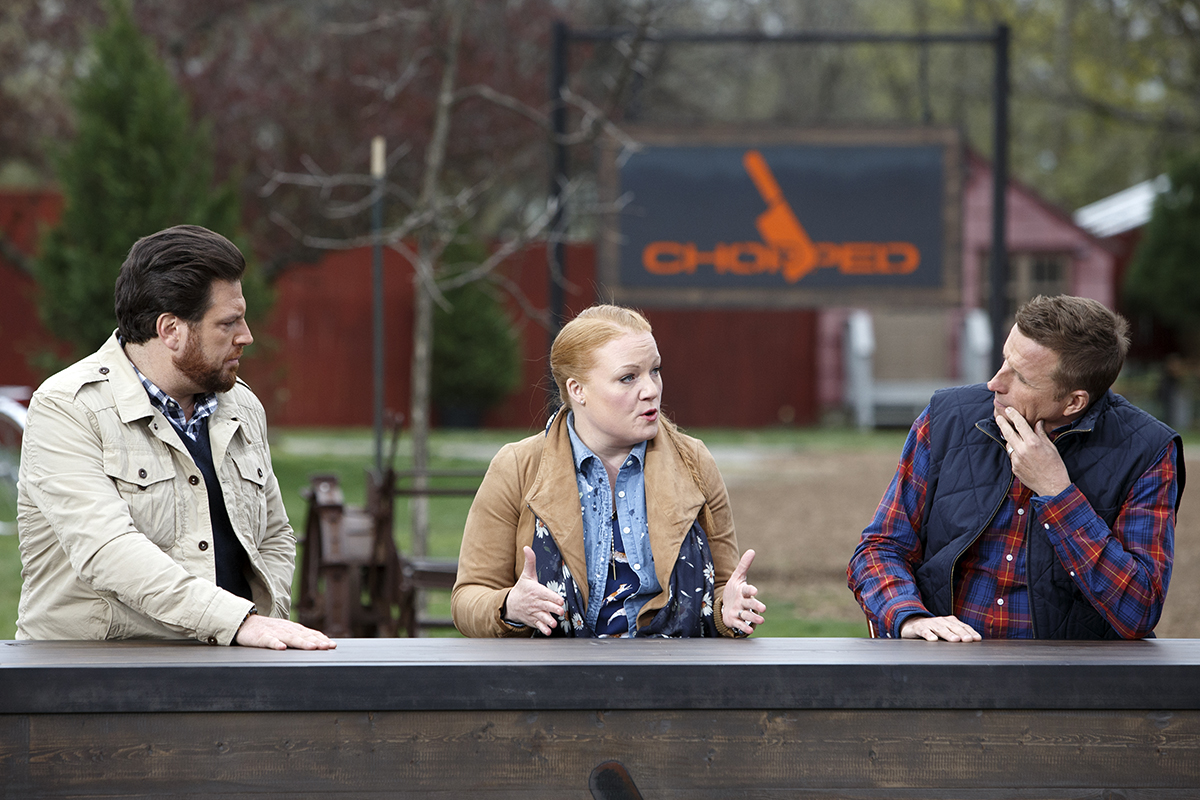