In Her New Cookbook, Erin Gardner Shares a Whimsical Approach to Baking

Up your cake-baking game with tips from a pro.

It’s Fall Cookbooks Week here on The Feed! Check back daily for new recipes and the stories behind the season’s top new releases. 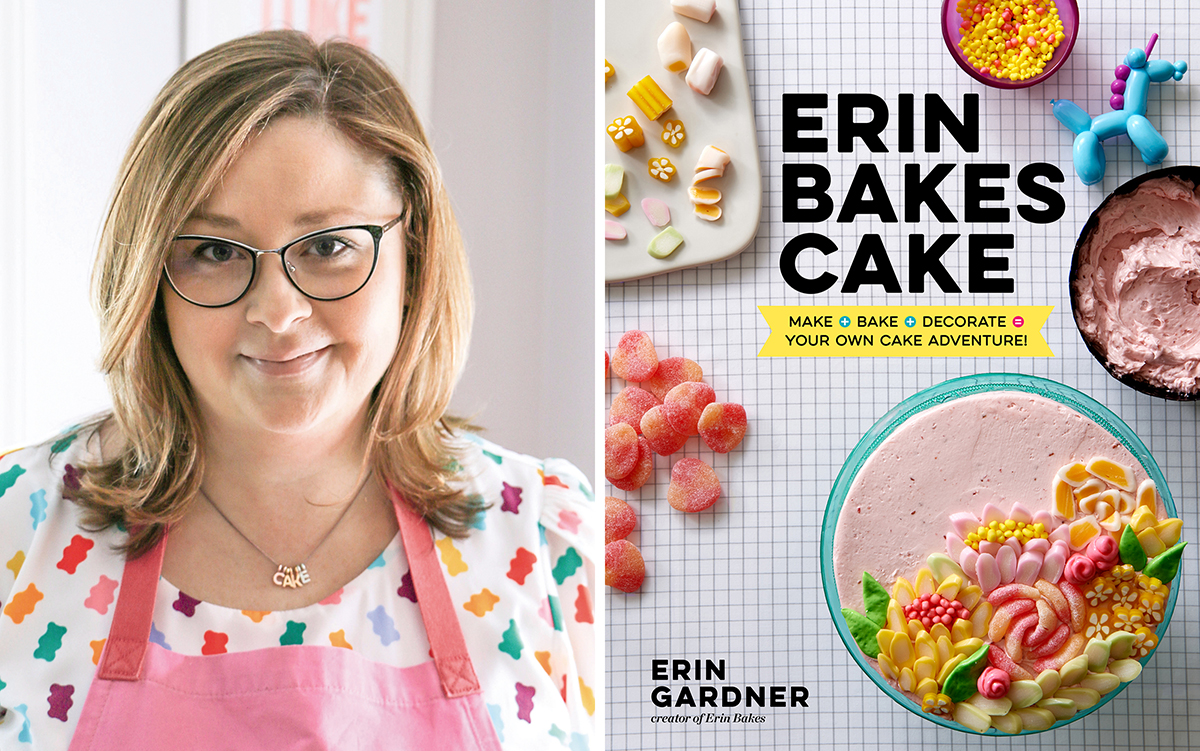 Now she wants to teach you how to bake a better birthday cake.

In her new cookbook, Erin Bakes Cake (Rodale), Gardner takes a whimsical, “choose-your-own-adventure-style” approach to crafting cakes. Taking a cue from the setup at commercial bakeries, her batter, frosting, and accouterment recipes can be mixed and matched to create some 500 variations.

“I wanted to give people the building blocks of how to make cakes, and the freedom to build whatever their heart desires,” says Gardner, who now lives in Barrington, New Hampshire. She ran a bakery, Wild Orchid Baking Co., in Dover, New Hampshire, for several years before shuttering it recently to focus on writing and raising her two small children.

Recipes in the book range from super simple to complex, and are all fondant-free–“it’s the Spanx mini dress of the baking world,” she writes. But the guide does include advice for decorating store-bought cakes and doctoring up mixes. Those with more advanced skills can tackle her more elaborate projects, including a Potted Orchid Cake and a Unicorn Carousel Cake (unicorns are a recurring theme throughout the book).

She strives to use only edible decorative elements, including cookies, chocolate and candy. “I felt a strong pull back to my pastry roots to develop decorating techniques that added to the flavor profile, not just the beauty,” she says.

Her number one tip is a simple one: Relax. “We all have cake fails,” she says. “Being a professional is just knowing when to bail.”

Try beginning with a basic project such as her Chocolate Birthday Cake with American Buttercream (see recipes below), then working your way up to fancier stuff. “If you’re going to take the time to bake, then it should be fun,” she says. “You shouldn’t feel like you’re being tortured–or torturing your cake.” 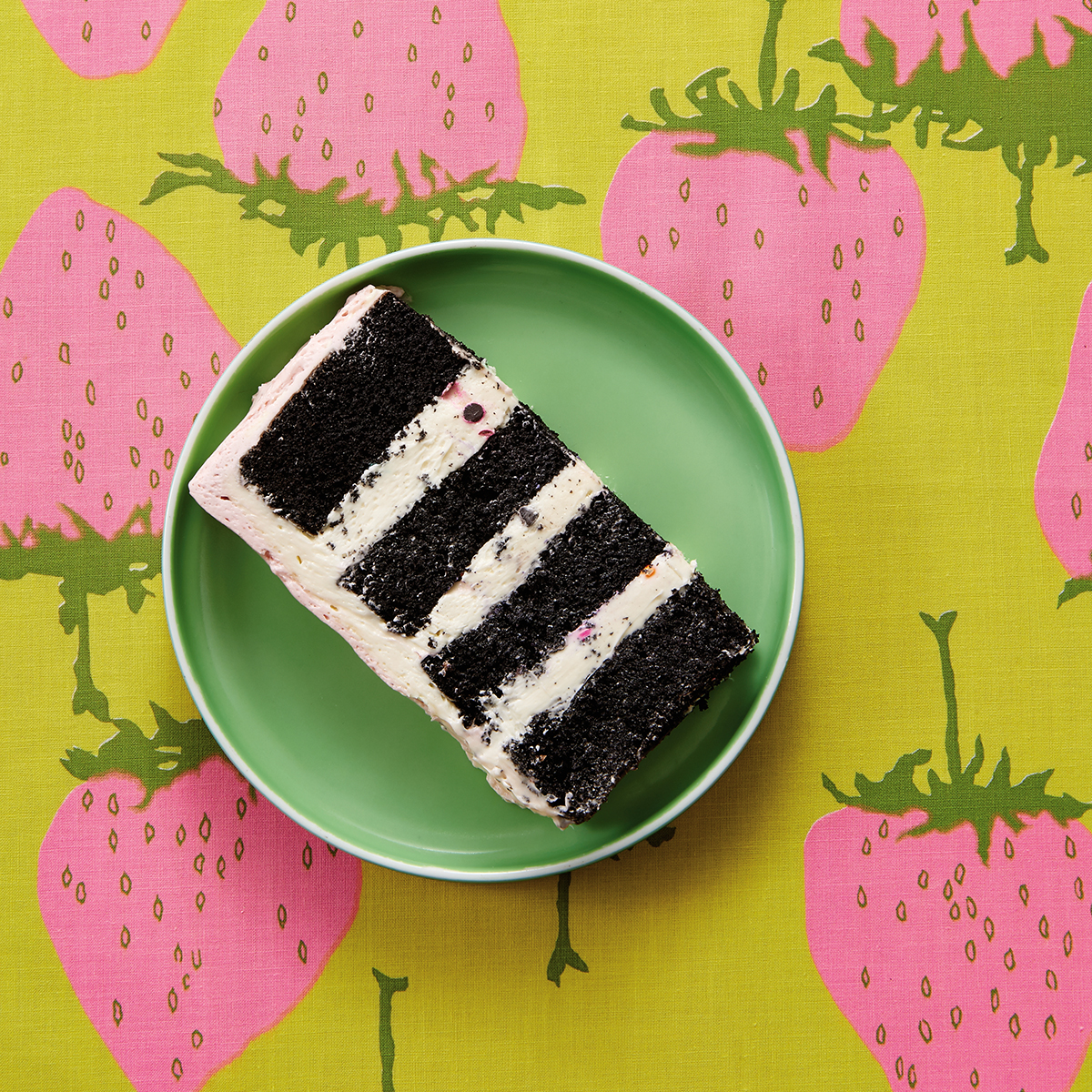 Position a rack in the center of the oven and preheat to 350°F. Spray and flour pans in your chosen size.

In the bowl of a stand mixer fitted with the paddle attachment  (or in a large bowl using an electric hand mixer), beat together the butter, brown sugar, granulated sugar, baking soda, and salt at medium speed until fluffy and lighter in color, stopping to scrape down the sides of the bowl with a rubber spatula to make sure there are no butter lumps, about 5 minutes.

Add the eggs, one at a time, until completely combined. Stop and scrape down the sides of the bowl halfway through mixing and after adding the last egg.

Divide the batter evenly between the prepared pans and bake, rotating the pans’ positions halfway through baking, until a toothpick inserted in the center of a cake comes out clean or with a few crumbs clinging to it, 45 to 50 minutes for 8-inch round pans or 30 to 35 minutes for 6-inch round pans.

In the bowl of a stand mixer fitted with the paddle attachment (or in a large bowl using an electric hand mixer), beat your chosen combination of softened fats on medium speed until light and fluffy. If you’re using a combination of butter and shortening, beat the butter first until smooth, 5 minutes; add the shortening and beat until combined, about 5 minutes more.

With the mixer on low speed, slowly add the confectioners’ sugar until just combined, stopping occasionally to scrape down the sides of the bowl with a rubber spatula, 5 to 7 minutes

Turn off the mixer and add the vanilla extract and salt. Mix on low speed just until combined. Keep the mixer on low speed and slowly add the milk, a tablespoon at a time, until the frosting reaches your desired consistency.

Use the buttercream immediately or store it in the fridge in an airtight container for up to a week. Press plastic wrap directly against the surface of the buttercream before putting the lid on the container to prevent it from forming a crust and absorbing fridge odors.

To bring cold buttercream back to a usable consistency, transfer it to a mixer fitted with the paddle attachment. Beat on medium-high speed until the buttercream is fluffy and spreadable again, 5 to 10 minutes.