What to Eat (and Drink) on Labor Day Weekend

Say so long to summer with a "lobster" roll, or actual New England seafood; fancy s'mores, cider sangria, and more.

Labor Day can affect the opening hours of your favorite establishments.
Make sure to call ahead or check social media for the latest opening information. 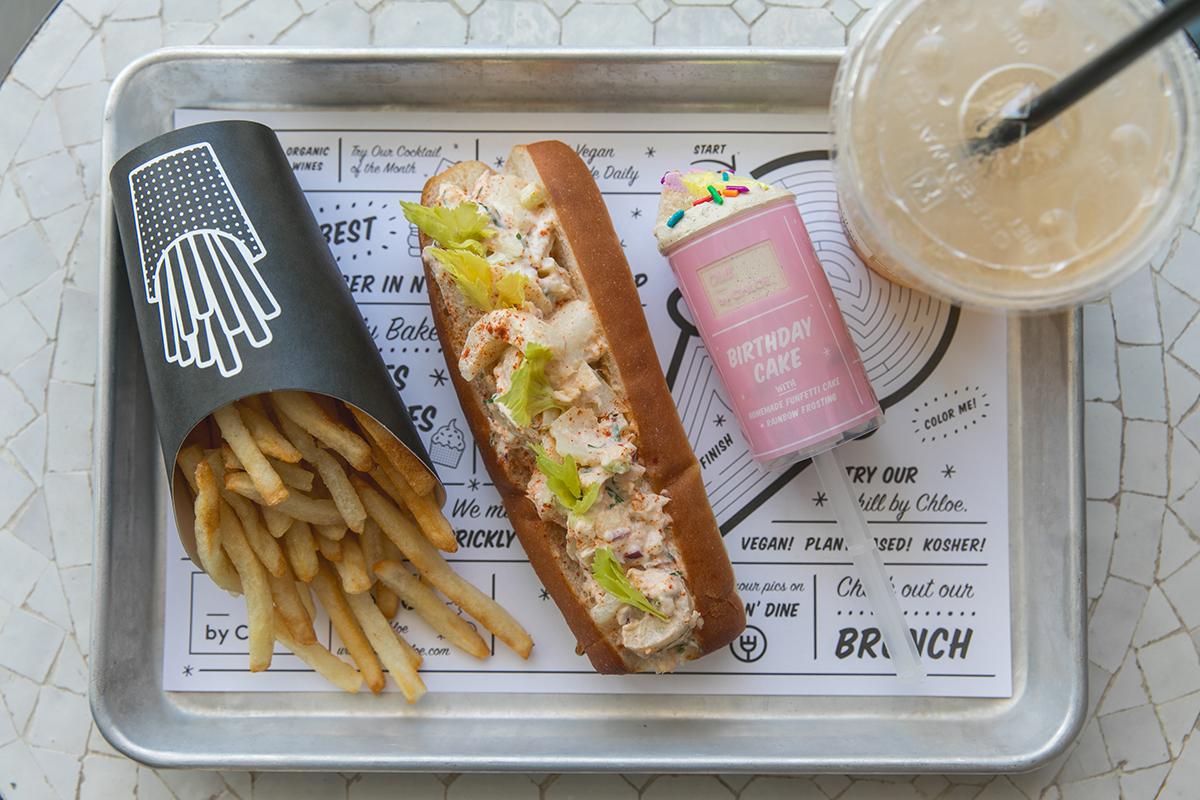 The Tail End of Summer special at By Chloe highlights a vegan lobster roll. / Photo provided by By Chloe

Plant-fueled Instagram filter By Chloe has a vegan sendoff for the summer season at both its Boston locations. The Tail End of Summer deal is on Friday, September though Monday, September 4—Labor Day—and features the locally exclusive off-menu special, a vegan “lobster” roll, made with hearts of palm, celery, smoked paprika, and dill. For $17, it comes with By Chloe’s signature air-baked French fries, a push-pop or cup of dairy-free Chill by Chloe ice cream, and a refreshing lemonade. Also, By Chloe’s new fall menu items roll out today, including apple-walnut-arugula-topped smashed avocado toast, roasted garlic and cauliflower soup with maple wheat croutons, and more. 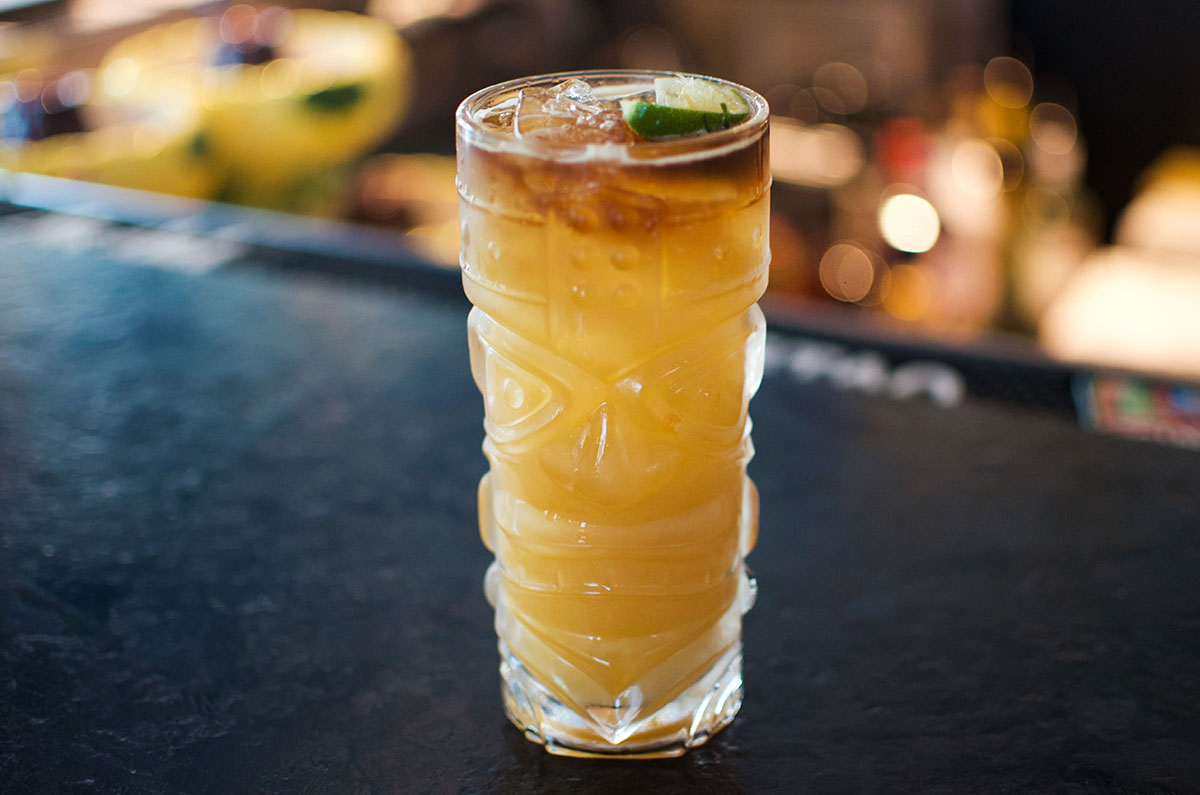 At this new Cambridge restaurant, a Hunan Mai Tai is $5 in September. / Photo provided by Sumiao Hunan Kitchen

Perhaps you’ll stick to low-proof libations to extend the life of your long weekend—or perhaps you’ll say sayonara to summer with several spirit-forward mai tais. If you’re in the latter camp, head to Cambridge’s new (and only) Hunan restaurant, Sumiao Hunan Kitchen, for a Hunanese interpretation of the Trader Vic’s classic. Chairman’s Reserve Spiced Rum brings flavors of clove, cinnamon, citrus, and molasses to this spirit-forward favorite. Sumiao is welcoming students back to Kendall Square—and introducing itself to the area’s after-work crowd—with this $5 special throughout the month of September. 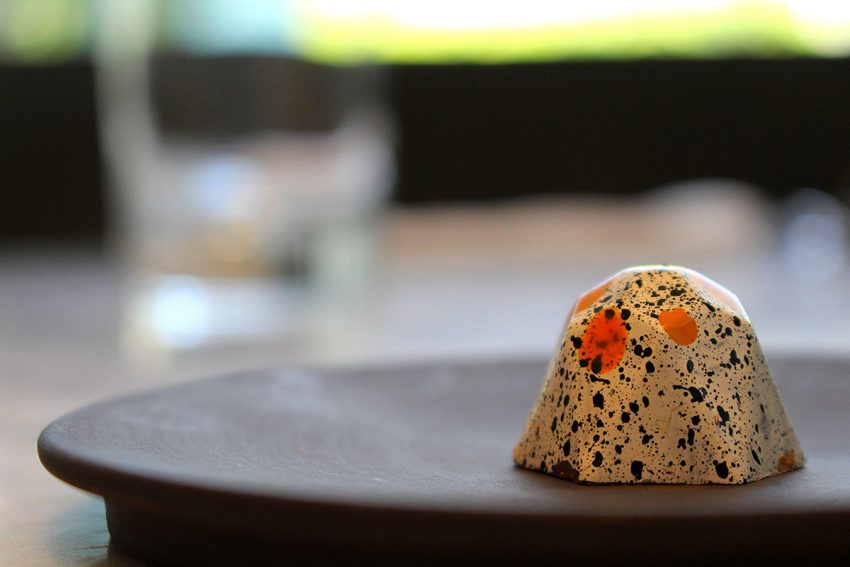 If you’re city-bound this Labor Day instead of in the great outdoors, you can still get a taste of s’mores. The campfire classic is reimagined at Café ArtScience by pastry chef Giselle Miller. “My family loves to camp and enjoy barbecues during the summer,” she says, and chocolatey, marshmallowy s’mores were always part of the festivities. At the Cambridge culture lab, a Valrhona milk chocolate shell is filled with torched marshmallow, cherrywood smoked milk chocolate ganache, and crushed graham crackers. The nostalgic morsels are available through September 30, and they pair well with the house Manhattan variation, Smoke & Mirrors, which is delivered by robot with a cloud of marshmallow flavor. 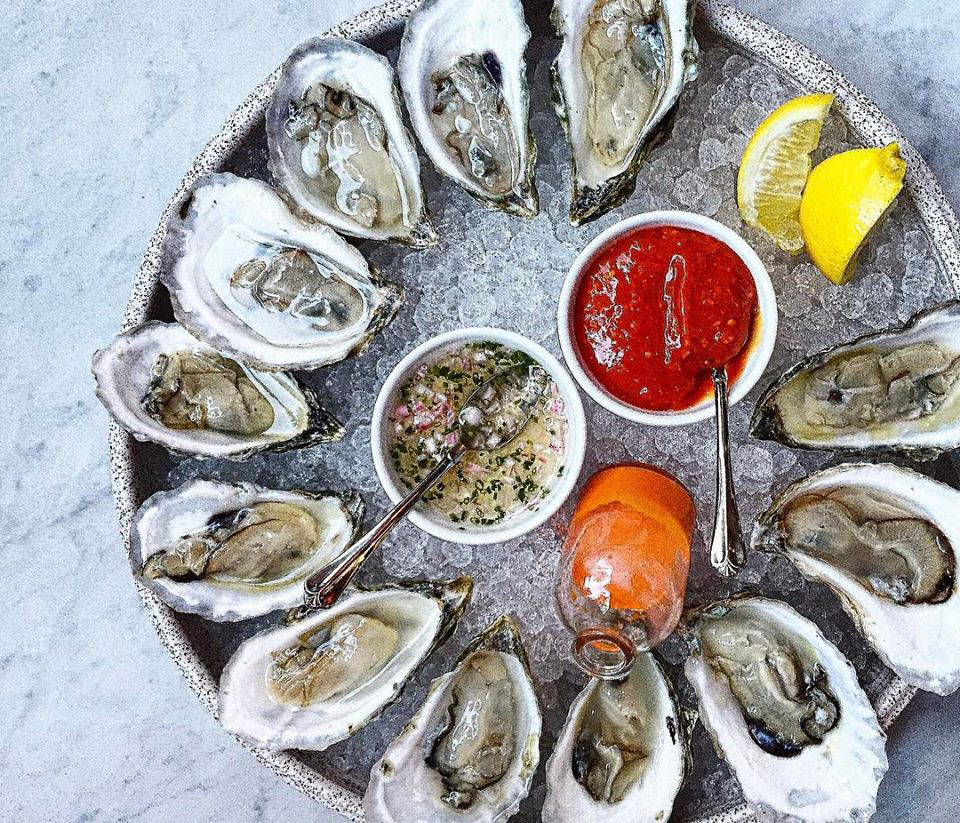 Oysters at Waypoint at $1 every evening from 5-7 p.m. / Photo provided

Shuck yeah! Chef Michael Scelfo just introduced daily dollar oysters at the bar at his year-old Waypoint. If you find yourself out any evening between 5-7 p.m., belly up, and pony up in Harvard Square for a couple dozen bivalves. Maybe you’ll even be early enough to nab one of Scelfo’s new, limited-release burgers. Waypoint will be open regular hours on Labor Day. 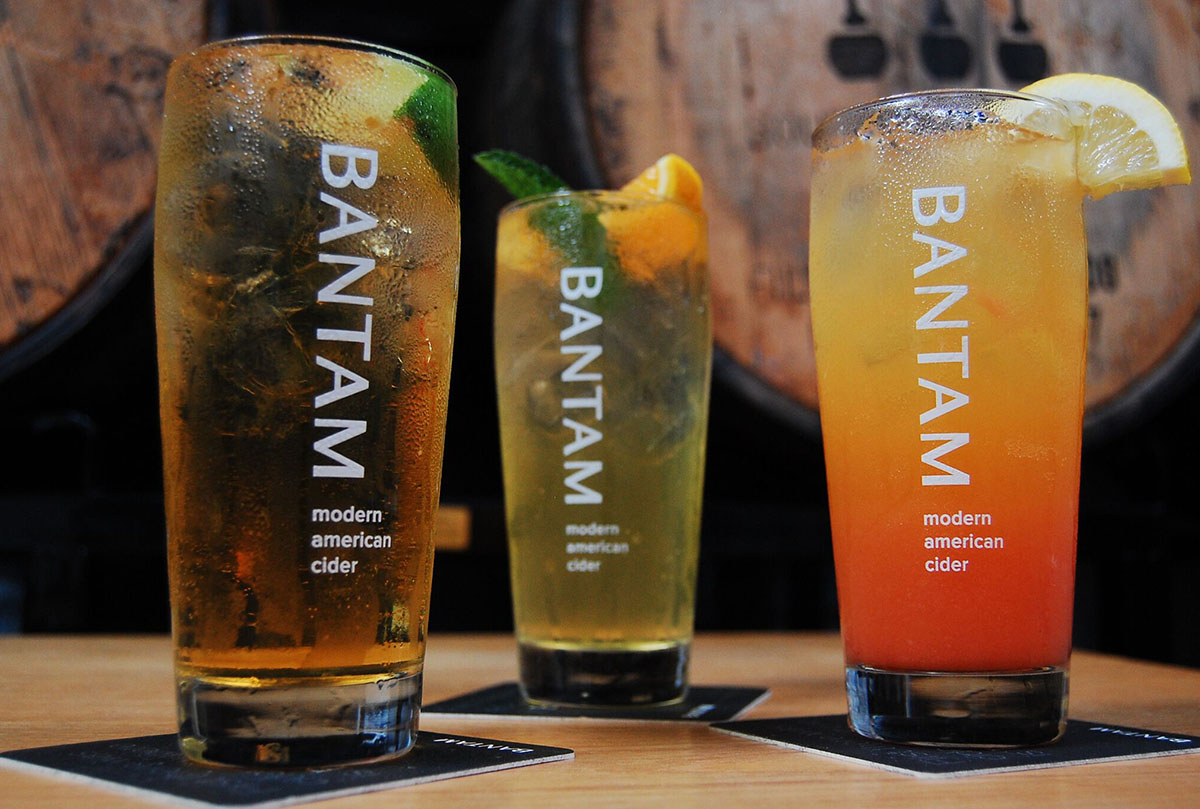 Bantam Cider cocktails will be available at the Somerville Taproom on Labor Day weekend. / Photo provided by Bantam Cider Company

Bantam Cider Company has been aging some eau de vie (a clear fruit brandy) from South Boston’s GrandTen Distilling for several months. The apple-based spirit clocks in under 20 percent alcohol-by-volume, but it brings another boozy level to the house-fermented ciders in a trio of special cocktails available this weekend at the Somerville cider house. Using Wunderkind, there’s a sangria with fresh oranges and mint; while Buzzwig Sangria plays off that cider’s tropical flavors with lemon, lime, and guava. And of course, there’s a Moscow Mule with Bantam Ginger Beer and lime. The cocktails are on the menu Friday, Saturday, and Sunday this weekend—as long as they last. 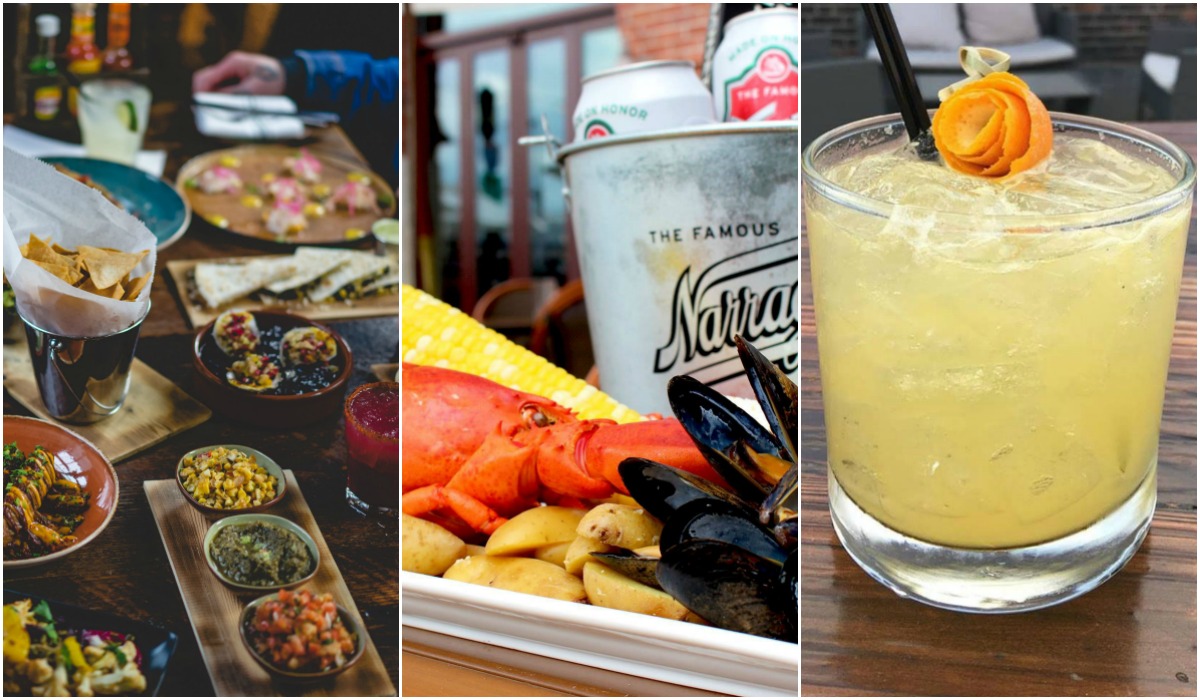 As is a holiday tradition for the Aquitaine Group, all of its Boston properties (Aquitaine, Gaslight, Metropolis) will serve brunch on Monday, Sept. 4. So will the Beehive, MET Back Bay, Cook in Newton, and potentially some other reliable weekday brunch spots.

At Loco Taqueria and Oyster Bar, chef Matt Drummund and bar manager Kaitlyn Fischer are throwing down with a full-on luau during brunch. In addition to regular menu favorites like fried chicken and a jalapeño cornbread waffle, and breakfast tacos with carnitas, scrambled cheesy eggs, smoked tomatillo salsa, and chile de arbol, expect ceviche specials and more tropical delights. The bar has rum punch bowls, the Dirty B, with Myer’s Rum, Rum Chata, muddled bananas, and a chocolate drizzle, and more.

Nothing says summer in New England quite like a seafood spread. At Harvest (44 Brattle St., Cambridge), chef Tyler Kinnett’s New England seafood boil features a seaweed broth with Maine redfish, scallops, mussels, clams, and squid ink gnocchi on top of sautéed greens with fennel and lemongrass. Starting at 5 p.m. every Sunday and Monday, Ward 8 (90 N. Washington St., Boston) debuts a whole lobster boil with grilled chorizo, corn on the cob, cornbread, littlenecks, and potatoes. And chef Jasper White has a clambake on at Summer Shack (50 Dalton St., Boston), with a one-pound lobster, mussels, clams, corn, potatoes, egg, and chourico. And just for Labor Day, the Fort Point beer bar City Tap House presents the Great Clambake of 2017. The $25 special comes with a heaping plate of mussels, lobster, sausage, potatoes, and corn. Narragansett is sponsoring the patio party, so expect a range of its Rhode Island-brewed beers, plus a $25 bucket of lager. There will be live music, a corn hole tournament, and more fun.

If you’re looking for something boozy on Labor Day, note that Short Path Distillery (and its spacious patio) will be open. The resident spirits maker in Everett’s Fermentation District is typically closed on Mondays, but opens on Labor Day for holiday fun. Among other craft cocktails shaken and stirred with house-made rums, gins, and more is this week’s special, the Teenage Mutant Ninja Myrtle. The drink features SPD’s new, small-batch Myrtle Liqueur, along with Gold Rum and citrus. Short Path Distillery will be open from 1-6 p.m. on Monday.