With seasonal small plates and curated beer and wine, it's a permanent home for the pop-up Company Picnic. 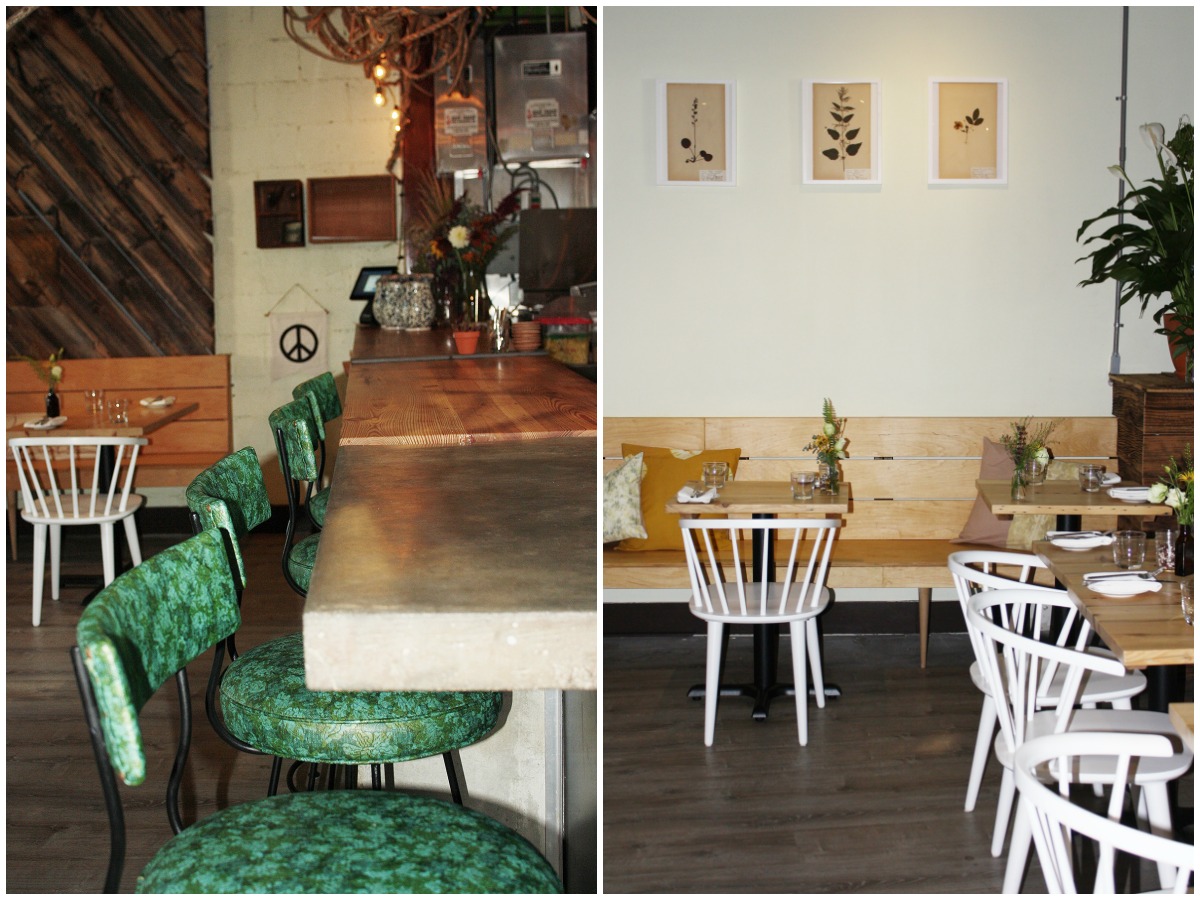 A magical-feeling nook of Union Square comes to life again this week. Field & Vine officially opens for dinner on Wednesday, September 13, in the space that formerly housed Journeyman.

Field & Vine is the first brick-and-mortar venture from Sara Markey and Andrew Brady, the couple behind the pop-up Company Picnic. It’s Brady’s third kitchen on Sanborn Court, the alleyway off Union Square, though. He and Markey met as employees at Bronwyn, and Brady also cooked with Forklift Catering next door. They live in the neighborhood and were friendly with the Journeyman team from hosting pop-ups with them, and the location is a natural fit.

Field & Vine introduced a new menu at sister spot Backbar in July. The restaurant is just about 40 seats, including seven at a counter around the open kitchen and raw bar. Brady’s team removed one of three grills left over from the Heat at Journeyman days, and installed a small flat-top and a fryer. He plans to use the wood-fired grill, though, on his frequently changing menu.

Junior Montillo, who started as a dishwasher at Journeyman and worked his way up, returned to the new restaurant and will lead that station. “It’s great to have him,” Brady says. “He knows the space and he knows the grill.”

The only other hold-over from the Journeyman days is a striking, custom woven-branch and rope sculpture by Foret Design Studio, a Best of Boston Weddings-award winning team with a new storefront on the other side of the square.

“We toyed with idea of taking it out, but it went with our whole idea, our whole vibe,” Markey says. “It’s such a statement, it’s so beautiful, and obviously, it took some time to make.”

Like Journeyman, Field & Vine will not have a cocktail bar. Markey offers a menu of wine, beer, cider, and apertifs. They’re going to listen to guests on whether to add a small list of batched cocktails from the Backbar team, Brady adds.

Field & Vine lightened the room quite a bit with a new coat of soft green paint, new grey floors, and custom-built, pale wood benches and heart pine tables. Throw pillows are hand-made by Cora Meginsky, dyed naturally with onion skin, sumac, avocado pit, calendula, and other materials. At least until the harvest is over, diners will see some of the same foraged ingredients, like the edible flowers atop Brady’s bluefish pâté, on their plates, Markey adds.

The menu at Field & Vine isn’t prix-fixe, like Journeyman’s was. Broken down by “raw bar,” “snacks,” “vegetables,” and “not vegetables,” it’s all meant to be shared among the table.

“We want it to be casual,” Brady says. “The menu will rotate constantly. Things will probably change soon, with all the summer stuff disappearing. It’s okay, delicata squash is coming,” he adds, with a laugh. Check out a sample menu below.

Field & Vine opens for dinner on Wednesday, September 13. For now, it will serve Tuesday-Thursday from 5-10 p.m., and stay open until 10:30 p.m. on Friday and Saturday. 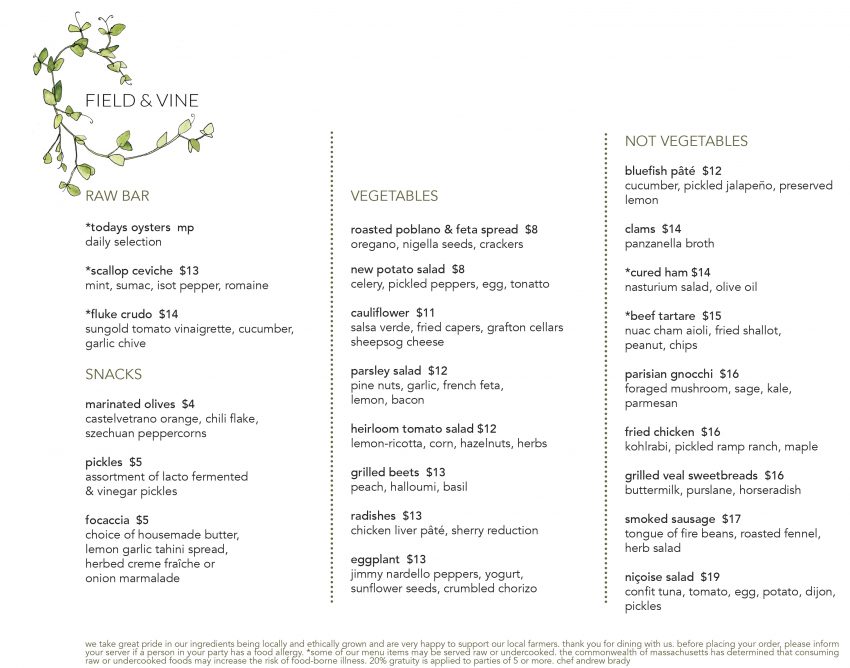 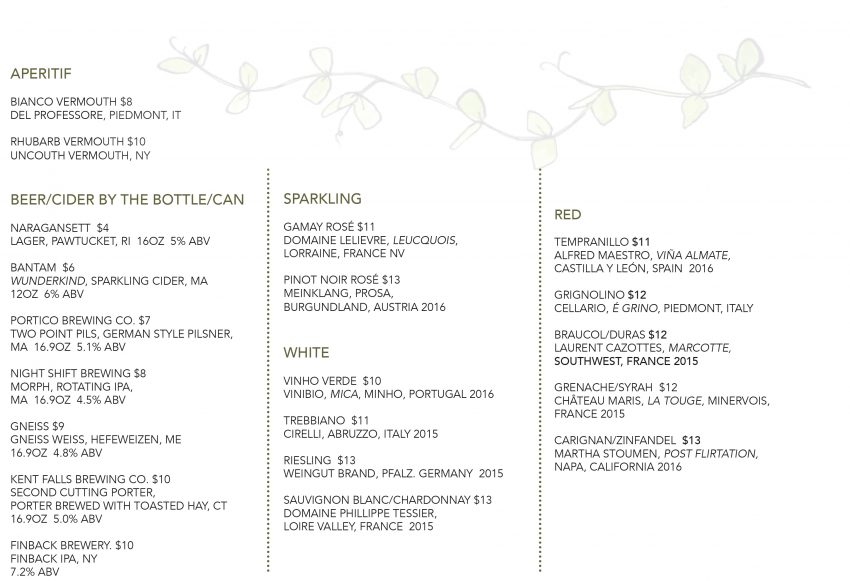 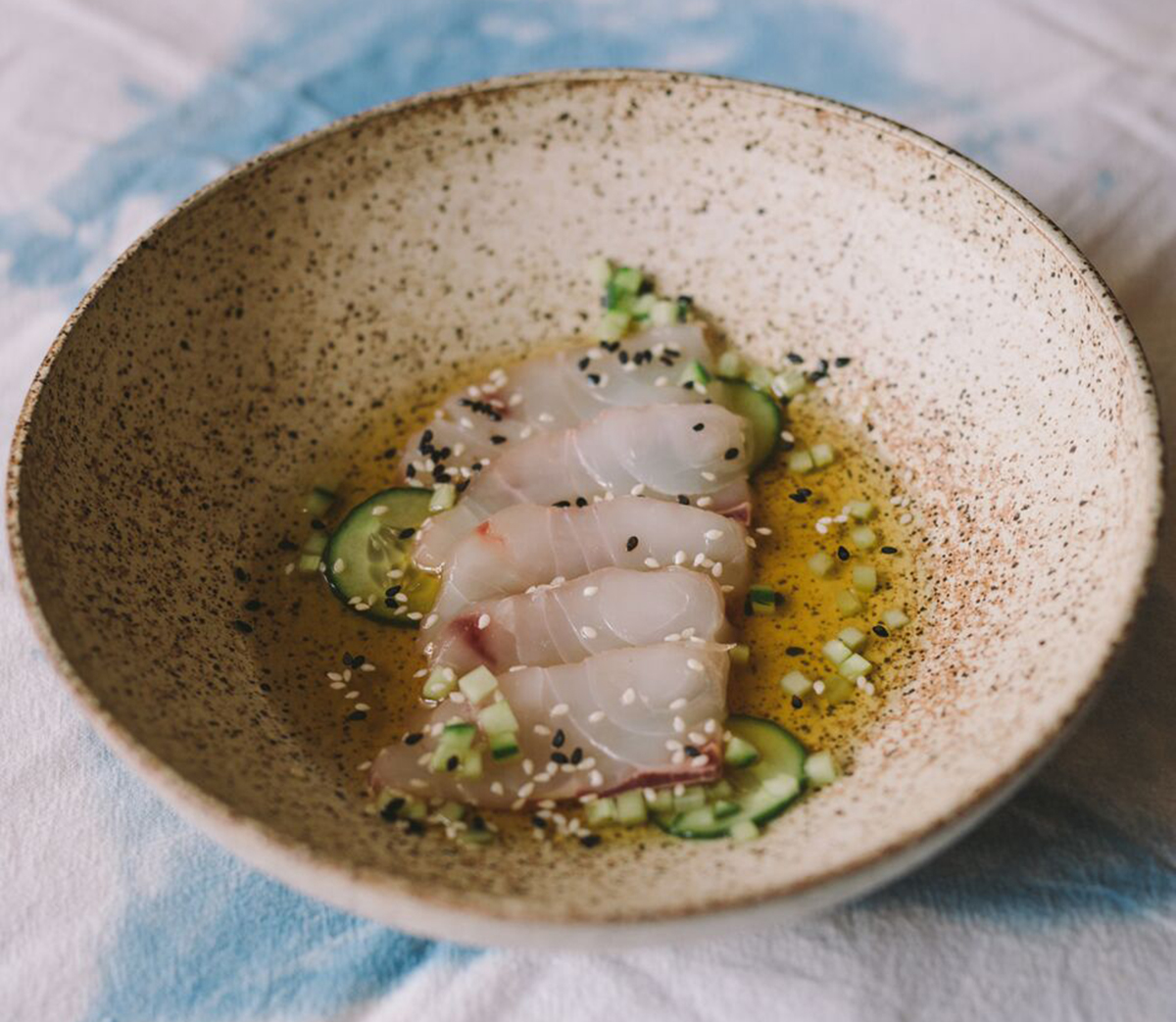 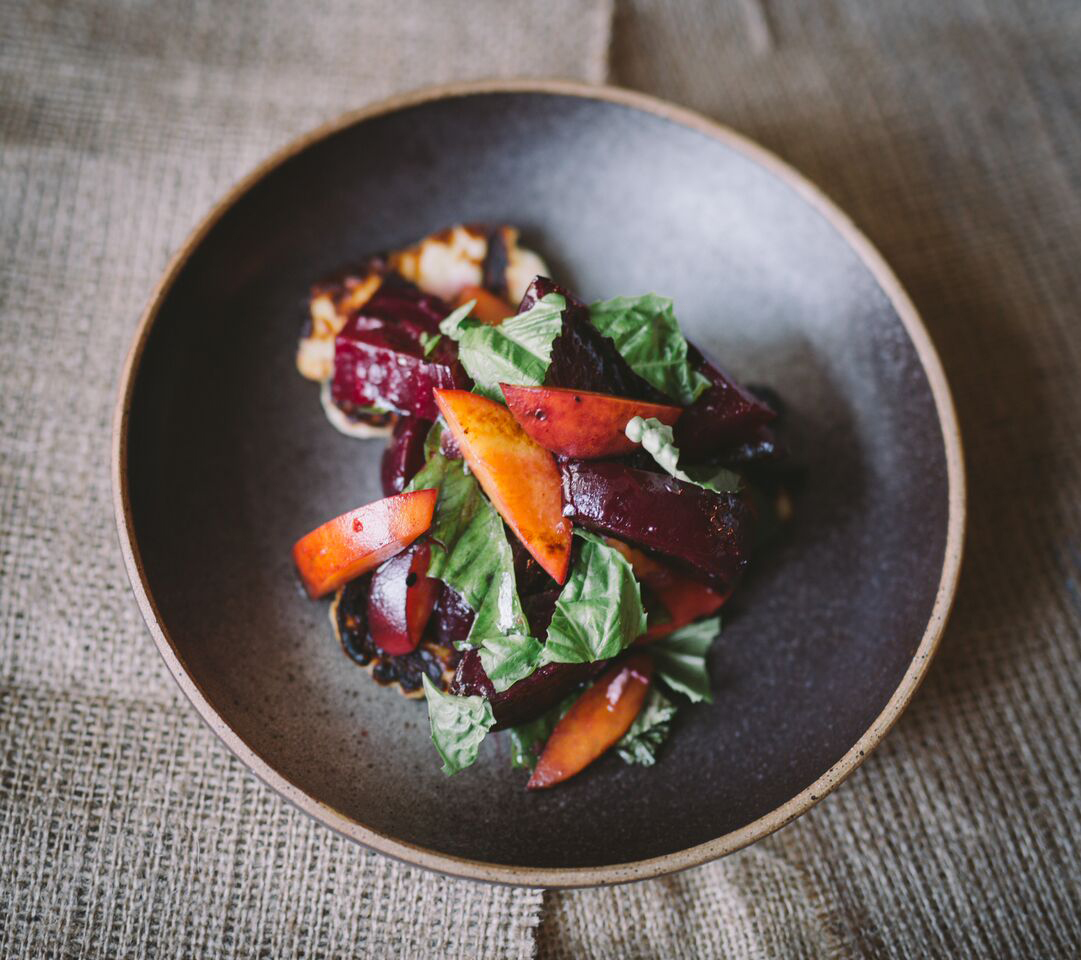 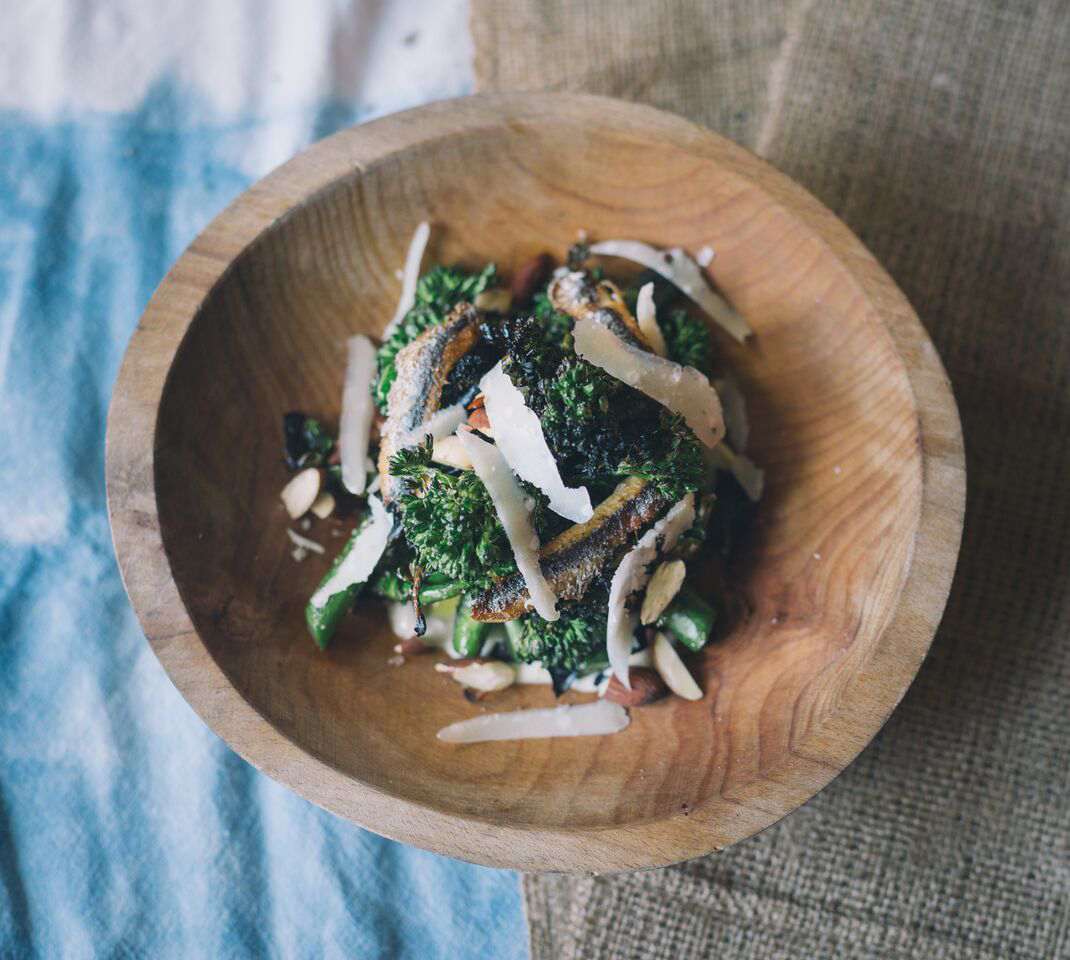