Break Out Your Dirndl and Celebrate Oktoberfest Around Boston

’Tis the season for steins of lager. 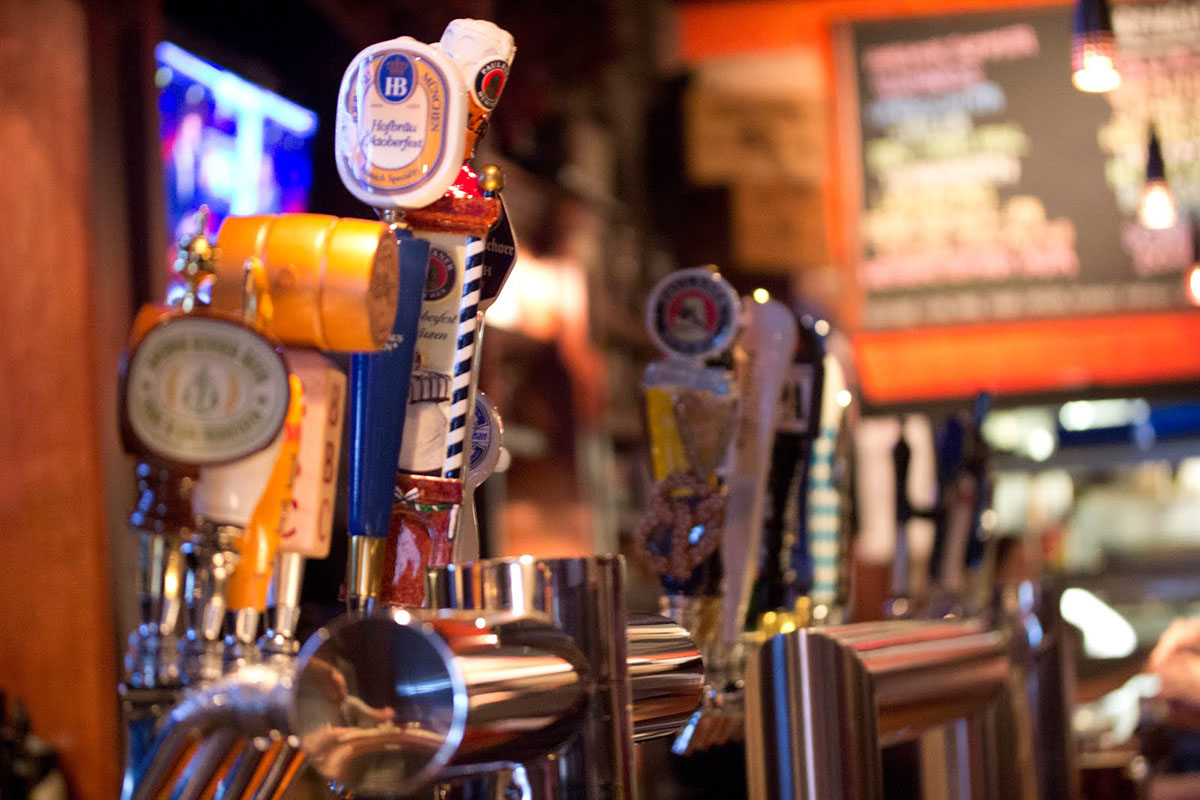 Looking for a place to lift your stein and shout Prost! this fall, without a peak-season trip to Bavaria? There’s no need to leave greater Boston, where Oktoberfest oom-pahs in mid-September with local lagers, salty pretzels, wursts, and more. Check out the following events at breweries, bars, and restaurants this month—and make sure your dirndl or lederhosen still fits.

Every Wednesday in September and October, this Somerville beer hall has classic German fare on the menu. And of course, it’s already tapped the first kegs of Paulaner Marzen, Weihenstephan Festbier, and more. Plus, on Saturday, September 30, Olde Magoun’s hosts an all-day party with a ceremonial keg tapping of Paulaner Wiesn, German music, and food.

Jack’s Abby has focused on lagers for its relatively short seven years, while Weihenstephaner has been in the business for more than 1,000—founded in 1040, it’s the world’s oldest still-operating brewery. The two join forces at the venerable bier haus Brewer’s Fork for a one-night celebration of Oktoberfest liters.

With chef Tony Maws’ house-made sausages with kraut, carrots, and potatoes always on the menu at Kirkland Tap & Trotter, it’s one of our go-to spots for fest fun. This weekend, director of operations Carl York taps the first keg of the season of one of his personal favorite beers, Ayinger Oktoberfest. 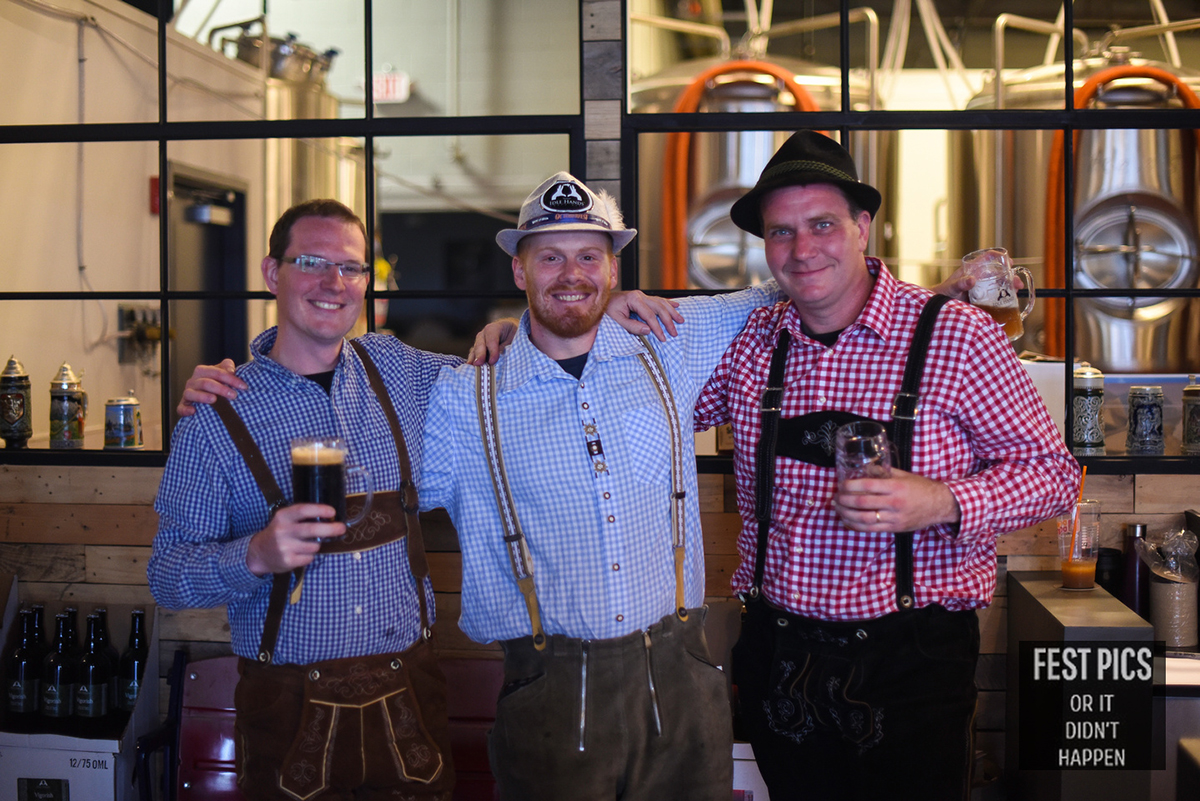 The athletically inclined can begin the first official day of Oktoberfest with a charity 5K run; the Malden Lions Club-sponsored event begins and ends at Idle Hands brewery. For the rest of us, the party starts at 10 a.m., with Awake Nitro Brewing coffee, Fat Boyfriend Bakery, and Cafe 101 at the brewery for breakfast. Well-known downtown German restaurant Jacob Wirth is coming by in the evening with traditional sausage sandwiches and kraut, alongside “bombs” from a new venture, Da Bomb Food Truck. There will be live polka and other music throughout the day, games, and more fun. And of course, the lager is flowing: Brocktoberfest, Emelyn, Brunhilda, and more will be on draft, plus the debut of a sixth anniversary American Strong Ale, too. 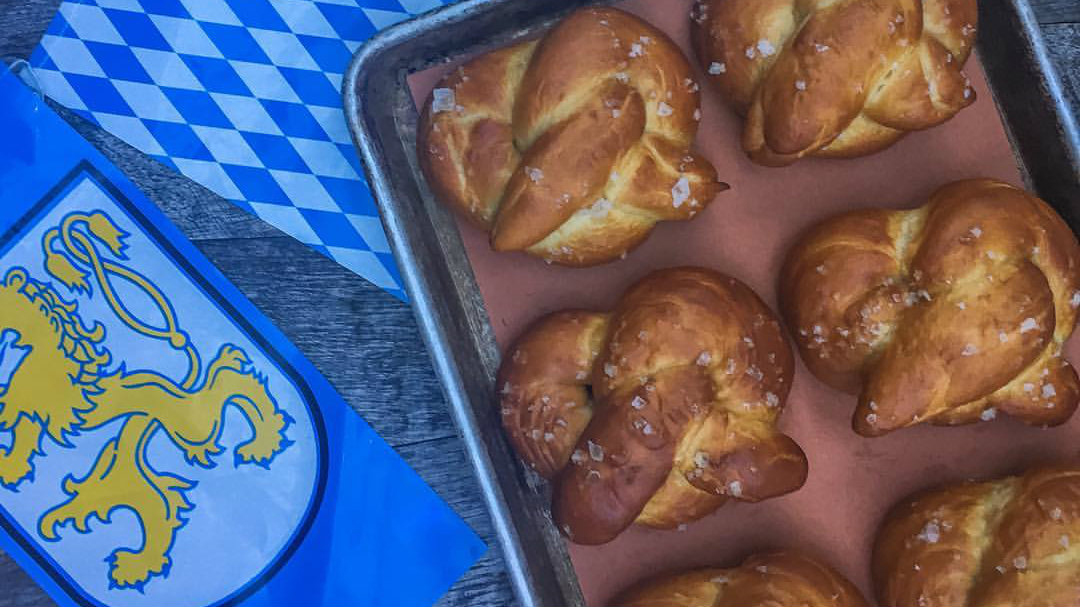 Bavarian-style pretzels are on the Oktoberfest menu at Rosebud. / Photo provided

Munich-inspired specials grace this Davis Square hotspot from September 16-23. Get your first taste on the Rosebud patio on Day One, with mini-stein flights (!), sauerbraten, haus pretzels and beer cheese, and more, and look sharp: There will be a photobooth.

Both locations of this beer bar—Davis Square and the South End—have wurst and kraut, chicken schnitzel, house-cured and smoked geräuchertes rindfleisch (beef brisket), and more Oktoberfest specials available through October 3. To kick things off, the original location is pouring flights of Paulaner, Hacker-Pschorr, HofBrau and Weihenstephaner—some of the tents you’d find in Munich—alongside German snacks, oom-pah music, and more. 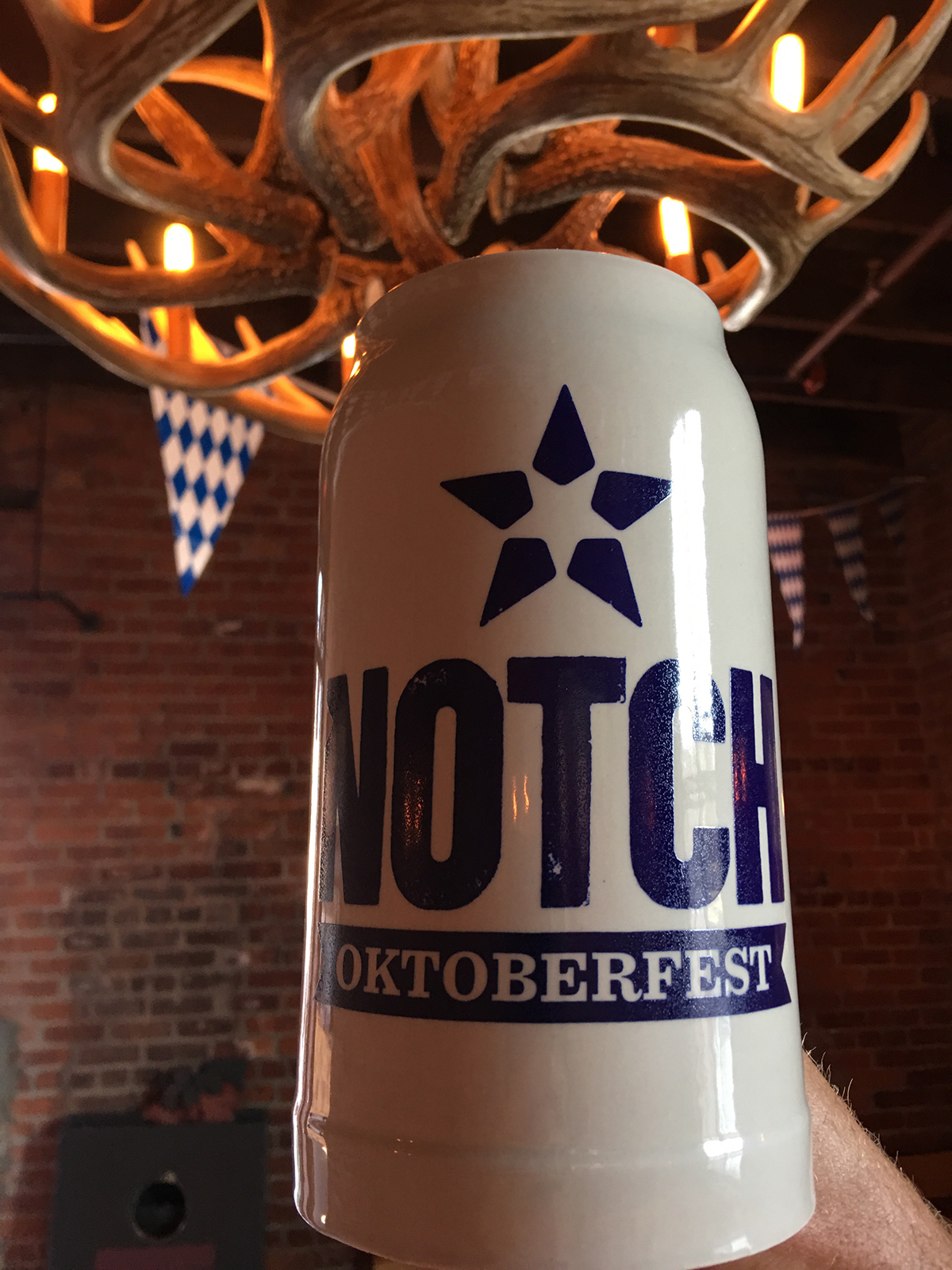 You can always get a liter stein of lager at this Salem beer garden. But to celebrate the festive fall season, Notch is inviting Peabody institution Karl’s Sausage Kitchen & European Market over for, well, a sausage fest. And the most incredible news of all: The session beer pioneers have made their first-ever non-session beer, a 5.8-percent Fest Bier. Notch is taking over part of its parking lot for this event, so invite your friends—and take commuter rail or ferry. Tickets include a custom, ceramic liter mug; live music, German food from Karl’s, and “a whole bunch of gemütlichkeit.”

This all-lager brewery has a number of Oktoberfest-themed events on its busy calendar, but this one, at State Park in Kendall Square, is complete with stein-hoisting contests, sausage tossing tournaments, and “all the beer,” per the organizers. 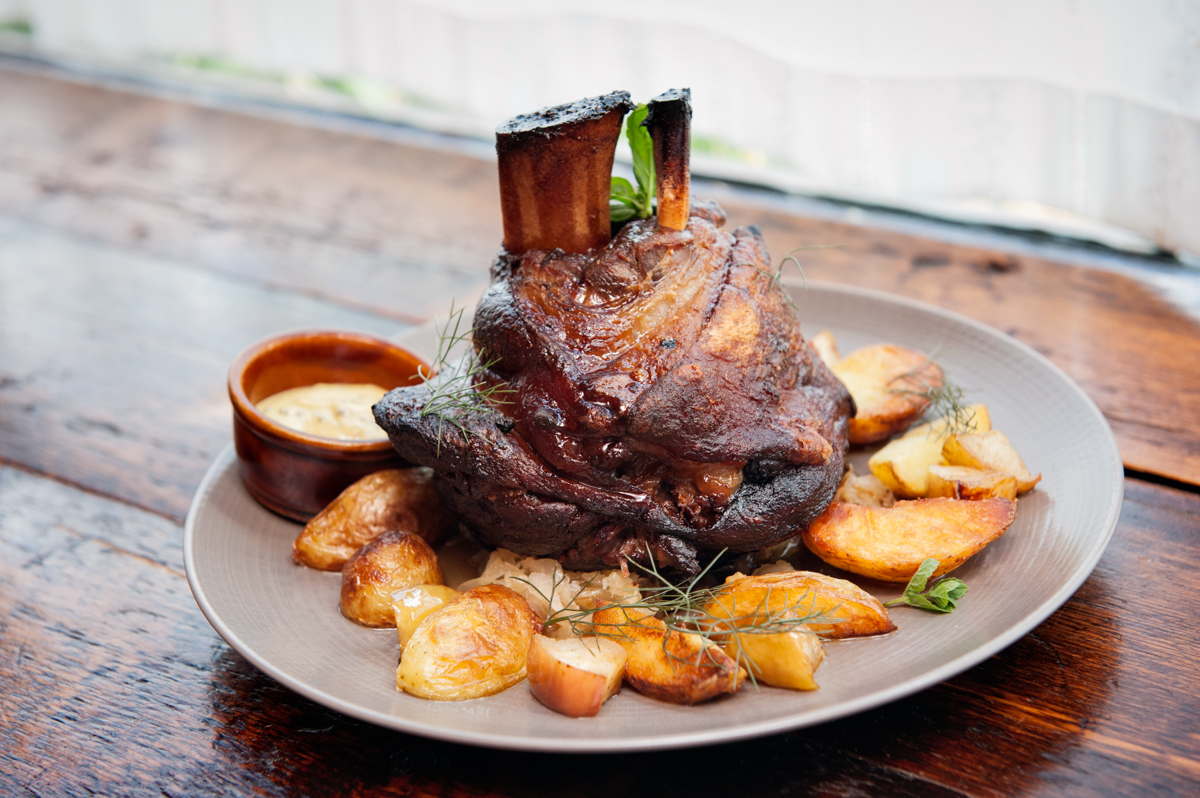 A two-pound, beer-braised pork shank at Bronwyn. / Photo by Chelsea Kyle for “FOUR REASONS TO SAY ‘PROST!’ AT BRONWYN IN SOMERVILLE“

Every day is very Bavarian at this Somerville sausage haus. But from Thursday, September 21-Sunday, October 15, chef Tim Wiechmann doubles down with an irresistible menu of weisswurst, spätzle, beer-braised pork shank, and more.

The beer list is forthcoming, but expect “a very special beer release” and traditional liter steins, of course. DBCo. will expand into the parking lot to double capacity (and make room for the Mad Bavarian Brass Band), Revelry Food Truck is going German for the day (sausage po’boys, anyone?), and more.

Neighborhood Oktoberfest with Lamplighter and Bondir

Cambridge neighbors Lamplighter Brewing Co., Bondir restaurant, and Niche Urban Garden join forces for this first-of-its-kind event. The two-day celebration will have special treats by chef Jason Bond both days, and Oktoberfest flavors by Parlor Ice Cream Co. on Sunday. Saturday will see a stein-hoisting competition, and other food pops up throughout the weekend. Bondir is also accepting reservations on Sunday night for Bond’s four-course Oktoberfest menu ($55 + optional beverage pairings).

The dormant JP Beer Garden, which hasn’t popped up around Boston lately, returns at this year’s edition of the Urban Grape’s beer branch’s Oktoberfest. Chef Owen Royce-Nagel is providing his famous pretzels and mustard (for free!), alongside Grillo’s Pickles, and a tasting lineup featuring more than two dozen fall seasonal beers from Castle Island, Boulevard, Ommegang, Ayinger, Barrel House Z, and more. There with be a festive band, too.

Not Oktoberfest, but a quintessential October fest. Now in its 10th year (!), brewmaster Will Meyers gathers the world’s best pumpkin beers together at his brewpub for a orange-tinged tasting of epic proportions. The festival spans three sessions on Saturday, October 28, but tickets go on sale September 15.