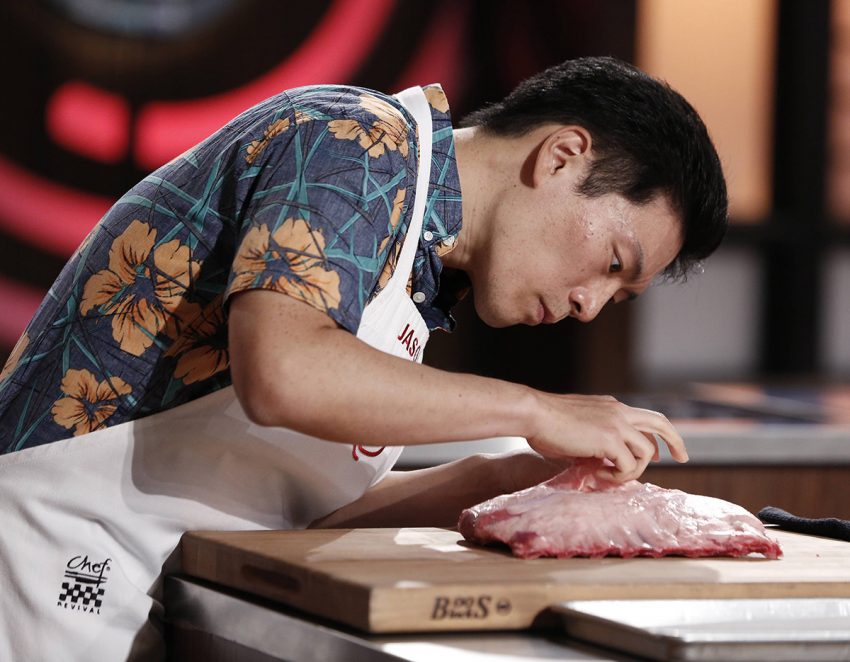 As Red Sox ace Chris Sale was vying for his 300th strikeout this season, Newton’s Jason Wang was cooking his heart out on MasterChef on Fox. The high school music teacher ultimately lost the title—and $250,000 prize money—to Brooklyn’s Dino Angelo Luciano, but Wang’s “amateur” chef days are over, according to host Gordon Ramsay. All three finalists, including Eboni Henry, impressed the critical celebrity chef.

Wang took many risks with his appetizer, entree, and dessert courses, representing his cooking style, and his first generation Chinese-American heritage, he said. He made an uni custard with fruits de mer to start, showcasing the New England seafood he grew up with. For dinner, he wrapped black cod in tofu skin, which judges Aarón Sanchez, Christina Tosi, Ramsay, and finale guest chef Joe Bastianich had never seen before, and served it in an unusual pea shoot sauce. Dessert is Wang’s specialty, and he combined assertive flavors like yuzu and chocolate in a gorgeous sandwich cookie.

Ramsay said the “zesty, vibrant” dessert had a “touch of magic,” and Tosi said the plating was amazing. But ultimately, the judges rewarded Luciano’s run in the MasterChef kitchen. The quirky dancer matured on the show, and showed he learned a lot, the judges said. And it’s pretty safe to say he could get a job in one of Bastianich’s 30-plus restaurants if he wanted to. The guest judge and Mario Batali partner—Bastianich co-owns Eataly Boston and Babbo in the Seaport—said Luciano’s “unorthodox twist to classic Italian” cuisine showed “a stroke of genius.”

Wang, who was live-tweeting the two-hour finale tonight with friends, fellow MasterChef runners-up, and Boston restaurant folks at Pagu, plated his uni custard in bowls made for him by one of his Newton South High School students, he shared.

Chris Sale, meanwhile, became the first starter in American League to hit 300 strikeouts in a season since Pedro Martinez did it in 1999. According to the Boston Globe’s Pete Abraham, Sale is still 13 strikeouts behind Martinez for the all-time team record.

Wang teaches culinary classes at the Cambridge Center for Adult Education in Harvard Square. On Friday, he co-hosts a class and dinner there with fellow MasterChef-testant Cate Meade.