We visited the food media company's longtime home in Brookline Village to understand exactly why it's expanding into state-of-the-art studios in the Boston Seaport later this fall. 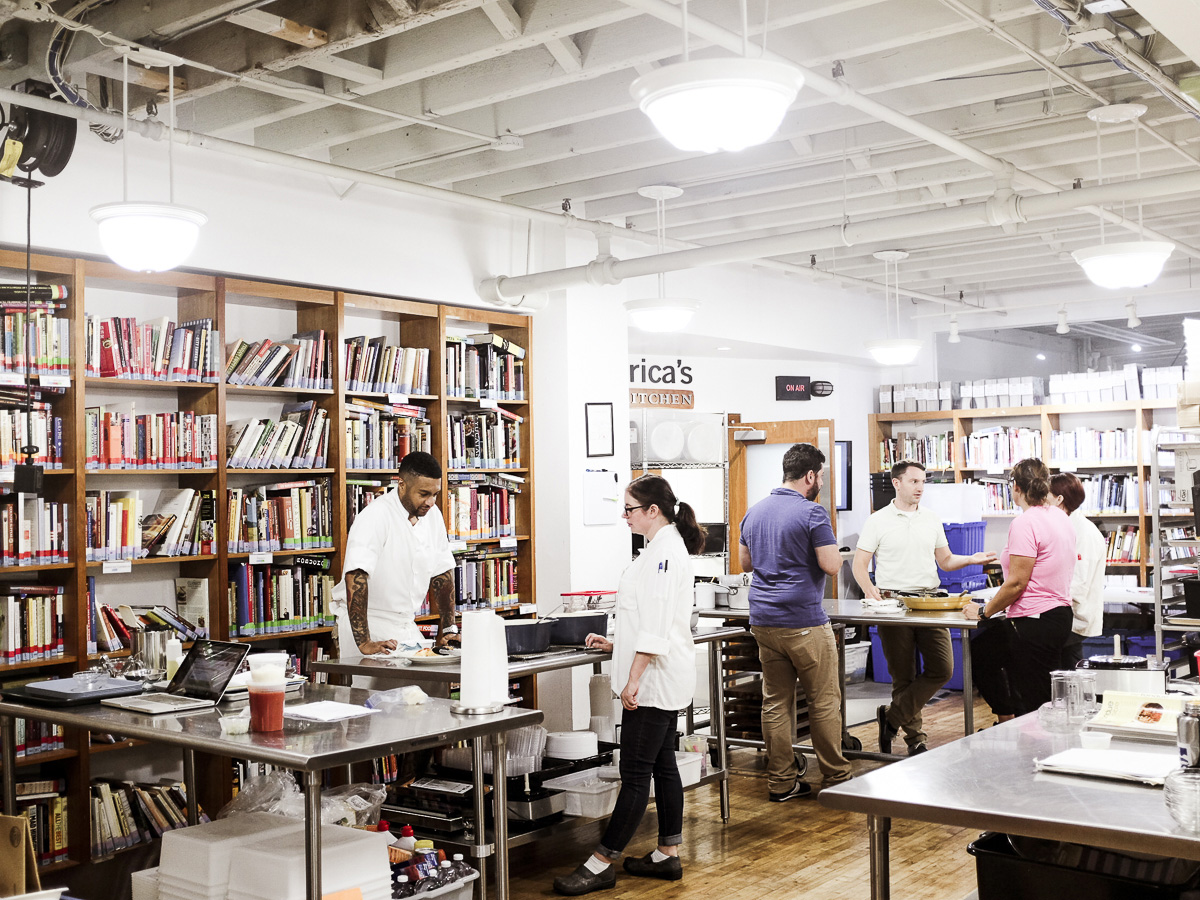 Employees meet and test recipes in the library at America’s Test Kitchen in Brookline Village. / Photos by Toan Trinh

During a recent tour of the soon-to-be-former America’s Test Kitchen headquarters in Brookline, test kitchen manager Meri Lippard offered to show me the control room. “Sure,” I responded, and expected to be led into a room buzzing with video production monitors, maybe a couple sound boards, dormant boom mics, tripods.

Instead, the small, L-shaped room, adjacent to the main kitchen, was lined with a few top-opening chest freezers, and Metro racks (moveable, steel shelving) stacked with a couple dozen pressure cookers, and rows and rows of extra “common stock” ingredients—shared bags of flour, cans of tomatoes, etc.

This was near the end of a whirlwind, 20-minute tour of the main floor of America’s Test Kitchen, the 20-plus year home to what is now a multifaceted, food media production company that employs 200 people. I was there to catch up with America’s Test Kitchen ahead of its move this fall to the Innovation and Design Building in the South Boston Seaport. The move will happen in the next two weeks, says communications director Brian Franklin. 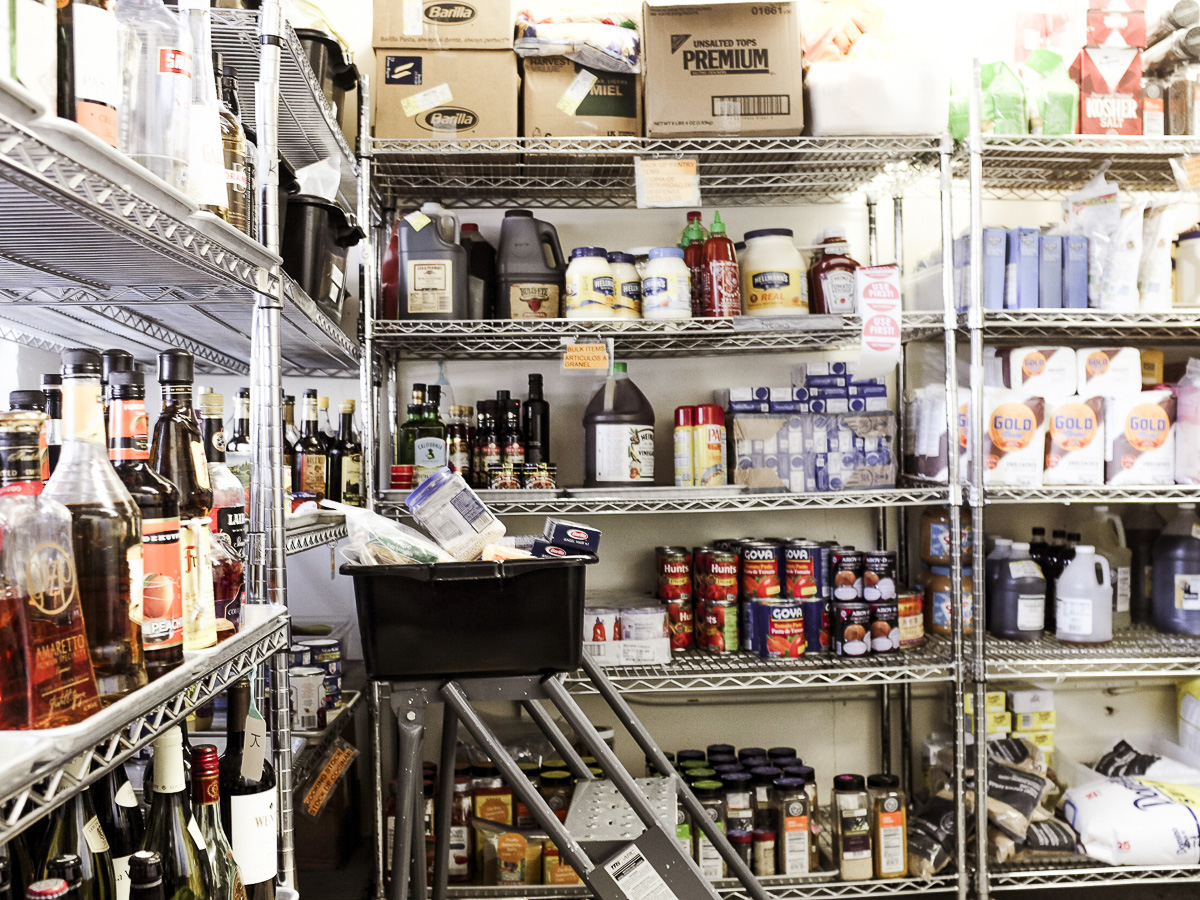 Stored ingredients in the “control room” at ATK in Brookline Village. / Photos by Toan Trinh 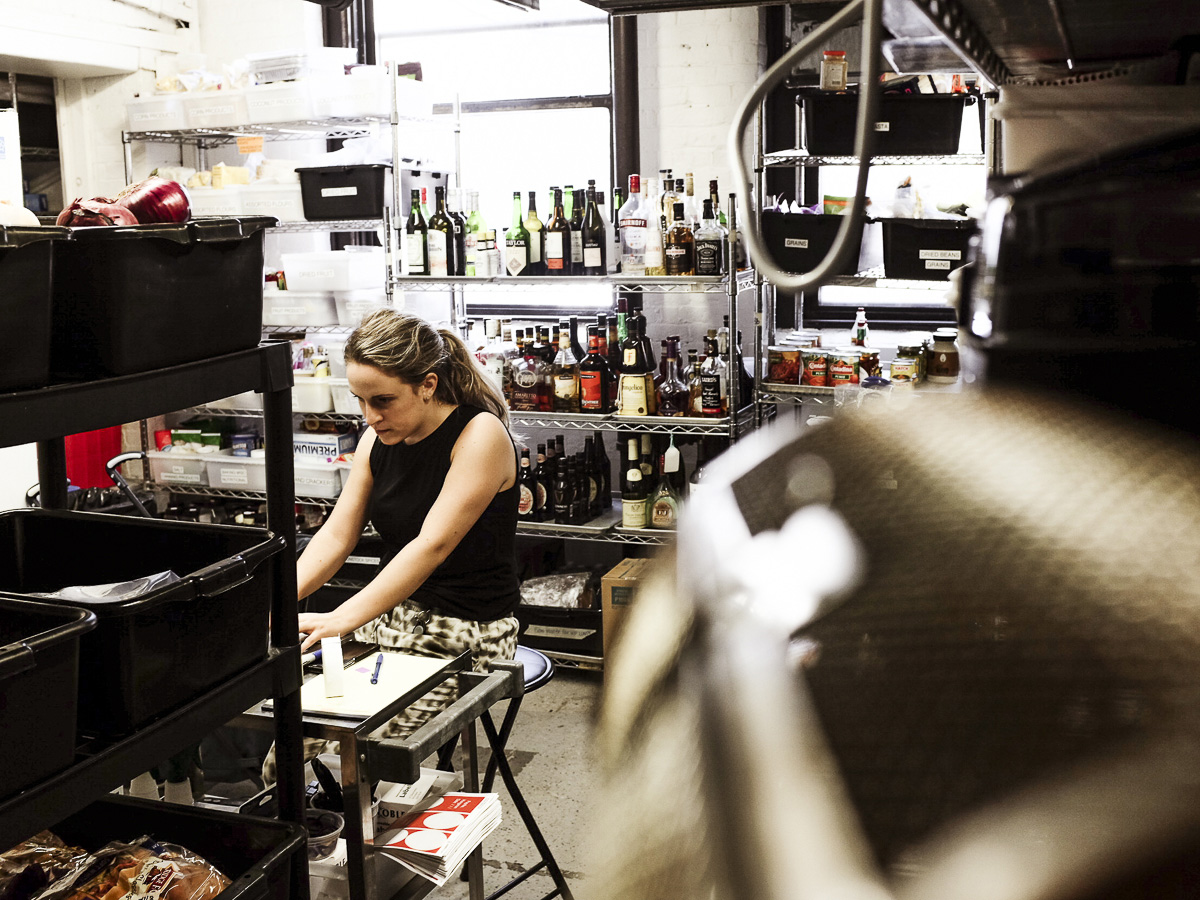 Someone works in the “control room”/storage area at ATK in Brookline Village. / Photos by Toan Trinh

Even on a “slow” day, as Lippard described the summer afternoon of my visit, the labyrinthine rooms at the longtime ATK headquarters were bustling with activity. I had already seen the “library,” a common area lined with about 5,000 books, that’s also used for independent research, recipe testing, and grocery sorting. I visited the small kitchen, in use on this day for a cookbook photoshoot. We had already seen the steamy dish room, and the main pantry, full of common stock ingredients and teams’ unrefrigerated produce. We poked our heads into the facility’s only walk-in cooler.

And of course, I saw the main kitchen, where the eponymous TV show is filmed. There were a handful of test cooks working on several different projects in there, including roasting a bunch of holiday turkeys.

But it’s the improbably named “control room” that best exemplifies the company’s need for new digs. To me, it appears to be a pantry. But for three weeks every spring, it becomes an actual “control room,” with blinking monitors and other equipment used to film America’s Test Kitchen, the PBS show, in the kitchen next door.

That means everything—all the pressure cookers, or whatever the teams are testing that week; all the sacks of flour, all the freezers—needs to be moved, Lippard said.

I asked where everything goes. “That’s a really good question,” she said. She started pointing. “All this stuff goes upstairs in a hallway, this goes in this hallway here, the freezer we move into a photo studio, the big chest freezer goes to the fourth floor. It’s like Tetris.”

I had just seen firsthand the creative uses of space that the America’s Test Kitchen crew employs, on what is supposedly a “slow” day. It’s clear that the company has outgrown this space, but I’m so baffled I can’t help but ask if the new headquarters will separate the vegetable stock from the TV monitors. 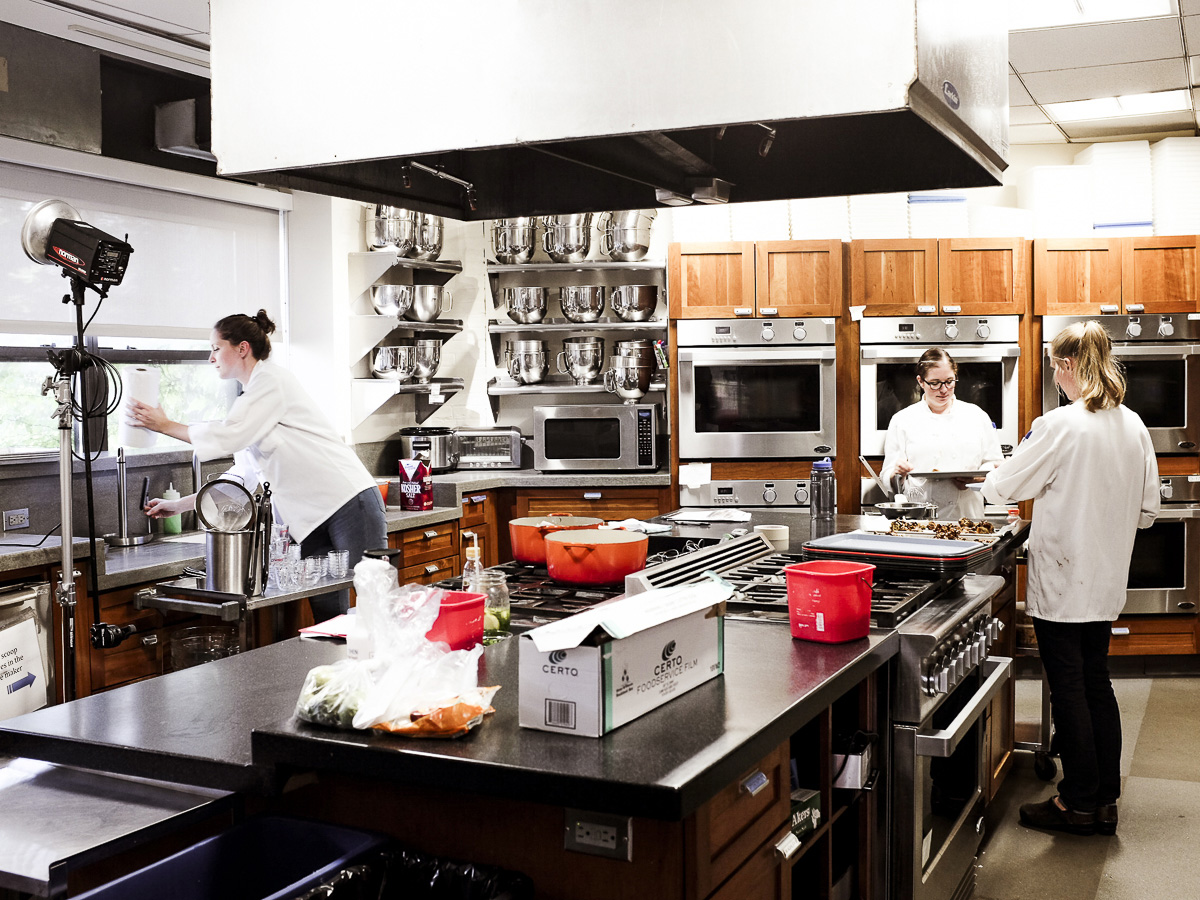 The small kitchen in Brookline Village, in use by a book team. / Photos by Toan Trinh 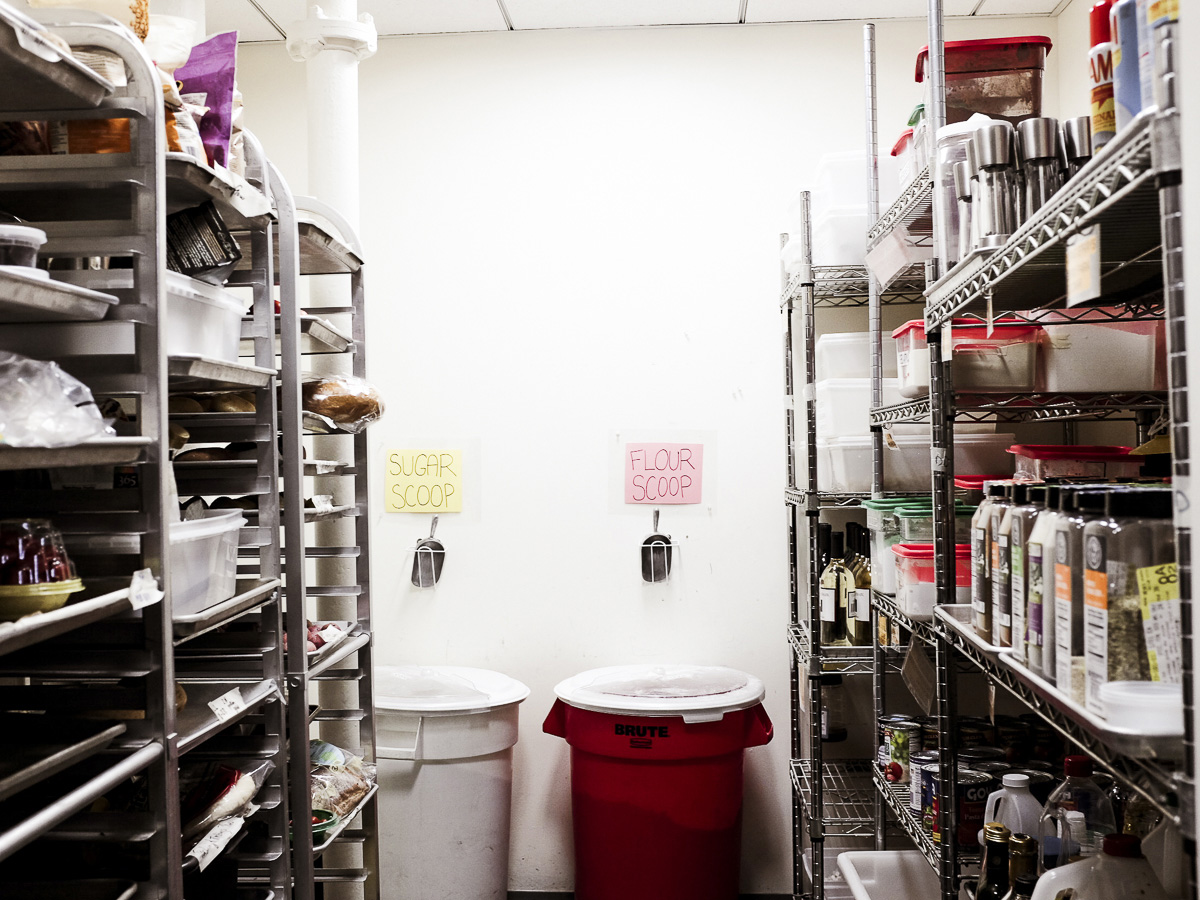 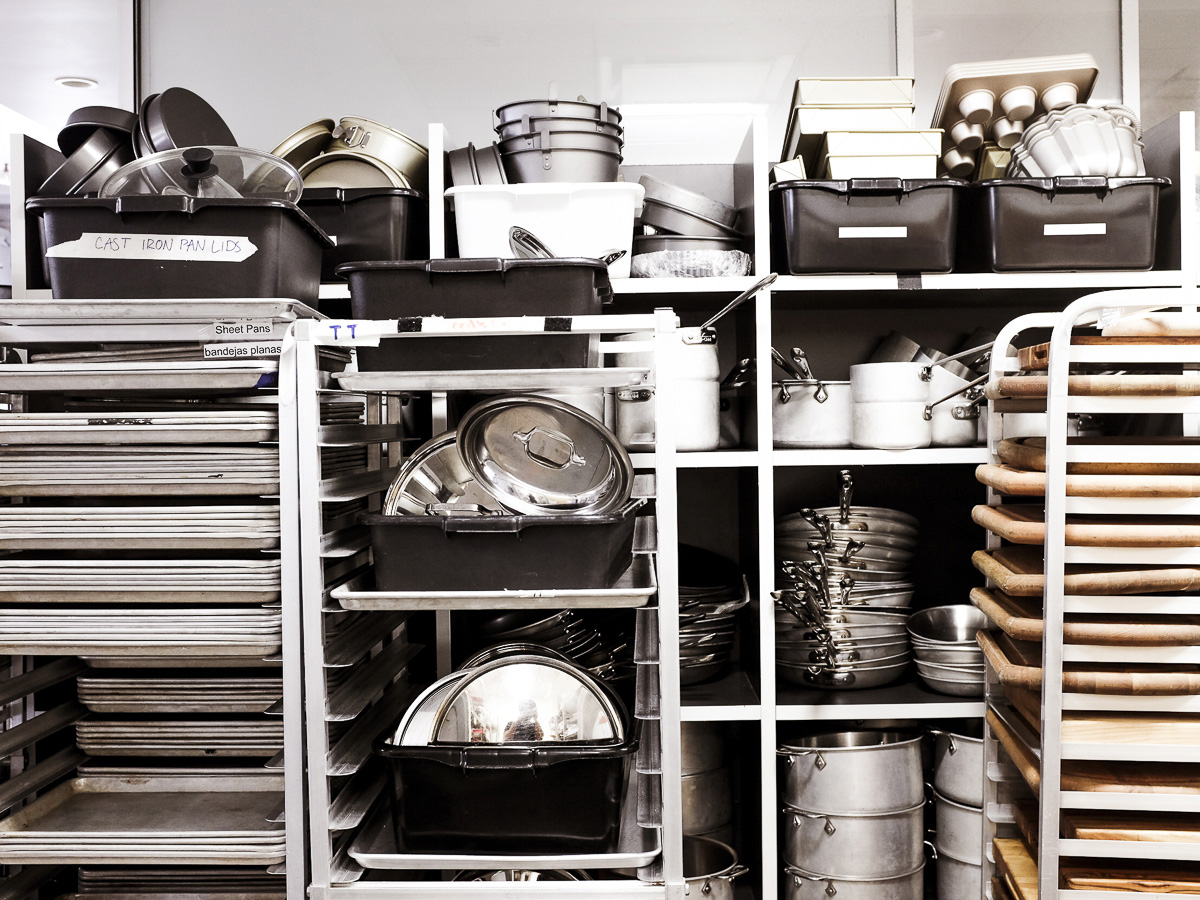 Stored equipment in a hallway at ATK in Brookline Village. / Photos by Toan Trinh 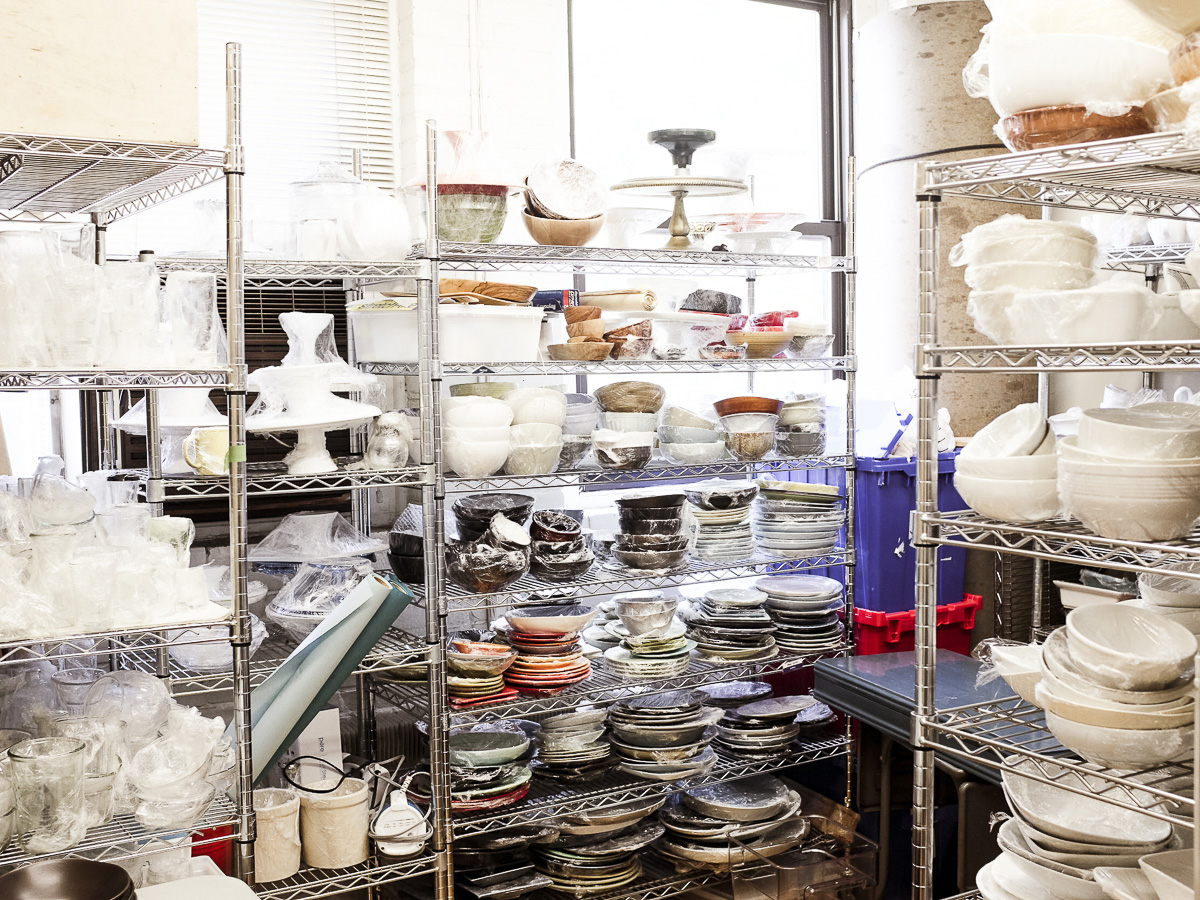 Equipment stored in a nook leading into the photo studio at ATK in Brookline Village. / Photos by Toan Trinh

America’s Test Kitchen moved into this brick, Brookline Village building in 1993, when it was just one magazine that occasionally produced an offshoot cookbook. Initially, it had offices only on the third floor, and all of its operational space on the second floor, said chief creative officer Jack Bishop, who’s been with the company since 1992. Cook’s Illustrated magazine, both of the company’s TV shows, and other products were “born” in Brookline.

ATK has grown to require more office space on floors one and four. And of course, the second floor’s operational space—as I had just seen—has been rearranged and MacGyvered to accomodate the many new uses the company has demanded over the years.

“As a privately held, independent media company competing against giants in the media space, [the Brookline headquarters] is a physical representation of how scrappy we need to be,” Bishop said. “We will continue to bring those genes forward once we move.”

When television production began in 2000 (America’s Test Kitchen the show debuted in 2001), ATK produced one magazine, twice a year; and did two cookbooks annually. Now, it has 23 newsstand issues per year of a couple different magazines, and it produced 14 cookbooks this past year. It would produce more video content if it could, Bishop said—see the “control room,” above. When the TV show debuted, ATK employed about 60 people, and less than half “were anything tangentially related to the kitchen,” he said. Now, out of its 200 employees, Bishop estimated about half are test cooks, editors, photographers, videographers, and others who routinely work in the kitchen.

The company has long considered finding a new location, but the effort really got going about two years ago, when ATK reorganized and hired its first-ever CEO, David Nussbaum. On December 1, 2015, Jackie Ford started as the company’s chief financial officer, with finding a new home among her main tasks. She commissioned space studies of the current headquarters, and administered employee surveys to help clarify what, exactly, they were looking for.

“Out of that, lots of [places] fall off the map,” Ford said, frankly. The company needed about 60,000 square feet, ideally on one floor; it needed a place that could handle its water usage, its electricity needs, its natural gas requirements. ATK needed to run substantial ventilation systems up and out of the building. They needed to have space where they could grill outside.

“We knew we wanted to stay in the city, near public transportation,” Ford added.

Overall, the senior management team looked at at least 25 different buildings, Bishop said. One day, the took an all-day bus tour to visit the top-tier candidates.

Ford had initially seen the Innovation and Design Building, where ATK is headed, very early on in the process, she said. But one hangup they were unsure about was grilling outdoors there, so she continued looking. When she came back to the property months later, Jamestown Developers had figured that part out, she said, and it became clear the Seaport was a great fit for ATK.

“We found [Jamestown] to be a good partner in terms of their track record with other companies,” Ford said, citing New York’s Chelsea Market as an example of the developers’ ability to revamp old, industrial buildings into vibrant, multi-use communities. “Their vision of what we’d be able to accomplish there was complementary to what we want to do.”

One of the things ATK wants to do is have “more of a public presence,” and its new location in the Seaport will help, Bishop said. ATK will hit the ground running next month with the company’s first-ever event, the Boston Eats food festival, on October 27 and 28.

Also this fall, it will debut a bright red, ATK-branded food truck, which Bishop calls “a physical extension of the test kitchen.” It will serve lunch (and, probably, sell cookbooks and other ATK-branded merch) several days a week to area workers and visitors to the Seaport. ATK will eventually offer studio tours, which the Brookline offices have never been able to do. Bishop is looking forward to developing relationships with IDB neighbors, like the Mass Challenge startup incubator, design consultants Continuum, Elkus Manfredi Architects, eventually Black & Decker and Reebok, and more.

“We’re looking to build more connections within Boston. This is lovely,” Bishop said, gesturing around his Brookline office, “but it’s almost like its own little world in Brookline Village. There are more connections for us to be had, and having a bigger footprint in a more high-profile place with more high-profile neighbors, there are already things we see we’ll be able to do.”

And there are undoubtedly things that will be possible that ATK hasn’t even thought of yet. Hosting a food festival, for example, wasn’t part of the plan when Ford started the real estate hunt, or even when the initial design plan for the IDB offices was finished, she said.

“But the space is flexible enough that we’re going to be able to do what we need to do. We [set out to] build the space where we can accomplish lots of things in lots of different areas, and can adapt,” she said.

They’re excited to show it to fans soon. But that doesn’t mean moving away from their longtime home is easy.

“I have a lot of affection for things that have gone down in this space, and for things we have accomplished,” Bishop said. “But I have also seen that this space has been a limitation at times because it was really never designed for all the things we are doing, not to mention all the things I want to do. I’m excited to see what we can do when a space is working with us.”