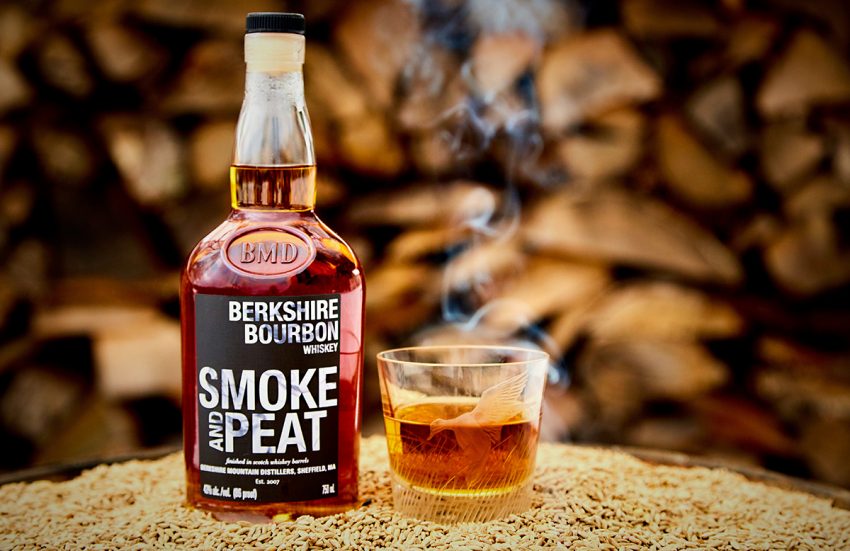 Rain showers are forecasted in Boston to usher in the first couple days of autumn—and that’s a perfect reason to add a new bottle of brown booze to your bar cart. A smoky Scotch, perhaps? Or a smooth American bourbon? With Smoke and Peat Berkshire Bourbon Whiskey, the newest product in Berkshire Mountain Distillers’ lineup, you don’t have to choose.

“I am not sure if it’s a complicated bourbon, or if it’s a beginner Scotch,” says Berkshire Mountain founder Chris Weld. “It’s a wonderful amalgamation of the two worlds.”

The Scotch barrel-aged bourbon was initially released in April, after several months’ rest in casks shipped to Western Mass. from Ardbeg and Laphroaig, two of the world’s top-tier Scotch distilleries in Islay, Scotland. Weld had been looking to source quality Scotch barrels for nearly a decade, he says, and finally bought “a few dozen” last year and filled the first crop with his award-winning whiskey (which, by the way, is already barrel-aged for about four years).

The Smoke and Peat bourbon isn’t necessarily a new product, but I first reached for the bottle during the cold-ish spell earlier this month. I’m a whiskey fan, but peated Scotch, with its strong smokiness, can occasionally be too acrid for my palate. I was intrigued by this best-of-both-worlds mashup, though, and it delivers. Berkshire Bourbon’s vanilla, spice, oak, and subtle chocolate notes aren’t overpowered by the peat smoke, though that is pronounced both on the nose and in the flavor.

“This is a very approachable blend of the two,” Weld notes.

The whiskey world seems to agree: Smoke and Peat was awarded an “extraordinary” score of 95, the “ultimate recommendation,” in the Ultimate Spirits Challenge in 2017.

“Part of that is it’s a small world of us producers, and they’re fun to work with. I like to do neat things with others, and provide new experiences,” Weld says.

He embarked on the Smoke and Peat project—a peated cask-aged rum will come out by Thanksgiving—for a similar reason.

“I love the biochemistry of producing whiskeys, and I love the changes you can impart on something with a collaboration with someone else,” he says. “It’s also the full-circle journey,” he adds: The oak barrels were actually made in the U.S. and originally aged somebody else’s American bourbon before they were sent to Scotland, only to return to this side of the pond at Berkshire.

Aging whiskey isn’t an exact science, so Weld can’t say when the other Craft Brewers Whiskey Project bottles will be released, and he can’t say just how long the Smoke and Peat will be available. He plans to fill each Scotch barrel only once, and then find a new owner who’s interested in creating something else fun with the well-used casks.

But he’s confident Scotch newbies and bourbon lovers will be able to find Smoke and Peat at the Sheffield distillery, and on shelves across the state, for “as long as we can” offer it.

Got a bottle of Smoke and Peat Bourbon, but not sure just how to drink it? Weld likes his simply on the rocks, and Berkshire Mountain provides the following recipe for a simple cure-all.

Muddle ginger in the shaker. Shake all ingredients with ice and double-strain into a into the rocks glass with fresh ice. Pour a dash extra of Smoke & Peat over the back of a bar spoon so that it floats atop the drink.