Are you a small-plates progressive, or a structured-course traditionalist? A Harvard Square bistro draws a line in the sand. 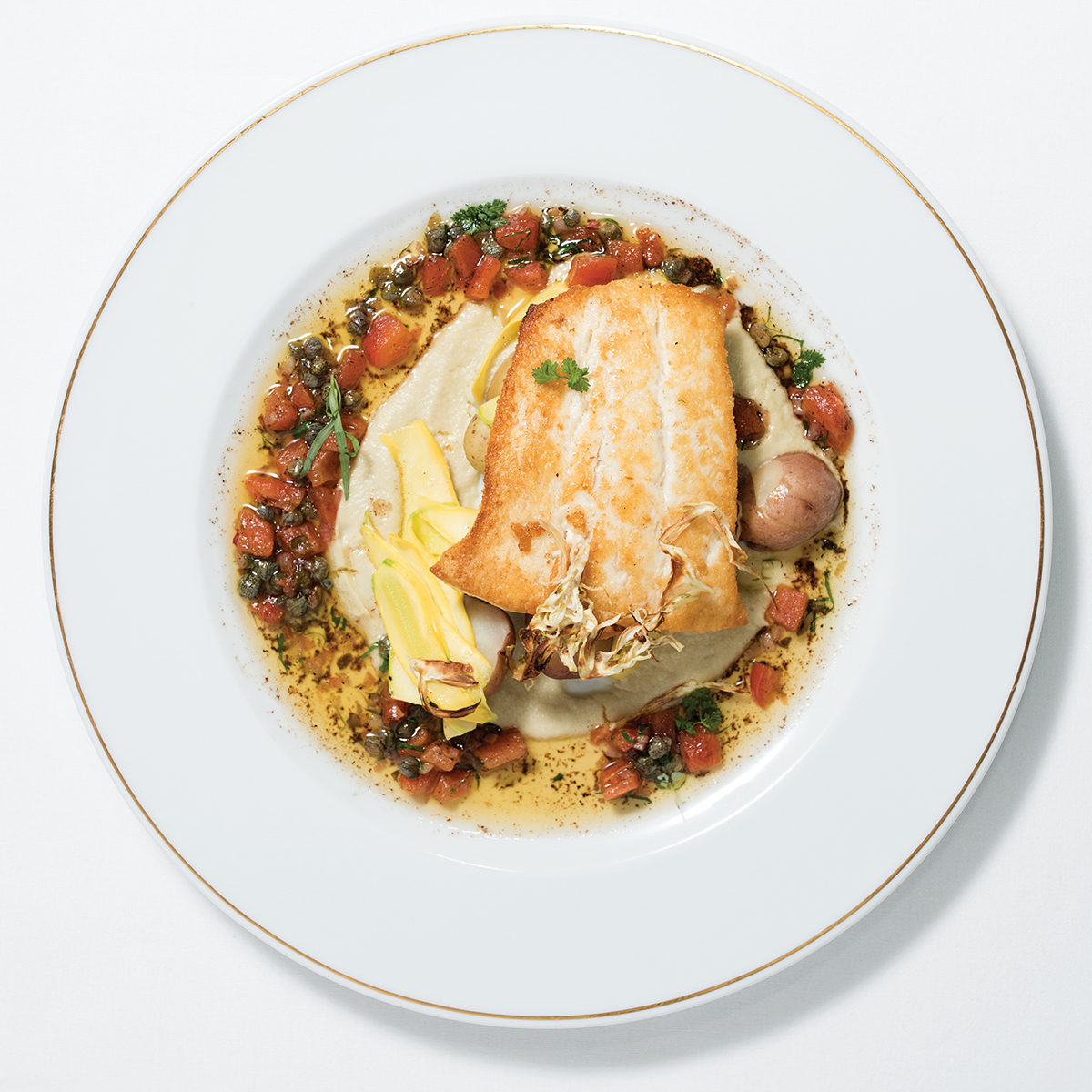 Position A: The salmon ($37) at Les Sablons is lovely, served atop sautéed leeks, crispy apple, and sorrel-brightened cream. Technically flawless, the dish is a paean to the timelessness of classic French cuisine in an age of trendoid chefs glibly renouncing Escoffier for unchecked eclectic fusion. It’s a refreshing reset—and proof that culinary relevance doesn’t require ironic kimchi, shareable slider buns, or reinventing the wheel.

Position B: The salmon ($37) at Les Sablons is excellent, garnished with sautéed leeks, crispy apple, and sorrel-brightened cream. Though technically flawless, the dish represents a perplexingly conservative nod to the French resurgence currently animating the nation’s top dining scenes. These neo-Gallic hot spots are bringing back béarnaise, but with a modern flair: a touch of Thai basil, a hit of smoke, or at least a small-plates-y update. There’s a fine line between refreshing vintage and dusty déclassé.

Two viewpoints, both with merit. But we’re living in hyper-partisan times, folks. And I have a hunch that Les Sablons—the stylish Harvard Square French bistro by dream-team restaurateurs Garrett Harker and Jeremy Sewall—will be an either/or proposition for a goodly number of dining voters. Maybe I’m wrong. I hope I’m wrong. There are Jackson Cannon craft cocktails. There’s a gorgeous wine list by Lauren Daddona, our 2017 pick for Best Sommelier. The place deserves a constituency.

But for argument’s sake, let’s say you fancy yourself a moderate on the old Traditionalist–Iconoclast continuum. Me, too! Who needs to eat wink-wink ramen “poutine” every night of the week? 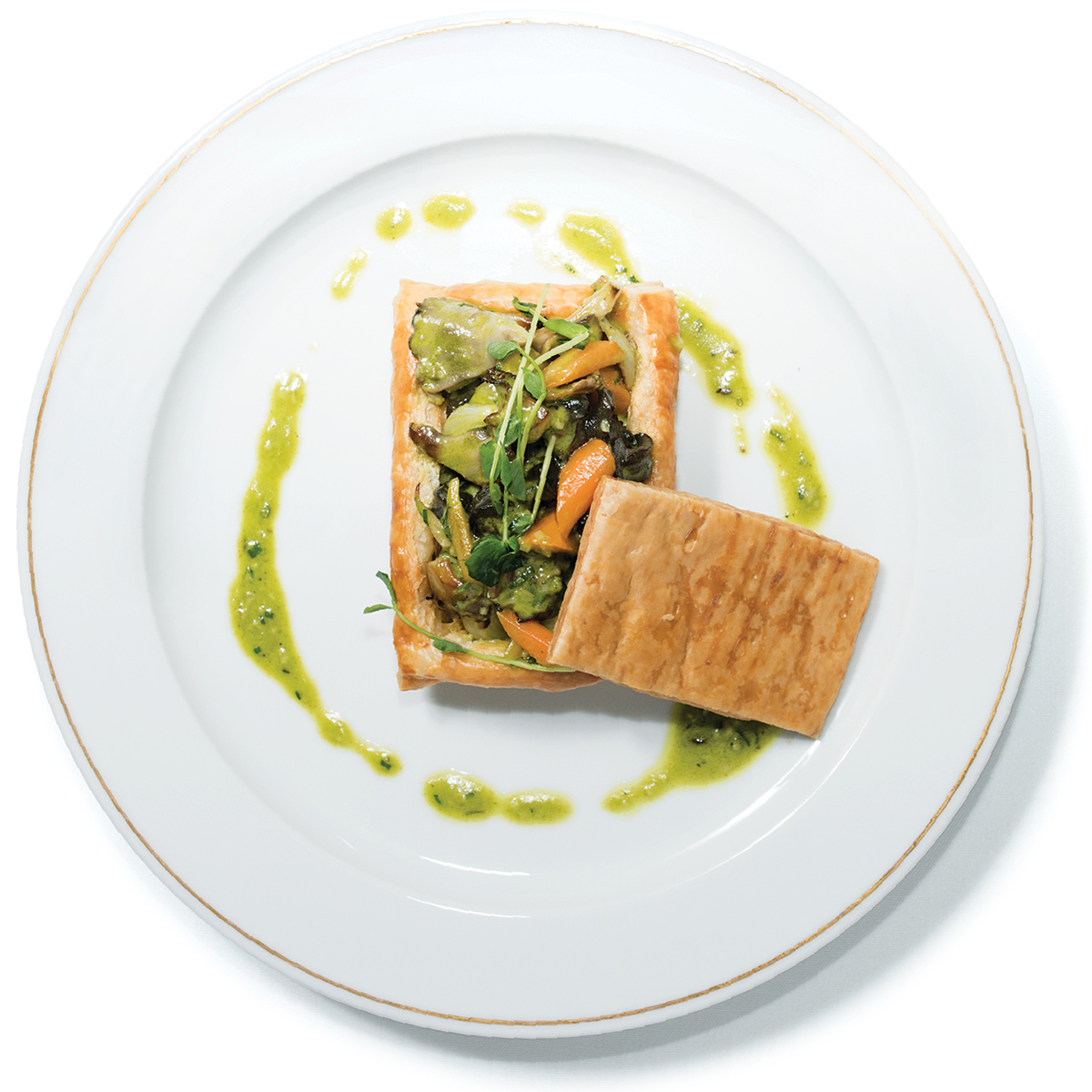 Realistically, though, I worry the kimchi-deviled-eggs contingency will give the place one go and exile it forever into the drinks-before-Waypoint “friend zone,” and that’ll be that.

There’s also the issue of meal structure. Can you hang with a menu designed for coursed-out dining? If you’re a hard-line getabunchathings-to-share type, it’s doable but tricky. Entrées here, especially, are built for one—or for co-conspirators who don’t mind bumping fork tines scavenging about for all the requisite swooshes.

Okay. For those onboard with entrées proper, and with not-so-neo French, there’s a lot to love here—starting with the strong roster of raw-bar bites. The black bass crudo ($15) punched up with basil oil, pistachios, and smoky espelette was a refreshing walk on the moderne side. Gorgeous beef tartare ($15) made with coarsely chopped prime tenderloin struck the optimal chewy/velvety balance, lavished with aioli bolstered with puréed oyster. You will not, um, need extra salt.

In even the most partisan political climate, there’s occasional reaching across the aisle. At Les Sablons, the Petite Assiette (literally: small plate) section is a gastro-moderate’s dream. Hand-cranked rye spaghetti ($15) tossed with bright, herbaceous pesto, black trumpets, and Parmesan was rich and vivid enough to tag-team 21st-century-style, or spin as a midsize entrée for one. And if classic French has a shot in hell at energizing the youth vote, the escargot vol-au-vent ($22)—gloriously flaky, golden-brown puff pastry bursting with tender snails, oyster mushrooms, and decadent gobs of garlic herb butter—may be just the dish to do it. 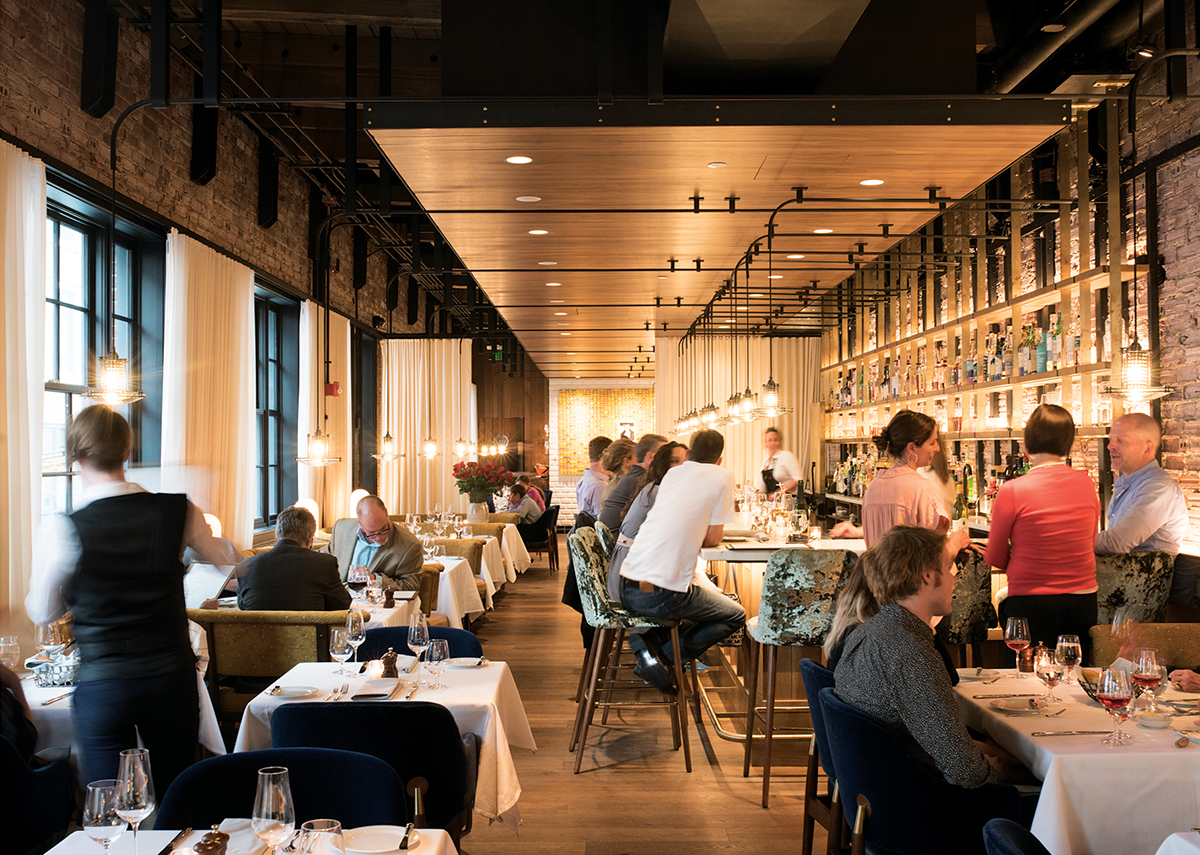 The Plat Principal section once again finds executive chef Sewall and chef de cuisine Brian Rae tossing red meat (also: poultry; fish) to their traditionalist base. Striped bass ($37) arrived perched upon a concentrated, saffron-perfumed fumet, finished with herbs and cream, and dotted with tomatoes, black olives, and marble potatoes that contributed acidity, astringency, and the structural uplift to keep the crispy skin out of harm’s way. It was terrific. I worry, though, that the ship has sailed on full portions of halibut. No matter how exquisitely prepared—this one ($38) came with roasted fennel, summer squash, and caper brown butter—a few bites in it starts to feel like a transatlantic voyage. The truffled chicken ($30) and Rohan duck ($39), by contrast, each had enough compelling moments of discovery, though the ponderous platings (forest-brown suprême sauce; roasted cherries) felt a bit like winter in July.

Service was generally polished—no surprise, given that Harker’s restaurants have long been the gold standard. But there were off moments, too. There was the server who pushed a $110 Marsannay so hard we surrendered. (Our budget: “Under $100, please!”). There was the time they presented a bottle I ordered to my friend for inspection. My friend who barely drinks wine even when she’s not seven months’ pregnant. Minor fumbles, maybe. But I can’t imagine them happening at Eastern Standard.

Speaking of which: There’s no better poster child than Harker’s Kenmore Square brasserie for the notion that envelope-pushing in and of itself does not a superlative restaurant make. It’s a beloved haunt where the food is solid—often better than solid—but more than that it’s an egalitarian haven that feels welcoming to diners of every gastro-political stripe. As much for adventurous foodies as for your cool great-aunt who wants a tablecloth and ingredients she’s heard of. And for the middle class as well as the one-percenters: At ES, the $23 steak frites is unimpeachable; at LS, the filet mignon with Bordelaise is lovely, but at $44 the stakes (ahem) are higher. At that price point, even conservative diners may expect occasion-dining transcendence, not the familiar hit parade done well.

At the end of the day, though, I don’t think Les Sablons’ biggest challenge is price. It’s that it lacks the big-tent inclusive feel of its Kenmore sibling: built for old guys like me and youthful trend-chasers. Nothing a little tweaking couldn’t solve: an expanded bar-bites menu, a few outside-the-box specials. After all, you’re but a 10-minute stroll from Waypoint, which—just saying—would make an excellent drinks-before-dinner stop, too.