Mystic Has Experimental Beer in the Can 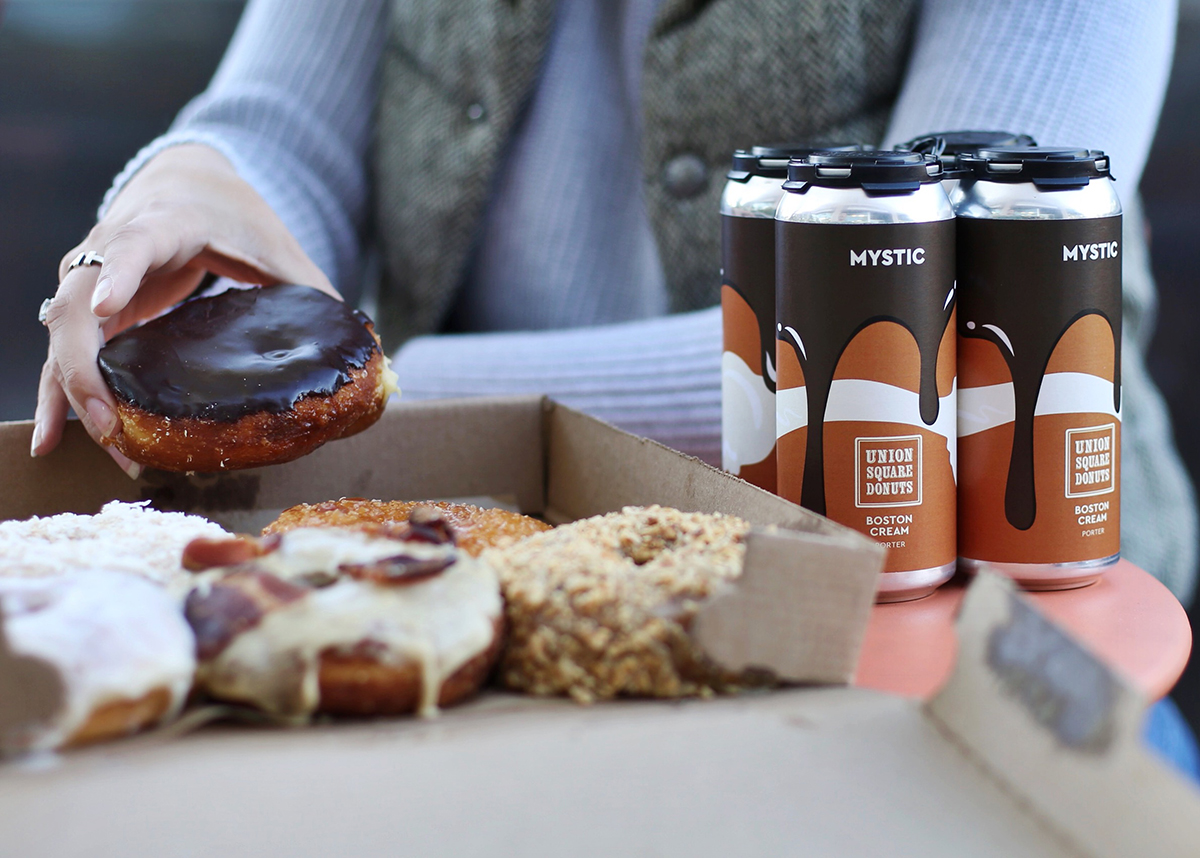 While you probably know Mystic Brewery best for its corked-and-caged bottles of Belgian-style ales and saisons, the six-year-old Chelsea company always had canned beer in its business plan, says founder and owner Bryan Greenhagen. But the first cans only rolled off the line last month—and now they’re flying out of the taproom. This weekend will see three new can releases, including an experimental collaboration with Union Square Donuts called Boston Cream Stout.

What took so long?

First, Greenhagen—who has a background in fermentation science and flavor development, not brewing—wanted to “learn our chops” before breaking the rules, so Mystic started with uncommon styles.

“Saison is really challenging. The [yeast] we like is really hard to use,” he explains. Even Mystic Table Beer, an “everyday saison,” as the low-alcohol go-to is billed on its packaging, requires a natural conditioning process—that means letting it carbonate in the bottle, rather than with forced carbonation (adding CO2).

“When we tried saisons and Belgian styles in a can, you can’t get as high pressure,” Greenhagen says. “You’re looking for lemon, pepper[-like] aromatics. When you can get a higher level of carbonation in a bottle, it expresses better.”

Perfecting this process in cans was something they wanted to do, but the other reality is that when Mystic was getting started, there was a much higher barrier to entry: It was before Iron Heart Canning was the huge player on the scene that it is now. Mystic started working with the growing mobile canning outfit earlier this year, beginning with hop-forward styles like Post-Apocalyptic Xanadu Triple IPA, Danger! Danger! Double IPA, and the perennially popular Voltage IPA. In addition to the Boston Cream Stout, this weekend will see can releases of Echo, a sessionable pale ale, and, possibly most exciting for the beer nerds among us, can-conditioned Table Beer. 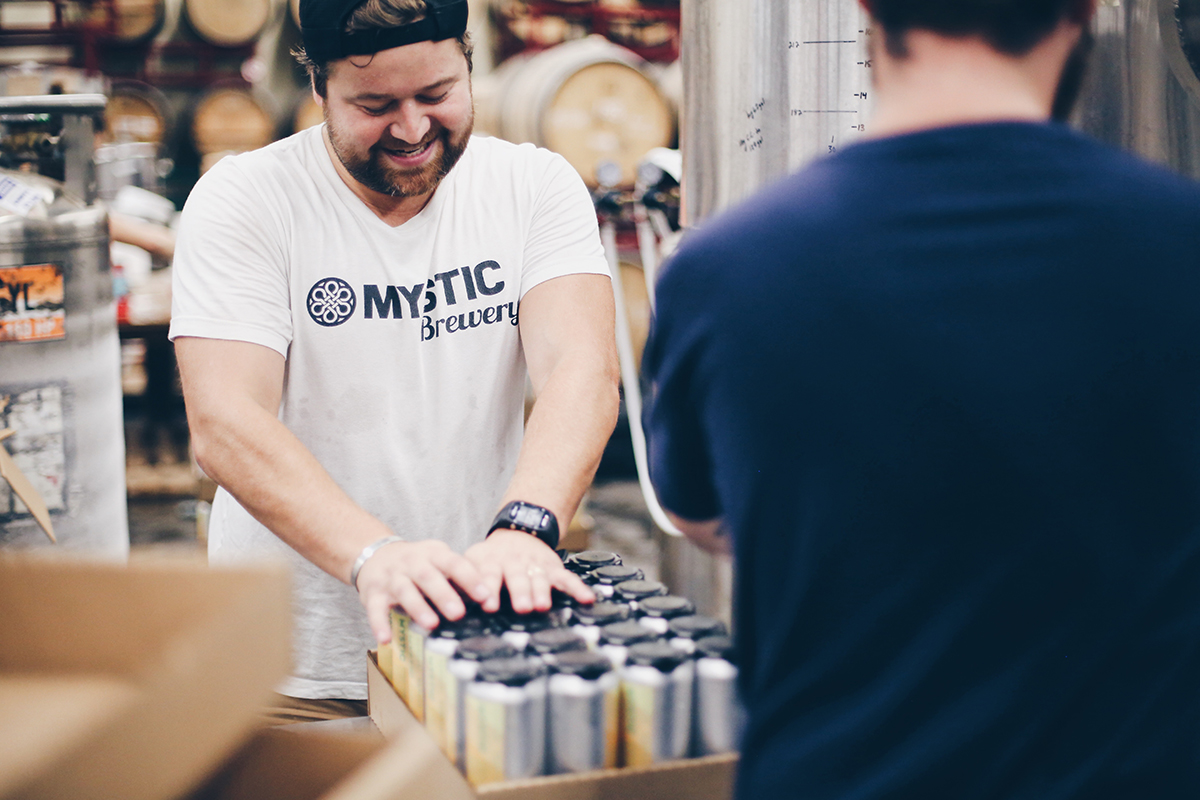 Mystic events and outreach director Tripp Nichols and a case of cans at the Chelsea brewery. / Photo by Regan Cleminson

The efficiency that Iron Heart’s business model offers wasn’t the only reason that Mystic decided now is the time for canned beers. It’s also undeniably what customers want.

“It’s changing so quickly, how people want to experience the beer—in taprooms, sitting outside. All those things are a huge change from when we started six years ago,” Greenhagen says.

That’s also partially why these new cans won’t see offsite distribution. The plan, for now, is to sell all cans at the brewery, with the exception of a few strategic drops of Boston Cream Stout to neighborhood spots in Union Square, Greenhagen says.

“Traditional distribution is a dinosaur,” he says. “[Cans] sell too fast [at the brewery] to even be distributed. This is nuts. In the past, people visit and they’ll buy a bottle, maybe a few people will buy a case when we cork-and-cage, which we’re still doing [with most Belgian styles]. But with cans, people are buying case after case.”

With the added hype of a release party with the beloved doughnut makers this Saturday—Union Square is bringing its signature “doughies” to sell alongside the Boston Cream Stout—it’s likely to be a busy weekend. But Greenhagen isn’t quite sure the novelty Boston Cream Stout will be as popular as fruity IPAs. And that’s okay. Following last fall’s release of the herbaceous Fernetical, a collaboration with chef and Fernet expert Jamie Bissonnette, the Boston Cream Stout is the second beer in Mystic’s Fabrication Series.

Stipulated on “flavor construction,” the series is “kind of the opposite of the old Mystic, where we know our chops” around classic beer styles, Greenhagen says. “This is no rules, just make something amazing.”

Each Fabrication Series beer begins with a flavor inspiration—Fernet, Union Square’s award-winning Boston cream doughnut—and uses novel ingredients to recreate that experience in beer form. Union Square cofounder Josh Danoff and his team of bakers helped Mystic head brewer Christian O’Neill break down the Boston cream doughnut flavor; no actual doughnuts were used in the brewing process. It required lactose, and a lot of cocoa nibs and vanilla beans, plus a touch of nutmeg, which Greenhagen says they would have never thought of without Danoff’s guidance.

Not all the Fabrication beers will be collaborations; an IPA with lactose is in the works next. The series is more about thinking beyond the standard hops, malt, and water of the beers of Mystic’s foundation, and using nontraditional ingredients. It’s putting Greenhagen’s flavor science PhD to good use.

And seeing people rush in to enjoy the fruits of his labor—by the case? That’s why he got into brewing in the first place.