Flour Bakery Is Coming out With a Rewards App

Do you order a couple of Joanne Chang's famous sticky buns every week? 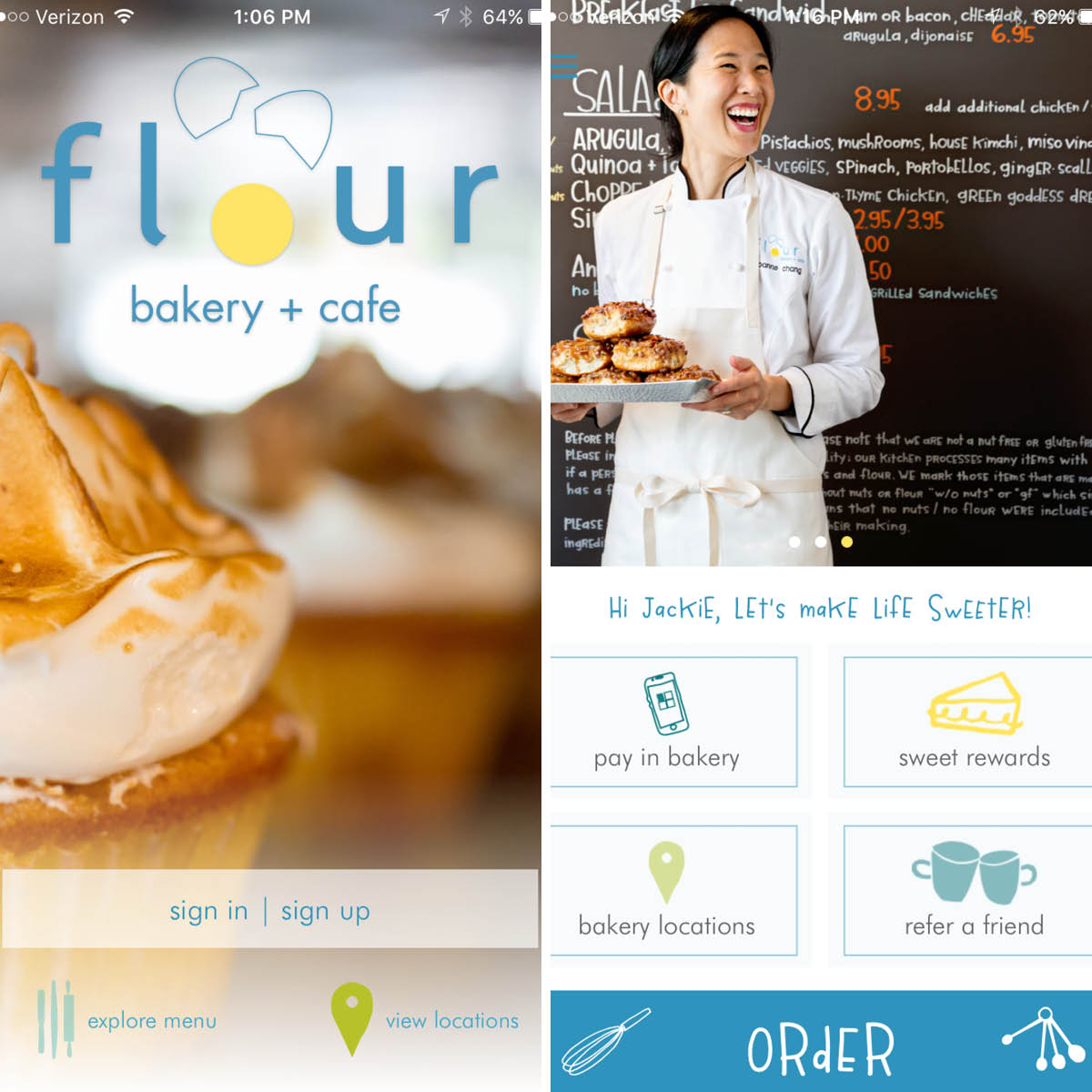 Screen grabs from the Flour app by Jacqueline Cain

It’s not just cafés in Harvard Square, Cambridgeport, and Back Bay that Flour Bakery has added in the last year. Joanne Chang’s empire has also grown its web presence. And soon, it will serve the most tangible piece of the new digital pie: Flour will release an ordering and rewards app for all mobile users later this month.

“All of us live in this digital world. It’s not really separate from the real world anymore,” says Flour’s director of operations, Mike Brucklier. “Extending Flour’s hospitality means we have to be really good in the digital world.”

That requires an intuitive, online ordering system—check. Flour signed on with restaurant point-of-sale system developer Toast last year to achieve that goal: The Boston-based company’s products and services manage transactions in-store; when you ask for a grilled cauliflower melt in person—and you know what, throw on one of those brown butter sticky buns for dessert—the front-of-house employee sends your order to the kitchen, processes your credit card, and prints your receipt using Toast. Now, it works the same way through Flour’s website, thanks to thoughtful “tinkering” on Toast’s part to make the layout user-friendly, and Flour location managers’ “mental energy” to ensure the online menu is always up-to-date, Brucklier says.

And this past summer, Flour launched delivery with Caviar. But the next step toward the goal of digital hospitality is the app. Not only is it easier to navigate mobile ordering with a native app than on a website, Brucklier says, but it’s also the best way Flour can employ its brand-new loyalty program.

Think of it as the coffee-stamp card of the 21st century—but in 17 years, Flour has never even had one of those.

“We do a great job of menu changes, offering new pastries, that kind of thing, but we’re really excited to present to all our guests—and so many are regulars—a way to say thank you,” Brucklier says.

Just signing up earns you a cookie. You get a treat on your birthday every year. And for every $100 you spend, a few bucks of “Flour Dough” goes back into your account. Plus, there’s a tiered rewards system—the PIEoneer level, Cookie Rookie, Frequent Flour, and so on—which unlocks new freebies per a certain number of visits, like recipes, hats, and T-shirts.

“We’ve done our best to hold true to what we are,” Brucklier says, which is why Flour didn’t develop a simple cash-credit rewards system. “As much as we’ve grown, we’re a local bakery in every neighborhood we’re in. We’re trying to mesh those things so it’s not just about saving $3.”

Another local developer, LevelUp, built the custom Flour app, so if you’ve ever used Sweetgreen’s mobile app, or Boloco’s, Caffe Nero’s, or many others, you already have an account. Besides online ordering and Flour’s loyalty program, the app features an in-store payment feature, ways to customize your profile for dietary restrictions, and more.

The Flour app will be available October 24 for both iOS and Android users, and it’s free.