Better Bagels, a swanky new Kings bowling alley and the Draft Room, and more are bringing new (night)life to the Boston Seaport. 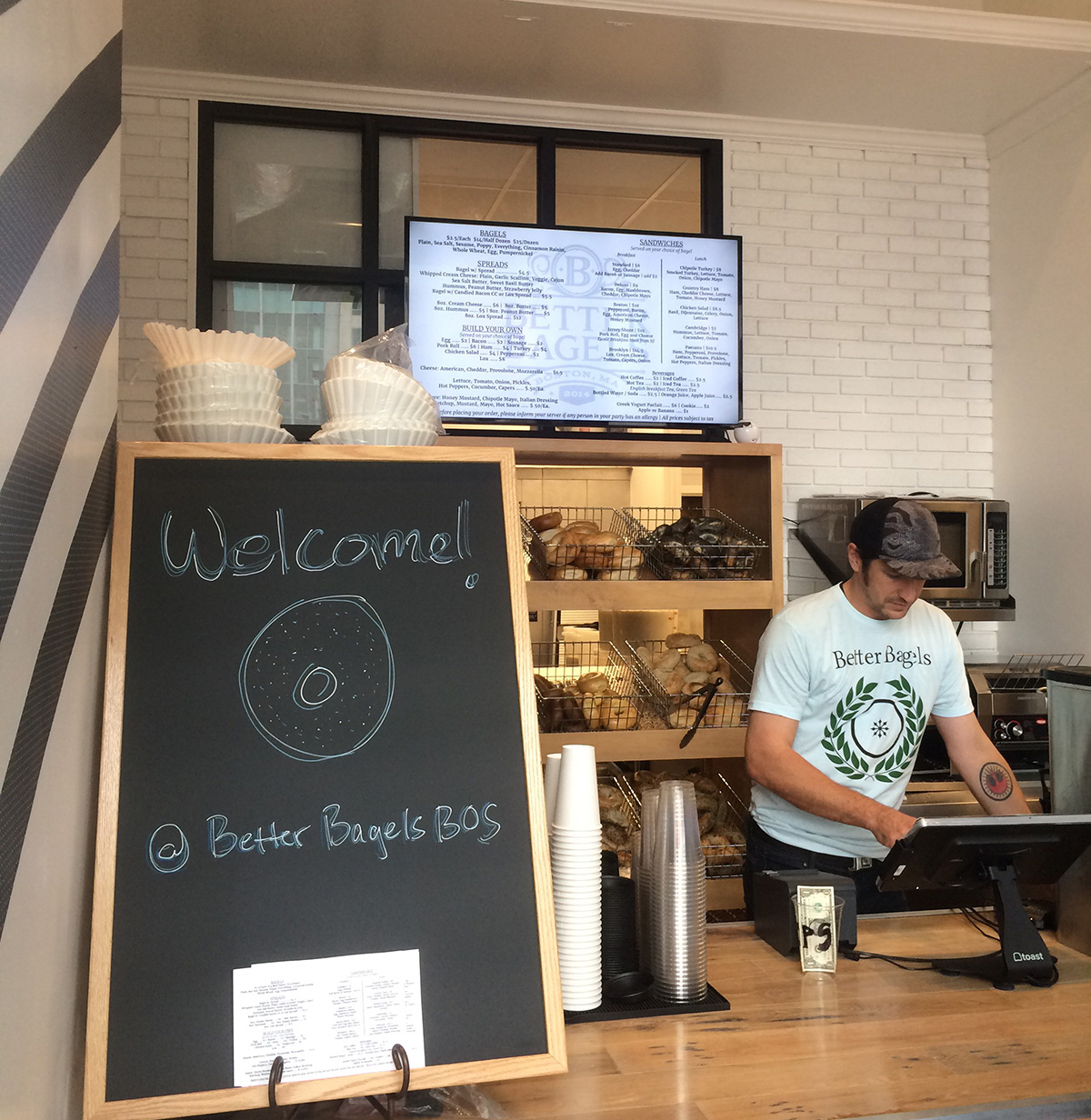 If you haven’t ventured down Seaport Boulevard in a while, it might be time to revisit—though mind the construction. A new entertainment district is taking shape, with Better Bagels’ long-awaited deli, a swanky new Kings Dining and Entertainment venue, Scorpion Bar and a sister nightclub, the Grand; and more restaurants on the way in the coming weeks.

All told, in the next five or so weeks, 10 new restaurants and cafés will debut along a couple-block stretch of between Sleeper Street and the Seaport Shake Shack. It’s more than 72,000 square feet of dining space, reports a rep for WS Development, the company behind the 23-acre project. Better Bagels is in the new Watermark building, and all nine others are at One Seaport, Boston’s largest mixed-used development project in more than 30 years, situated beneath shiny new residences at the Benjamin and Via.

Scorpion Bar and the Grand, which both opened last week, are the latest from the prolific hospitality group Big Night Entertainment. The team is also behind Boston’s Empire, Red Lantern Restaurant & Lounge, and GEM Italian Kitchen Night Club; along with the new, French-Californian café Explorateur. BNEG opened another Scorpion Bar at Patriot Place last year, and the original location is at Foxwoods Resort Casino, where BNEG has other clubby restaurants (or food-filled clubs), as well.

Scorpion Bar takes over 10,000 square feet at 58 Seaport Blvd., occupying the floor below its sister nightclub. It serves creative Mexican fare, like jalapeño ravioli, buffalo chicken flautas, and a pupu platter; plus tacos, burritos, quesadillas, guacamole, and more. It offers more than 100 different tequilas, including a house barrel from Avion Tequila. Other cocktails fuel the vibe—think shareable scorpion bowls, and signature margaritas. At night, Scorpion Bar transforms into a nightlife spot itself with live, local DJs.

Just a floor above, the Grand spans more than 12,000 square feet with state-of-the-art light installations, custom marble tables, leather, and much gold and plush. “Our vision for the Grand is to deliver a next-level nightlife experience with extraordinary VIP services and amenities, and an unprecedented entertainment lineup that will bring globally renowned DJs to Boston,” says BNEG partner Randy Greenstein.

If bowling (and/or beer) is more your idea of a good time, check out the flagship Kings Dining and Entertainment next door. Born as Kings Bowl in the Back Bay in 2002, the latest Kings, which opened to the public on Monday night, takes the company’s mission to merge food, creative cocktails, and social gaming to new heights. It takes over more than 20,000 feet of new construction in the Seaport, and fits 16 ten-pin bowling lanes inside, with options for private or semi-private games. It also has air hockey (including a four-player table), shuffleboard, foosball, billiards, hoops, and a full-on retro arcade with Mario Brothers, NBA Jam, and other classics. 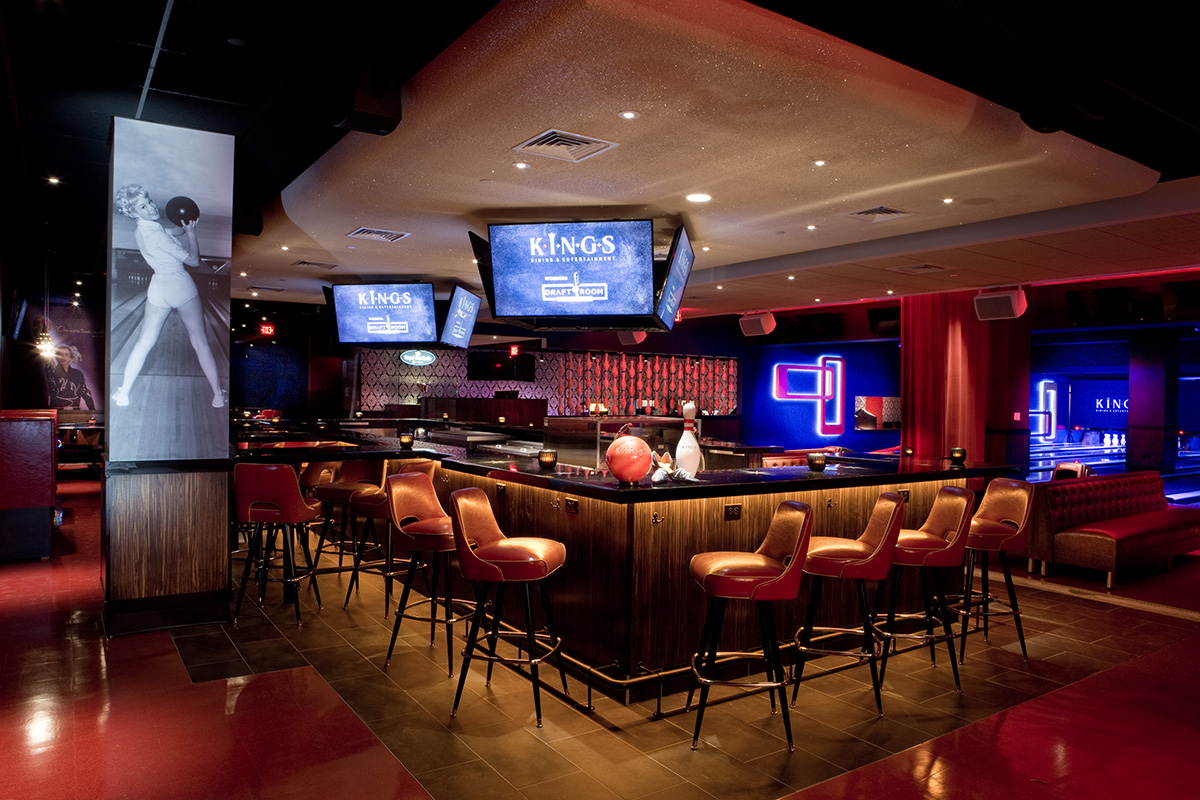 Kings Dining and Entertainment in the Boston Seaport. / Photo by Stu Garfield

For game-watching, there are more than 50 HDTVs, plus three 12-foot LED screens—just in the gaming area. The adjacent restaurant, a “gastro-sports bar” dubbed the Draft Room, has its own wall of stadium-quality LED screens. The 160-person pub has its own aesthetic—industrial brick and reclaimed woods, compared with the bowling alley’s red vinyl and glitter ceiling—plus 40 beers on draft, and a scratch kitchen dishing out elevated American comfort food, like an Italian burger with marinara, fresh mozzarella, and prosciutto; a turkey, apple, and double-smoked bacon melt with Gouda; Nashville hot chicken with honey-griddled cornbread; and hand-tossed spicy Hawaiian pizza.

The Kings bar also offers dozens of taps, and specialty cocktails; large-format drinks over here are called “Big Ball” cocktails. There are also family-friendly milkshakes and floats, though Kings does become 21-plus after 10 p.m.

Checking out all the new Seaport nightlife certainly calls for a visit to Better Bagels the next morning. Across Seaport Boulevard is the locally owned bakery’s first brick-and-mortar, though it launched in 2014 and now sells its New York-style rounds to several cafés and restaurants.

Cofounder Sam Harden says to expect about 10 different flavors at the deli, from sea salt and everything, to cinnamon raisin, pumpernickel everything, egg, and more, including some seasonal specials. Better Bagels makes breakfast sandwiches, including the Boston, with pepperoni, bacon, egg, American cheese, and honey mustard; and the Jersey Shore, with real New Jersey pork roll; and items like chicken salad, and an Italian sub-style sandwich for lunch. You can also build your own sandwich, and for carb-avoidant folks, there’s a Greek yogurt parfait. The shop offers hot and iced coffee, tea, and juices, as well.

Elsewhere in the ’hood: Another Caffè Nero is on the way, plus a flagship Tuscan Kitchen. La Colombe will open a coffee shop next month, and another Sweetgreen will join the scene. In December, look out for another Luke’s Lobster, and 75 on Courthouse Square, a new restaurant from the group behind similarly named properties on Liberty Wharf and Chestnut, along with the local Cheers chain.