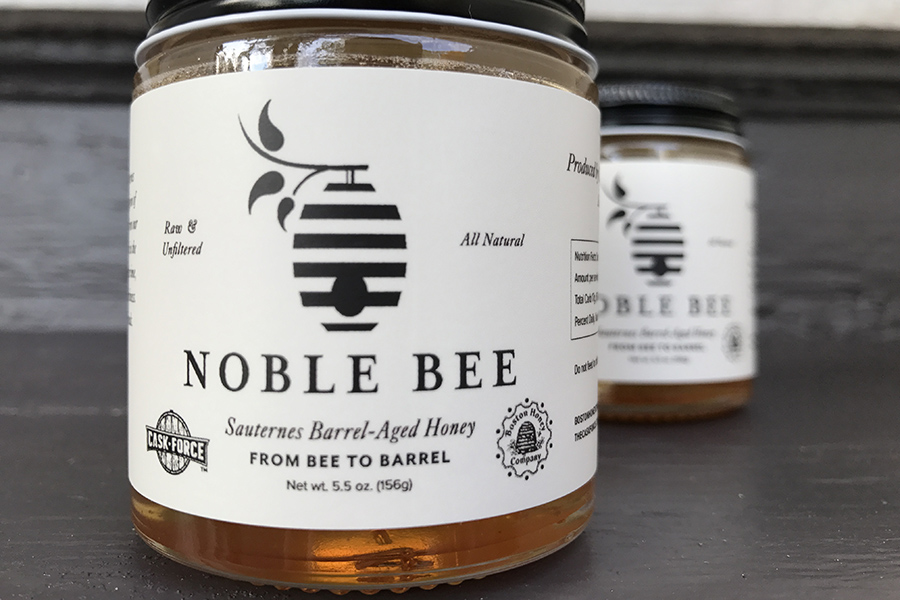 Sauternes—a sweet, French wine with fruity acidity from the so-called “noble rot”—is such a perfect complement to wildflower honey that spirits connoisseur Nick O’Connell is surprised no one has ever put the two together before. But he is the first: Noble Bee Sauternes Barrel-Aged Honey is the latest release from his company, Cask Force, and it’s already being put to good use.

Cask Force just bottled up the first batch of Noble Bee this week, and jars will appear at Wasik’s Cheese Shop and other Boston-area stores that carry its industry favorite Artist Series maple syrups. O’Connell is also sharing this unique new product with chefs like Benedetto’s Renae Connolly, and Townsman’s Matt Jennings. Townsman is hosting a Noble Bee release party at Townsman on Monday, Nov. 13.

Noble Bee started as a bright, citrusy, wildflower honey from Boston Honey Co., which sat for four months in a barrel from a highly rated French Sauternes house (O’Connell says the chateau prefers to remain anonymous).

“It gives [the honey] new complexities,” he says. “It pairs not only with hard cheeses, like pecorino, and some funky cheese that traditional Sauternes would pair with, but also with some bleus that wouldn’t normally go with honey.”

And it certainly goes with Parmesan.

When O’Connell brought Perna and Blackbird production manager Erin Connor a sample, their immediate thought was using it with a savory flavor to cut the sweetness, Perna says.

“Parmesan is a really pronounced flavor… that can be salty, sharp, kind of bitey,” she says.

And from a technical perspective, its dry texture works really well in Blackbird’s dough, she adds. The South End-born bakery has made a honey-glazed doughnut before, using flavorful honey harvested from owner Rebecca Roth Gullo’s beehives atop sister restaurant the Gallows. Noble Bee, with its wild origin, brings some of the same bold flavors, Perna says.

“It’s really floral, it almost tastes a little like marmalade,” she says. “There’s some oakiness you get at the end, too. It’s really crazy.”

And it’s the perfect complement to a cheese plate. At the Townsman party, Wasik’s will provide a spread to complement the host’s passed appetizers, and Blackbird will bring trays of Noble Bee-Parmesan minis. Plus, a small batch of the full-size doughnuts ($3) will be available at Blackbird’s two locations every Saturday and Sunday morning through November 26.

Taste for yourself what all the buzz is about.