A New York-Style Bagel Shop Is Headed for the Street

The Bagel Table will serve OMG! Bagels, which was the Chestnut Hill mall's first-ever pop-up. 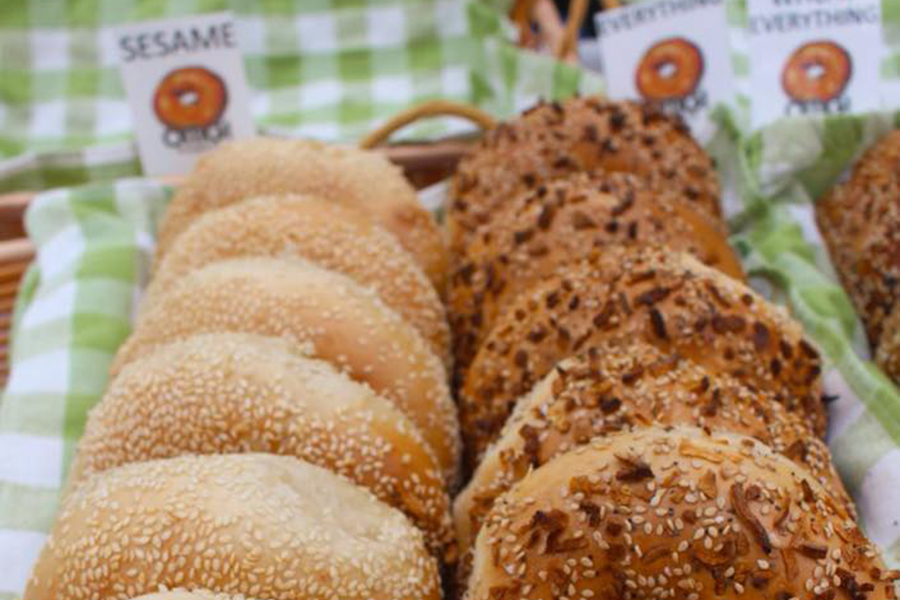 OMG! Bagels are on the menu at the Bagel Table at the Street. / Photo provided by the Street

The Street in Chestnut Hill continues to expand its dining options: Next month, the Bagel Table will bring a range of New York-style bagels and deli sandwiches, locally smoked fish, cookies, cakes, and more to the longtime home of Rosie’s Bakery.

The 40-plus-year-old cake shop apparently closed over the weekend, and Rosie’s moved its operations to a location in Brighton, Boston Restaurant Talk reports. The Bagel Table will continue to carry Rosie’s baked goods, but the main menu centers on more than a dozen rotating flavors of OMG! Bagels.

The Wayland-based bagelry, owned by Ed Eglitis and Curt Leiden, was the Street’s first culinary pop-up in 2015, and its products are available wholesale at locations around Boston and Metrowest. The Bagel Table is not owned by OMG! Bagels, but it will be the first place its products will be widely available to the public.

The Bagel Table will carry more than a dozen, rotating flavors of chewy, crispy rounds, including the classics, and OMG! signatures like French toast, and jalapeño Sriracha cheddar. The menu will also have a flat-top English muffin, gluten-free options, and locally made cream cheese, plus smoked fish, pastrami, turkey, and other toppings. In the summer, it will also offer Pearl hot dogs.

Rosie’s also closed storefronts in Inman Square and South Station. The company will continue to make its entire lineup of cookies, cakes, pies, and more in Brighton, and sell to two locations of Athan’s Bakery. The Bagel Shop will carry Rosie’s products, along with more New York-style desserts.

The Bagel Table is headed for the same block of the Street as fellow former pop-up, Ronsky’s, and is on track to open at the Street in December. The Chestnut Hill property is already home to Shake Shack, Legal Sea Foods, Juice Press, and more restaurants, and in 2018, the Street will also welcome Tender Greens and Chilacates.

UPDATE, Nov. 13, 3:30 p.m.: A previous version of this post said the Bagel Table is from the OMG! Bagels owners, but that is not the case. It is a separate, independently owned venture that will carry OMG! Bagels products.