Turns out, a mainly plant-based diet is partially responsible for Irving's speed and agility. 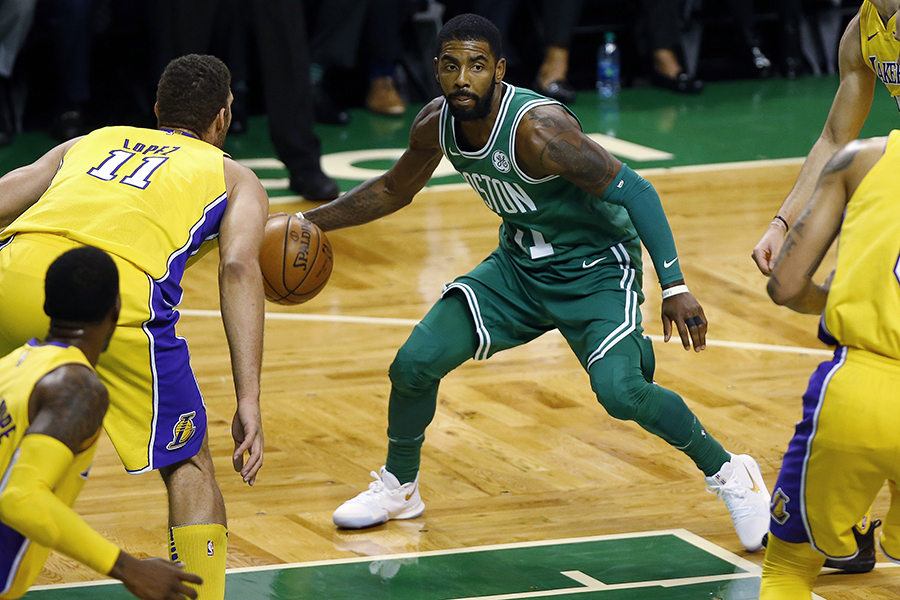 I was one of the truly heartbroken Celtics fans lamenting Danny Ainge’s decision to trade Isaiah Thomas to Cleveland this summer, despite the fact that every single person who knows more about the NBA than I do told me the Celtics got the better deal with Kyrie Irving in green. The Celtics sent Jae Crowder, Ante Zizic, and a couple draft picks to Cleveland, along with IT, in exchange for a point guard I had long considered a personal enemy.

Though I knew Isaiah was injured, and a couple years older than Kyrie, I couldn’t get past my personal respect and love of the Little Guy in favor of a guy who may or may not think the earth is flat. C’mon, man.

But 13 wins into the season, I am generously willing to concede that I am glad Kyrie is here. He’s scoring more than 20 points per game, orchestrating gravity-defying passes (see below), and turning over the ball less than ever, per my own eyes, and his stats on ESPN.

this Kyrie pass to Tatum is low-key bonkers pic.twitter.com/mwH4a1he9Q

It’s not just the LeBron-free spotlight that Irving can credit for his improvement. Apparently, his on-court dominance is thanks in large part to a mainly plant-based diet. And it’s only a little ironic that I first met Isaiah Thomas in Boston at a location of Tasty Burger.

Of course, Irving is not the first Boston athlete to link his excellence to a highly specific diet. But a new deep dive into a growing interest in vegan diets among NBA players suggests he may be the poster child for its effectiveness.

Bleacher Report Magazine looks at the decision by the Celtics star, and other players, to eschew meat. Based on a Harvard Sports Analysis Collective report published November 1, Irving’s speed has increased by an average of 26 feet per minute this year, B/R’s Tom Haberstroh reports. On the floor, the point guard looks trimmer than last year, but the stats show he has more energy than ever.

Irving’s teammate Jaylen Brown has never eaten beef or pork in all of his 21 years. And many players, including former Celtics champion Ray Allen, who owns an organic fast-casual restaurant in Miami, were inspired to go vegan-ish after watching a documentary on the subject. But Irving says his choice is his own. I’m still a little skeptical of Irving—he tells Haberstroh he doesn’t eat steak because it doesn’t come from anything “natural,” when last I checked, cows are indeed found in nature.

But I’ll give Irving the benefit of the doubt. “He notes that his 35-point effort in [Atlanta on November 6] came on the second night of a back-to-back, a circumstance that had habitually plagued him in his career,” Haberstroh writes.

It’s a clear example of the trend toward “small ball NBA,” which refers more to girth than length. “Teams are slimming down and using their athletic advantages to run the heavier teams off the floor,” says Haberstroh. “The weight of the league (adjusted for minutes played)… has fallen three pounds on average per player over the last four years.”

Irving told Haberstroh he’s a Sweetgreen fan, which is a redeeming opinion for the basketball star. I’d like to make sure he’s checked out Whole Heart Provisions, as well, which will be just a 10-minute walk from the Celtics’ new practice facility next year. And I’ll take this opportunity to apologize to Ray Allen on behalf of Celtics fans, and encourage him to open Grown here in Boston.

Haberstroh notes the trend toward small ball can be traced to the Golden State Warriors and the championship team’s penchant for “quick pace and even quicker threes.” The Celtics defend a 13-game winning streak tonight against the Warriors, who have won seven in a row themselves.

Update, 11 p.m.: Inspired by Celtics lead scorer Jaylen Brown’s 22 points in tonight’s win over the Warriors, this post was updated with details about his diet from the Bleacher Report article.