In town to promote his new series Raw Craft, chef Anthony Bourdain expressed some regret about past behaviors. 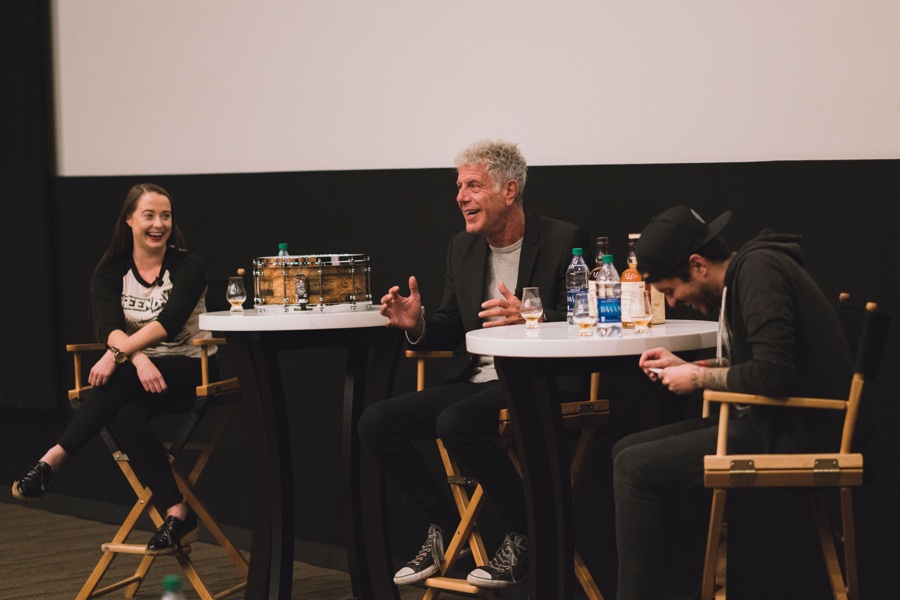 Photo courtesy of The Balvenie

Anthony Bourdain is totally uncomfortable with the fact that he is beloved. He’d rather eat tongue than bite his, and throughout his career, he has unabashedly spoken his mind, even flinging insults at other celebrity chefs with seemingly zero regard for the consequences. And yet, people lined up and freaked out everywhere he went in Boston while promoting his new online video series, Raw Craft.

So how has this sharp-talking, ex-chef, ex-junkie, cocky guys’ guy become an idol to so many, and not just another name on the growing list of men behaving indefensibly? How in the world has Anthony Bourdain come out unscathed?

As I ask him that very question, he looks even more uncomfortable than when I was singing his praises.

“Look, there was a period in my life when I was a bully. I was an equal opportunity bully, but I was unhappy and I made everybody around me unhappy,” he says. “When I was a chef, I wanted the food to arrive at the table when it was hot and I wanted the position numbers to be right and if they weren’t, I would rail at the heavens in a histrionic way. I was witheringly sarcastic. Somebody wrote recently about power imbalance and said that when you’re in a position of power, all it really takes is a sideways glance to ruin someone’s week, and I’m sure I ruined a lot of people’s weeks, so I’m not innocent.”

OK, ruining an employee’s week is one thing when you’re a miserable chef. But it would be quite another to take advantage of a power imbalance in a way that ruins a woman’s life.

How is it that in both worlds Bourdain has inhabited, the typically misogynist industries of restaurants and Hollywood, he emerged more a champion of women than an assailant?

“I came out of an era that was a jocks-or-freaks situation in high school,” Bourdain explains. “People that talked about women in a negative way, well, the jocks did that and it was never cool to be that kind of an asshole. I think the record will show that I have been casually cruel to famous women who I’ve never met. One of the things that I’ve become aware of is how completely ignorant I am to people’s private pain. You can never know what kind of pain or shame people are walking around with. I think about some of the things I’ve said about Paula Deen, for example, and I wouldn’t do that now… I’ve crossed the line, I have. I grew up with a good vocabulary and I have used it recklessly at times for the short amusement of the people around me.”

And there it is. One reason Bourdain continues to be revered is that despite his fame, success, and his legions of fans, he just seems so damn human.

How has he managed to hold on to that authenticity and not let his head grow so big that it carries him to a make-believe place where he doesn’t have to apologize or express regret? He says he likes to think his parents raised him right, but when pressed, Bourdain continues, “I learned very quickly that I was depicted as a certain kind of person; the guy in the leather jacket with an earring and a cigarette hanging out of his mouth. I was happy to go along with it for a brief period of time, but I never took it seriously. That leather jacket could’ve been my funeral shroud and that would be some pretty tragic shit today. It’s just having a reasonable idea of who you’re looking at when you’re looking in the mirror.”

That humbleness is another trait that makes Bourdain lovable. He has always been straightforward about his former life as a chef, clarifying that it is hard, hard work—a craft and not an art. Of all of the chefs he admires, he points to Ferran Adria, as one who is an artist, “a true visionary.”

On Raw Craft, Bourdain travels the country and interviews other craftspeople that are so dedicated to their work, it’s almost fetishized. There’s a metalsmith in North Carolina, a cobbler in Los Angeles, and the guys behind SJC Drums, based in nearby Southbridge. So what’s the difference between an artist and a craftsperson, in Bourdain’s opinion?

“The people who designed the great cathedrals in Europe, those were artists and the people who built them were the craftspeople… I think art should provoke. If it makes me cry or makes me angry or confused… I’m pretty sure that’s art. I wish I could do that, although the artists I know pay a terrible price for that kind of state of grace,” he says.

I couldn’t let Bourdain go without asking him the obligatory question about Boston’s food scene. What does he think of it? “I’ve loved this city since I started coming here when I was 17 years old… I know of some really great chefs who are doing really great work here, but I’m not about fine dining and [my shows haven’t] been about fine dining for a long time. For me, the great joys of eating in Massachusetts are eating the old-school stuff like great chowder, a piece of grilled bluefish, quahogs, steamers, the Azorean cuisine, the things I grew up with and learned to love when I was on Cape Cod. If there is someone doing something awesome with pork belly at Uni, which of course there is, I’m not the guy to highlight it,” he says.

But he will highlight Provincetown, the seaside community that first introduced him to life in the restaurant industry. Bourdain says that he hasn’t been back since he filmed an episode of Parts Unknown there in 2014, but “it’s a very emotional place for me,” he says. “I came of age there in the early ’70s in a very magical, golden, naïve time that I don’t think we’ll see the likes of again.”

Speaking about Provincetown makes Bourdain pause for a minute.

“You asked me earlier what informed me as a person and as a chef,” he says. “And I will say being in Provincetown when I was 17… it was predominantly gay, as it still is. It was a time in history of boundless optimism when we really thought anything was possible. I think of the people I lived with and worked with and who befriended me then… whatever value system I learned then informed what came later. That’s where it all started for me. Those were the kitchens that formed my expectations. I thought it was going to be like that forever.”

The final reason that we love Bourdain so much is that he really loves us. Well, all but one of us. There is a certain local chef who took to the airwaves several years ago, calling Bourdain out for his lack of restaurant coverage when he visited Boston. Bourdain doesn’t name him, but he does remember it. “He basically went on a radio show and said that in defense of Boston’s honor he’d gone up to me at a food and wine festival and punched me in the face. I’ve never met this little munchkin. If he came up to me and punched me with his tiny, little fists, that’s the sort of thing I would remember,” Bourdain says as he gets up to shake my hand.

Throwing barbs on his way out the door, as he goes to greet his adoring fans—who would expect anything else?