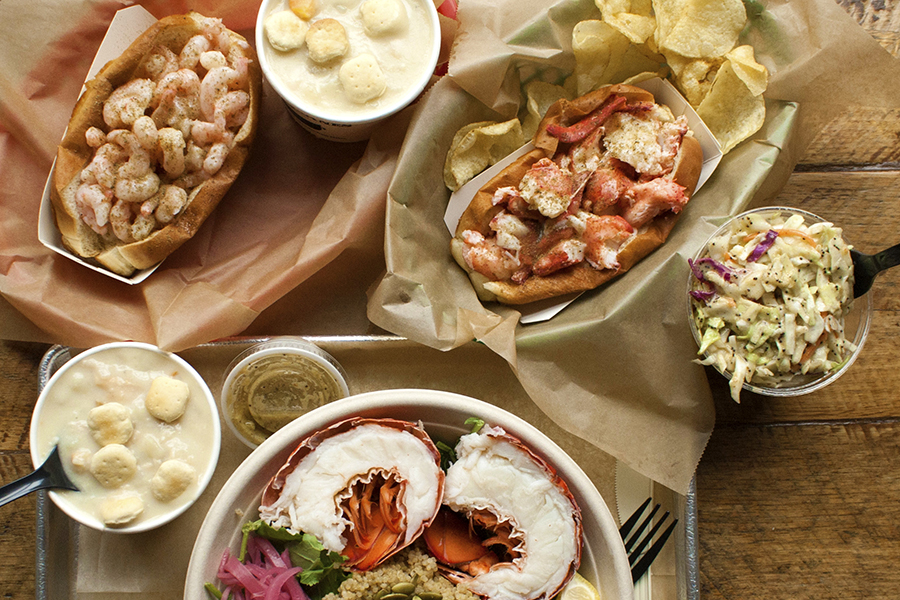 A spread at Luke’s Lobster, much like what you could eat at the new Seaport restaurant later this month. / Photo provided

Need a holiday gift for a seafood lovers? Consider the lobster… calendar. Luke’s Lobster, which will have three Boston locations when its latest debuts at One Seaport on Wednesday, Nov. 29, introduces a new, monthly register to celebrate its third location. Available this season at all Luke’s locations, the $20 calendar is an education tool and fundraiser for the Maine Lobstermen’s Community Alliance.

The 2018 calendar is Lobster Ladies-themed, with a look at some of the women who are boat captains, cooks, scientists, or otherwise involved in the sustainable lobstering industry in Maine.

“For the inaugural year, we all thought hard about what our focus should be. Having spent my whole life in the world of lobster, I know first-hand that women are the unsung heroes of the industry, and we couldn’t be prouder to honor them this way,” cofounder Luke Holden said in a press release.

All proceeds from the calendars go to the MLCA and its mission to educate the public about Maine’s lobstering heritage, support scientific research to further the industry’s conservation practices and ocean stewardship, and provide charity to distressed fishing families.

Luke’s is a fast-casual restaurant chain started in New York City eight years ago by Holden, a Maine native and one-time lobsterman, and Ben Conniff. The company has grown to include more than 25 locations in eight states, an international partnership in Japan, and a sister company called Cape Seafood, which hand-selects and packages fresh catches along the Northeastern coast especially for Luke’s shacks.

Get to know some of the people in this traceable food chain through the Lobster Ladies calendar—and meet them in person at the Seaport Luke’s on opening day. A few of the featured women, as well as Holden and Conniff, will be on hand from noon-4 p.m. on November 29. Luke’s is open that day, and going forward, from 11 a.m.-9 p.m.

The 20-seat Seaport shop has Luke’s typical nautical decor, including decorative ropes, buoys, and framed photos of its seafood purveyors. The tables were actually made from southern yellow pine that was salvaged from the factories formerly in the area. The menu is the same as other Luke’s, including the $18, quarter-pound, Maine-style lobster roll; a shrimp roll, and crab roll, which all have gluten-free options; the Wild Blue arugula salad, chowder, and lobster bisque; and winter specials, like a lobster grilled cheese, and lobster mac and cheese.

Luke’s joins the new flagship location of Tuscan Kitchen, which opens today; Scorpion Bar, Kings Dining and Entertainment, a deli from Better Bagels, a new Sweetgreen, and more at One Seaport. The 23-acre development is the largest mixed-use project in Boston in more than 30 years, bringing more than 72,000 square feet of new dining space beneath shiny new residences at the Benjamin and Via.