And in other Somerville grocery store news, the Compliments Food Truck founder is bringing a new concept to Bow Market. 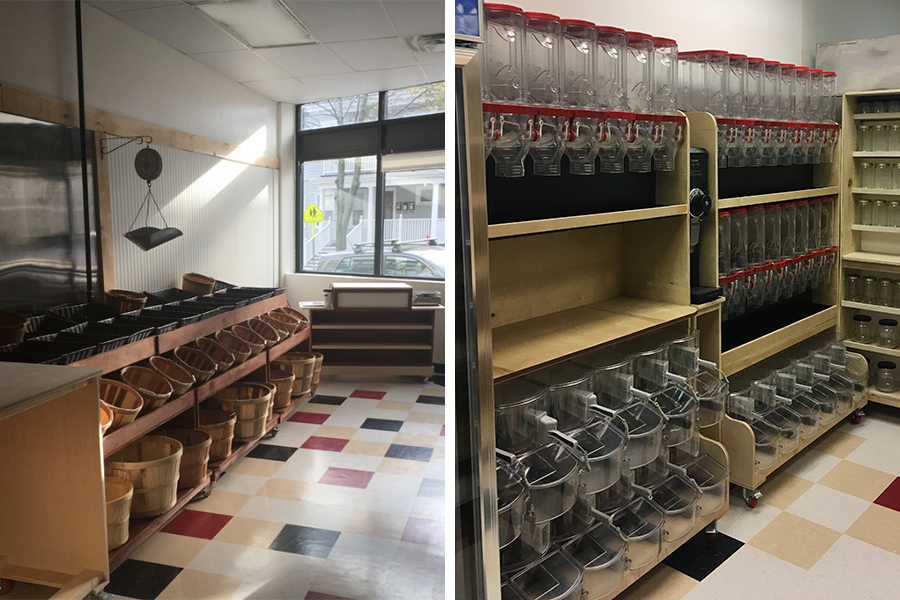 The startup grocery concept is from Matt Gray, a Winter Hill Resident and food access proponent, and former donations manager at the Greater Boston Food Bank. Gray and his wife, Heather, piloted their idea for a produce-centered, small-format grocery store for the past year at markets around Winter Hill. The idea was to make it as easy to pick up fresh, healthy staples, including local produce, with the same ease and convenience as picking up a bag of chips and a 20-ounce soda.

“There’s a convenience store on every corner, but never a store where you can get fresh produce and your basics,” as Gray explained it to Boston.

The focus of the stock is B-grade produce, like scarred apples, pockmarked peppers, onions, sweet potatoes, and lemons that wouldn’t sell on a conventional shelf; conventional bananas, avocados, and other popular fruits; and locally grown items as well. Neighborhood Produce also has gravity bins full of pastas, grains, nuts, and other bulk products, and a small selection of quality dairy and meats.

In other Somerville grocery news, the founder of the Compliments Food Truck will be bringing a small, natural grocery store to Bow Market. Local food entrepreneur Bobby MacLean is the latest to sign a lease at the forthcoming Union Square development, and in fact he’s taking over two of the ~165-square foot bays, he reports.

“The focus will be on small batch local producers and seasonal produce,” Maclean says, as well as prepared food made in-house.

“Think truckloads of farm-fresh produce coming through the front door every morning and getting divvied up between salads, soups, smoothies, and shelves of the grocery store,” he says. “The store will be a spot for Union Square residents to pick up organic, local staples, like milk and eggs, and we will also have a selection of options for alternative diets like gluten-free and vegan.”

Stay tuned for more on this yet-unnamed concept from Maclean. Bow Market is on track to open spring 2018.

Neighborhood Produce opens from 8 a.m.-8 p.m. both Tuesday and Wednesday this week, though it will typically be closed on Tuesdays. It will be closed on Thanksgiving, then regular hours continue “for the next 1,000 years or so” beginning Friday, Gray says in a press release. The lights are on 8 a.m.-8 p.m. Mondays, Wednesdays, Thursdays, and Fridays; 9 a.m.-7 pm. on Saturdays, and Sundays from 10 a.m.-7 p.m.