Meet the resident cats of Purr this weekend in Brighton. 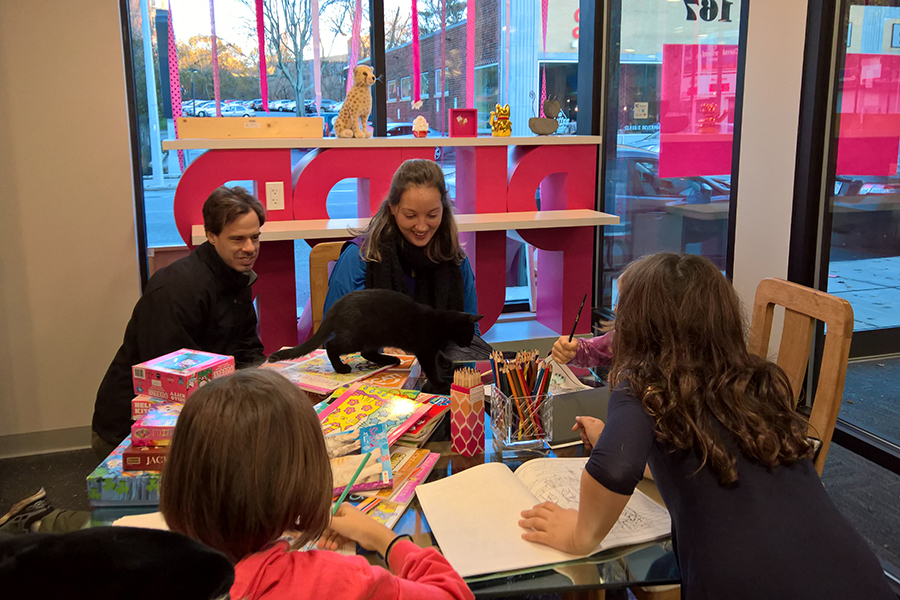 If your Black Friday and Small Business Saturday shopping needs more kitten cuddles, head to Brighton. You won’t be able to come home with a new pet for the holidays, but Boston’s first cat cafe is finally open regular hours, with five resident cats to play with.

After more than a year of excitement and anticipation—then several months of confusing drama that largely unfolded on Purr’s Facebook page—Purr Cat Cafe opened the doors for business on Saturday, Nov. 18.

Owner Diane Kelly knows many people may not want to see Purr Cat Cafe succeed after “my mistakes on social media. I’ve been very emotional and reactive,” she says. “I learned an enormous lesson and I’m trying to do a better job. Truly, I want Purr to be a great place for the community as well as cats.”

The City of Boston Inspectional Services department cleared Purr of any alleged animal cruelty after a visit with Kelly at the space last Thursday afternoon, says commissioner William “Buddy” Christopher. His Animal Control division received at least six emails and calls to the city’s 311 line with concerns about Purr Cat Cafe between September 22 and November 14, according to emails provided by the Inspectional Services Department. Whenever a complaint is lodged (even a far-fetched one), either online or formally through 311, it prompts the department to investigate, Christopher says. That visit was in addition to the compulsory Animal Control inspection a business like Purr would be subject to normally. Kelly passed both on Thursday, he says.

“I myself went there Saturday morning around 11 o’clock to do a final walkthrough, as I commonly do, just to make sure I was comfortable with everything,” Christopher adds. “I was. She cannot do adoptions right now. She brought her own cats in so people can have the experience of being with cats. As far as our regulatory process is concerned, she’s all set.”

While the venture has billed itself as a place to find felines their forever homes, Kelly has not finalized an adoption partner. She has changed her business model for now, she says. Kelly has personally adopted five cats, including three kittens, who live full-time at Purr, and she’s currently accepting reservations to hang out with them for $15 an hour. Walk-ins are also welcome, when Purr is not at its 40-person capacity. Kelly hopes to adopt up to seven more cats to live at Purr in the coming weeks, she says.

The space is stocked with cat toys, coloring books, and board games for humans to pass the time, and Kelly is working on installing free Wifi, she says. She plans to ramp up programming, like cat-themed movie nights, yoga classes, speed dating sessions, artist-led paint nights, children’s story hour, and more in the coming months.

“Starting out, it makes more sense to get up and running, have people come in and play with cats, then introduce events. As we become operationally efficient, we’ll move into a model where we partner with a rescue” so Purr can house adoptable cats, Kelly says.

Part of the reason is because Purr Cat Cafe needs to start making money, she says. An Indigogo campaign for Purr raised “close to $7,000” in 60 days, Kelly says, which she has used for the building’s rent.

“We had been delayed in responding to the perks [for people who supported the crowdfunding effort], but we will be committing to those perks,” she says.

Another reason for the slow rollout is because Kelly is currently the only employee. Purr doesn’t offer food just yet. The City of Boston’s sanitary codes forbids food prep around animals, so the compromise was for Purr to strike a deal with a local coffee shop and have orders delivered, Christopher says. Guests cannot bring in their own food. Kelly says she plans to have future staffers pick up guests’ food orders. When that happens, Purr will have menus out for nearby spots Fuel America, Gyro City, and Little Pizza King.

The regulatory setup of Boston’s first cat cafe was developed as Inspectional Services worked with Kelly on her specific plan over the past year-plus, Christopher says. “The mayor likes the idea of new, innovative businesses, and people being entrepreneurial. We figure out how to work with them,” he says. “We didn’t quite know how to approach [permitting a cat cafe] when she first asked. We had to do our due diligence, we defined the path she could take.”

Christopher says he was aware of the drama surrounding Purr on Facebook; his department regularly monitors social media, he says. But Animal Control Director Amanda Kennedy found nothing to be alarmed about during her inspection, providing Purr does not attempt to orchestrate adoptions yet. As Purr ramps up business, Inspectional Services will continue to keep an eye on it, he says.

And he’s excited to see what happens. “We dug into our codes to figure out what road she had to go down to have success, and we really want people to have success,” Christopher says. And if any future entrepreneurs want to try to open their own cat cafe, his department wants to help them, too.

“We would follow the same protocol we do with everybody. If you have a restaurant that’s been shut down for a critical violation, it doesn’t affect how we look at other restaurants. Everything is case-by-case. Our job is to provide advice, but it’s ultimately the applicant’s position what kind of business platform they’re trying to build,” he says.