Look Inside Fat Baby, Opening This Weekend in South Boston

The sushi and cocktail bar is the latest from the team behind Loco Taqueria. 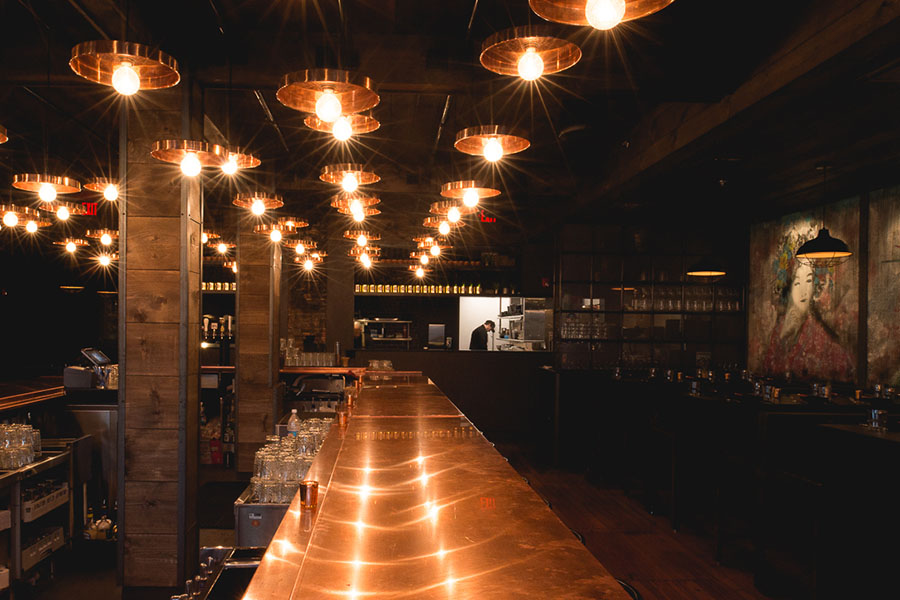 One of the perks of owning a popular neighborhood bar like Loco Taqueria & Oyster Bar is that maybe, one day, one of your regulars will host you on a trip to Southeast Asia. Such was the case for Loco owner Mike Shaw, who visited Hong Kong, Bangkok, and Ho Chi Minh City recently with a frequent Loco guest who happens to be from the area.

“The last place we went, it was the most unique place in Ho Chi Minh City,” Shaw recalls. “All these beautiful plates, the freshest food, really cold beer, a great space. It was super simple, how awesome it was. We said, ‘If a place like this doesn’t exist in our neighborhood in the next couple years, we’re not doing our job.'”

On Saturday, Dec. 2, Fat Baby opens to the public. It’s Shaw’s homage to the East Asian food and bar culture he loves, and it’s just around the corner from Loco Taqueria.

In addition to snacks like chicken banh mi bao, pork dumplings with lemongrass and Szechuan sauce, crab Rangoons wrapped taquito-style, as a nod to Loco; and Thai peanut salad, Fat Baby has a few noodle bowls, and a robust selection of fresh nigiri, sashimi, and maki rolls. Cocktails, like a classic Singapore sling, the 8 P.M. Taco (tequila, lime, lychee, apple-cranberry reduction), and a sake sangria join a handful of draft beers, and a selection of eight sakes by-the-glass. 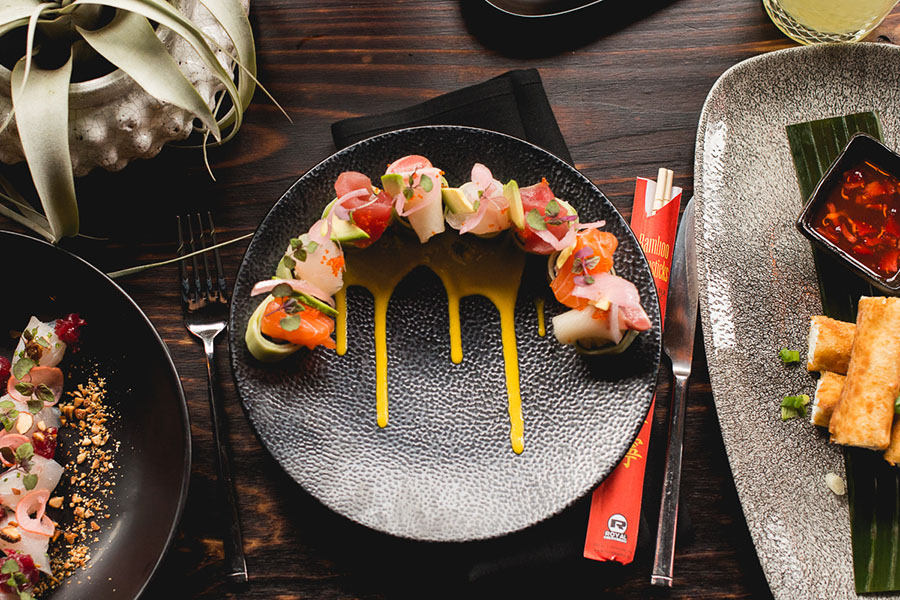 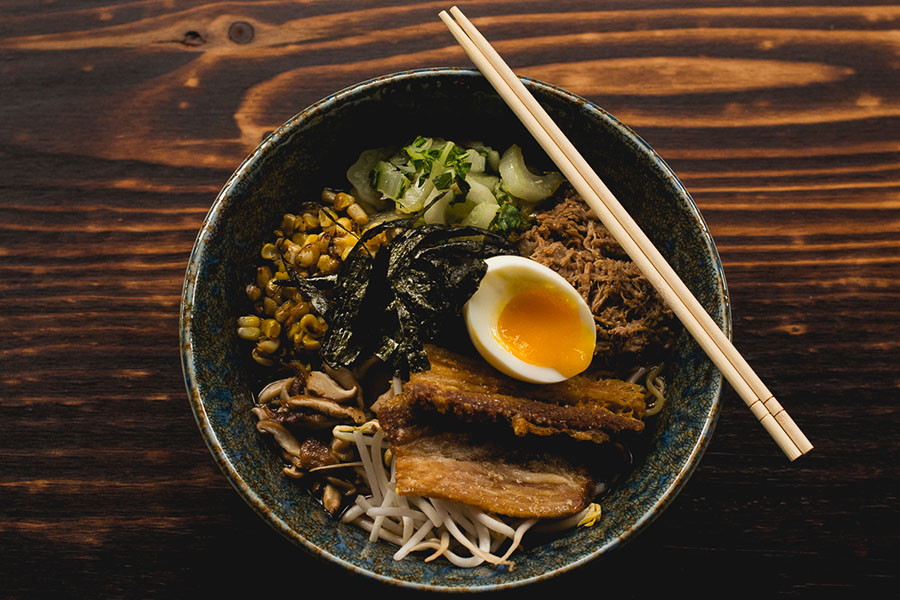 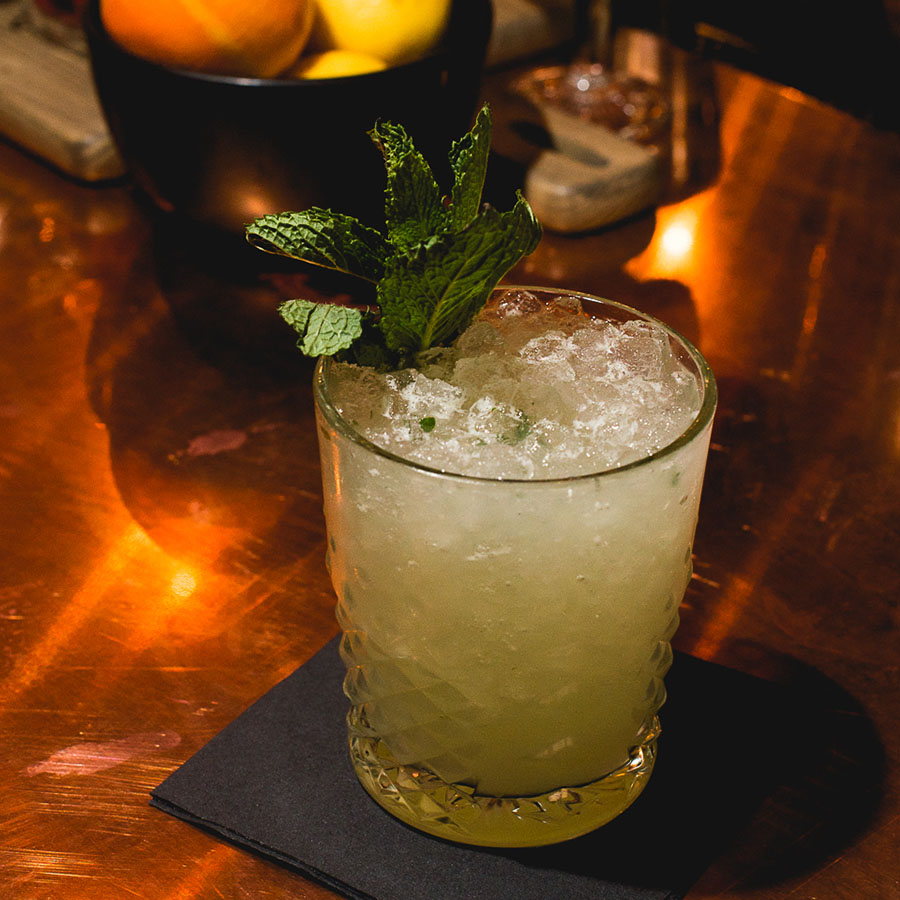 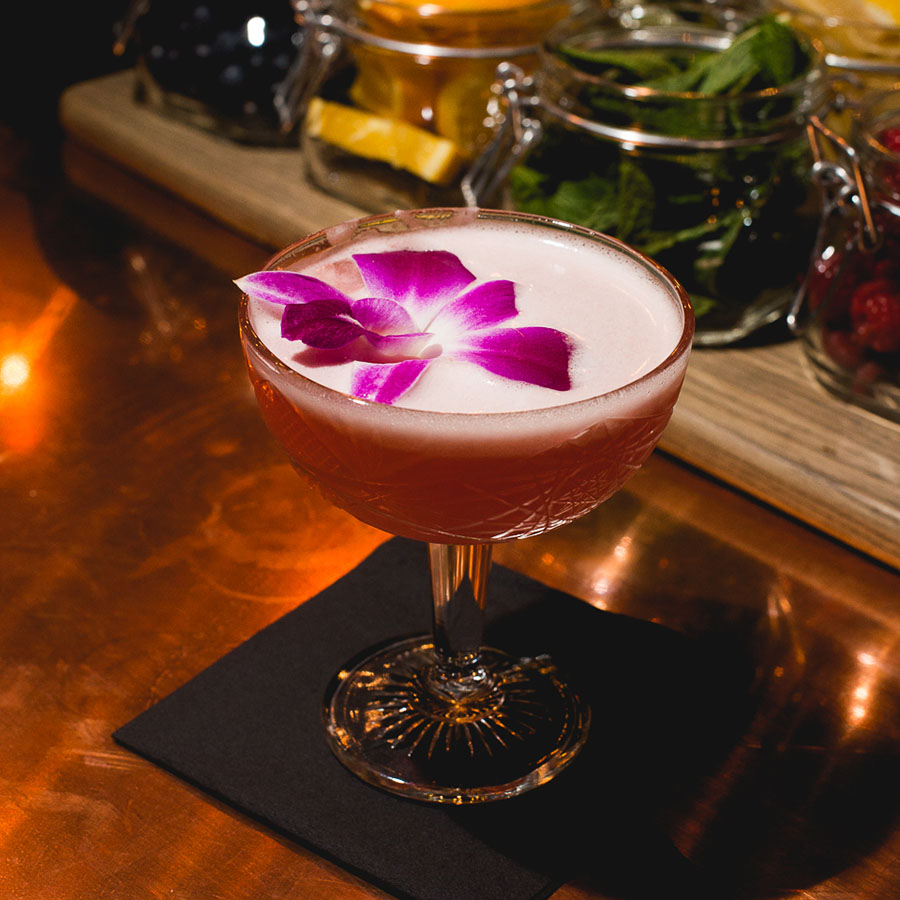 Though Shaw, a career bartender who spent a few years at Whiskey Priest and Lincoln Tavern before joining Lincoln owners Eric Aulenback and Michael Conlon to develop Loco, did not visit Japan, his regulars back in Boston implored him to incorporate sushi in the pan-Asian concept he was developing. “We’re so fortunate to be able to provide something that our neighborhood wants,” Shaw says.

Loco executive chef Matt Drummond is also overseeing the Fat Baby kitchen. He hired Kegan Stritchko, a young sushi chef who was most recently on the line at Uni, and chef de cuisine Danielle Dorcil, whom Drummond worked with at the Colonnade Hotel. Loco’s general manager, Rachel Titcomb, is also overseeing the front-of-house at Fat Baby.

“It’s so awesome and unique to have a neighborhood so supportive that we can build new business 300 yards from each other. The opportunity that provides for our [employees] is really special,” Shaw says. 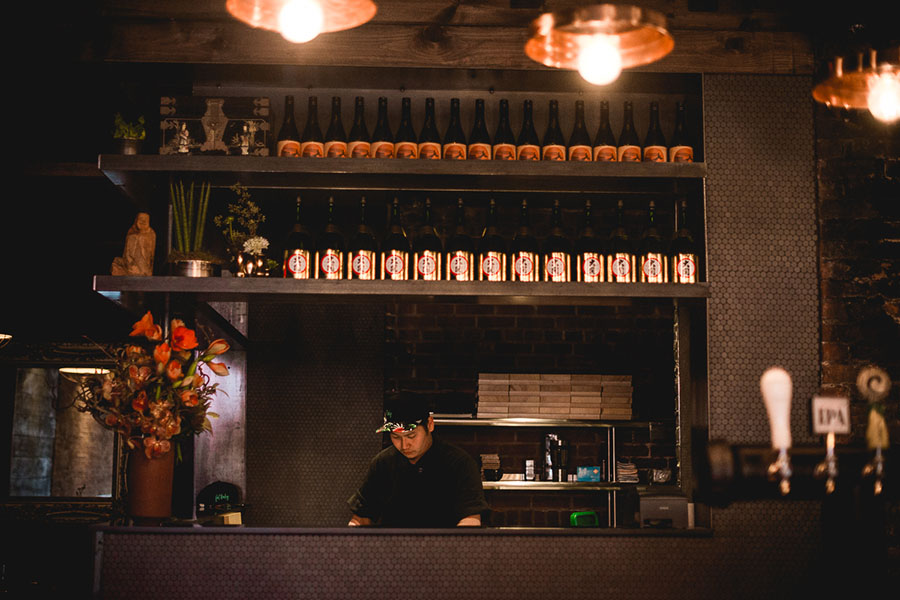 The sushi bar at Fat Baby. / Photos by Toan Trinh 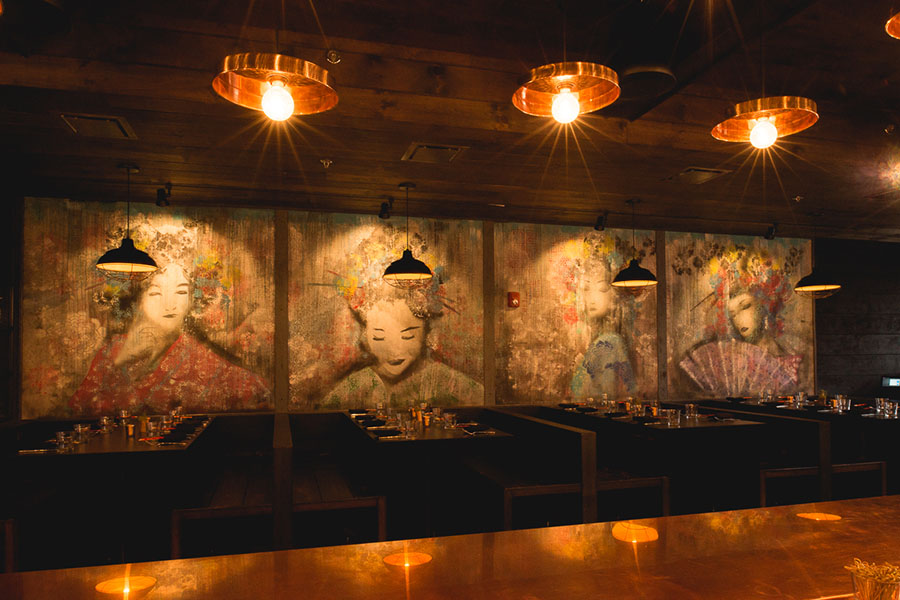 The physical space of Fat Baby also recalls its sister cantina, with exposed brick, rustic woods, and a twinkling, gigantic, rectangular bar anchoring the space. Formerly Salsa’s, it’s unrecognizable from its predecessor—the Fat Baby team tore down a couple walls and nearly doubled the capacity to 100 seats, with 30 at the bar. A few columns—hiding utilities for the apartments above—interrupt the flow behind the copper bar, and at first were an impediment to the design envisioned by C & J Katz. But part of the reason Shaw and his partners love South Boston is for its old buildings, and the idiosyncrasies “started as a frustration for us, [but] now it brings so much character and depth to the room.”

Like Loco, Fat Baby has a variety of seating options—high-top tables in the front of the room can seat large groups, a common occurrence in the Southie dining scene, or smaller parties separated by fresh floral arrangements from Market Studio’s Jen Allen. Booths beneath a series of geisha murals painted by local artist Mark Grundig can tuck in up to eight people. On the other side of the room, regular-height two-tops can be moved to accomodate any-size party, and there’s a more formal, 12-seat table in a nook in the back of the room.

But the most inimitable design element? You’ll have to pop into the restrooms for that. The facilities are plastered with hundreds of black-and-white photos of, well, fat babies. Most of the pictures feature Loco and Fat Baby employees, though Jay-Z, NHL Rangers center Kevin Hayes (a Dorchester native), and other celebs may be recognizable to a discerning eye. 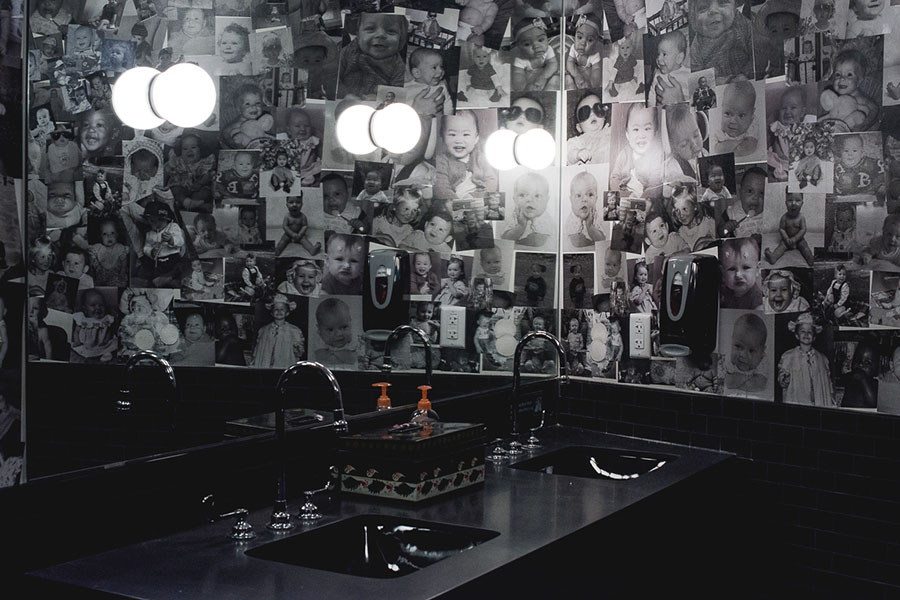 A bathroom at Fat Baby. / Photos by Toan Trinh

The name “Fat Baby” doesn’t come from the logo for the famous Japanese brand Kewpie Mayo or anything like that. It started as a silly working title that the staff used because it is actually the team’s widest, and smallest restaurant. “We tried to come up with a story that would be cooler than [that],” Shaw says, but it’s the truth. And hey—it lends itself well to branding, he adds, laughing, and handing over his business card with his own baby photo on the back.

Fat Baby opens Saturday at 5 p.m., and serves dinner and drinks nightly thereafter. The kitchen is open 5-10 p.m. Sunday-Wednesday, and until 11 p.m. Thursday-Saturday. It does not accept reservations. The bar stays open until 1 a.m. Stay tuned on Instagram and Facebook for news about lunch and brunch starting down the line. 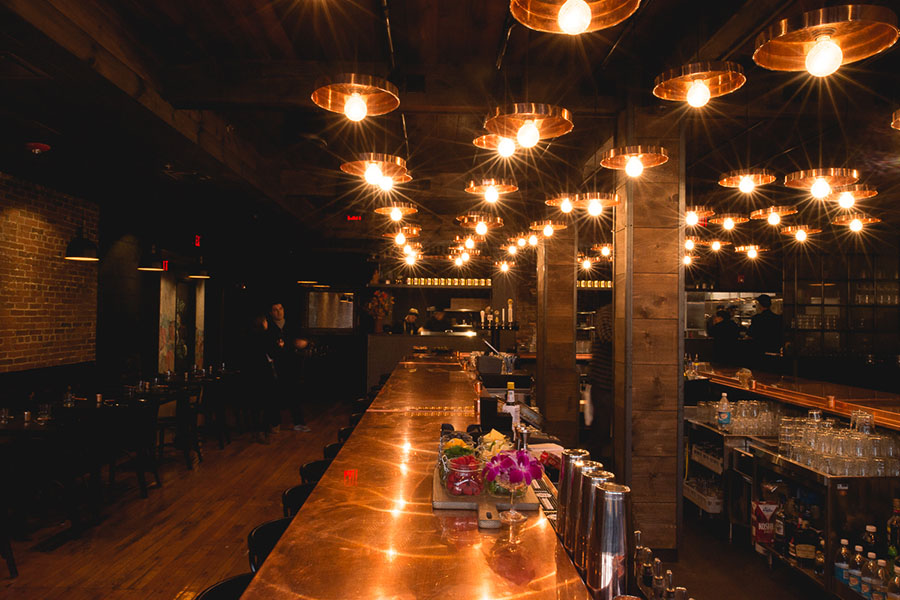 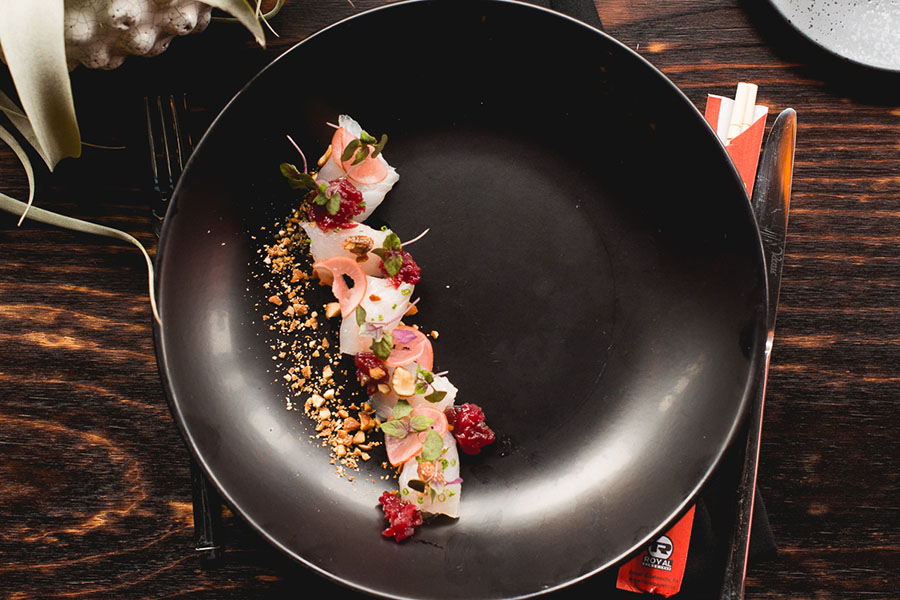 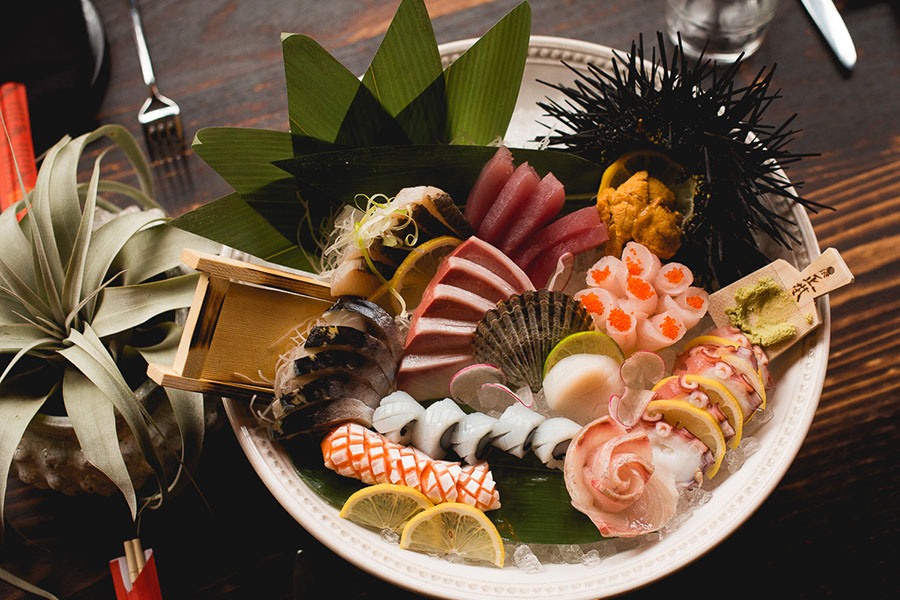 A sashimi platter at Fat Baby. / Photos by Toan Trinh