The group of low-wage workers say they were subjected to lewd comments and groping at the Faneuil Hall restaurant. 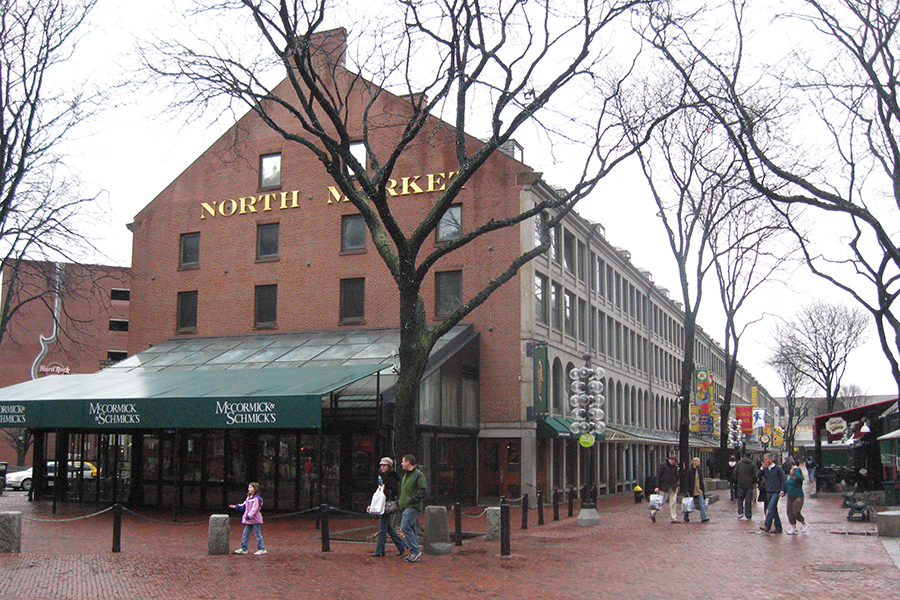 This post has been updated with a statement from McCormick & Schmick’s.

National restaurant chain McCormick & Schmick’s is the subject of a sexual harassment lawsuit filed today. A group of female workers allege managers and other employees at the Faneuil Hall location made lewd comments and touched them inappropriately while they were on the job.

The five women—Marta Romero, Fabiana Santos, Gladys Fuentes, Santiago Cruz, and Milagro Alvarez—worked (and in one case, work) in low-wage positions: dishwashers, prep cooks, and janitors. Four of the women were previously employed at McCormick & Schmick’s, while one continues to be employed there.

The women conducted a press conference this afternoon at the Lawyers’ Committee for Civil Rights and Economic Justice offices in downtown Boston, which, along with Fair Work P.C., filed the lawsuit on behalf of the aggrieved employees.

In the lawsuit, the women describe many vile incidents perpetrated by managers and other male coworkers, including executive chef Aaron Hopp; sous chef Roman Buruca; and dishwasher Jesus Vasquez. Some of the incidents, which took place in 2014 and 2015, describe Hopp grabbing his crotch and telling one of the women, “This is your food;” Buruca groping a woman in a walk-in cooler; and Vasquez pinning a women against a table with his groin in her back. The lawsuit details additional groping, and numerous graphic conversations, including explicit comments about oral sex.

The women took their complaints to general manager David Wilson and McCormick & Schmick’s human resources department in July 2015, which found that a former general manager, Barry Young, failed to notify HR about an earlier complaint. While the company terminated the dishwasher, and suspended the sous chef for one week without pay, according to the lawsuit McCormick & Schmick’s said it “considered that Mr. Hopp is in his mid-twenties, and that several of the complaining employees were nearly 25 years older than Mr. Hopp. While the allegations are certainly plausible, in weighing the evidence, the likelihood that Mr. Hopp interacted with the Complainant(s) in a way that was intended to offend them in a sexual manner did not seem credible.”

McCormick and Schmick’s strives to maintain a harassment free environment. When harassment of any type is reported, we take matters seriously and immediately investigate, resulting in swift, appropriate action. This case is no exception. Like most companies, we are not immune from bad characters. Well over two years ago when this matter was first reported in 2015, after a thorough investigation, an offending employee was immediately terminated, among other disciplinary actions. Although the [federal Equal Employment Opportunity Commission] and the Massachusetts Commission Against Discrimination both declined to prosecute this matter, the plaintiffs’ lawyers have latched on to the current frenzy concerning sexual harassment and filed a lawsuit citing inflammatory allegations that conflicted with statements of their own clients and that at least one independent eyewitness identified during our investigation said was untrue. We are confident that after we were put on notice, we did all we could to restore the work place to a harassment free environment and that we will prevail in the litigation.

In the lawsuit, the women say that the Massachusetts Commission Against Discrimination and the U.S. Equal Employment Opportunity Commission determined the women had a case against their employer based on their gender.

Plantiff Fuentes said the harassment she endured has made her feel humiliated. “When I get home, all I can do is think about what has happened. I cry a lot. I cannot sleep at night,” she said in a press release.

Fellow plaintiff Cruz added, “I feel like I am being treated like a prostitute, when I am a mother and I deserve respect.”

“In the flood of recent stories of sexual misconduct in white-collar industries, it is easy to overlook the most vulnerable women,”—such as cleaners, dishwashers, and prep cooks, said attorney Sophia Hall of the Lawyers’ Committee.

Fair Work P.C. attorney Rachel Smit said, “This lawsuit serves as a warning to all employers—including those that employ workers in lower-wage jobs—that cases of sexual harassment may well result in legal action.”

The five women are seeking damages for their emotional distress, punitive damages, and other relief.