The Wild Turkeys of Brookline Are Apparently in a Band, and You Can Buy Their Merch at Cutty’s

The exclusive T-shirt is designed by Boston artists. 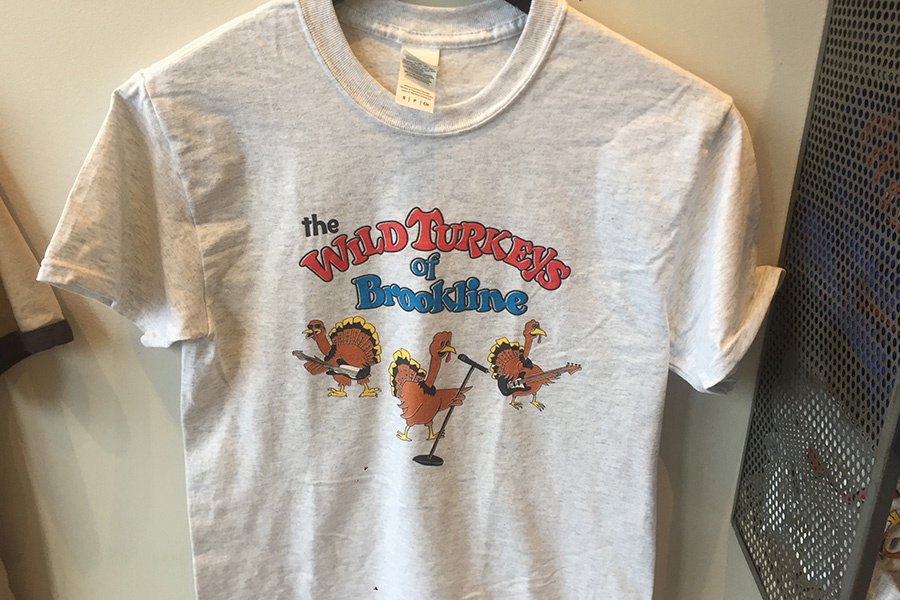 The Wild Turkeys of Brookline T-shirt is exclusively available at Cutty’s. / Photo provided by Cutty’s

Aerosmith, Pixies, Pile… the Wild Turkeys of Brookline? A new T-shirt on the rack at Cutty’s Foods imagines the next great entrant into Boston’s pantheon of rock royalty.

Those infamous feathered fowl that have prowled our urban areas without fear since at least 2012 have been immortalized as the Wild Turkeys of Brookline on the exclusive garment. The guitar-led, presumably rock-driven, three-piece outfit is an original work by Boston artists Pat Falco and Kenji Nakayama, done in a kitschy style reminiscent of the California Raisins.

The Brookline turkeys are, unsurprisingly, a frequent topic of conversation at the Brookline Village sandwich shop. (It seems worth noting, for the record, that Cutty’s uses Plainville Farms all-natural turkey on its popular Turkey 1000 sandwich.) Friends of Cutty’s owner Rachel Kelsey’s, who prefer to remain anonymous, are behind the Instagram account @thewildturkeysofbrookline, and it was their idea to commission a T-shirt by the local artists, Kelsey says.

The Wild Turkeys of Brookline shirts just went up for sale on Friday, and she estimates Cutty’s has sold about 10 so far. There are plenty left—along with Cutty’s new blue-and-orange design, and ringer Ts featuring Kyle Fiasconaro’s Brewers Crackers logo—in sizes small through extra-large, and they’re $20 each. “They’re hilarious,” Kelsey says.

And relatable. Kelsey, who lives in Cambridge, recently started @wildturkeysofcambridge with her husband and business partner, Charles Kelsey.

Brookline Police Department animal control officer David Cheung advises not siccing your dog on these fearless fowl on the prowl, so if you can’t beat ’em, might as well join the band.