An All-Vegetarian Saus Will Open in Somerville

The beloved fries, sauces, beer, and cider will take center stage at this Bow Market location. 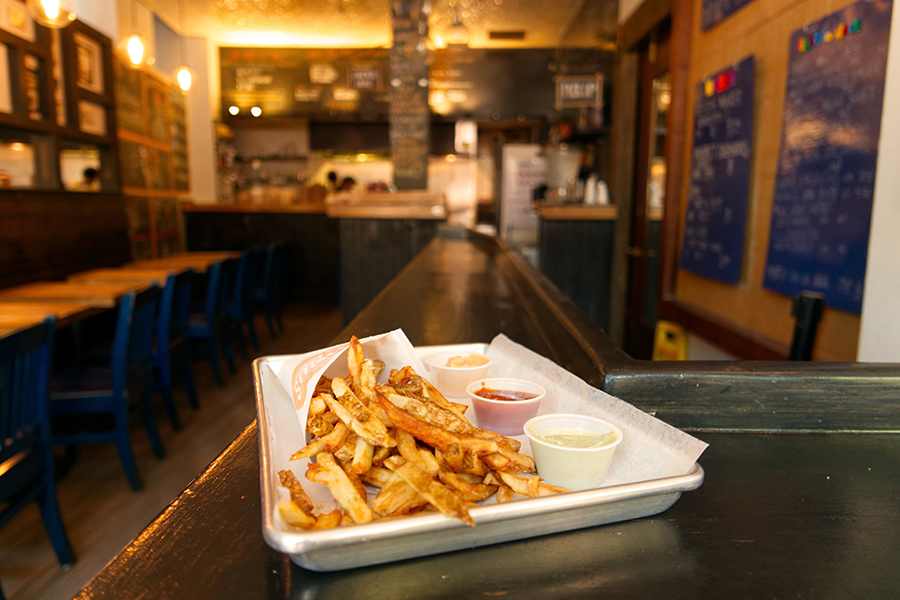 The beloved fries will be on the menu at the vegetarian Saus in Somerville. / Photo provided

A Faneuil Hall favorite is taking its talents across the river to an exciting new development in Somerville. Saus will open a second location at Bow Market—but with a twist. The frites pros are making everything vegetarian-friendly.

Owners Renee Eliah, Chin Kuo, and Tanya Walker were brainstorming ways they could slim down their menu to fit inside the small square footage of the food-and-maker market, a converted storage warehouse with about 30 small-scale stalls. Saus is taking over a larger, corner space that’s 530 square feet, says Bow Market founder Matthew Boyes-Watson, as well as a 165-square foot bay next door. So it will have one of the largest footprints at Bow Market, along with Remnant Brewing and the Comedy Studio.

But it still lacks the prep area Saus has with its basement kitchen in Boston. While they were thinking of ways to solve the space problem, Eliah and some of her staff have simultaneously been exploring meat-free diets themselves, she says.

“As plant-based eating has gained more prominence in our general dining culture… it felt like the right time to experiment with a meat-free version of Saus,” she says.

Of course, the twice-friend Idaho russets, and the range of house-made sauces for dipping; plus miso-mushroom-gravy-and-cheddar-curd-topped poutine will be there. The Somerville Saus will also have salads and sandwiches, plus beer and cider. But the menu is still in the works.

“This has been an exciting creative challenge for [chef] Chin, who has been expanding his vegetarian repertoire at home and for OG Saus, which will remain an omnivorous restaurant,” Eliah says.

Bow Market is currently under construction, eyeing a spring 2018 opening. Along with Saus, Remnant Brewing, and the Comedy Studio, it will be home to local jewelry and other makers; plus an extremely Massachusetts concept from the owners of Mike & Patty’s, a storefront for the pebre-and-empanada-born Buenas, a cultural dining experience from a Filipino chef, Hooked Fish Shop, a chocolaterie, a natural foods market, and more.