The Bacon Truck Will Open a Restaurant in Charlestown

The food truck favorites are going brick-and-mortar in 2018. 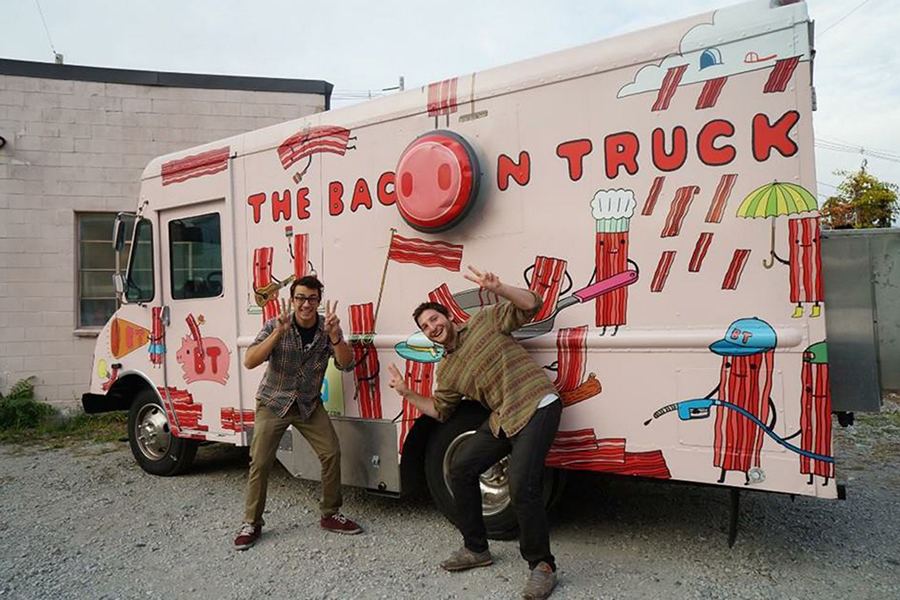 This post was updated at 12 p.m. with new details from owner Sam Williams.

If one of your New Year’s resolutions is to eat more bacon, we have some great news for you. Beloved mobile munchies-makers the Bacon Truck will be setting up shop full-time in Charlestown this year. The combination commissary kitchen and café will open this winter, with hours and offerings ramping up as the months get warmer, says cofounder Sam Williams.

Williams and J.J. Frosk launched the swine-bedecked vehicle and a menu of bacon-filled sandwiches, sides, and sweets (candied bacon strips, anyone?) in 2013, out of a South Boston commissary kitchen. Since then, the Bacon Truck has been a regular among the Greenway’s food trucks, at SoWa, at Aeronaut’s Allston neighborhood nights, and elsewhere around Boston.

For the past couple years, the owners have considered launching a second truck, which would require a larger home base kitchen operation, Williams says. Simultaneously, the bacon-loving partners have also wanted to expand their menu. The Charlestown location will eventually allow them to achieve both goals.

Formerly a short-lived restaurant called Prescott, the property is in an industrial area with ample loading space—a food truck necessity. At nearly 1,700 square feet, it nearly doubles the amount of space the Bacon Truck currently operates out of, and has an area that will become outdoor seating once the weather warms up. The building itself doesn’t need much work to become the Bacon Truck café, Williams says. He expects to have about 20 seats inside, and eventually, about 20 outside as well.

The counter-service operation will focus on breakfast and lunch. In addition to sandwiches like the Pork & Mindy, the Hangover, a turkey melt, and more favorites, the lunch menu will offer the Bacon Truck’s house-ground bacon-brisket burger that is a frequent special, as well as mac and cheese bites, French fries, and tater tots. Alongside hot and cold Fazenda Coffee (and a house specialty Nutella iced coffee, a go-to food truck staff treat), breakfast items might include a bagel with bacon-scallion cream cheese, and a breakfast burrito.

“It’s going to be fast-casual, grab-and-go stuff,” Williams says. “It’s going to be a great fit for Charlestown, because the [dining] offerings can be limited. There are nice sit-down restaurants like Monument and Brewer’s Fork, but there’s not a ton of in-the-middle stuff.”

As the Bacon Truck’s name suggests, most menu items feature thick-cut, applewood-smoked pork from Blackstone Smokehouse in Newmarket Square. Habanero-garlic pickles are the only non-baconed order, a side dish to cut through the delicious fat with some acidic heat.

The Bacon Truck announced the brick-and-mortar news on New Year’s Day. The plan is to spruce the place up and open as early as next month, Williams says, and ramp things up with the patio and more offerings later this year. The Bacon Truck will continue its full schedule of events and services in 2018, and Williams says the company still wants to add another truck in the future.