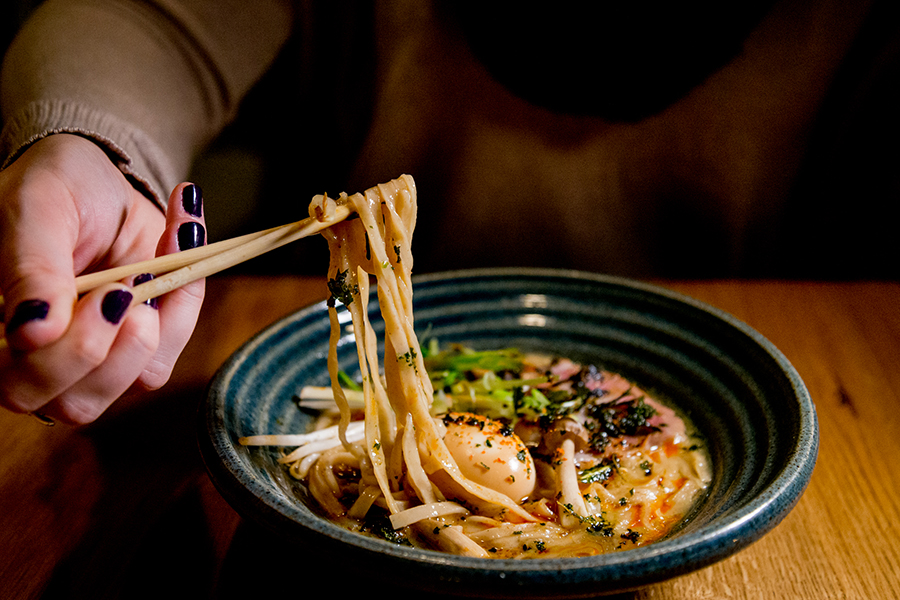 Nothing warms us up quite like a piping hot bowl of soup during a pre-snowstorm chill, and tonight, there are new “noods” to slurp in Jamaica Plain. Brassica Kitchen + Cafe begins Ramen Tuesdays on January 16, with a rotating range of house-made noodle bowls from chef de cuisine Matthew Hummel.

An alum of Tiger Mama, O Ya, Ribelle, L.A.’s venerable Animal, and more top restaurants, Hummel started at Brassica in June. He first dabbled in hand-making noodles while a cook at West Bridge, he says, with guidance from chef Mark O’Leary, formerly of Shojo and O Ya and a local noodle guru.

“I’m fortunate to have a grain mill at Brassica so I can mill Four Star Farms rye berries minutes before I make my noodle dough,” Hummel says.

The restaurant debut from the former Whisk pop-up chefs Jeremy Kean and Philip Kruta, Brassica’s daily and nightly offerings showcase an environmentally sound approach to sourcing, which of course includes local animals. It was the weekly pork delivery from Central Vermont’s Longest Acre Farms that led to the first ramen experiment, a tonkotsu broth. Tonight’s bowl is a duck shoyu broth, topped with with rare slices of duck and a soft egg.

“Chef Jay just butchered some bone-in pork shoulders, so next week will most likely be tonkotsu again,” Hummel says. “I eventually would like to try a brothless, mazemen ramen. Each week I just try and do something a little different and better.”

In other ramen news, Eater Boston reports today that the recently-shuttered Allston favorite, Pikaichi, will open a new location in Medford. And Oisa Ramen Slurp & Go—the brick-and-mortar debut from a pop-up chef who was fostered, in part, in the Brassica kitchen—is now open for lunch in downtown Boston.

Ramen Tuesdays at Brassica Kitchen are on weekly from 5:30-10 p.m., or until supplies last.